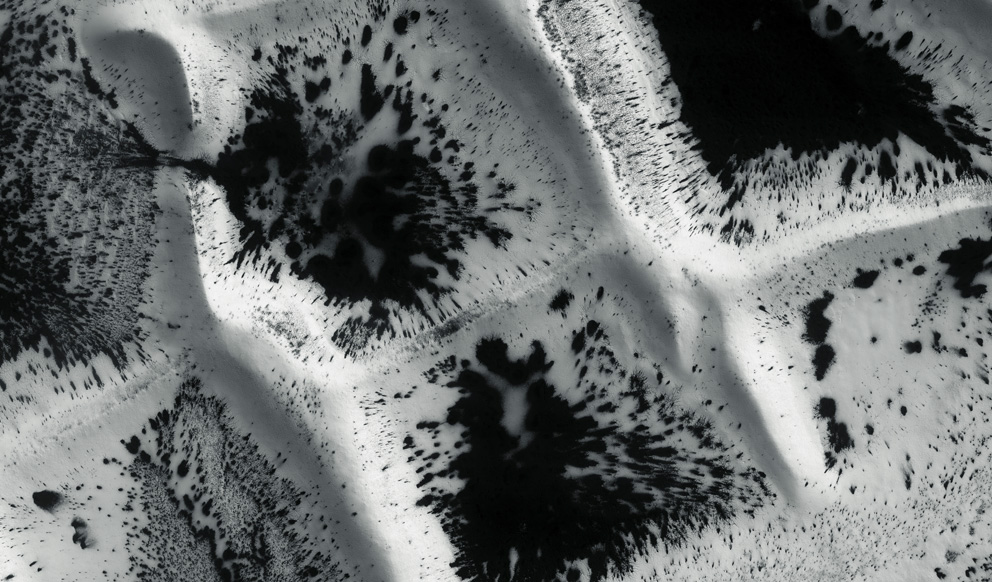 What we see is a world without vegetation. A wasteland of sand and rock. Lifeless, barren, empty and inhospitable. Stark black-and-white photographs of the surface of Mars, the fourth planet in our Solar System. On this surface we see ridges and rivers of lava, frozen there uncountable centuries ago. Steep, rugged crests and powerful, circular craters with sharp-edged borders. Shell-shaped mesas, sandy plains and scale-like eroded formations. Deeply cut ravines and river valleys full of dust. Tracts of land that, although they stretch for miles, look like miniatures drawn in the sand, zones crafted from spilt plaster or drifted snow, with solitary fir trees growing from them. There are expanses where the ground has become dried and cracked over an inconceivably long time, and everywhere intricate patterns formed by cosmic forces.

Shots from the most powerful camera ever sent to another planet

As observers, we are far away. We are not sitting in a rover, bouncing over the dusty ground in unknown territory. The eye we are seeing through is very large, and very still. It is looking down from a great height at a distant, alien land. The largest, most powerful camera ever to have been sent to another planet has a reflecting telescope with a diameter of 50 centimeters. It has been part of the “Mars Reconnaissance Orbiter” (MRO) since 2006, taking high-resolution photographs from an elliptical orbit around the planet Mars. The “High Resolution Imaging Science Experiment”, known as HiRISE, is designed to explore landscapes and rock formations and identify possible landing sites for future landing robots on the Red Planet.

Despite, or precisely due to, the fact that the camera can only map a few hundredths of the total land surface of Mars, the pictures are extraordinarily sharp and precise: “The camera takes shots that show us what our naked eye would see were we to fly over the planet about a kilometer above the ground.” Never have the mountains and valleys, craters and rock formations of our neighboring planet been as close as they are in this picture. And never before has it been clearer what fascinates humans so much about Mars: In looking at the surface it seems as though one can see the planet Earth in its early stages, possibly a world being formed. Whether this is anything more than pure fantasy, we do not know.

“Mars, a Photographic Exploration” is the simple title of the large-format book edited by Xavier Barral presenting the best of the more than 28,000 (in part color) photographs of the surface of our neighboring planet. It also features exact descriptions, explanatory texts, and a chronological summary of the history and scientific discovery of the Red Planet.

“After exploring the lava fields in the north, the sand dunes, the volcano dust-covered craters, the deep canyons and the melting polar ice caps – and all as a motionless explorer – I decided to choose from among the thousands and thousands of photographs one perspective and keep it consistent,” notes Xavier Barral in the foreword. “Each photograph therefore shows a stretch of six kilometers. At the end of the journey I had put together a collection of perpetual landscapes.” Every single black-and-white photograph shows an area six kilometers wide. And given that the color photographs show a smaller area, Barral decided to include only the black-and-white ones in the book.

The HiRISE photographs are first and foremost astronomical research documents. They provide significant data about the previous and current state of the planet Mars. Scientists at the University of Arizona in Tucson, where the image data are received from the orbiter and analyzed, were able to use them not only to study water-hardened rock seams and rhythmic stratification of sedimentary rock. Moreover, by identifying ‘hydrated minerals’ with the help of orbiting spectrometers, they were able to find traces of a once habitable environment, “in which life may have flourished, if there has ever been life on Mars”, says Alfred S. McEwen, head of the “HiRISE” project.

That is one thing. Fascinated and confused on account of the temporal dimensions, we follow the explanations Francis Rocard gives in his essay for the one or other formation: “The largest craters are known as impact basins, as this is where the crust has been penetrated right through to the mantle,” he writes. “They are about four billion years old, which means they are from the time of the so-called Late Heavy Bombardment.” Then there is “Kasei Valles”, the largest system of canyons on Mars, created by water erosion, which “spreads over a distance of more than 2,400 kilometers from ‘Echus Chasma’ north of ‘Valles Marineris’ to the lowland plain ‘Chryse Planitia’. At its mouth the channel system, which is named after the Japanese word for ‘Mars’, has a width of 400 kilometers.” And in the captions to the pictures showing what look like snowy landscapes, we read: “The seasonal layer of frost that covers these areas consists partly of frozen water, but mainly of dry ice, i.e., carbon dioxide that resublimes in the Martian conditions of minus 125 degrees Celsius.

The lure of uninhabited lands

To our human eye, however, something else is happening. The sober description transforms. What we perceive in the photographs morphs into a projection screen for our fantasies. The prospect that there is something, and no longer merely nothing, out there suddenly makes this lifeless world not only alien, but sublime. It is as though these formations are reminding us how limited our ability is to grasp cosmic events, both real and captured in these photographs. We are overcome, as Schiller would say, by a “mixed feeling”. What our senses perceive goes beyond our capacity for thought, and in this state of astonishment “woefulness” and “joyfulness” mingle.

The fact that Mars exists, as distant and as alien as ever, has a powerful effect on us, as our spellbound eyes take in the dry, barren and uninhabited valleys and plains. We cannot help but grasp that all of this exists without us having done anything. Not one human was involved. To stop us losing ourselves in the magic and mystery of that which exists without us, our eyes and our mind automatically begin building landscapes out of the distant, pure, untouched nature before us. We are like Petrarch, standing before Mont Ventoux. 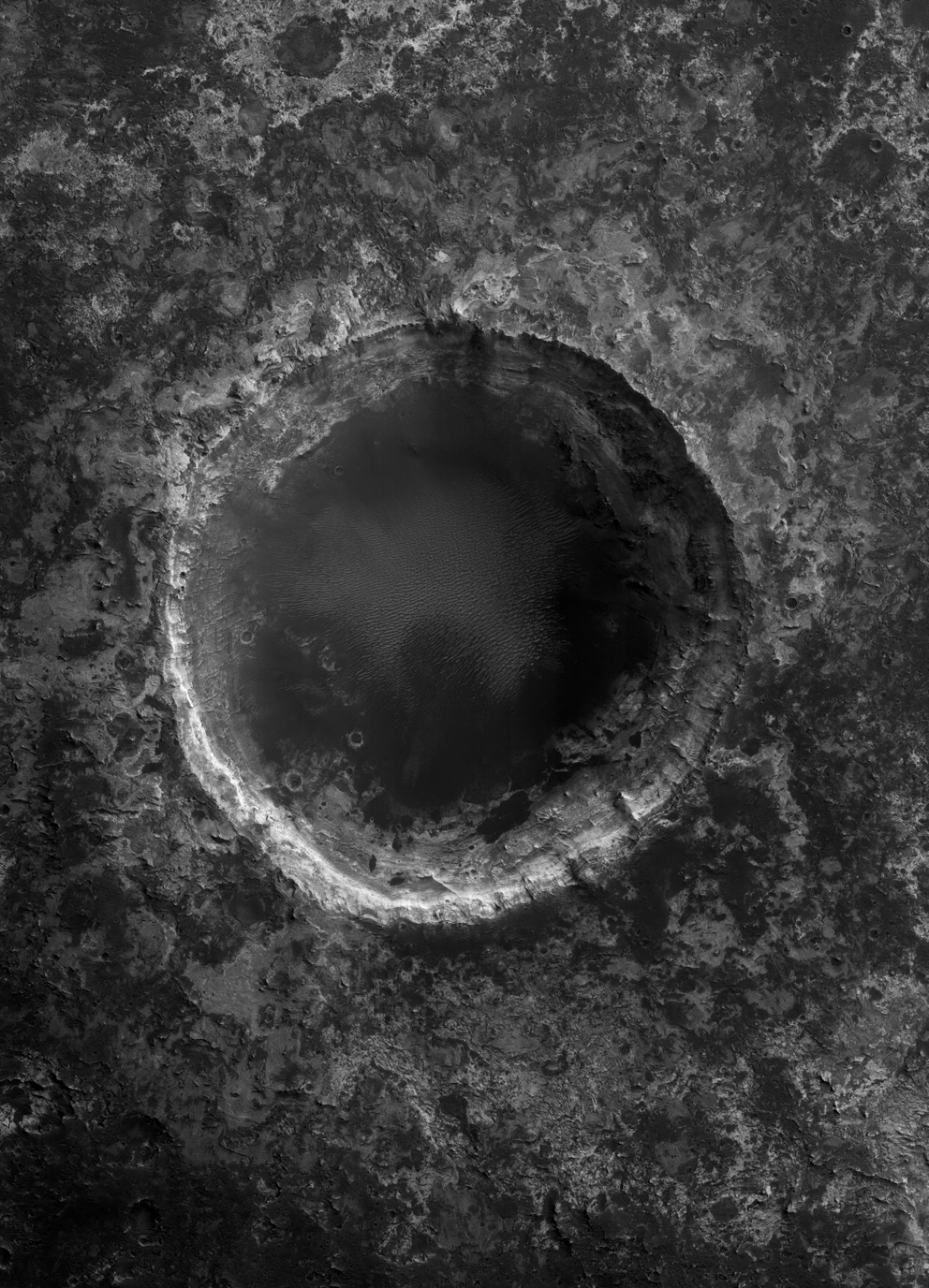 Meteor Crater in the layers of the high plateau by Mawrth Vallis. 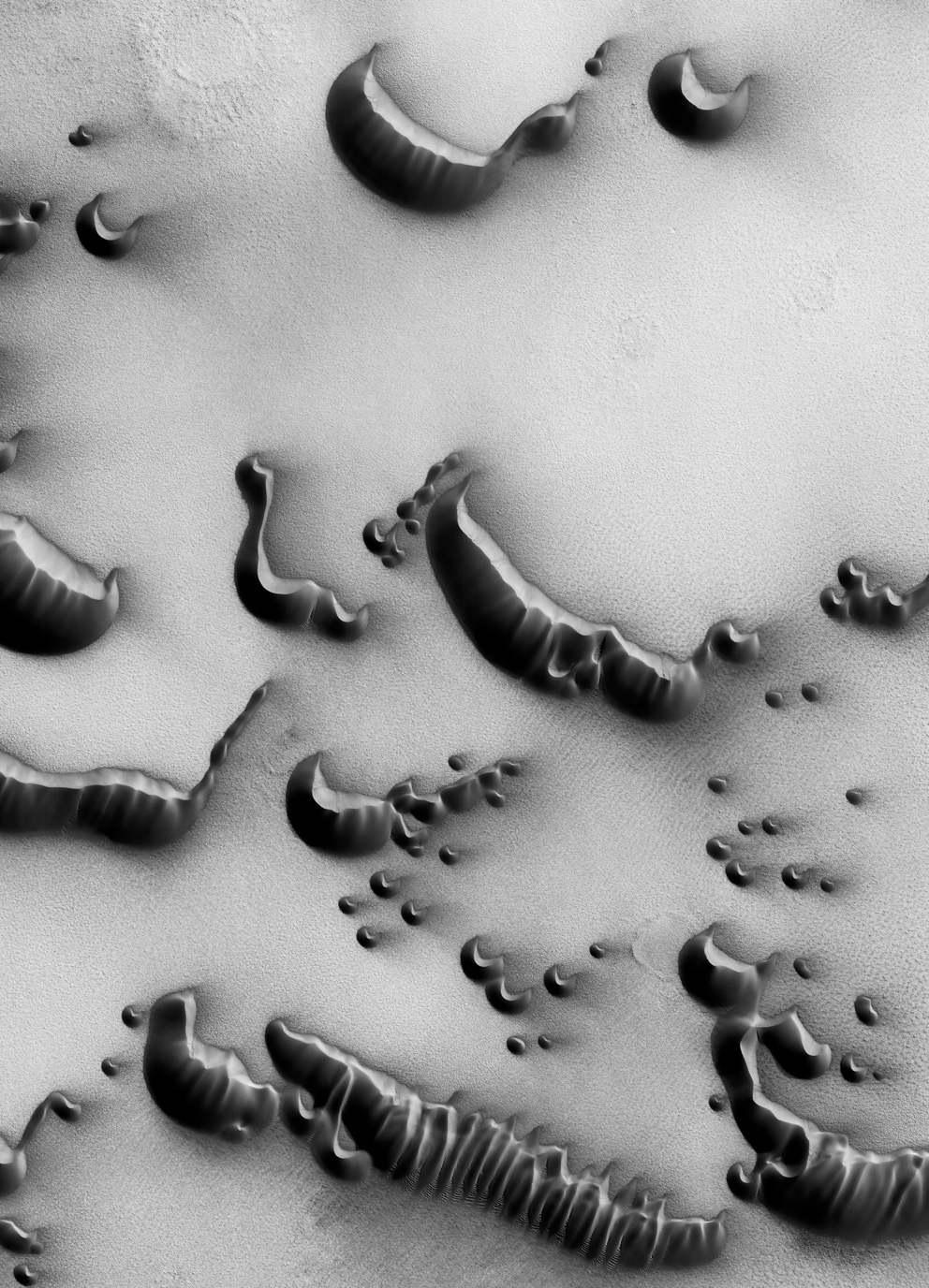 Barchans (dunes) in the region around the north pole, enlightened by the sun. 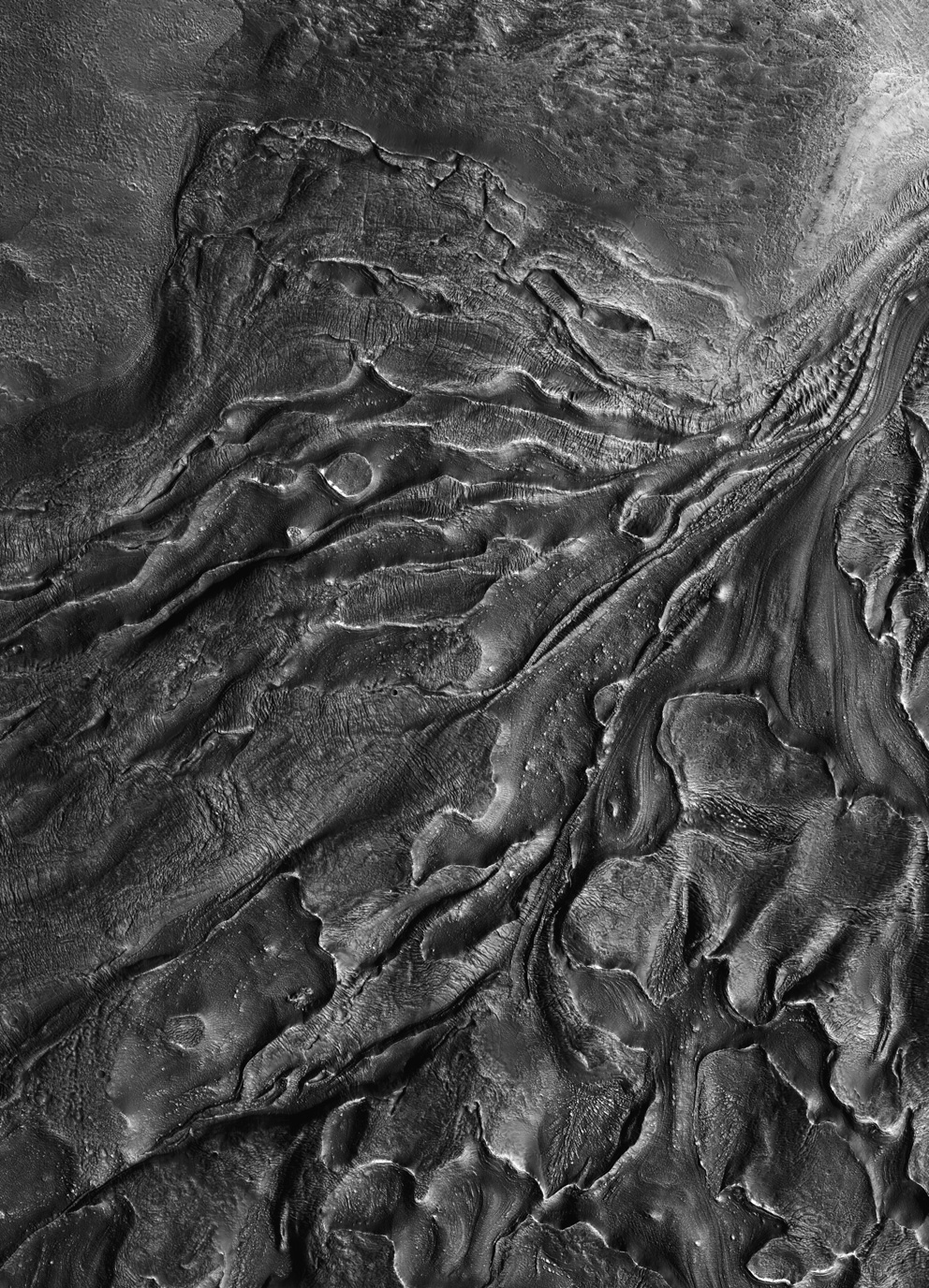 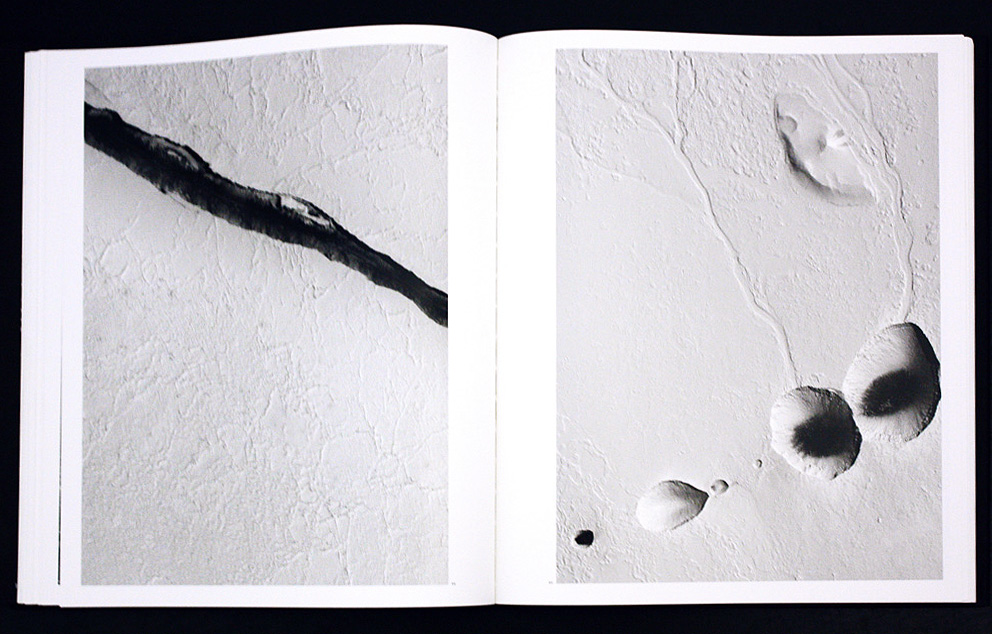 ”Amazonis Planitia”: The 100 Meter deep channels and excavations in a lava filed came from collapses. 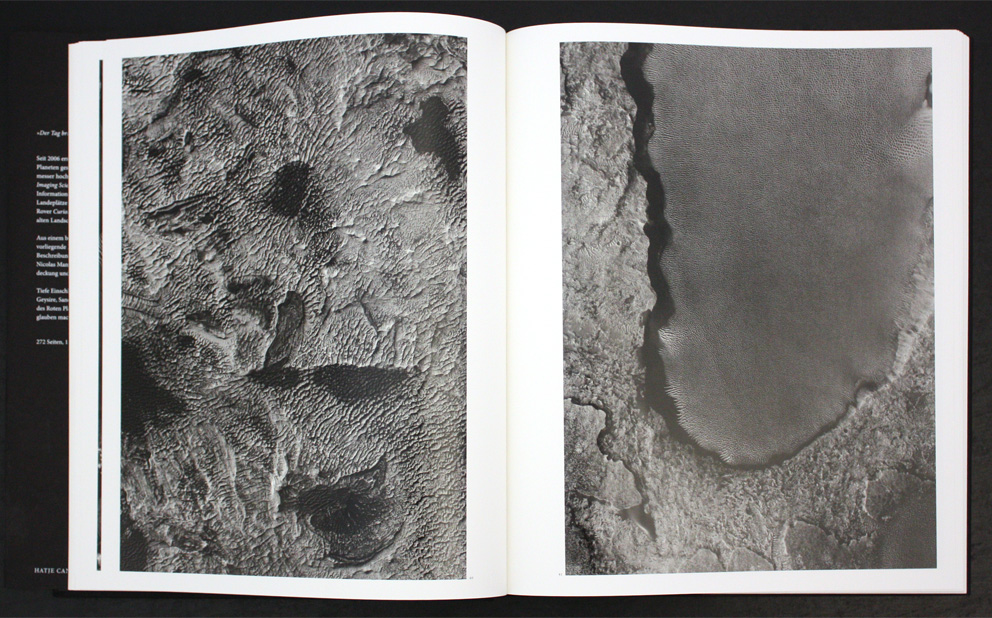 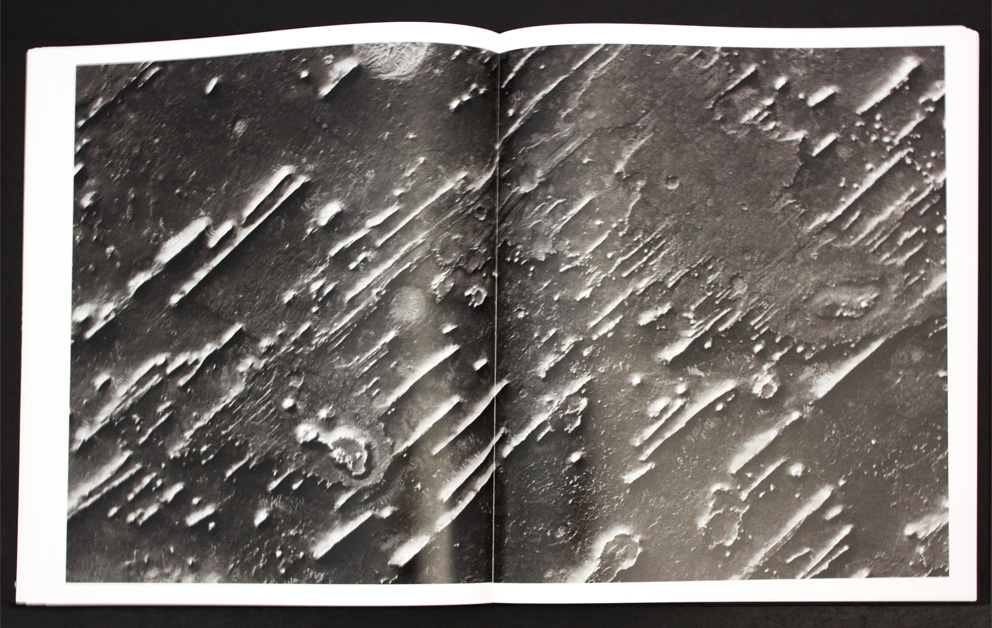 In the North of „Meridiani Planum“; the array of the edges could be made out of cementation of dunes or though solidification processes of liquids. 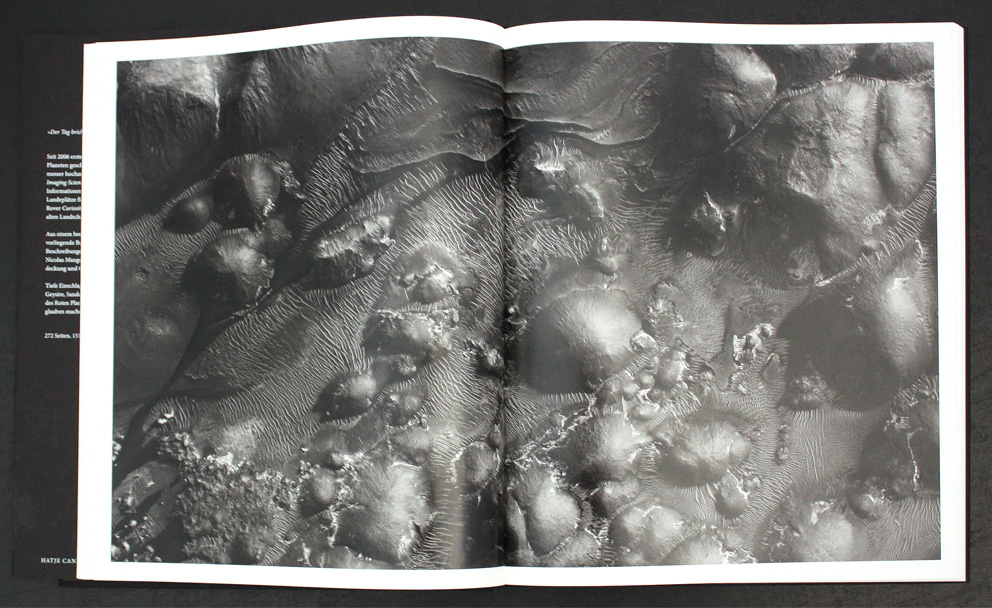 “Aram Chaos“: Between hills and dunes there are white fields which can be recurred to sulphate masses. 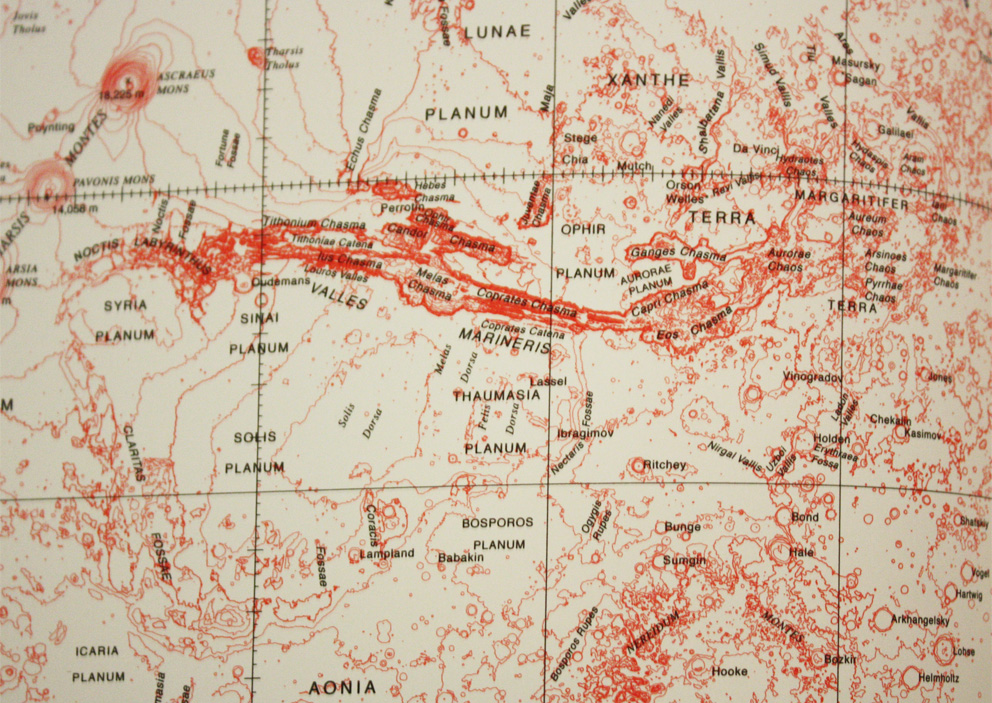 The planisphere of the Mars unveals its terrestrial origine. 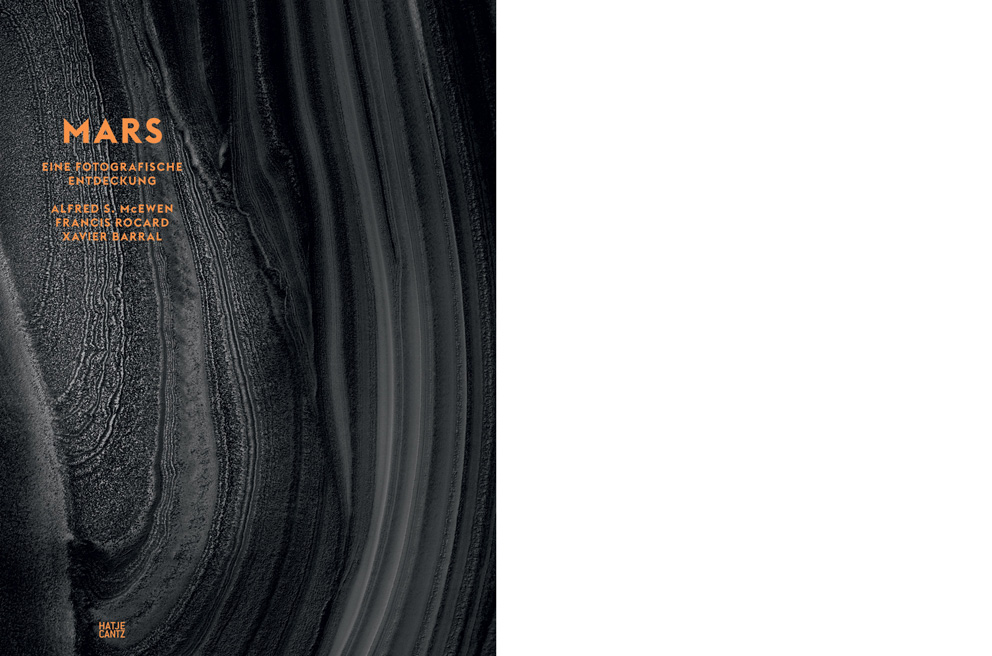 A view out of a high into a new, foreign world: ”Mars”.
Advertisement