Frits Loeb started production in his “Utrechtsche Machinale Stoel- en Meubelfabriek” (UMS) on April 13, 1913, with just a handful of carpenters. At that point, he could never have imagined that his company would reach such heights, becoming something like national heritage for Dutch furniture design; nor that he would one day have a museum exhibition dedicated to his work. “A company like Pastoe turning 100 is certainly a very special occasion,” said Konstantin Grcic at the opening of “Like Pastoe, 100 years of design innovation” at the Kunsthal in Rotterdam. “And we all appreciate the value of such a story.” What he is alluding to here is the appreciation that, in these times shaped by globalization and an “anything goes” attitude, is shown the sophisticated products of a relatively small design label.

The Rotterdam exhibition is housed in a large hall in the Kunsthal museum, which itself comes from the hand of the great Rem Koolhaas. And here the old adage “the clothes make a man” certainly rings true, for like the building that houses it the Pastoe show packs a visual punch without being overbearing: not too much design, not too much information, not too much to-do. What is Pastoe today? What has it been over the past 100 years? – And what does the company stand for on the whole? And it is these three fundamental questions that form the foundation for the exhibition concept.

In order to shine an unbiased light on the brand, the organizers felt it was important not to draw all resources for the anniversary show from within the company itself, but to engage creative professionals from elsewhere too. They went for architect Anne Holtrop and artist Krijn de Koning. Their task: to create a visual representation of the company’s extensive history and its intensive collaborations with renowned graphic and furniture designers in each of the respective eras (Dick Bruna in the 1960s, Shiro Kuramata in the 1980s and Maarten van Severen in the early 2000s). And the two of them certainly came through – and in a way that appears almost playful in its simplicity and remains all together non-doctrinaire.

Visitors are met with three different “buildings” to wander through. This spatial division corresponds to three thematic blocks. “Archive”, a black pavilion designed by Krijn de Koning, presents a compilation of furniture, paintings, publications and photographs from throughout the company’s history that is as original as it is interesting in its commentary on contemporary history. The “Environments” section, likewise designed by de Koning, boasts colorful walls with a series of openings that afford delightful perspectives and insights into the topic at hand, namely, Pastoe’s visions of the architectural space and a number of installations on the themes of “living” and “working”. Lastly, the “Innovations” section, designed by Anne Holtrop, presents a panoply of new pieces and ideas by Konstantin Grcic, Naoto Fukasawa and Claudio Silvestrin, to name but a few, all spread out among a landscape of thick, natural white felt mats.

Upon entering the exhibition, visitors are greeted by a large photo wall, a wonderful prelude to the exhibition that is as informative as it is impressive in its sheer comprehensiveness. A patchwork of chronologically ordered, black-and-white images creates a visual representation of the Pastoe’s company history and oeuvre. “We didn’t want to have too much information,” explains Anne van der Zwaag, who curated the show together with design critic and author Gert Staal. “Here, visitors are able to get a feel for the topic, then they can browse the pavilions at their leisure, come back to the wall later and take another look at the parts they found particularly interesting.”

The idea to present the furniture with its formal stringency and nothing more (surrounding it with unnecessary props would have simply upset the minimalistic aesthetic of the design) is certainly a winner. Instead, visitors make their way through a recreated room displaying an array of innovative furniture from across the periods, the fruits of high-quality craftsmanship, side by side – allowing for a direct comparison between them.

Aldo van den Nieuwelaar’s roller shutter cabinet “A’dammer” from the 1970s provides a particularly vivid example. The piece is characterized by a corrugated roller shutter that can be pulled up, disappearing at the back of the cabinet. This iconic design item is one of the bestselling pieces of Dutch furniture of all time. The “SM05” tubular steel chair by Cees Braakman and Adriaan Dekker, a child of the 1950s like the “Wire Chairs” by Bertoia or Eames, is also on show, as are the “Shift cabinets” by Scholten & Baijings from 2011. With “Outline”, Naoto Fukasawa has now created a filigree aluminum shelving unit for Pastoe’s latest collection. And Claudio Silvestrin, who (metaphorically speaking) said that we don’t allow culture in the form of books enough space, placed his “Prospettive” shelving system, which incidentally does take up a huge amount of space, in juxtaposition to the design by his Japanese colleague. “I like how they have presented the new side by side with the old here,” says Konstantin Grcic. “After all, things aren’t ordered chronologically in real life either. What’s more, it is an expression of confidence on the part of Pastoe that they have been able to bring together items of furniture that have never been seen together in such a way before.”

An anniversary always offers up a welcome opportunity to try out new things and strike up collaborations that don’t usually find a place in the day-to-day production business. This time they asked Dutch photographer duo Scheltens & Abbenes to document the true quality of Pastoe furniture. The outcome is a range of highly aesthetic, artistic pictures on display in the black pavilion, whereby the details of stacked-up cupboard doors or shelving are only recognizable as such on the second or perhaps third glance. Konstantin Grcic, who was particularly taken by the finish, i.e. the lacquering, of the Pastoe furniture, describing it as “exquisite”, placed two cabinets next to one another within Holtrop’s felt landscape, which had nothing in common but the almost identical color gradient on their doors. Above each of them hangs a monitor, playing short films depicting how each of the lacquered finishes was created: One is applied by a man with a spray gun and the other by a machine.

The color pavilion also features a room in which graphic design takes center stage. It showcases old Pastoe posters by Dick Bruna and the new exhibition posters by Dirk Laucke, a modern, tongue-in-cheek take on Bruna’s past style. The anniversary cabinet “Visions Elements jubilee cabinet” is likewise on display, which pays tribute to Pastoe’s former design director Cees Braakman and in the company’s 100th anniversary year once again demonstrates precisely what brought Pastoe so much renown in the mid-20th century and set it apart from its competitors, namely cabinets, shelving units and more cabinets. Perfectly crafted, flexible in their application and as reduced in their design as possible. Perfect understatement. 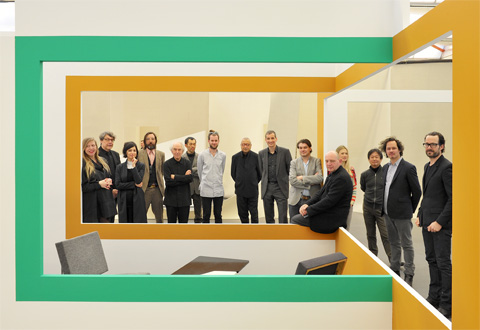 The team and the designers of the exhibition, Photo © Thomas Libiszewski 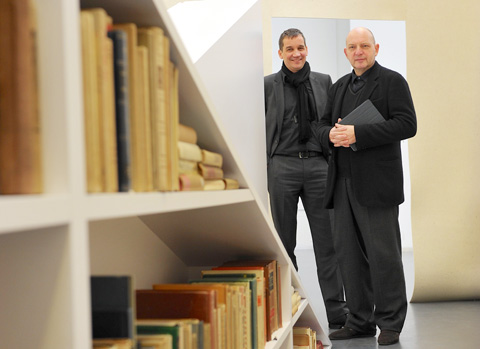 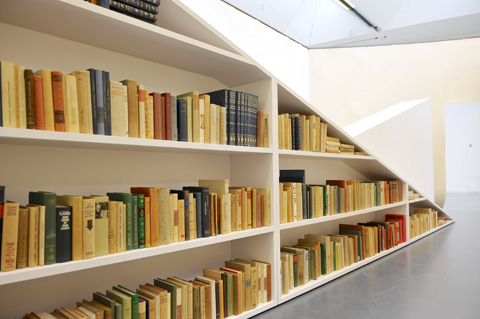 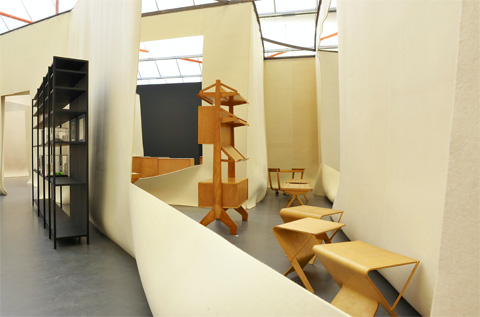 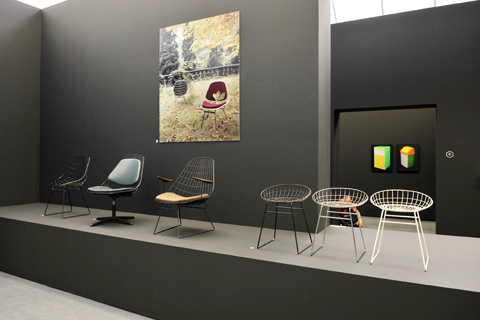 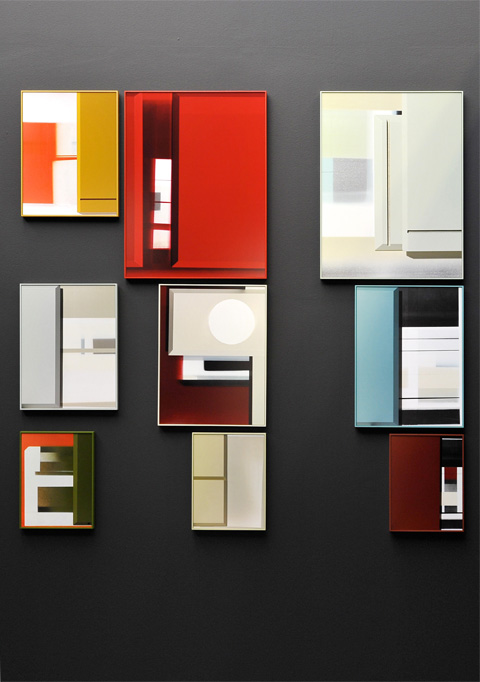 "Proposition Pass Through" by Scheltens & Abbenes from 2012, Photo © Thomas Libiszewski 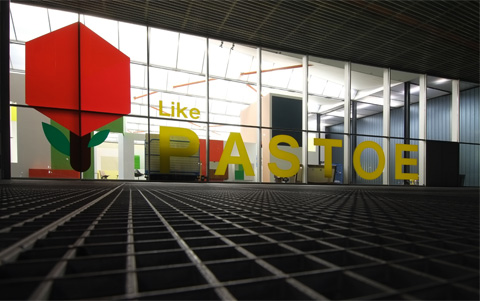 The Rotterdam exhibition is housed in a large hall in the Kunsthal museum, which itself comes from the hand of the great Rem Koolhaas. Photo © Thomas Libiszewski 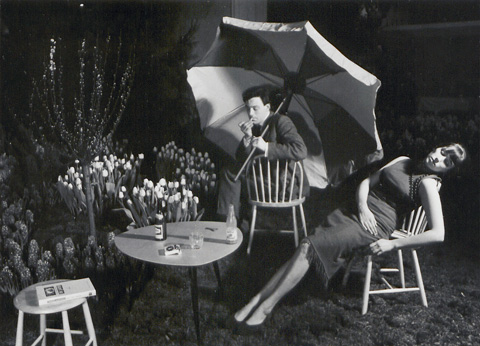 A patchwork of black-and-white images creates a visual representation of the Pastoe’s company history. Photo © Pastoe 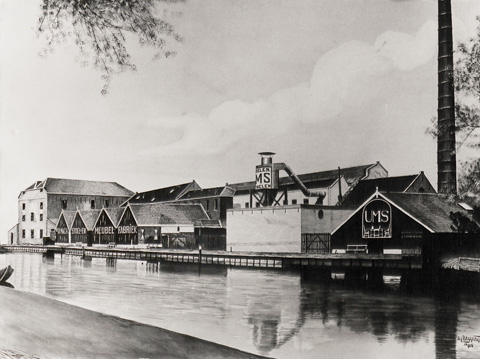 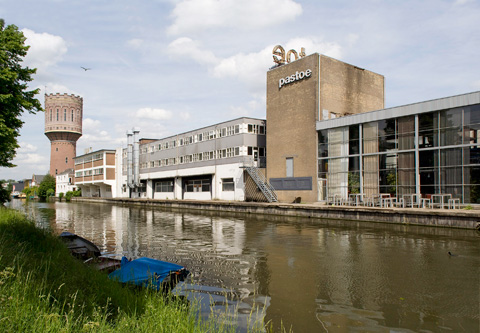 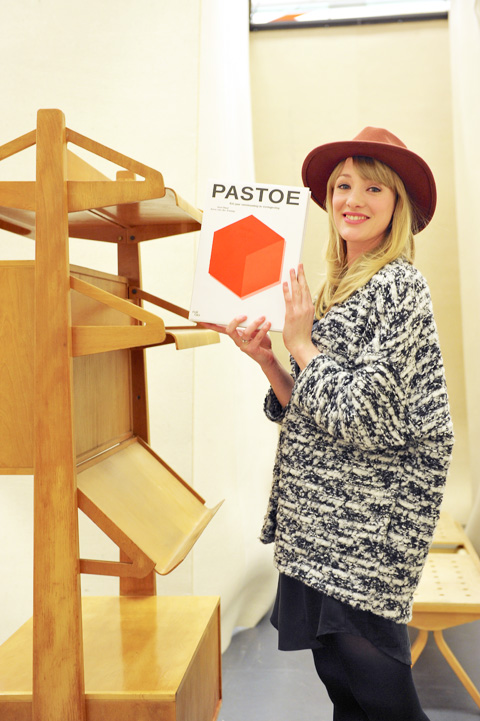 Noortje Herlaar at the Pastoe exhibition in the art gallery in Rotterdam. Photo © Thomas Libiszewski 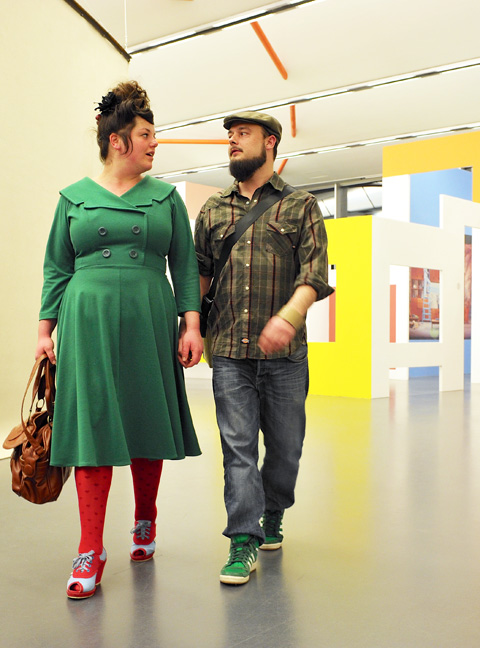 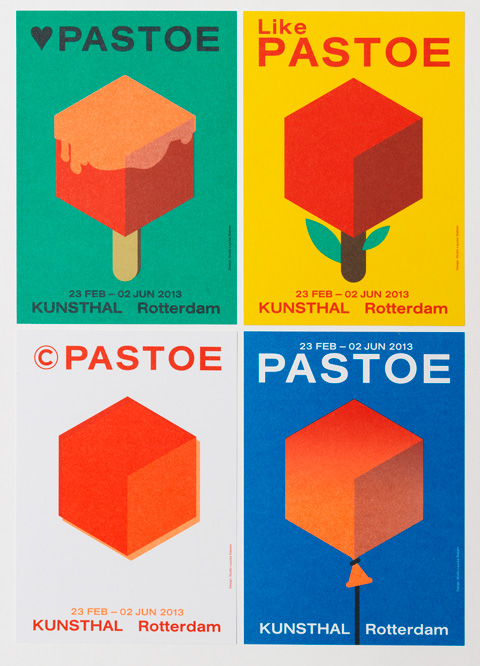 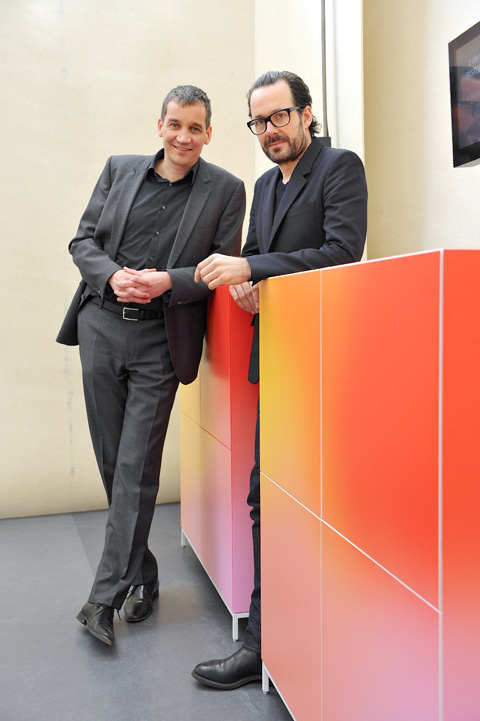 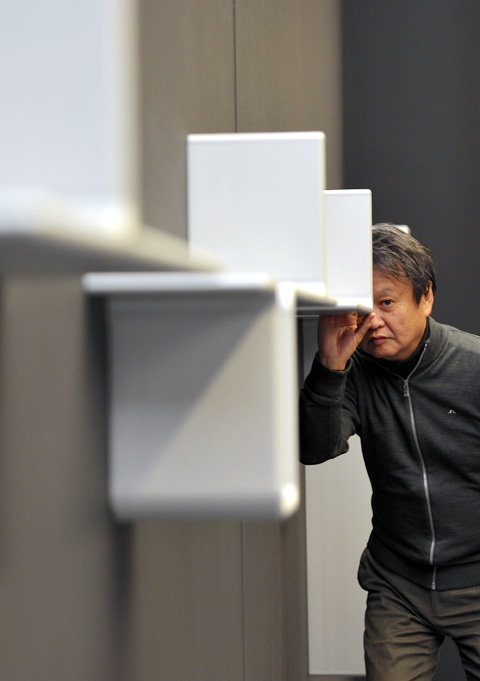 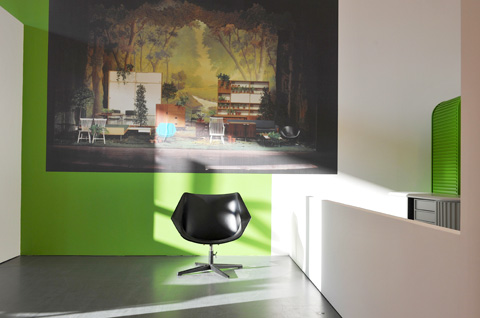 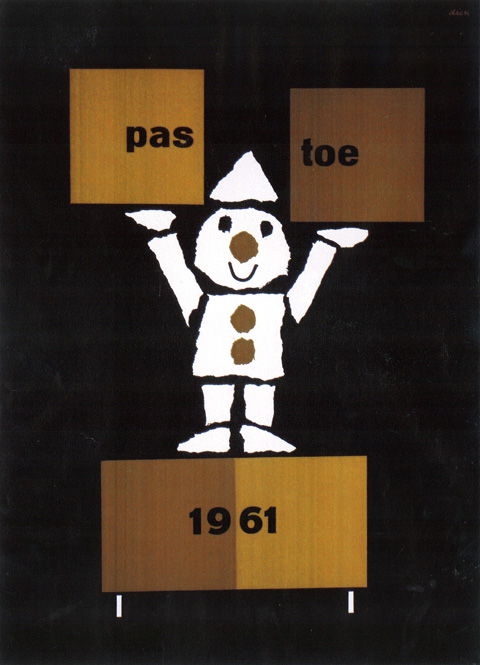 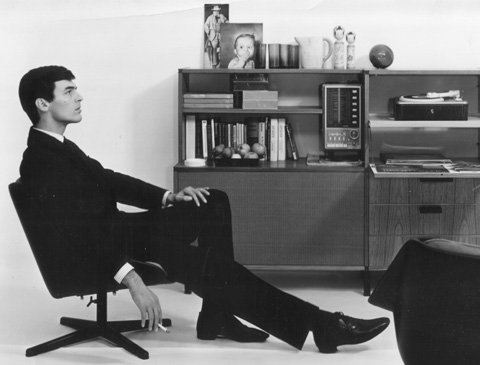 The teak furniture from 1962, photo © Pastoe 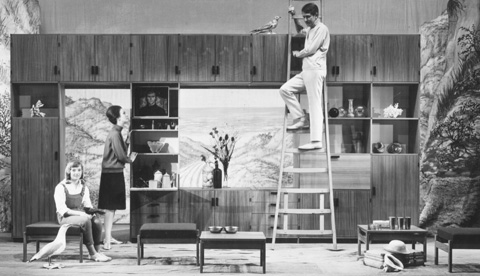 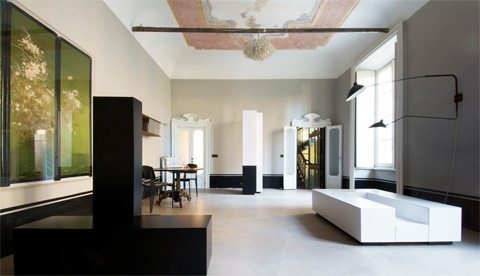