top
The barkeeper and the penguin
Commentary by Jeremy Gaines | Jul 11, 2016 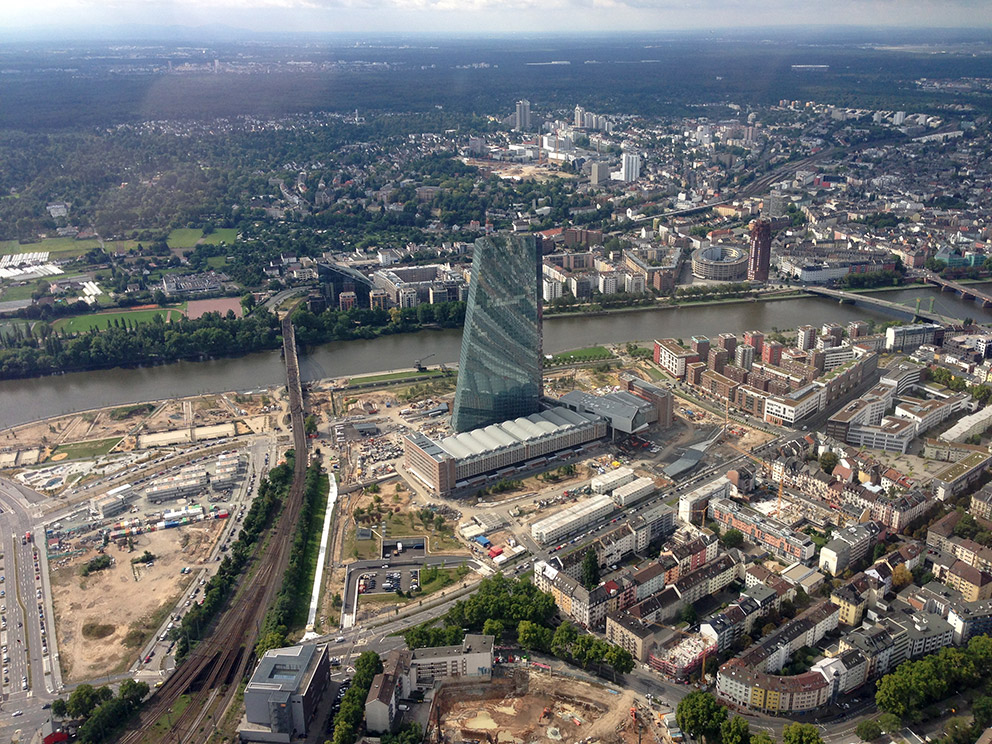 Some 2,000 new apartments are being built around the European Central Bank ECB along Hanauer Landstrasse – in the Honsell triangle. On the opposite side of the river, in Sachsenhausen, higher densities have long since been achieved. Photo © Adeline Seidel, Stylepark

If we were to take the sum of the political positions, the Frankfurt coalition of Conservatives, Social Democrats and Greens should actually be read as constituting a firm commitment to all three aspects of sustainability: economy, equality and ecology. At first glance, with its 2,477 lines the “Coalition Agreement” seems to be immensely detailed and cover all the bases. Many city decisions depend on state or national policy and lie far beyond the ambit of the City parliament. However, where it definitely can impact on our lives is in which areas get developed, how we citizens get to work, and how we spend our leisure time. The Agreement signatories were clearly aware of this when they wrote: “Our growing Frankfurt calls for a socially and ecologically responsible urban development that delivers sustainable growth and ensures all Frankfurters a good life in their city.” That ticks all the ideological boxes, but does the Agreement actually outline a viable path for the future?

A lot of lines are devoted to housing, to be driven by the City Planning Dept., responsible for the integrated urban development concept that will include assessing additional housing potential in the city. This study will include areas to be converted into residential zones, careful creation of greater densities, and unbuilt areas. The laudable intention: to help take the strain off existing quarters by providing additional housing and dampen rent price trends.
The politicians dress all this up in grand language, speaking of “new, vibrant quarters”, adding that city-owned housing will have a welcome rent cap and there will be “statutes to protect existing usages”.
They rightly say the new housing (184,000 units by 2030) can only materialize if the public transport network is expanded beforehand and the social infrastructure (childcare centers, schools and sports facilities) is already in place. Yet, while wanting to avoid the mistakes made with the Riedberg district (where transport and social infrastructure were tacked on like afterthoughts), they consistently ignore one thing: They don’t have the space! In fact, the Agreement fails to mention the ‘where’. It simply states that “city and country aren’t opposites for us. We will build new quarters that are suffused with greenery and urbanity, with … nature-like green areas.” Woe betide those who think this in reality spells flower tubs and trees encircled by asphalt. Reading between the many lines, one can only surmise that new zones will eat into the surrounding countryside.

Meaning agricultural land will get sacrificed. But the coalition says elsewhere it wants to preserve agricultural land. Leaving us to conclude that either the different sections of the coalition Agreement were written by different people who did not consult each other, or the left hand consciously ignored what the right hand was doing. Why are citizens not being openly and honestly told that green spaces in residential districts must be transformed if the city is to continue to grow?

The election to the Frankfurt City Council in 2016: Changes in votes compared to the 2011 elections – Greens (on the l.), CDU (center) and SPD (right). Graphics © Bürgeramt, Statistik und Wahlen / Frankfurt am Main

Onwards and upwards? Hotter or flatter?

The Agreement prioritizes housing by “adding stories, building on empty lots, converting empty offices into housing and enabling higher vertical usage in suitable zones”. One can only recommend that the signatories actually count how many buildings can be added to or ask an architect whether offices can straightforwardly be converted into homes (open-plan living with no showers?). If we are not talking expensive residential high-rises, since there is to be no exclusion of existing tenants, what are we talking about? Possibly not 184,000 units in the city. After all, suddenly a line gets sneaked into the document saying that when push comes to shove “covering the housing requirement is only possible in cooperation with the region”.
As regards the ecological side to urban life, the Agreement rightly states that large parts of Frankfurt are threatened with excessive heat owing to climate change. The coalition has therefore committed €10m over 5 years to removing blacktop and adding greentop; the funding will be used to green roofs and courtyards and support 100 innovative projects with sun-sails, pergolas and drinking fountains. All most welcome, but possibly window-dressing if you have just created greater densities and insisted on “activating and developing commercial zones specifically for industrial usages”. Or maybe here the left hand has noticed what the right hand is doing after all and is trying to compensate for it. 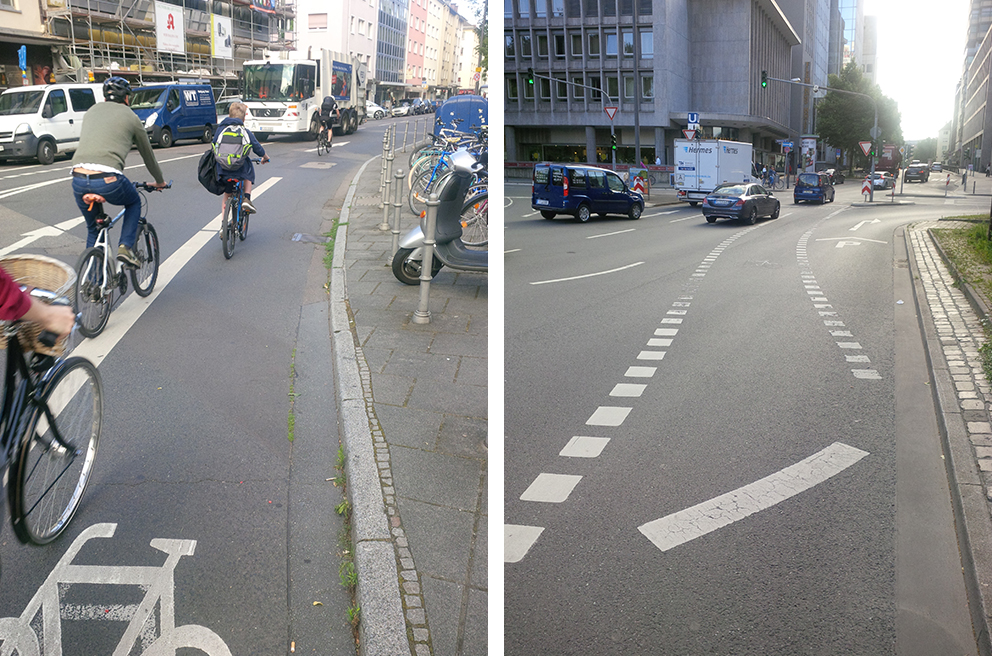 On the l.: The morning rush – safety in numbers? The corner of Eschersheimer Landstrasse/Grüneburgweg. On the r.: All that helps here is to hope: the transition from Hochstrasse to Bleichstrasse. Photos © Jeremey Gaines

New transport methods – which are?

We all know that wanting the best of both worlds is a tall order, especially when it comes to Berliner Strasse. The coalition says it will champion Frankfurt as a business and tourism hub – but it wants to keep the four-lane Berliner Strasse the way it is, a classic post-War traffic artery that cuts the tourist sites off from the pedestrian shopping zones. Is this forward-thinking transport planning? One of the authors was evidently worried and therefore said: Let’s add a cycle path along the Berliner. Great idea! And where? Perhaps above the ground?

Cycle paths are very much in and the Agreement strongly favors them, intending to ensure they are “safe and conflict-free”. It will prioritize cycle lanes on roads and moreover “clearly mark them, possibly even giving them a different color”. In practice this is shocking nonsense, of course, and is exactly how you make sure daily cycling is not safe and conflicts are pre-programmed into planning. Have the three coalition parties possibly never traveled around other European cities and seen what they have done to achieve this goal – Amsterdam, Copenhagen, and London, for example?
Public transport is mentioned – yes, the City is in charge of it. But do the high ticket prices (on a German average) get discussed? Only as regards lowering them for senior citizens. There’s talk of assessing a streetcar ring-route and new streetcar stops and the like – but the price tag of such will be well beyond the city’s treasury. Like many other things discussed, the focus is again on assessments, not on realities on the ground.
It is a similar story with cars: The Agreement seeks to improve car parking without reducing the volume of parking spaces or traffic. But quite how public spaces will be made more appealing, pedestrians and cyclists supported and “incorrect parking that endangers traffic” reduced without scaling back the volume of traffic is anyone’s guess. Perhaps by the left hand drawing a circle, and the right hand a square? 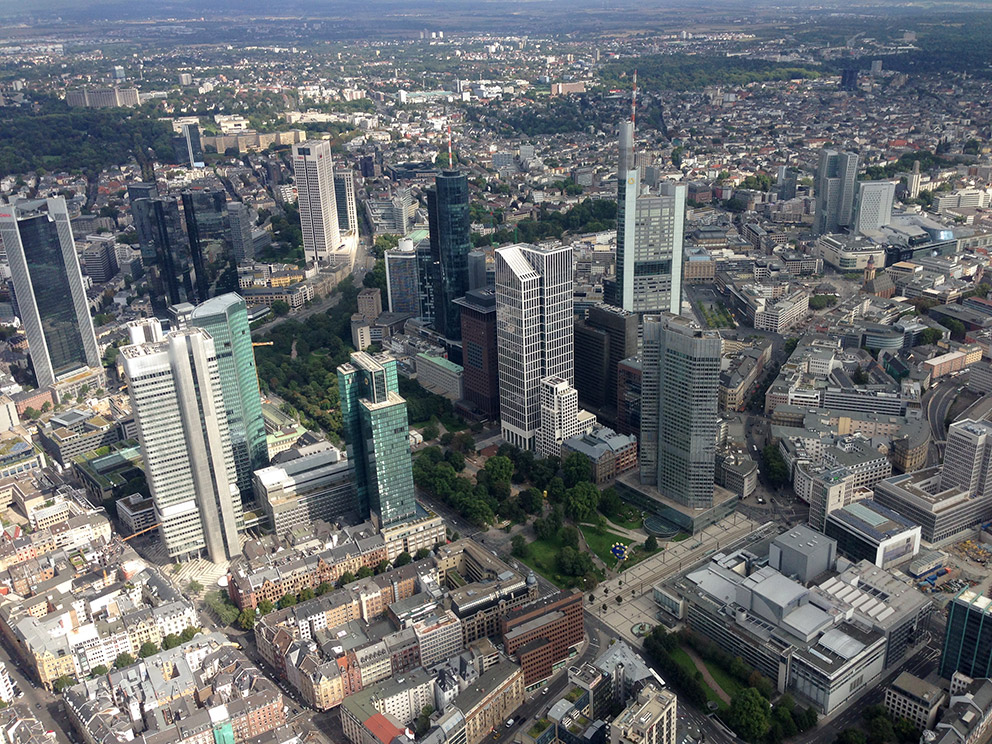 Space is getting tight in downtown Frankfurt: View of Gallusanlage, which runs round the inner core of the city as the now green old fortifications and of high-rises such as the Silver Tower (front l.), the Trianon and the two Deutsche Bank towers (rear l.), Opern Turm (rear r.), Maintower, Commerzbank Tower (r.), Taunusturm and Eurotower (front r.). Photo © Adeline Seidel, Stylepark

New culture for all – well, for the kids

However, there is one mind-boggling transport revolution heralded in the Agreement: One Sunday a month in the summer half-year, or a total of max. six times a year, the city will be declared a car-free zone. Albeit subject to the proviso that all three parties can agree on the area affected. Possibly these Sundays, it is noted in the Agreement, are to serve the “culture for all” agenda (meaning access to cultural offerings and education), meaning for all strata of society, and specifically for kids. A youth art college and a children’s theater are on the drawing board as well as a plan to make entry to museums free for kids in future. On the subject of museums, the Weltkulturenmuseum’s current lack of space is to be revisited and a central warehouse for the museums considered. Any mention that our culture should be international, that Frankfurt is an international city? No, just that innovation and creativity will be supported to make Frankfurt a cultural lab – “again” – by promoting in particular the free scene.

Offenbach/Main, remember, is being touted in the German Pavilion at the current Architecture Biennale in Venice as the example of how open-mindedness can drive a city, but the Frankfurt coalition talks mainly of international in the context of the airport, security, sports and the labor market. So how to create a cultural vision for a city where 28% of the population have foreign roots, and therefore “for all”? The Agreement doesn’t say, which is surprising if one remembers that the new Deputy Mayor in charge of Culture, Ina Hartwig, considers “one of the greatest challenges to Frankfurt cultural policy being to build bridges to the refugees”. Culture, well culture of course includes the zoo, and there the big news is: The coalition wants to build a penguin house.
Which is fitting. As it reminds me of a joke: A penguin walks into a bar, walks up to the barkeeper and asks: “Have you seen my brother?” The barkeeper answers: “No. What does he look like?”

It is hard to imagine the barkeeper would be able to distinguish between the three political parties who formed this coalition Agreement either. For a city forecast to continue to grow swiftly (and perhaps even more swiftly if the banking sector does indeed grow following the Brexit) and already suffering from a severe housing shortage and traffic congestion, the issues addressed in the Agreement are dumbed down to the lowest common denominator, to “same, same but different”. Sadly, the coalition has missed the opportunity to envision a sustainable future Frankfurt. Instead the political penguins have dished up a document riddled with serious internal contradictions that are simply ignored. 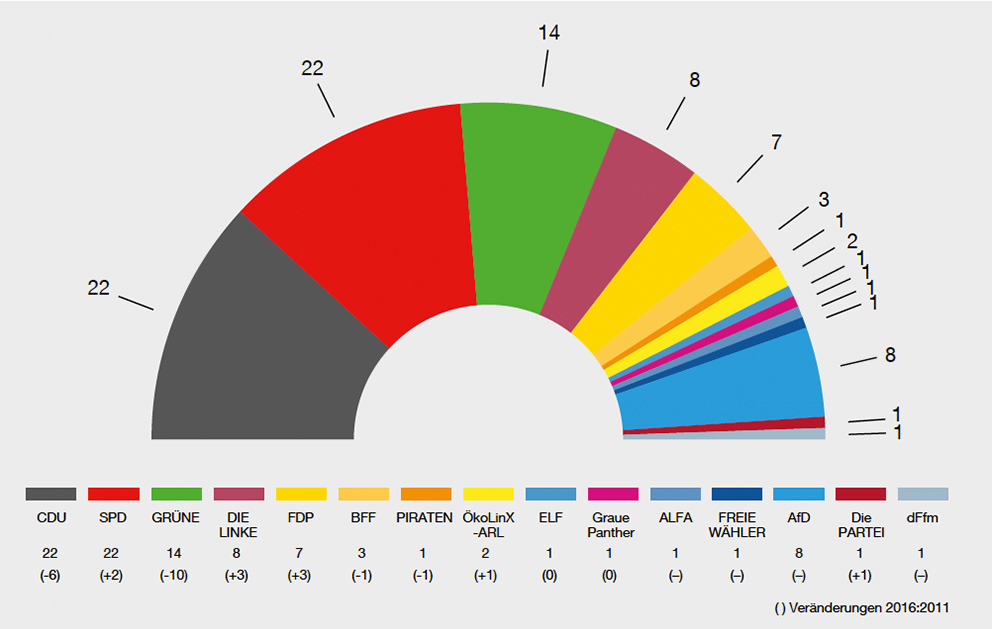 In the overview: The new distribution of seats on the Frankfurt City Council. Graphic © Bürgeramt, Statistik und Wahlen / Frankfurt am Main 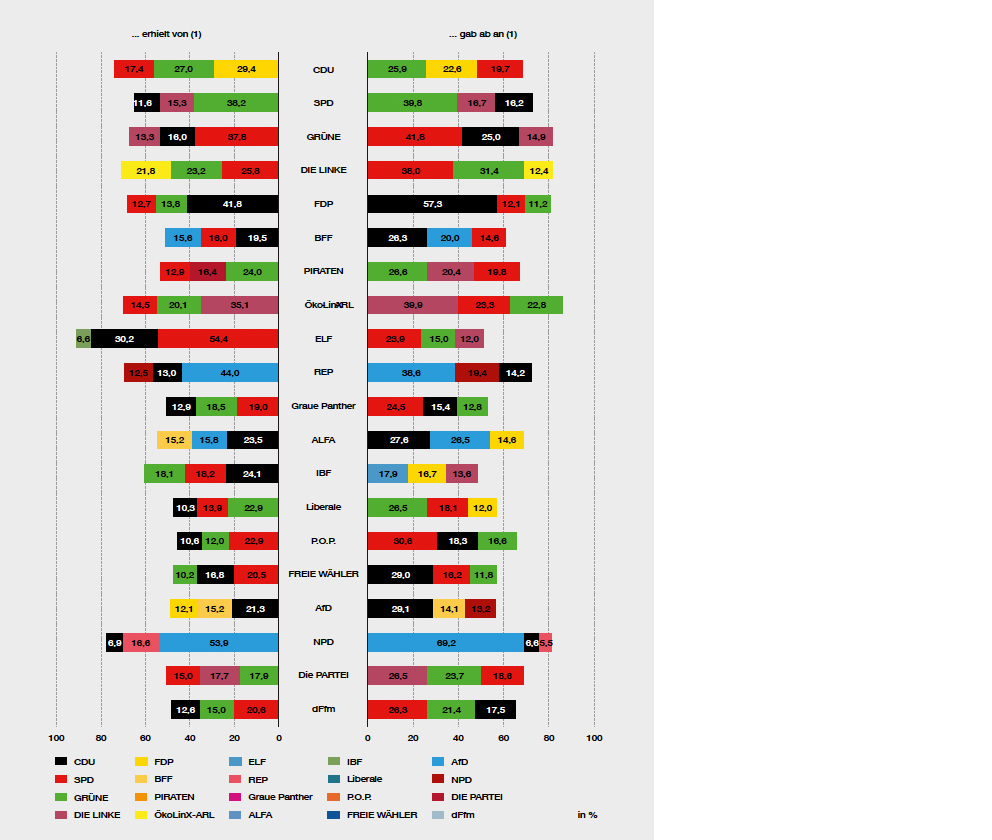