Not long ago living spaces were mostly outfitted with furniture. However, the tradition whereby sofas and easy-chairs, tables and chairs, shelves and sideboards, parquet flooring and carpets, textiles and luminaires made up what was considered good interior design has long since been outdated. The most recent to prove their aspiration to set current design standards, which extend into large parts of living space, were the kitchen manufacturers at "Living Kitchen", the new spin-off at imm Cologne. Now also the bathroom is giving up its habitual nooks and ancillary spaces, breaking old-established boundaries and is set to reinvent and penetrate into the home. At ISH Frankfurt, the "world's leading trade fair for the bathroom experience, building, energy, air-conditioning technology and renewable energies", living spaces become hybrid zones for relaxation and rejuvenation, self-expression and well-being. "The bathroom is the new living room" the Süddeutsche Zeitung daily quipped in its economic section. But what drives bathroom designers and manufacturers of bathroom fittings, bathtubs, showers and basins to advance into new living areas and expand within the apartment?

One possible solution has been proposed by designer Tom Dixon, who is cited in Peter Richter's new book "Deutsches Haus - Eine Einrichtungsfibel" (The German house - an interior design manual). According to Dixon, there are only two places in any apartment "properly suited to introduce ‘new technologies and innovative design solutions'. One is the bathroom, the other the kitchen." There is no better place to "have a good brag about the standard of technical equipment than where millions of pipes and cables come together and the two great taboos of human activity, the preparation and excretion of food, are prettily disguised with tons of stainless steel and high-tech appliances," says Richter.

So let's get out of the shower and enter the free stage of urban worlds of living. Two years ago, Patricia Urquiola with her bathroom design for Axor/Hansgrohe already gave us an idea of what this might look like. Similarly, Ludovica and Roberto Palomba staged with "Faraway" for Zuchetti/Kos the bathroom as a homely comfort zone. Both trailblazing projects present the bathtub and fittings as standalone elements that dominate the room. In terms of floor plan, they divide the bathroom up into different zones, whereby washstands and bathing zone meld with the sleeping area. Only the toilet remains a separate space, albeit one that has had a fundamental technological makeover.

The shape of the new sanitary objects has taken its cue from historical paragons. The standalone, sculpturally designed bathtub featuring a raised backrest is simply a must. And immediately reminds visitors to the trade fair of Jaques-Louis David's 1793 painting "The Death of Marat". What but the subject of a political insurgent of days past would better epitomize the bourgeois bathroom revival!

From the standpoint of technology and design, individual standalone objects were long considered a thing of the past. Large surface areas make freestanding bathtubs difficult to insulate, for example. But today the invisible installation technology of the 21st century is forging new connections with the formal vocabulary of previous eras.

That said, taking a bath in a cozy and comfortable environment is by no means a revelation. "In days past, the bathroom used to be mobile," writes architect and cultural critic Bernard Rudofsky. "If the living quarters lacked a proper bathroom, people used to place a vat in the living room, which was then filled with hot water from pitchers." This was plainly an arduous and time-consuming task. Today, it is no longer the preparation of the bath that requires work - after all, well-functioning water supply and disposal is seen as God-given in today's Western world - but cleaning the equipment after use. The extensive surfaces of standalone objects would again increase the workload. A fashionable bathroom complete with extra-fine finishes, with receptacles, fittings and accessories requires intense care and attention, which takes up far more time than any bathing, washing, grooming or showering procedure.

The tried-and-tested method of bundling water supply and disposal lines and running them through the center of the building appears to have become obsolete. "Get away from the wall!" dictates the Association of the German Sanitary Industry. Simple and practical simply suffices no more: "The bathroom user," reads one of the Association's articles on future bathroom design, "no longer wants some functional box that in the smallest possible space meets basic requirements ergonomically, but envisages a space suited to a range of activities in an intimate setting: a room divided into different zones, able to serve the maxims of hygiene, sensual body care, fitness, styling or spiritual and physical rejuvenation." Following the example of individualized car buffs they started - albeit at another level - the project "Pop up my bathroom".

To simply reduce the new passion for homely bathrooms to the likes of an advertising campaign staged by the sanitary industry in order to hike up costs and effort for bathroom planning and usage, would nonetheless be short-sighted. If we consider the displays at ISH's trade fair stands instead not as a newly prescribed design, but as an inspiration, the advance of the bathroom towards the center of the home and thus the center of life can no doubt have a liberating effect.

In this case, strategic planning would rely even more on products that are easily comprehensible and self-explanatory. On technology that makes sense also beyond the shiny surface. ISH presents some examples here. Perhaps the time has come for design to ask more questions again, to somewhat liberate itself from the dictates of marketing. In an ageing society, for example, it should insist that products and services are accessible for all. Such a design would not simply be an empty gesture but a powerful force that could make itself useful. 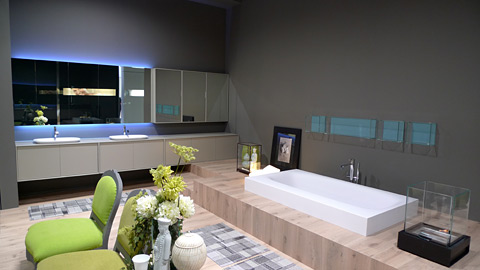 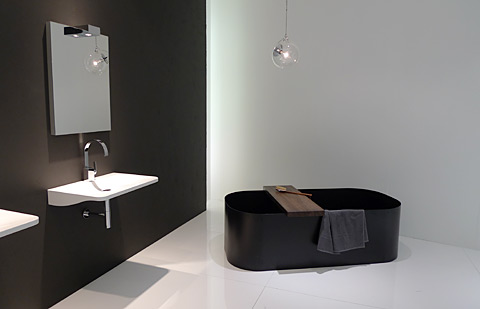 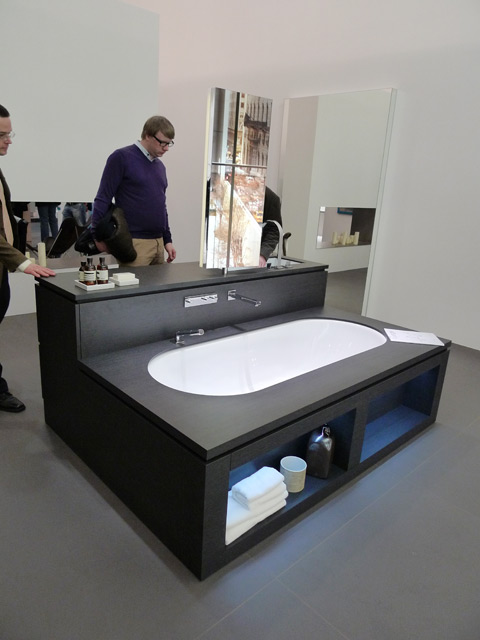 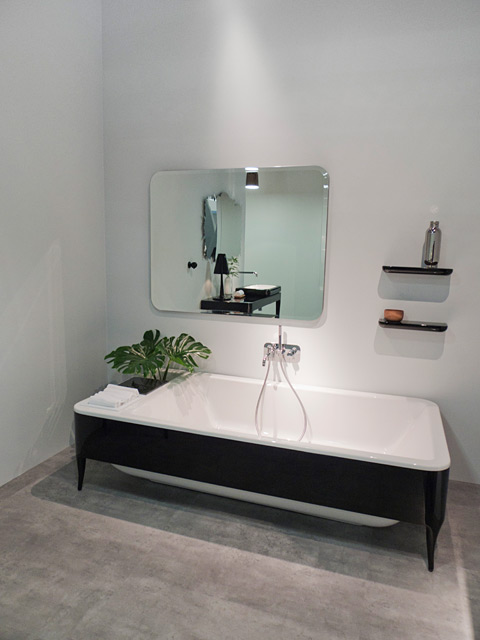 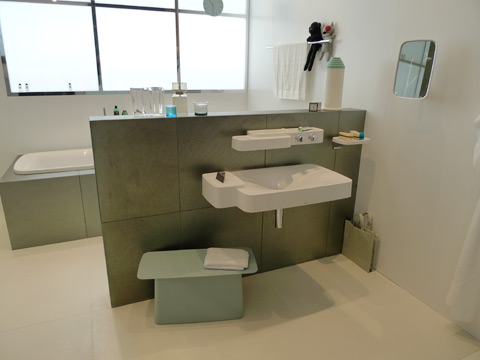 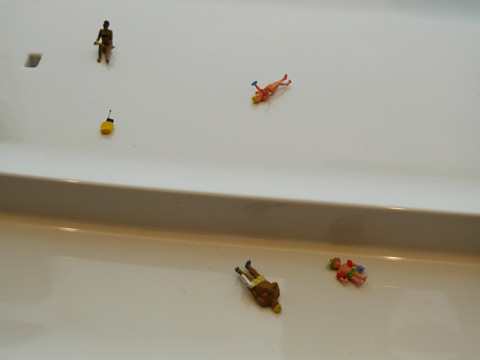 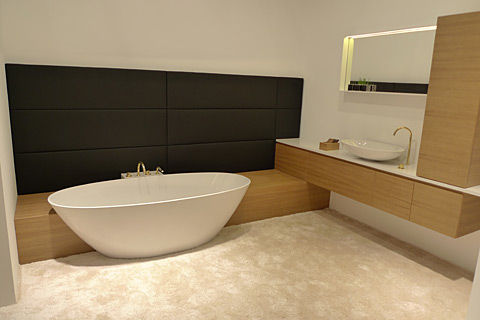 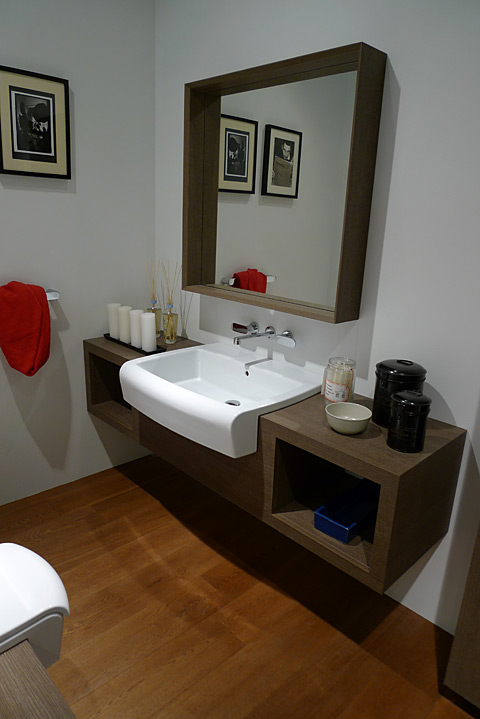 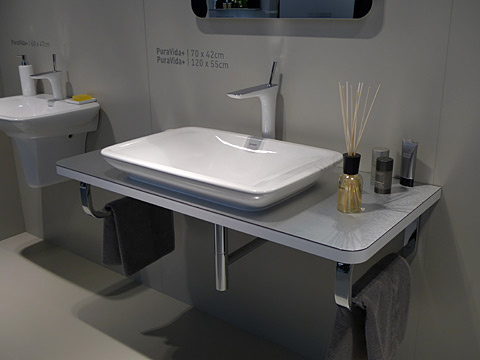 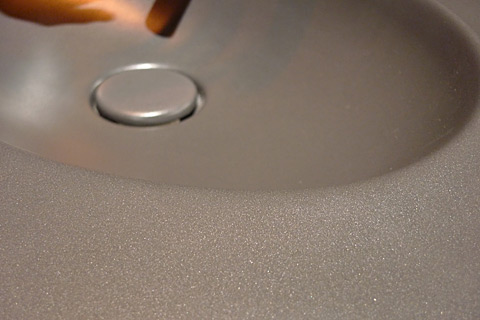 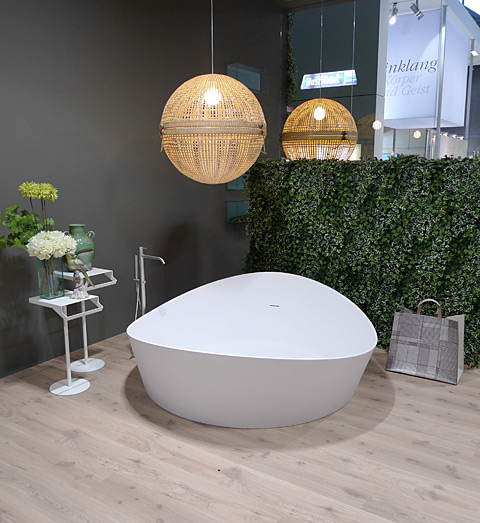 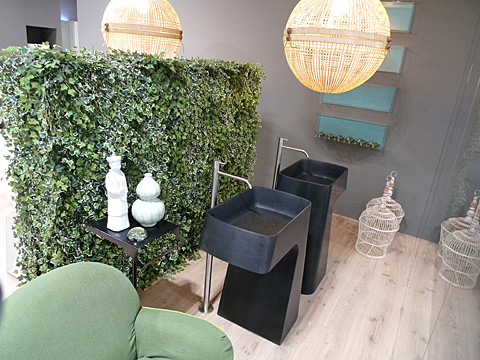 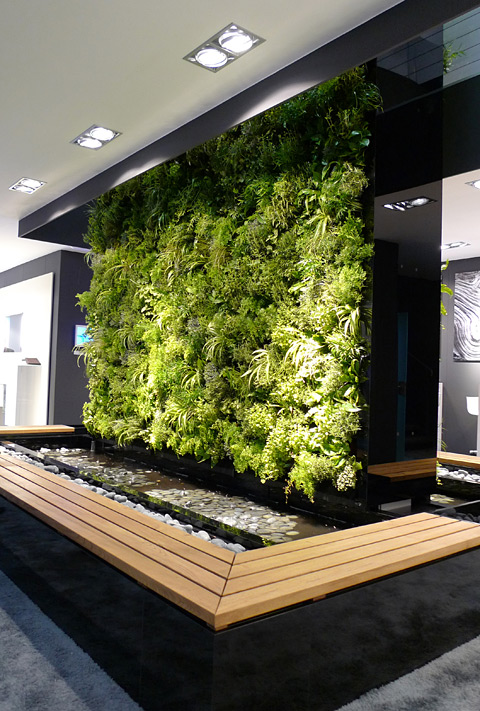 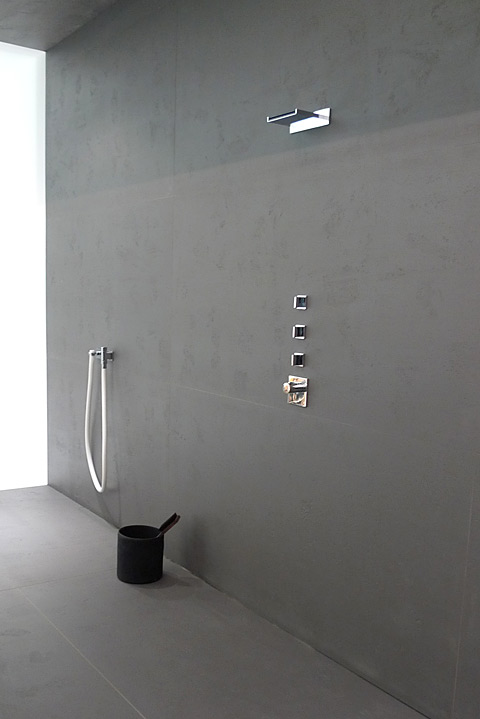 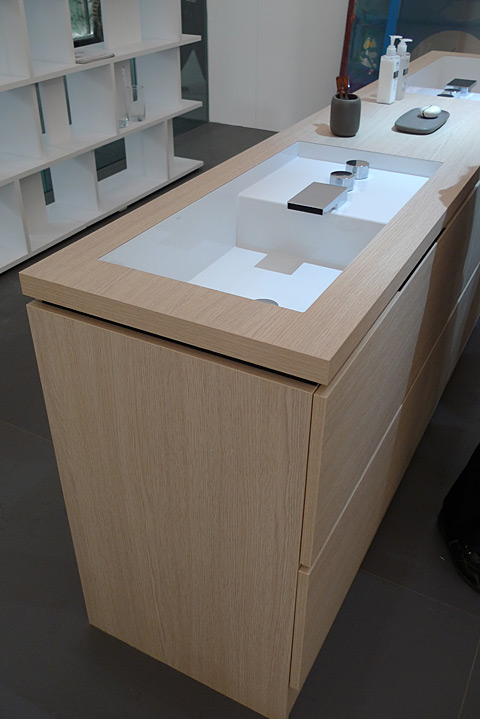 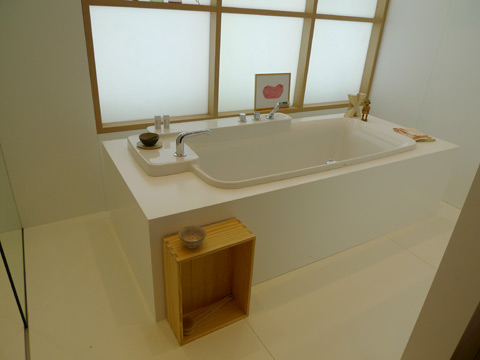 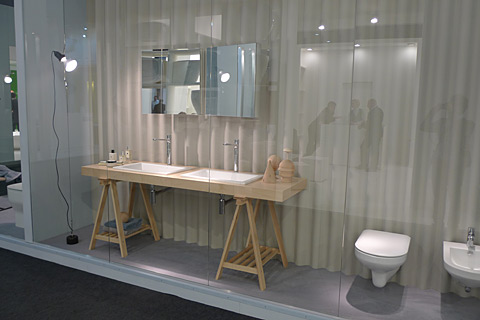 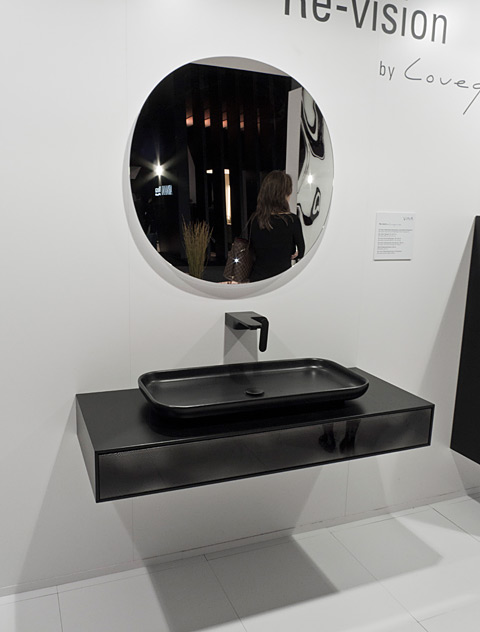 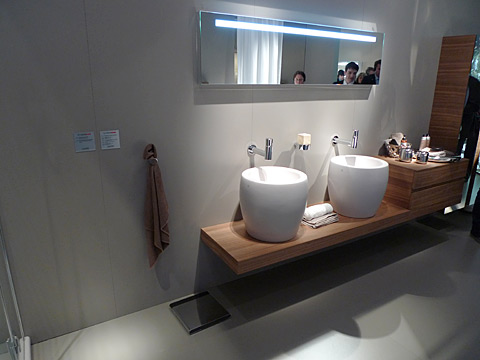 IlBagnoAlessi by Stefano Giovannoni for Laufen 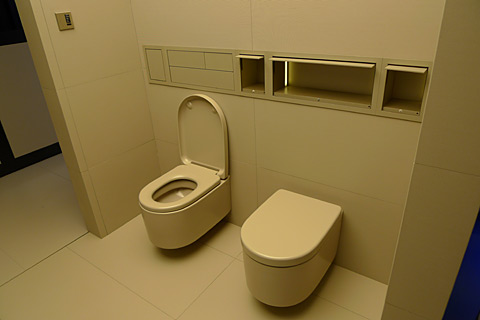 Bathroom by Roca with Armani 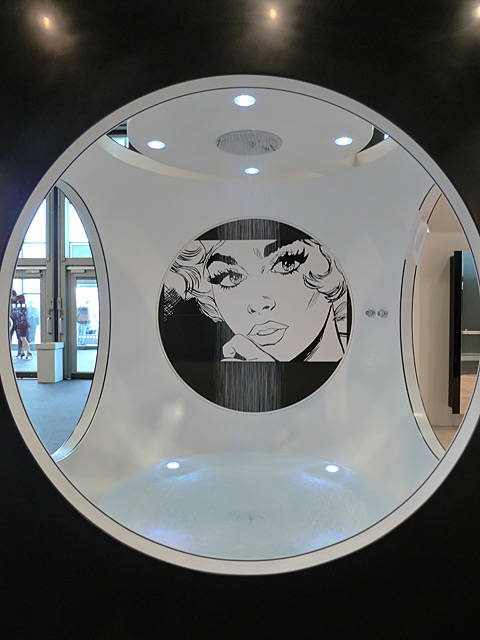 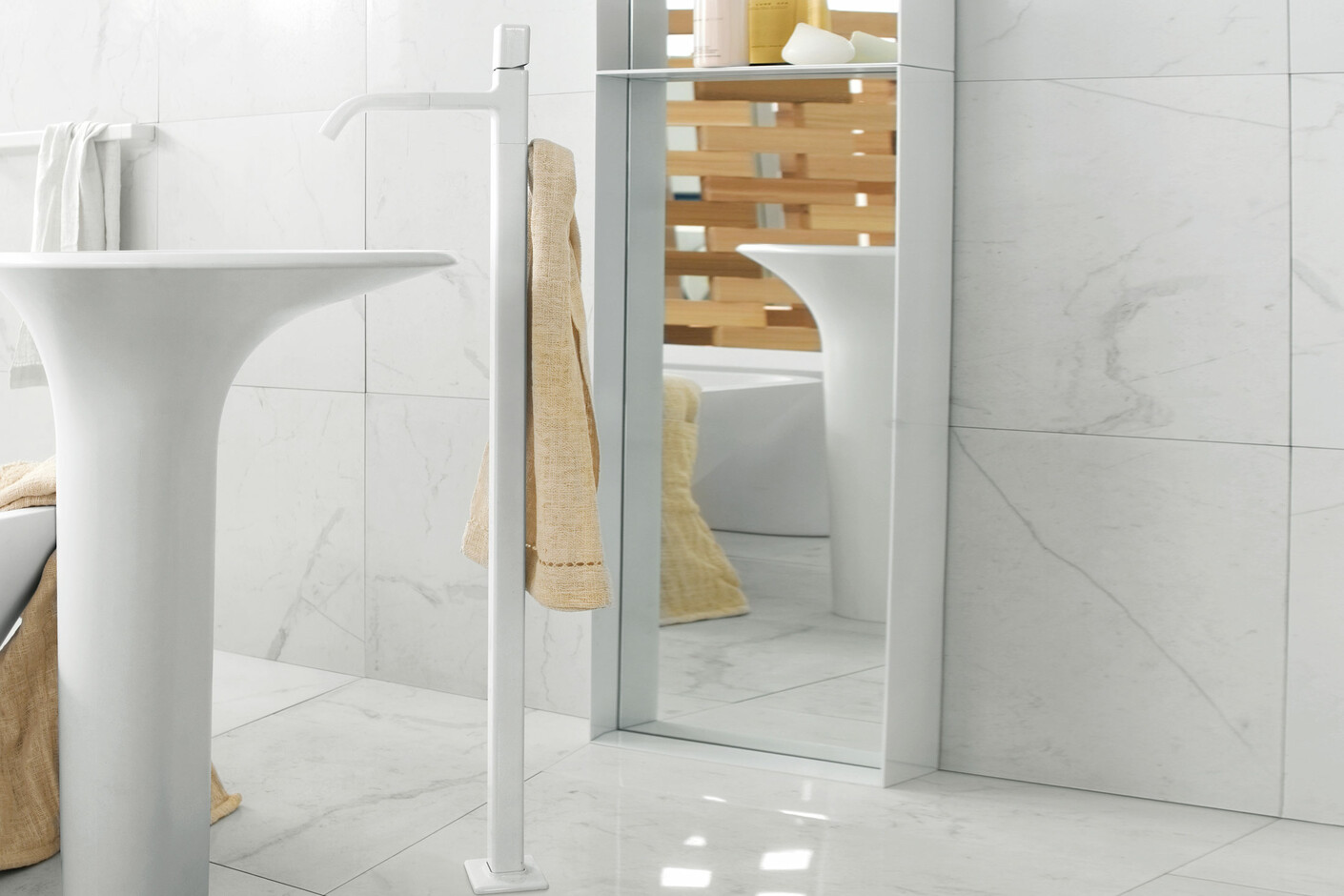 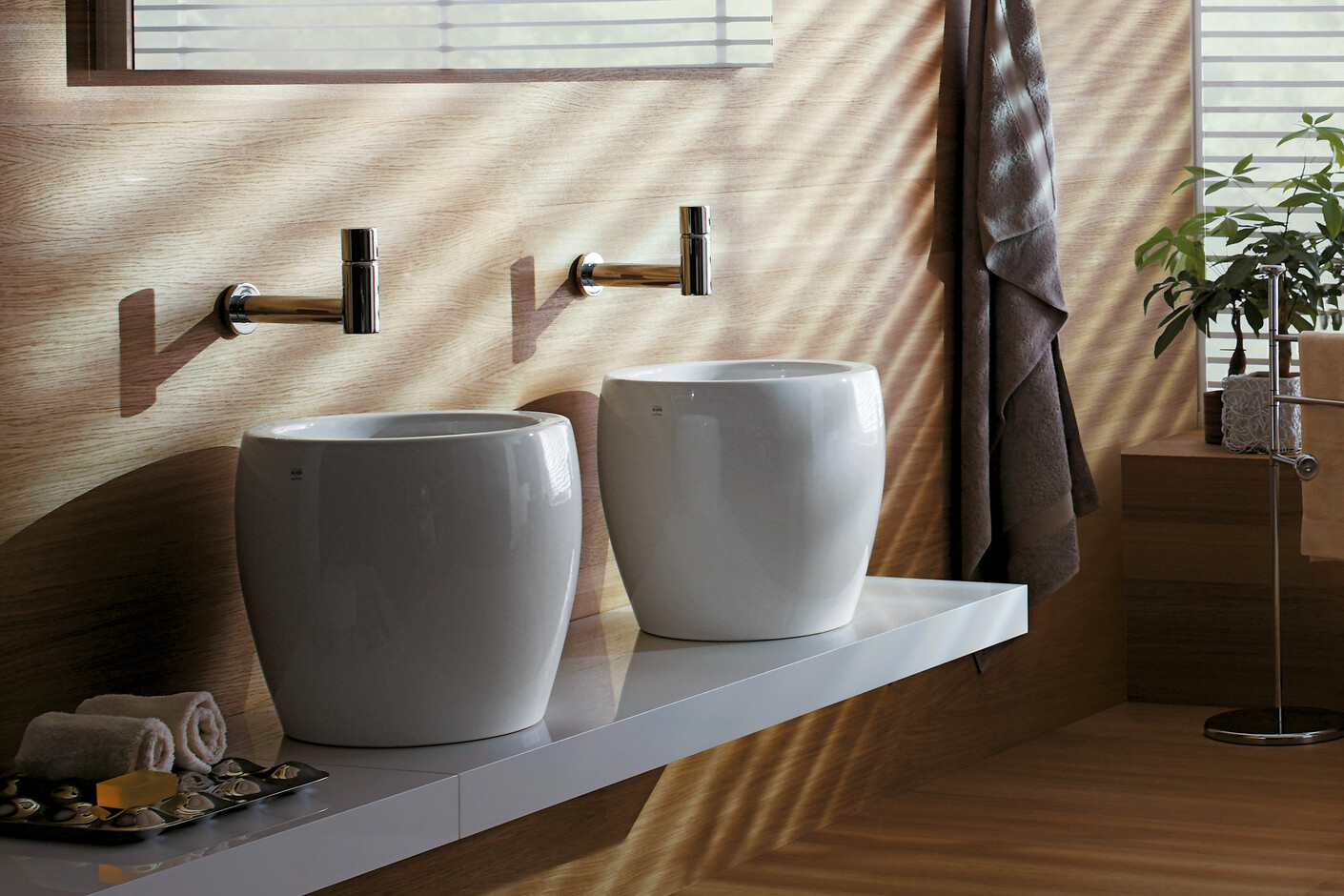