On the first day we follow our enthusiastic bellboy. He takes us to the oldest district in Tel Aviv, Neve Zedek, where the rich and the artists live, a real untypical mix. We are not that interested though, because we can hardly wait to finally set out in the direction of Rothschild Boulevard, the Champs-Elysées of Tel Aviv. For there, so they say, the Bauhaus-style buildings are just lined up one after the other. Our self-appointed guide calls back to us: "The Bauhaus is all yours". Then we are there. We can see the first white, plain, cubic houses.

In 1909 60 families founded Tel Aviv, which means "hill of spring", on a completely undeveloped area of sandy land near a small harbor town. Owning to constantly rising numbers of immigrants (more than 235,000 between 1933 and 1939 alone) Palestine urgently required more living space. The architecture was to be better, more attractive, more modern, more social and perforce cheaper. Israel, that also meant: building a new country.

The international-style buildings are loosely lined up. Only in certain inner city streets is their density particularly high. Some of them have been well restored, but most could do with a lick of paint. Residential blocks built later on were designed to fit in with the existing buildings, so that only a few details reveal which buildings are in the international style and which are more recent.

In Tel Aviv, the buildings constructed between 1933 und 1948, which number more than 4,000, are generally described as "Bauhaus architecture". That said, the influence of Walter Gropius' Bauhaus on Israel's architecture is comparatively small. What the Bauhaus did contribute, however, was the dream of a new way of life, of new forms of construction and their spatial structuring. The Bauhaus' collective approach to work also corresponded to the Socialist-Zionist idea of the Kibbutz movement.

To a certain extent the school in Weimar and Dessau bundled all the architectural trends that were prevalent across Europe at the time, from the international style and Deutscher Werkbund to the De Stijl group. In the 1920s and 1930s, newly trained, Jewish architects from all over Europe fled to Palestine. The immigrants had studied at various European schools. The Belgian school in Brussels and Ghent was especially popular on account of its combination of engineering studies and architecture. Others came from the Bauhaus and completed their studies in France or Austria. They brought with them the revolutionary ideas of Le Corbusier, Walter Gropius, Mies van der Rohe and first and foremost Erich Mendelsohn to their new home.

Others, who had already studied in Palestine in the late 1920s, added the new architectural method to their repertoire. The link between the architectural knowledge they acquired and local climatic conditions, together with the regional culture, led to the creation of independent new forms. The large glass surfaces of European Modernism, which would have heated up interiors far too much, were simply inconceivable in Israel. Thus instead of strips of windows there are long receding balconies, which often have horizontal louvers built into their balustrades to let the cooling sea air flow through the building. In addition, projections and recesses in the volume of the building or in the structure of the plaster allude to the missing windows. Here too, references to European Modernism were less important than appropriate measures for the climatic conditions.

Every architectural element, be it a pergola or protruding concrete porch, primarily serves people's well-being. For this reason, some buildings have even been built on stilts, so that the sea breeze cools them. Moreover, elevating buildings had other advantages. Firstly it left free urban space which could be used in diverse ways, for example, as a courtyard, garden or parking area. Secondly the apartments were protected from the worst of the dirt and noise from the street, and finally the structure itself provided shade. Later, when more space was required, some of the free space on the ground-floor level was converted into shops. Ze'ev Rechter, who completed his studies in Paris, was an enthusiastic pupil of Le Corbusier. He built Tel Aviv's first house on stilts. Today the building is rather inconspicuous, crooked and blocked in, situated on a street corner. An old photo on a construction sign tells of its former glory.

Since the unique ensemble in Tel Aviv's inner city was declared a UNESCO World Heritage Site in 2003, something has been happening in the city. There are 1,000 listed buildings, 120 of which are subject to strict regulations. Depending on the building, decisions are made about the corresponding architectural restoration measures. For in the course of the strong growth over recent decades, one or sometimes even two stories, slightly set back, have been built onto residential buildings, for example. The regulation of the extensions is intended to preserve Tel Aviv's garden-city character, in line with Sir Patrick Geddes' urban planning concept of 1925.

There is a real masterpiece at "1 Zamenhoff Street". Here our desire to tangibly experience those flowing forms that have burned themselves into our memory with the images of buildings we have seen in subtropical latitudes is satisfied. It's all here: whitewashed plaster, thin columns, an entrance that stretches back, brass-clad doorframes and long, curving rows of balconies that softly caress the building and reach up into the blue, cloudless sky. This is the Hotel Cinema, a lovingly renovated gem of the international style and part of the complete artwork of Dizengoff Square. According to Geddes' plan, Dizengoff Square was to be hexagonal in shape and thus call to mind the Star of David. However, the architect Genia Averbouch, who won the design competition in 1934, configured the buildings in a circle. Meir Dizengoff, Tel Aviv's first mayor, organized the competition in honor of his late wife Zina. In the 1970s the green, traffic-calmed square was elevated on account of increased traffic levels, such that today, pedestrians can take a seat on blue benches grouped around a fountain above the streets. Discussions are currently underway as to whether the original design should be restored.

There is a small kiosk on one of the many green areas, generally undeveloped spaces in the city grid covered with prolific greenery, from which we catch the scent of coffee and cake. We take a seat and strike up a conversation with two regulars. Meanwhile a dog sniffs at everything it happens to come across. The pair ask us if we were not scared about coming to Israel. We answer and ask them in turn what they think of Israeli politics and what it is like living there, in a city with so much fantastic architecture. "Israel is sick. - Sick?! I would say complicated", says one of them. From then on, unfortunately, there was no more talk of architecture.

The exhibition "The ‘White City' - Tel Aviv's Modern Movement" is on show at Deutsches Architekturmuseum in Frankfurt/Main until September 13, 2009.
www.dam-online.de

And the exhibition "Modell Bauhaus" is on show at Martin-Gropius-Bau in Berlin until October 4, 2009.
www.modell-bauhaus.de 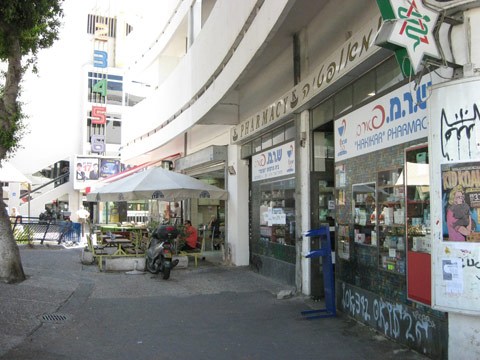 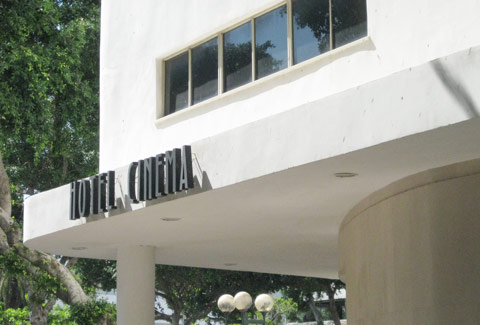 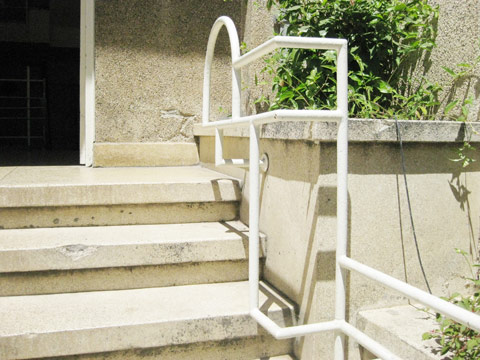 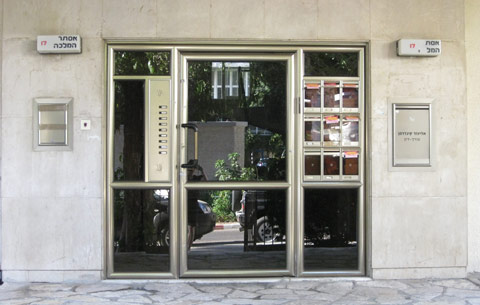 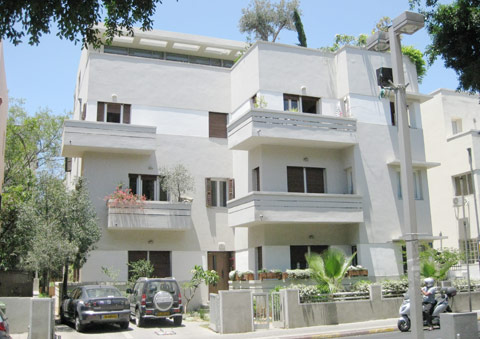 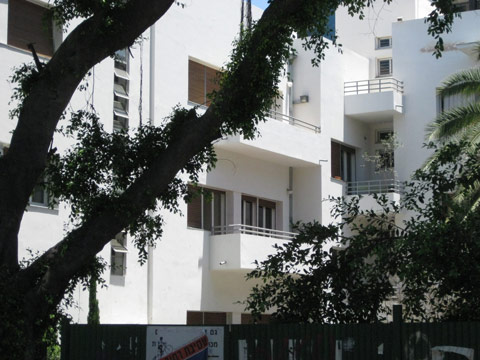 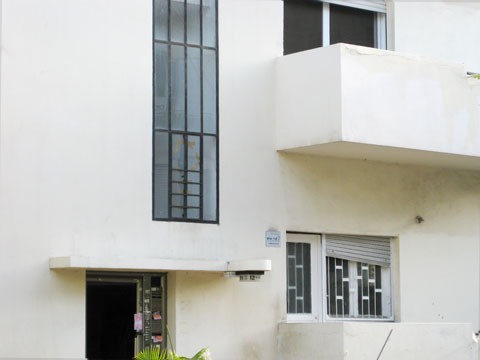 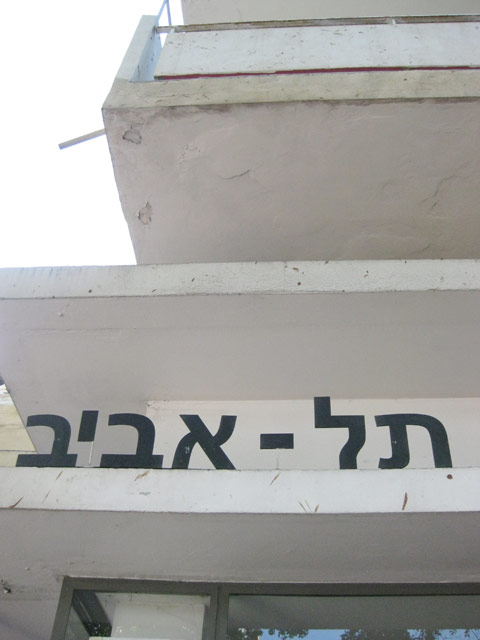 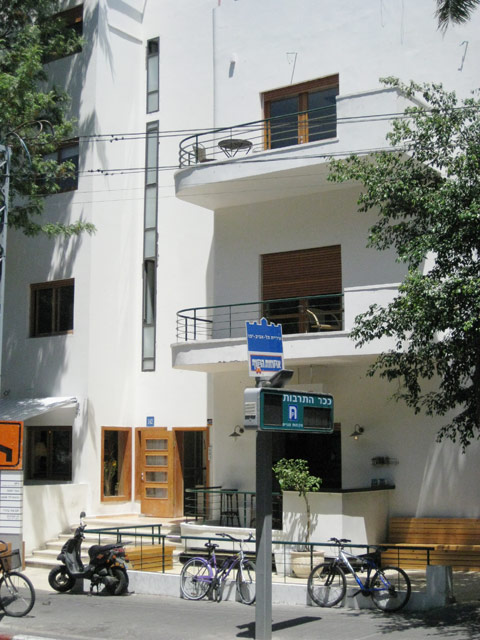 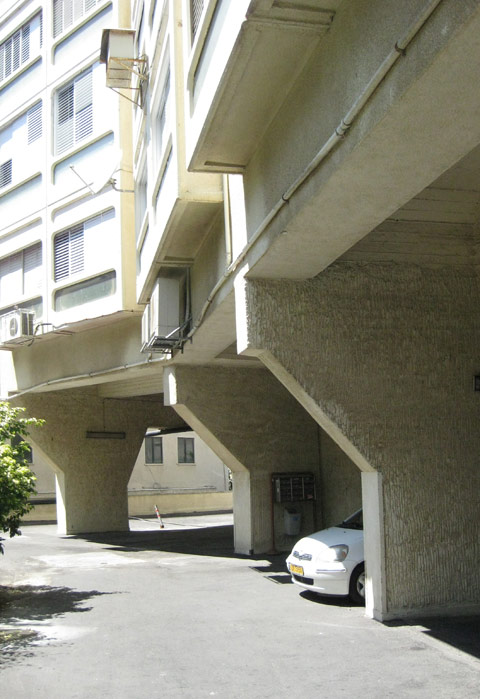 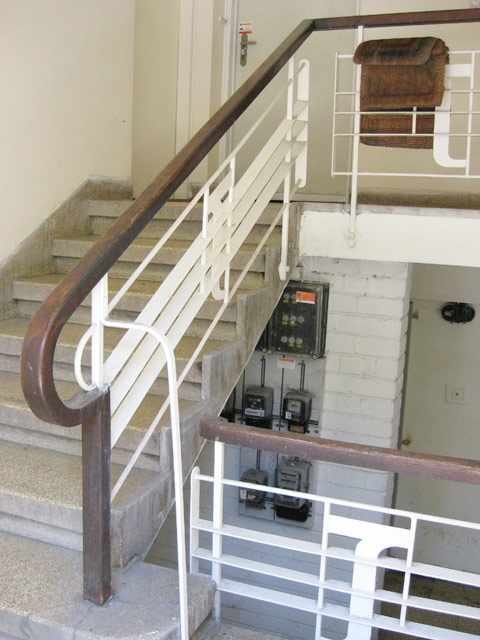 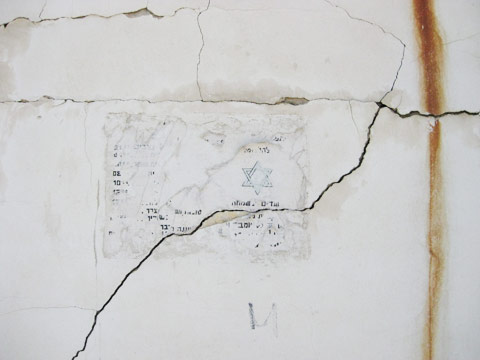 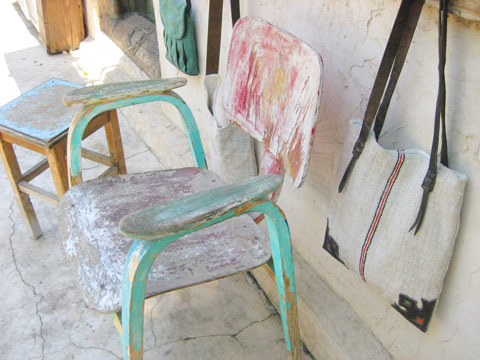 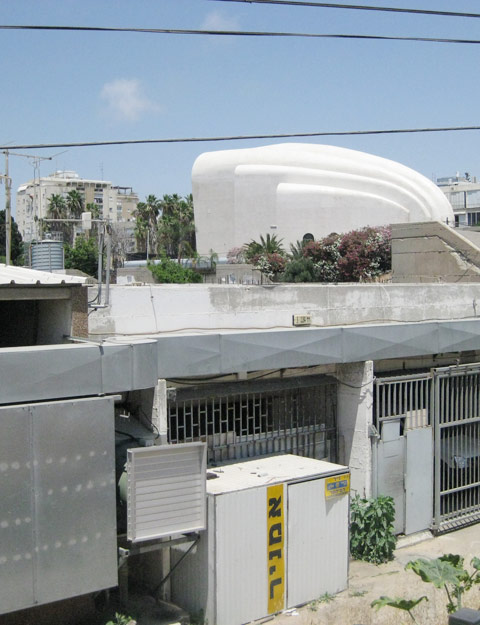 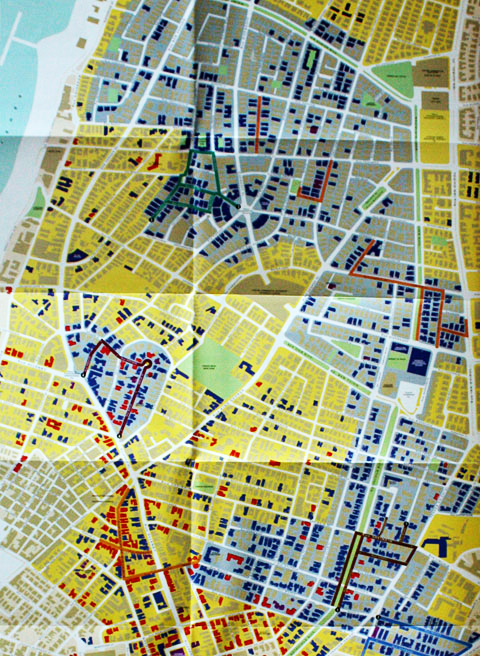 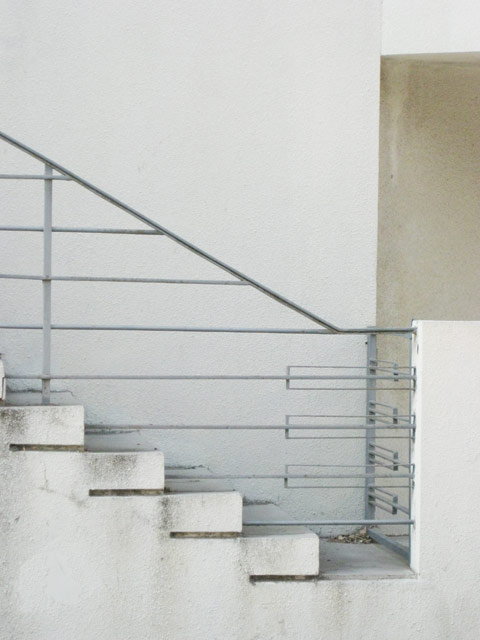 Detail of a house, designed by Oskar Kaufmann 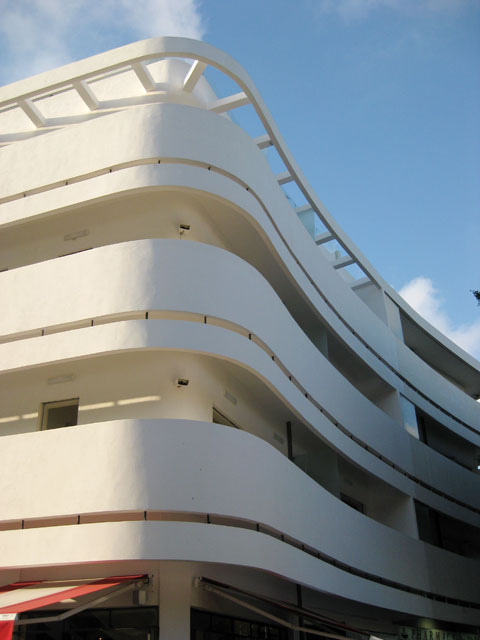 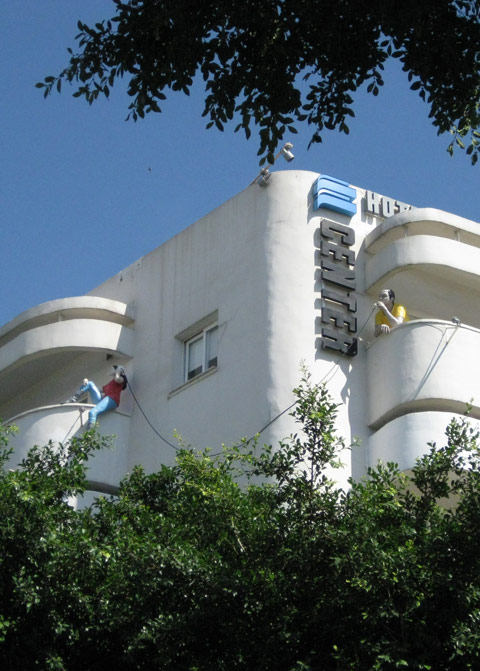 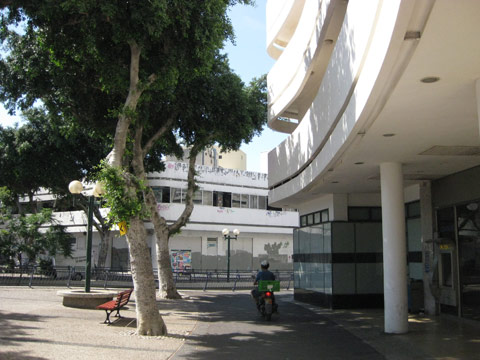 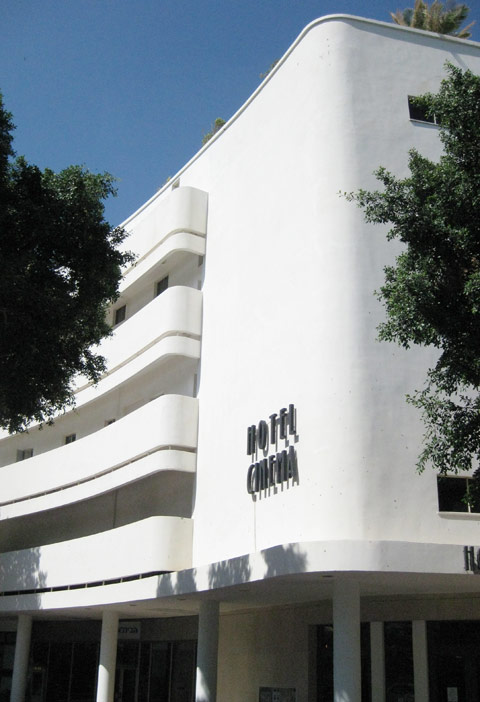 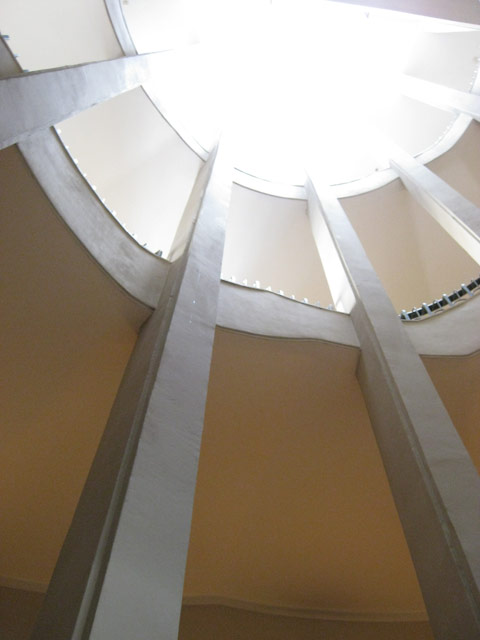 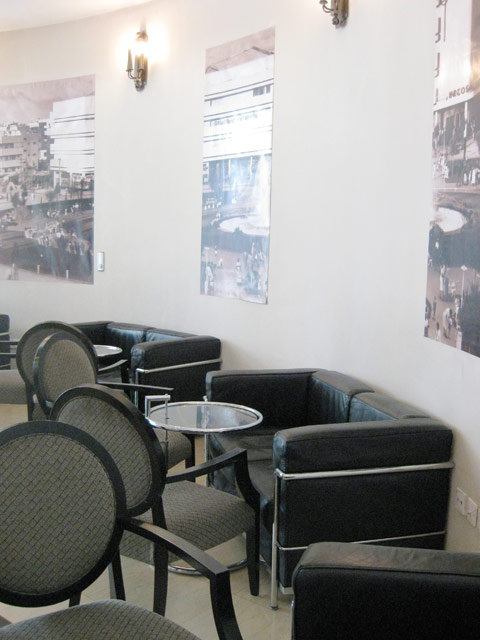 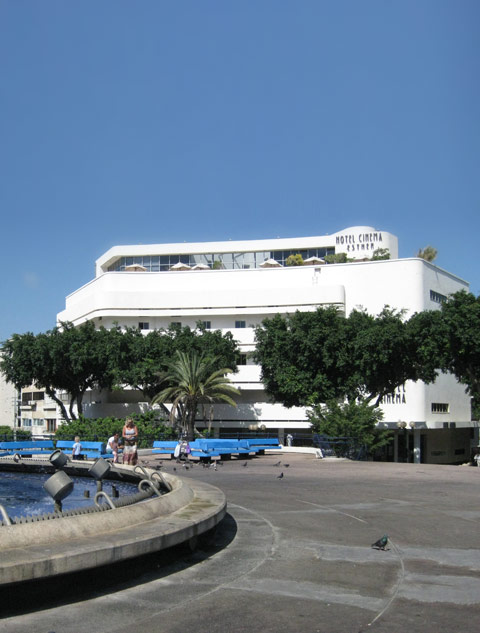 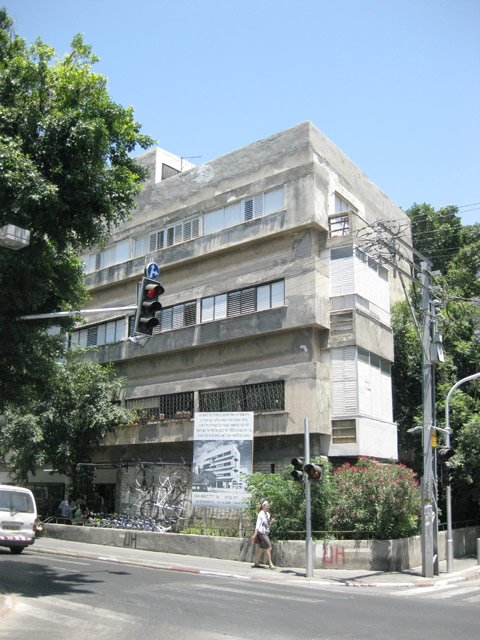 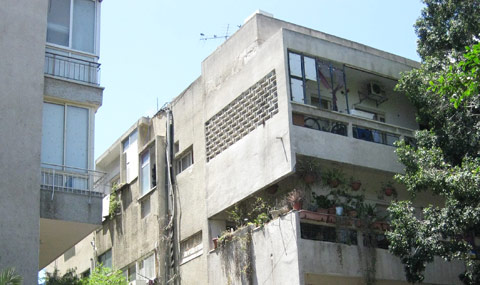 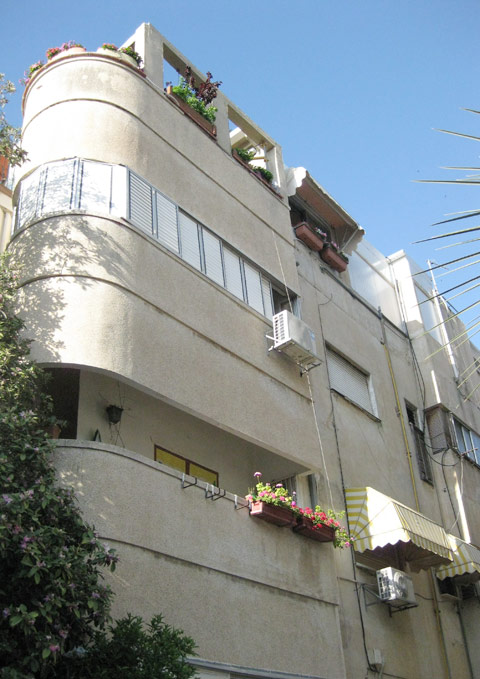 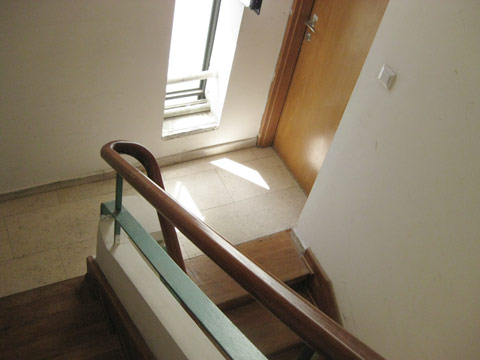 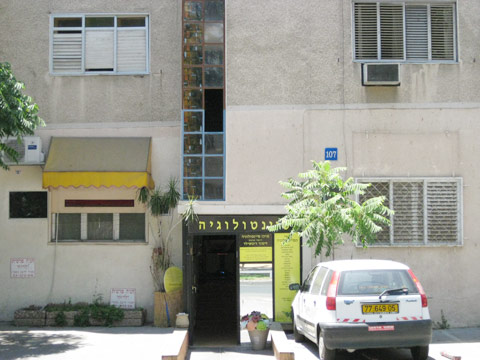 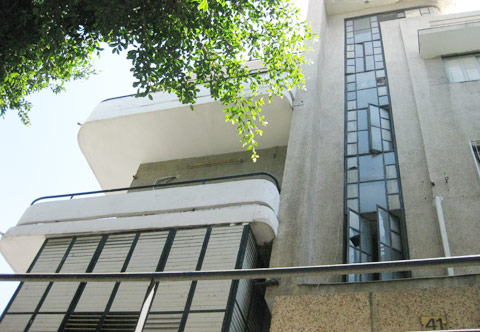