It is made of plain brass grommets which have been onto a band made of chamois leather, and so it makes use of semi-finished parts found in a hardware or household store. The “#A103” necklace by artist and textile designer Anni Albers and her former student Alex Reed is probably one of the oldest examples of modern jewelry design that can still be purchased today; and that for a rather small sum. Around 1940, Albers and Reed created an entire series of necklaces for a travelling exhibition, which opened in New York’s Willard Gallery. All manner of ready-mades provided the inspiration for their work. Sometimes they would pair a chain used in plumbing with a sieve and office staples, at others they would conjure something out of corks and hairpins, or even combine precious pearls with different sized ring bolts. While this use of such simple materials and reduced forms may have be down to the economy of scarcity during the Second World War, it was also triggered by the fundamental changes in artists’ and designers’ understanding of jewelry at the time.

Today there is a whole range of galleries dedicated to contemporary jewelry design. These include Bruna Hauert’s gallery “Friends of Carlotta” in Zurich, which has just exhibited works by 65 jewelry designers under the title “In der Südsee”, or “Oona” in Berlin, directed by cultural studies scholar, Anna Schetelich. Aside from exhibiting jewelry, Schetelich is also interested in the boundaries between art and design, representing Svenja John, for example. This goldsmith and studied designer pieces her jewelry together from Makrofol, a foil made of polycarbonate. Stringing, weaving and clustering the material creates patterns that are reminiscent of stylized flowers, polished stones, and sometimes even illustrations by Ernst Haeckel.

Of course, even such projects by Anni Albers, Anna Schetelich and many others can not disguise the fact that even today a more traditional notion of jewelry still prevails. Leaving little space for experimental, artistic jewelry design, representative gold jewelry retains its status as the preferred choice, its worth having been eulogized throughout the centuries. As early as 1100, Benedictine monk Theophilus Presbyter mentioned goldsmith’s art along with a series of other crafts in “De diversis artibus”. While between 1565 and 1568 sculptor Benvenuto Cellini provided an overview of the techniques and motifs seen in the Italian Renaissance in his “Essays on Goldsmith’s Art”. In 1856, Gottfried Semper also composed a theoretical text on jewelry “On the formal legitimacy of jewelry and its significance as an art symbol”, albeit here the architect advances a predominantly ethnographic consideration of non-European cultures.

Over the past years, the volume of literature on jewelry certainly has increased; Arnoldsche Art Publishers offers a wide spectrum with around fifty publications. The series explore the boundaries between jewelry, appliance, product, sculpture and light. The works feature monographs written by designers such as Gijs Bakker, Giampaolo Babetto or Petra Zimmermann, as well as publications by several galleries, labels and schools such as Galerie Slavik Vienna, Chi ha paura…? and the Padua School. A spotlight is shone on the experimental use of materials such as steel and glass as well as key themes such as black, phalluses and snakes. Despite all of this experimental energy, the history of jewelry should not be allowed to fall into obscurity: Just think of the collection to be seen at the Jewelry Museum in Pforzheim, the exhibitions held by the Neue Sammlung in Munich, or historical movements such as Art Nouveau, the Wiener Werkstätte or Art Déco, or traditional jewelry, from Africa for example. Here one could look to commercial representatives such as Jette Joop or Bijoux Christian Dior. Liesbeth den Besten has also made a name for herself among jewelry designers. Educational institutions such as the Goldsmith’s School in Pforzheim or the University of Applied Sciences in Trier would also fall under such considerations.

“Think Jewellery” is the title of the latest publication from the University of Applied Sciences in Trier, produced in collaboration with the town of Idar-Oberstein. The compendium presents the outcomes of the eponymous symposium, which has been held annually since 2005. The event takes a particularly interdisciplinary approach, whereby arts scholars, sociology experts and scientists can be heard talking on the topic. As emphasized by curator Werner Lindemann, this sparks discussions surrounding the increase in designers who reflect upon their own works on a higher theoretical level. Bernhard Schobinger argues against the methodological constraints in the applied arts, Suska Mackert speaks of an “object of beauty”, and Jivan Astfalck examines “Lifelines: Myths and Meaning – Learning and Teaching”.

The question posed at the start of the book – “What is jewelry?” – may not find a conclusive answer among the contributions within it; however these do provide an extensive dialog on the topic as well as an array of interesting illustrations. Nowadays, is it not just diamonds that are a girl’s best friend, but brass grommets too?

Literature to read on: 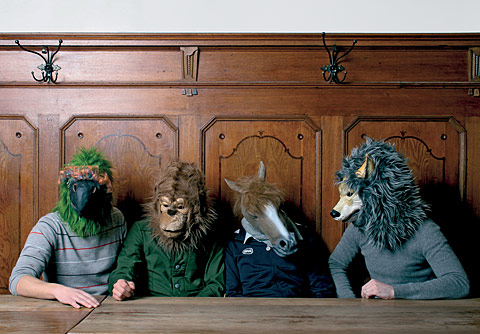 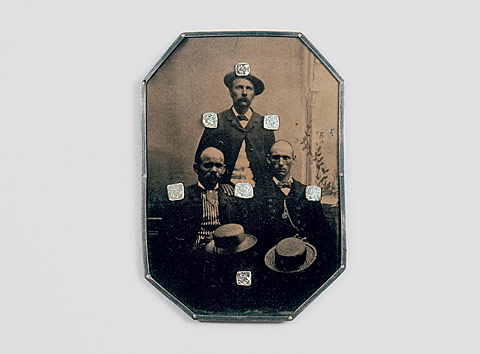 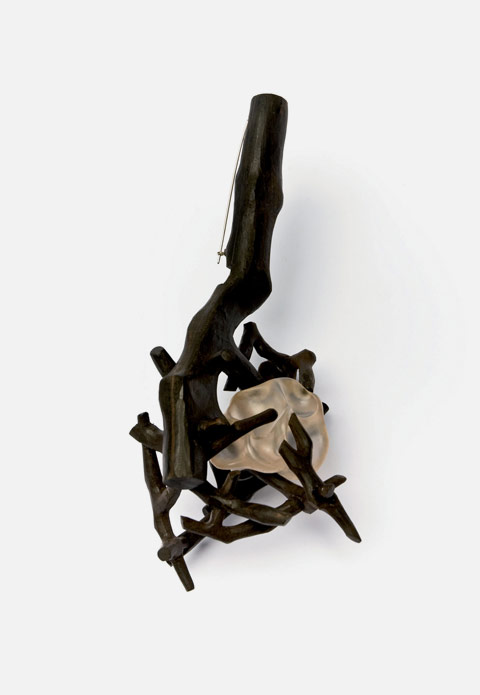 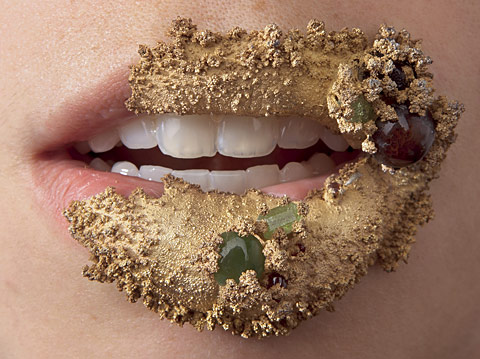 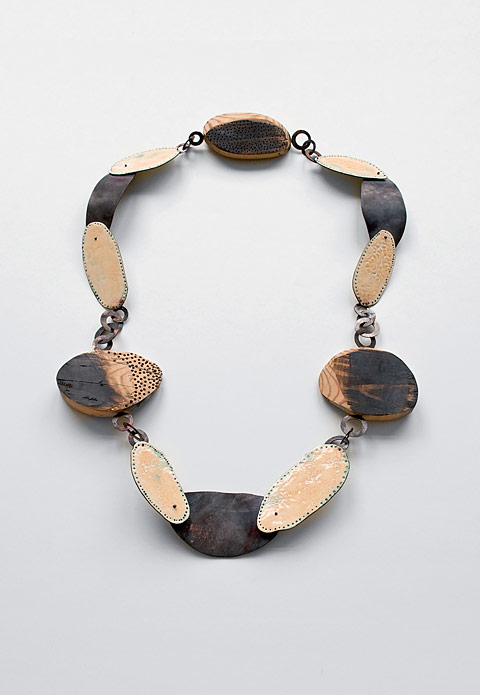 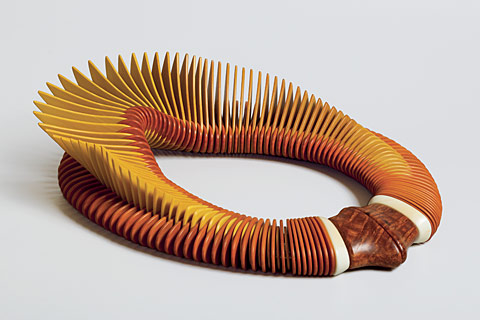 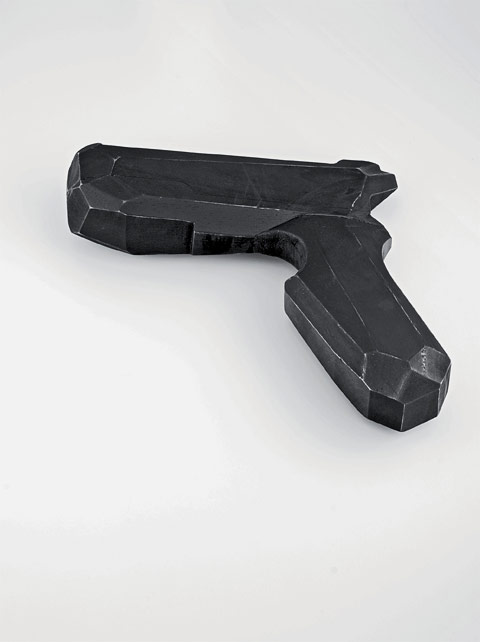 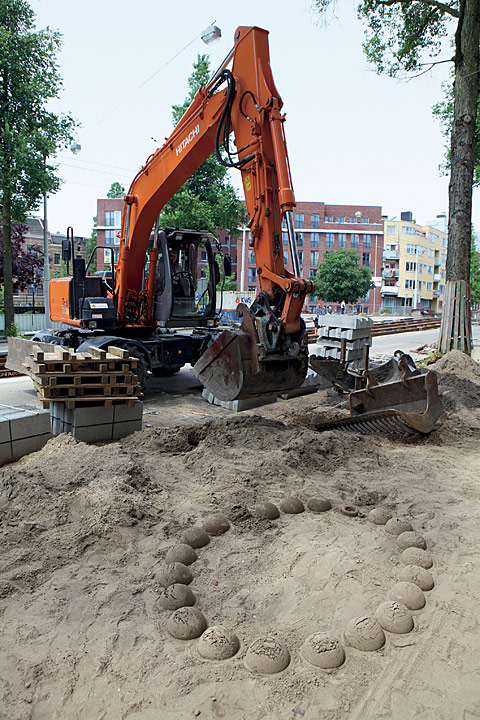 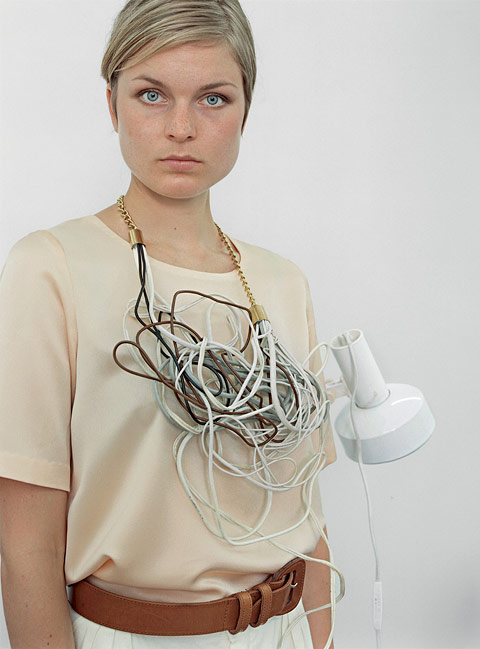 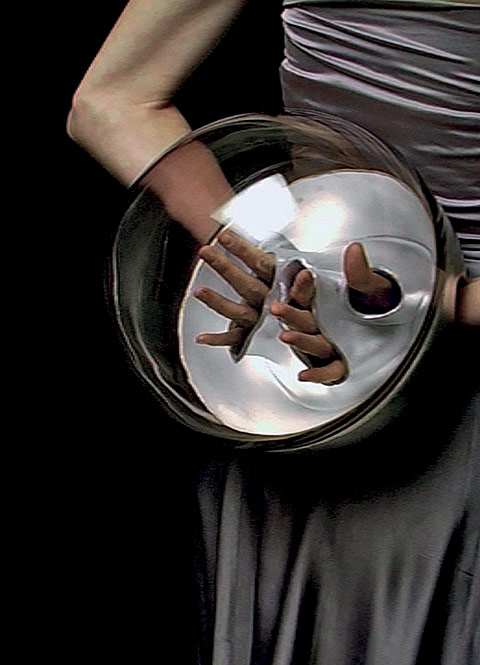 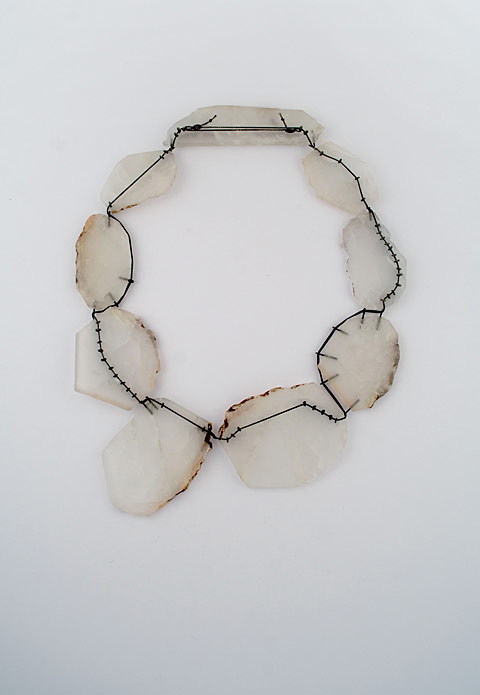 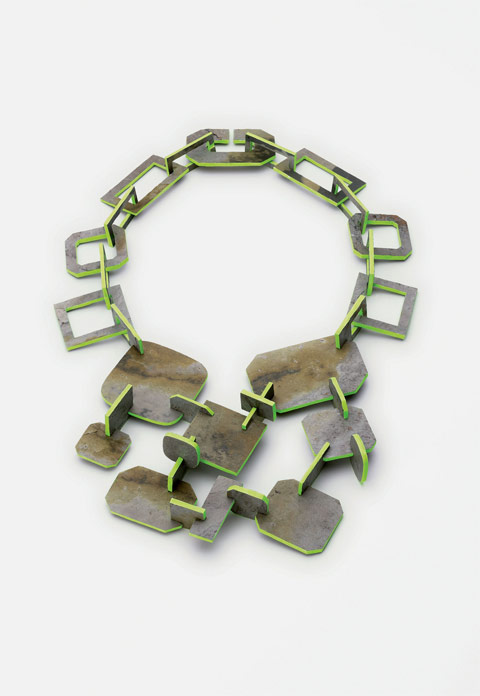 Necklace ”As light as a stone” by Antje Stolz, 2009, photo © Lichtblick-Fotodesign, Schwollen 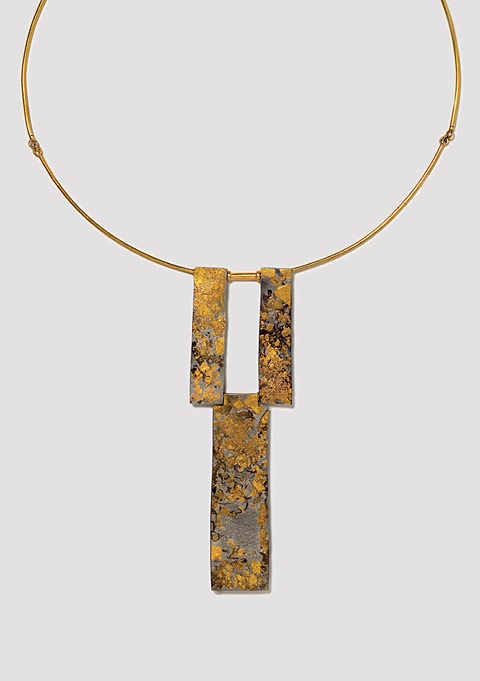 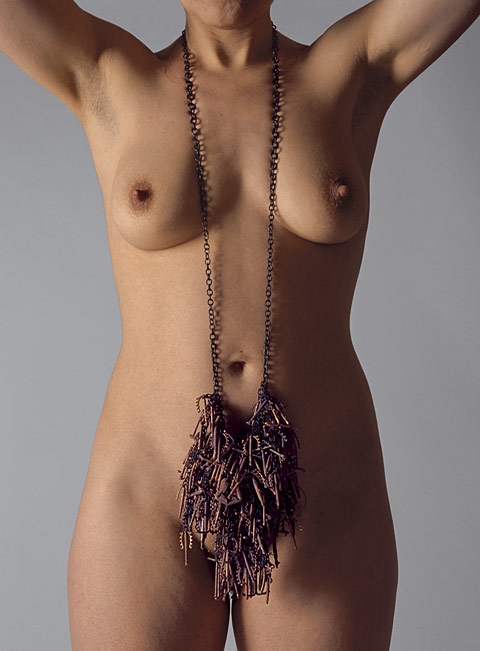 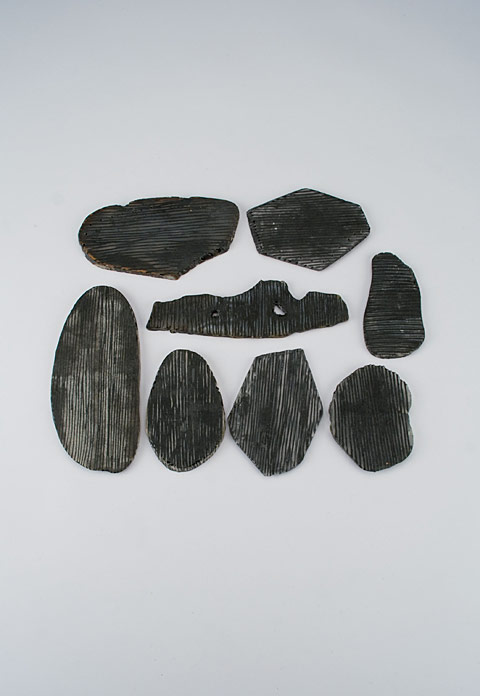 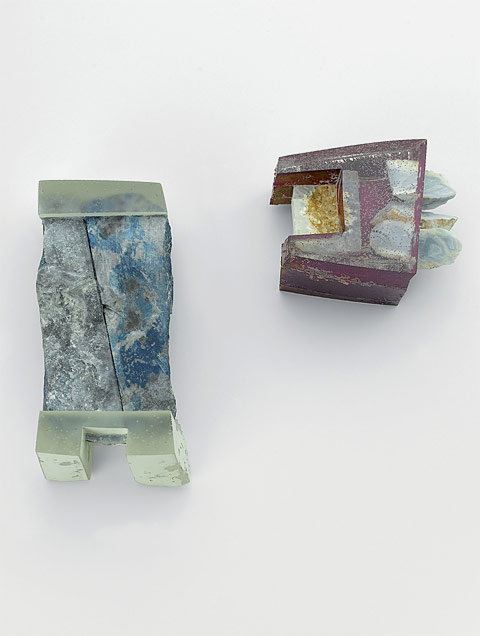 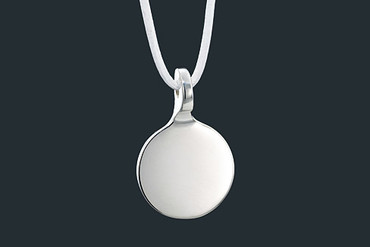 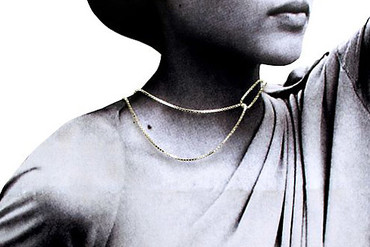 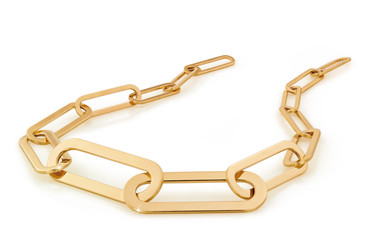 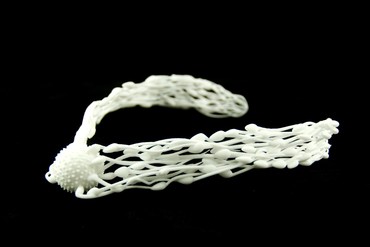 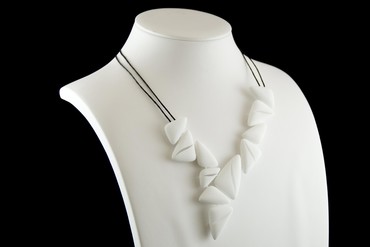 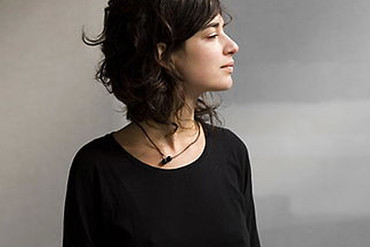 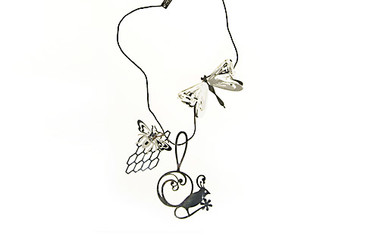 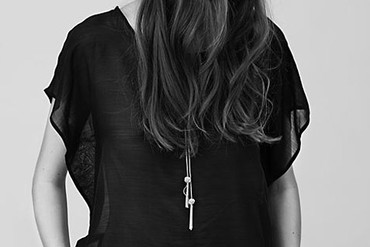