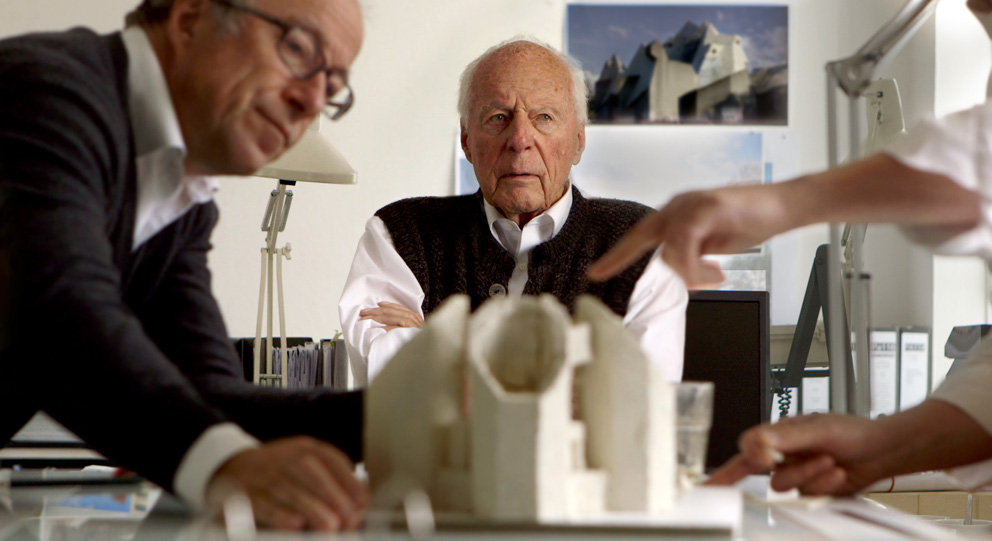 Gottfried, Peter, Paul, Stefan, Dominikus floating above them all, and the good woman of the house Elisabeth – what a family! A dynasty of architects in which one could be forgiven thinking everything has gone smoothly for generations – successful, harmonious, productive. And this is how full of a father’s pride in the film “Die Böhms – Architektur einer Familie” Gottfried interprets the Big Wheel on the Deutz fair ground in terms of his sons’ major projects: the arena by Peter, the mosque by Paul. And of course the film also casts a glance at the father’s legendary projects, we visit the St. Mary’s Cathedral in Neviges and witness Gottfried hunting for a seat in the Bensberg Town Hall he created. It’s great to view these projects with the calm of a film.

The film is not just devoted to the built projects, but also familiarizes us with the life in the Böhm family. The young filmmaker Maurizius Staerkle-Drux is a friend of the family and considers Gottfried Böhm “despite the great difference in age as an inquisitive and impressive artists who is my intellectual contemporary.” For over two years Staerkle-Drux lived in the the family’s midst and filmed away. He takes us along into the living room or over to the drawing boards. Where we soon find that not everything in the Böhm family enterprises comes up roses. It may be one family, but there are four independent offices and above all four very stubborn characters. “Somehow Paul went and pushed his way in,” we hear Peter cursing, “and I really need work at the moment.” He most clearly considers the brothers as rival entrepreneurs. And Paul confirms: “Perhaps it’s the self-same situation as when we were kids.” Peter says of himself that he has done a few things differently to his brothers – yet in fact it is Stephan who in architectural terms has distanced himself most from his family roots. He designs many buildings in China, and enthuses about the dynamism there. But when projects there stutter he seems lost, sitting alone in a ruined building instead of at table dining with his bros.

The way it is with families – it’s hard to find a balanced relationship between closeness and distance. And the patterns get repeated down through the generations. As Peter, Paul and Stephan all agree that the relationship to their dad is tough. “He’s forever poking his nose into things,” says Paul. And Stephan comments: “My dad would have liked it if we had continued in his own vein.” “My dad always felt I would succeed him. That frightened me and I wanted to do sculpture,” states even Gottfried about his early tussles with Dominikus. A statement by the first grandson to study architecture would have been interesting at this point, such as one of the sons of no. 4 son Markus, who first studied IT and now works as a painter for buildings, including those by the Böhm family.

The film concentrates, however, on the core family of architects. And the actual protagonist is someone who never herself worked as an architect, namely Elisabeth. We see her drift into dementia, how her husband Gottfried cares for her, and then her death. At some points the film is perhaps too intimate, but it strikes a reconciliatory note. Lovingly and full of admiration all the boys say their mother was their source of inspiration, her criticism key to their father’s oeuvre and the way she raised them a crucial influence. In this way, the film “Die Böhms – Architektur einer Familie” is also a monument to a woman who built no monuments, but raised one, and whose soul is no doubt to be felt in all the Böhm family buildings.

>> More about Gottfried Böhm on Stylepark.