Scorching hot things glow deep red, while cooling return pipes and storage tanks radiate a deep blue. The function diagrams displayed by the heating industry certainly inspire confidence. In halls 8 and 9, the ISH focused on nothing more and nothing less than saving the world, in Germany also known as the energy turnaround. There are technical diagrams on display replete with strong colors. Arrows emphasize relationships: cause here, effect there. The world is simple, if only you want it to be. Yet here the politicians are not the ones making the decisions – or perhaps only by means of the subsidies and grants currently being channeled into certain technologies in Germany. Politics, it seems, presently finds itself completely entangled in the jungle of old and new lobbyists. What is happening with feed-in payments for renewable energy? Will taxpayers be financing “electricity highways” in future? Are they investing in local amenities? Is the electricity tax going to be lowered? Will there be fewer or more exemptions from the Ecotax in future? Does “fracking” constitute environmental pollution or not? When it comes to the real challenges regarding energy policy, politics has simply seized up. A perspective, a change – in whichever direction – does not seem to be on the horizon.

Technology for the basement

That is hardly a problem for suppliers of heating and ventilation technology and solar systems. Product developers and marketing experts have come up with a great deal of new technical equipment for the basement and thermal power stations, though not all of it is yet ready for serial production. It seems fuel cells, which have long been used to power military submarines, will be waiting a while longer for serial operation in the basement and under the hood. The technology is still too expensive. Nonetheless, Buderus and Viessmann presented first devices for field trials. The large superheated steam generators for commercial use are both impressive and very real. They show that saving energy by no means equates to a decentralized heat supply alone. The message is: Everything will be OK, we have the technology, in every shape and size, for every task, in every desired configuration and complexity, from the massive combined heat and power plant to the ice storage system, which depending on the season serves to either extract geothermal energy in combination with a heat pump or cool the building.

After the heating engineers and installers who familiarized themselves with new products at the fair, the industry is now looking to private home builders and housing construction companies to invest more in new technology. For there is a modernization backlog in German basement boiler rooms, both in private homes and large estates.
The keyword at this year’s fair was “combination”, known in the automobile industry as hybrid drive. Thus as of September Viessmann will be offering a new gas absorption heat pump. The device requires a shallow borehole for a geothermal probe, which is connected to the hermetically sealed heat pump module with zeolite. An integrated gas-fired condensing heat cell supplies 4.8 to 10 kW. The system can also be combined with solar systems to heat drinking water and is claimed to consume 25 percent less gas than conventional condensing boilers.

Another model, likewise available from the fall, combines a Stirling motor to generate electricity and a heating water buffer cylinder with a gas-fired condensing boiler for peak loads. The resulting micro-cogeneration unit covers heat requirements and produces electricity at the same time. However, if neither heat nor hot water is required in the summer, it also stops producing electricity too and the system’s running times, relevant for its economic efficiency, decrease.
Double burner technology rarely makes the devices cheaper. Yet the combination, also relating to the use of solar electricity and heat generation systems and new storage technologies, is intended to communicate a certain feeling of self-sufficiency to the customer. For given political uncertainties ever more manufacturers are encouraging the personal use of electricity generated by cogeneration – as well as modifying one’s own usage habits accordingly. Additional control technology, partly via smartphone app, makes this possible.

Design expertise as a show of color

Comparatively inconspicuous and surrounded by myriad switches and control systems, the new cool and composed fireplace inserts created by designer Stefan Diez for Buderus also premiered at the ISH.
Design as a brand element is ubiquitous, albeit with big differences in quality. Viessmann is the uncontested frontrunner as regards design expertise. Presentations, company documents, products and the staging of the booth all follow clear guidelines, whose effectiveness has not waned over the years. The first elements of the corporate design were developed by Stankowski+Duschek back in the 1960s, and it is still evolving today. Consistent quality remains evident despite a wealth of products. Many of them, with their clear and impressive form, are the work of Phoenix Design.
Regarding the consistency of design management and brand presence, Vaillant is close behind Viessmann. The brand has less of a technologically ingenious and more of a homely feel. A somewhat elaborate sweep across the front of the casings ensures the brand’s recognizability.
Buderus, now part of the Robert Bosch Group, is currently presenting a far more diffuse picture. The brand that once caught the eye with the solid blue of many appliances is now setting a new tone, with new and old models lined up next to one another, which conveys a somewhat unsettled brand image. Instead the booth is dominated by giant logos with an app aesthetic. The presentations of some companies under the umbrella of the European BDR Thermea Group were also completely muddled. Those that didn’t relatively forcefully draw attention to themselves with clear color codes like Senertec or DeDietrich Remeha, drowned in creative negligence and arbitrariness, one example being the traditional firm Brötje. And that despite innovative technology.

This is a problem that is soon to disappear in Denmark in this form. The country’s heartland is the size of the state of Lower Saxony, and has a population density of 129 inhabitants per square kilometer. The Danes have recently opted, with no public hoo-ha whatsoever, to ban the installation of oil and gas-fired heating systems in new buildings in future. The new political line is consensus oriented; all parties with the exception of the Liberal Alliance support the so-called “Energy Agreement”. Heating costs in Denmark are to be subject to a “security of supply tax” by 2020, which everyone will be able to calculate. The plan is that from 2020 onwards 35 percent of Danish energy consumption will come from renewable sources, rising to 100 percent as of 2050. District heating is particularly widespread in Denmark; it is used to heat half of all buildings. Only those who are not hooked up to the district heating network will be allowed to continue using coal[S1] or gas-fired heating systems. How are the Danes going to manage that? It is certainly difficult to imagine German politicians agreeing on such concepts. 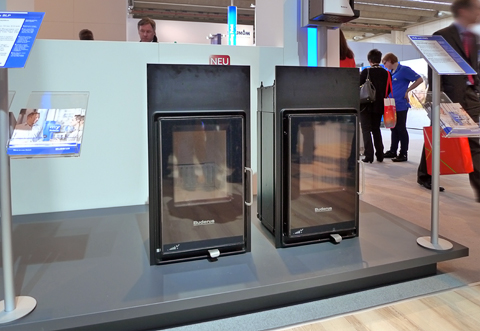 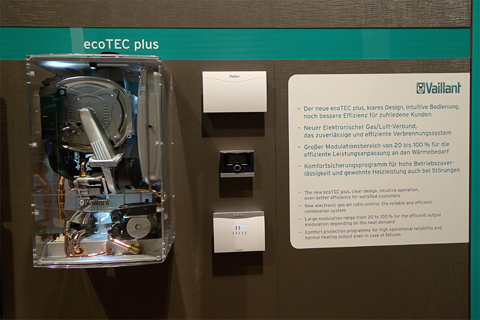 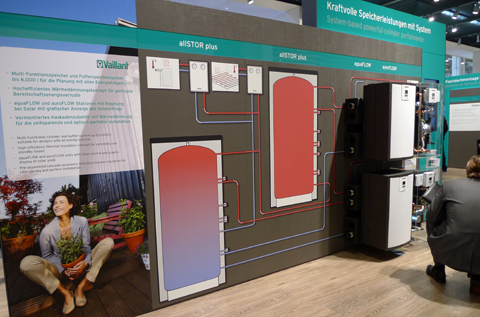 The brand Vaillant has less of a technologically ingenious and more of a homely feel. Photo © Thomas Edelmann 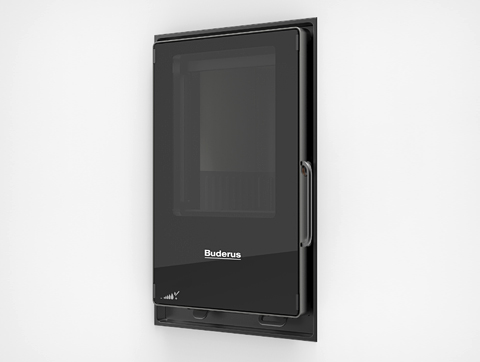 Heating insert at the booth of Buderus, photo © Thomas Edelmann 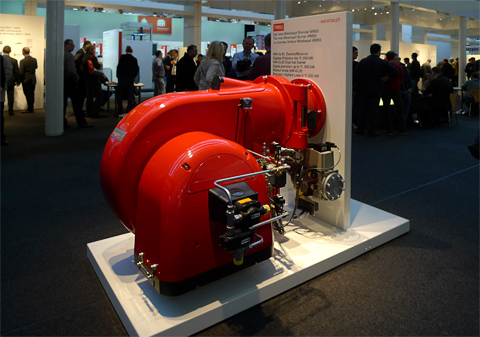 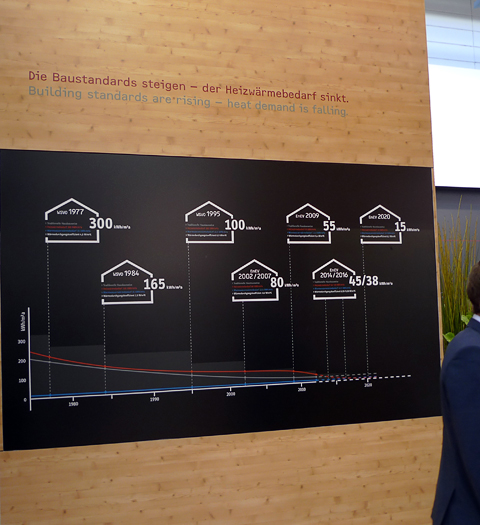 There are technical diagrams on display replete with strong colors from Stiebel Eltron, Photo © Thomas Edelmann 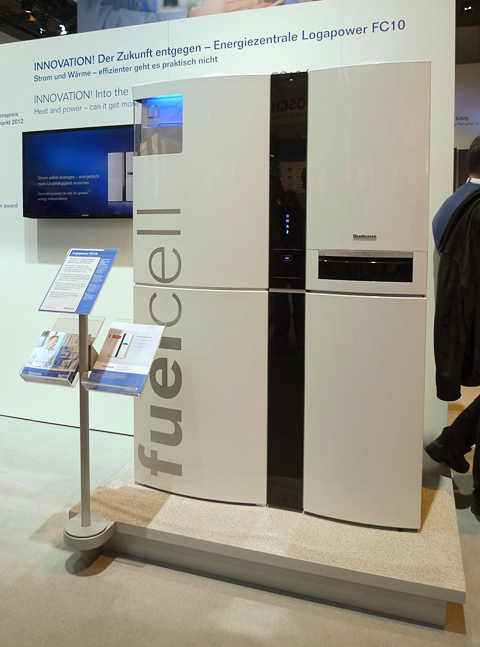 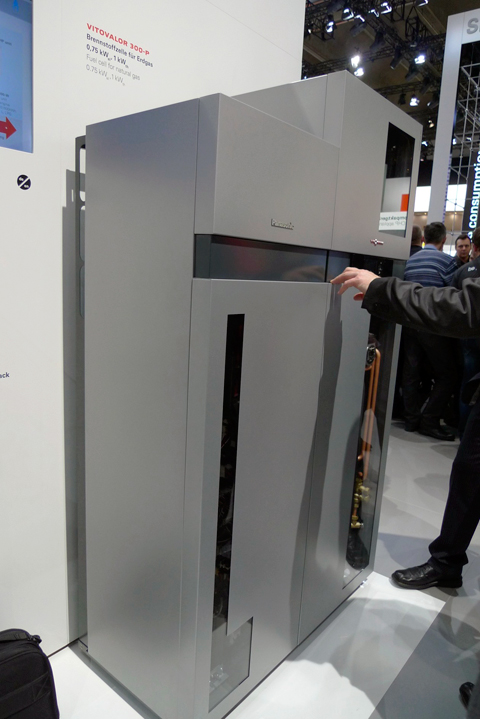 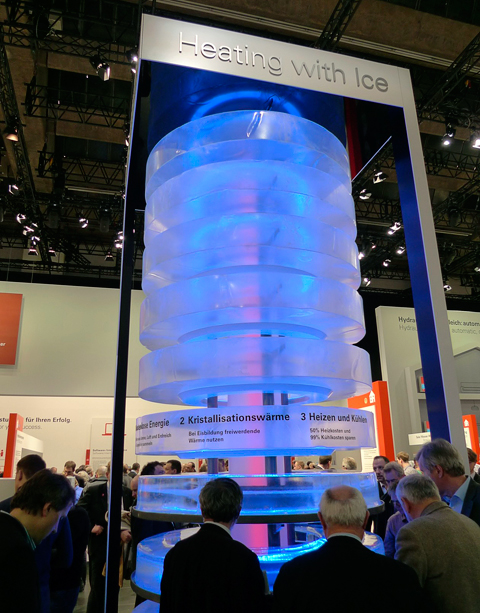 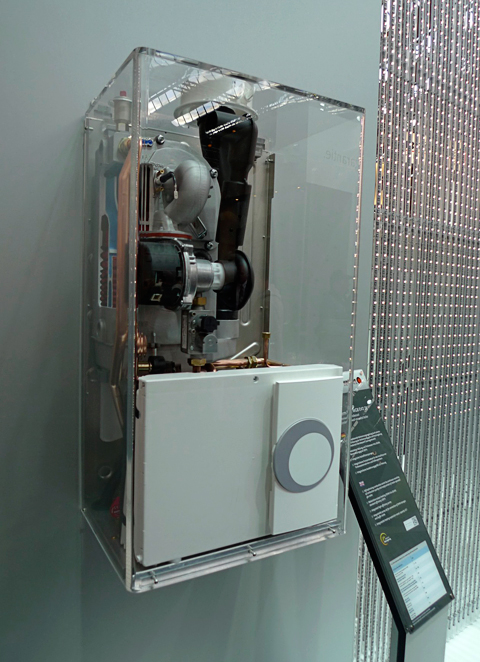