top
The car versus the ant
IN CONVERSATION: 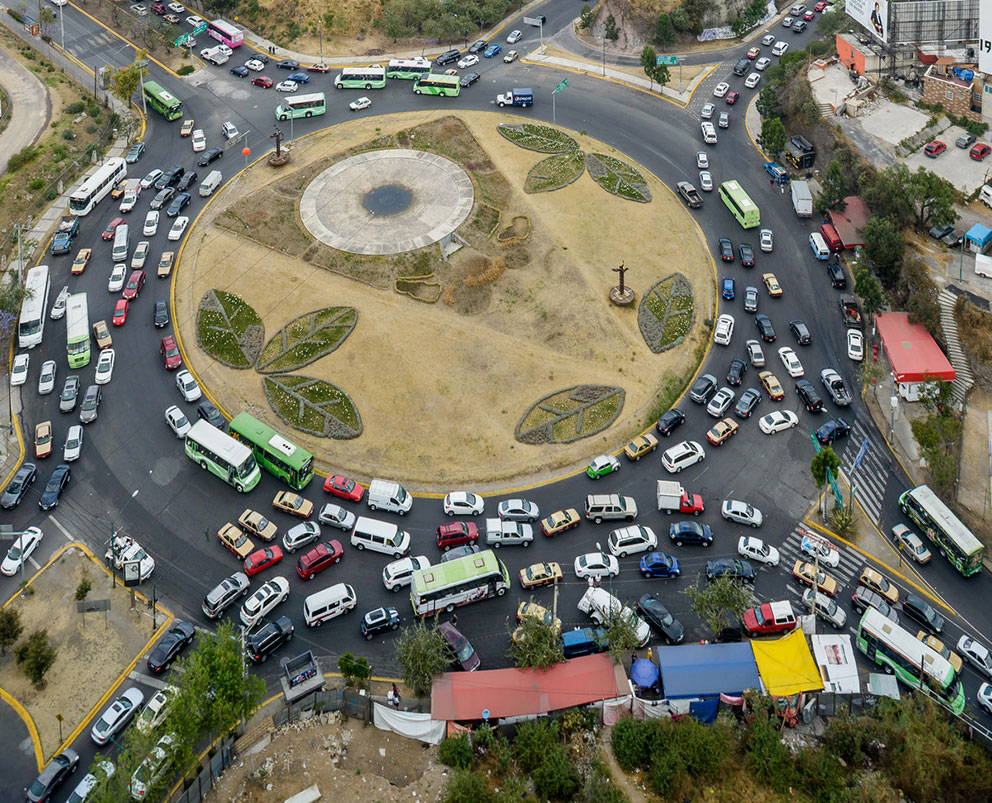 Schreckenberg researches the phenomenon of traffic hold-ups and is sure of one thing: the problem lies with humans, not with cars. Photo © Michael Schreckenberg

One driver brakes and all the others follow suit: this is how hold-ups happen. They move like a wave against the flow of traffic and seem to be unstoppable. Michael Schreckenberg is probably the best-known congestion researcher in Germany. Like other people, he is regularly stuck in a hold-up. “Often deliberately, so I can take a look at it.” At the University of Duisburg-Essen (UDE) he is dean of the faculty for the physics of transport and traffic. In his view, the problem is sitting at the wheel: “Drivers only think forwards, whereas ants think cooperatively.” So what lessons can we learn from little creepy-crawlies?

Franziska Queling: The longest traffic hold-up of all time was recorded just before the soccer World Cup in Sao Paolo: 344 kilometers. Mr. Schreckenberg, you devote yourself every day to what must be the biggest problem of all large cities: traffic congestion. How does a hold-up arise?

Michael Schreckenberg: Sometimes they are caused by accidents, road works and weather conditions. Most hold-ups, about 60 percent or more, arise through overload. Especially at interchanges and on uphill stretches, the traffic first of all becomes more dense and flows more slowly. If an individual then comes to a stop, as a result of over-reaction, being distracted or something like that, and therefore others have to stop because of that individual, a hold-up wave is caused. It moves backwards against the traffic flow at approximately 15 km/h and can change to another highway via access ramps. If people then switch lanes, they cause a further hold-up that they themselves do not even see. Drivers only think forwards. The best thing would be to take the human factor out of driving. That would really eliminate 10 to 20 percent of hold-ups caused by overload. Lots of things are being tried out here, with assistance systems, apps and so on. The technology can simply do it better. Human behavior in vehicles is not ideal. Animals can do it much better – this is evident in swarm behavior, for example in the case of ants.

Why are there no hold-ups on ant roads?

Schreckenberg: The essential difference between ants and humans is that ants are cooperative and work for the collective. The problem is the person at the wheel, therefore. In the anonymity of the vehicle, people indulge in actions that they would not otherwise take and often behave egoistically. The cooperative behavior of ants is more or less ideal and functions without a delay, they react directly. People always have a delay of one or two seconds between perception and reaction, by means of electronic assistance systems this delay can be compensated.

What can we learn from ants and their swarm intelligence?

Schreckenberg: Among automobile manufacturers there is already agreement about a certain protocol for communication between cars, especially for safety purposes such as warning about a hold-up that lies ahead. The car at the end of the hold-up reports it to the traffic coming in the opposite direction, which then takes this information and reports it to the vehicles that are approaching the end of the hold-up. We are already using this principle in our faculty for research on making traffic flow better. The next step is that the acceleration of cars, changing lanes and braking are synchronized. Today unfortunately not many cars are equipped with the technology for swarm intelligence to work, for example WiFi coupling. As soon as 15 percent of vehicles have this kind of car-to-car technology, the other vehicles will also benefit from it. 30 percent penetration of this technology would even be enough for all vehicles to benefit from swarm intelligence to the same extent and a maximum level of effective driving to be attained.

In which specific situations do people benefit from car-to-car communication?

Schreckenberg: Primarily on highways. The situation with highway traffic is that there is never really a reason to brake unless someone forces you to do so. So here it makes sense to base solutions on swarm intelligence in order to make the traffic flow.

How can swarm intelligence help in the urban environment?

Schreckenberg: Inner-city traffic is dictated by crossroads, traffic lights and other intersections. So the capabilities of car-to-x communication are helpful in cities. This means that cars communicate with traffic lights and the whole infrastructure. Moreover, an estimated 40 percent of hold-ups in cities are caused by the search for somewhere to park. To minimize this, here and there systems already exist with sensors in the ground or videos that tell the driver that a parking space is becoming free. If the parking-search traffic were eliminated, that would relieve pressure on inner-city roads enormously.

Where do you see the opportunities of autonomous driving?

Schreckenberg: People drive because they enjoy it. It won’t happen that one day everything is replaced by autonomous driving. In the future driving will continue to be an individual thing, but in annoying situations you can have the driving done for you.

What is your view on how congestion in megacities like Mexico City could be solved in future?

Schreckenberg: Swarm intelligence doesn’t make much sense there because hardly any cars are fitted with the technology. To minimize hold-ups, five to ten percent have to possess this technology. And that won’t happen in the near future.

What are the prospects if data are collected through smartphones, which a lot of people there own? Could swarm intelligence work this way?

Schreckenberg: As almost everyone has a smartphone today, it is the simplest way of communicating. The problem is that people don’t go along with it. Pure information is not sufficient to make swarm intelligence work. There also have to be concrete recommendations for action, and if they are not built into the technology of the car, it is doubtful whether humans, as autonomous entities, will go along with it. 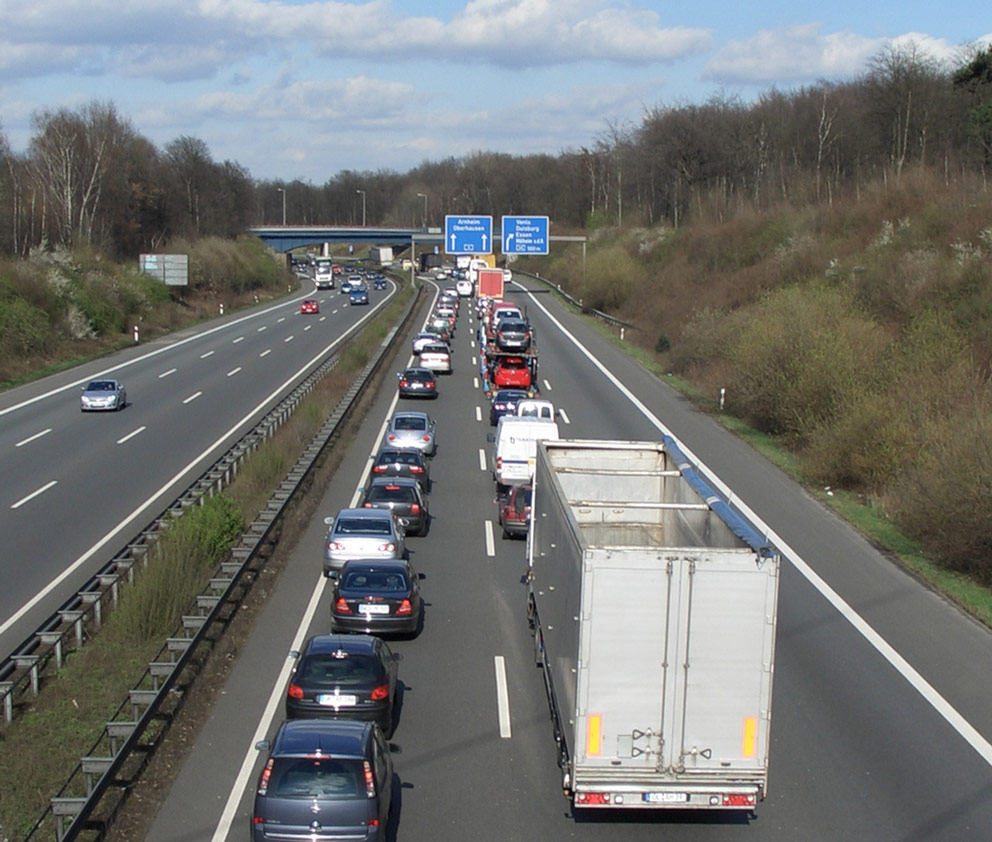 Congestion on the highways is common in Germany. Here we could benefit most from car-to-car communication. Photo © Michael Schreckenberg
Advertisement