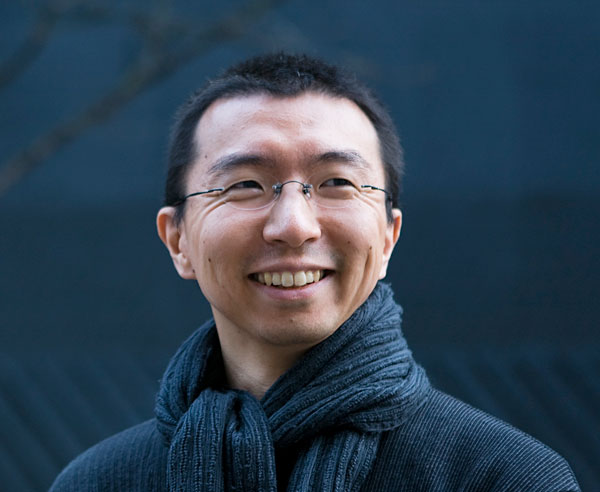 In 2008, the book "Primitive Future" written by the young Japanese architect Sou Fujimoto attracted the attention of people working in the design and construction industries in Europe because one of the projects resembled the “VitraHaus” designed by Herzog & de Meuron. The project by the name “Tokyo Apartment” is a building providing multi-family housing. Five dwelling units, each of them a small house in itself, are stacked facing in various directions. "Primitive Future House", another design by Sou Fujimoto, was selected for inclusion in the exhibition in 2010 by the Artistic Director of the 12th Venice Architecture Biennial, Kazuyo Sejima. Using floors stratified at 35cm increments he defied the conventional syntax of walls and ceiling, to orchestrate spaces of diverse and rich chiaroscuro effects. Ayako Kamozawa talked to Sou Fujimoto about his work.

Ayako Kamozawa: What motivated you to become an architect?

Sou Fujimoto: When I was in higher grade at elementary school, I read one of my father’s books, about Gaudi, and I discovered that architecture is not only about building, but also about being creative. I also liked physics, so at high school I read a biography on Einstein. I adored him because he was an innovator who formulated futuristic ideas and overcame existing things. Just as my heroes, the Beatles, did in the music world. Sadly, I couldn’t become a physicist or a musician. That’s why I decided to study architecture, though at the time I wasn’t familiar with Mies van der Rohe, Le Corbusier, or even Tadao Ando.

After you graduated from Tokyo University in 1994 you set up your own studio. Then you embarked several kinds of projects, including a hospital, houses, a library, and so on. Your works are said to have various styles. In other words, you don’t confine yourself to one particular style. What is the common denominator in your architecture?

Fujimoto: Before opening my own studio, I read many books on science because I thought that the method of establishing order would have changed by the end of the 20th century. And if this basic method were altered, architectural styles would change naturally as a result. As such, I wasn’t too bothered about actual styles. Far more important for me was to reconsider the relationship between architecture and man with a view to finding a new architectural order.

How do you think architecture has changed?

Fujimoto: Almost 100 years ago there was a huge paradigm shift initiated by Modernists such as Mies van der Rohe and Le Corbusier. They proposed functionalism, whereby one thing has only one meaning. It did away with all the waste, which was due to the radical affluence of humans. Yet wouldn’t it be interesting if a single thing had multiple meanings? This multi-tiered factor is the ambiguity we find in Japan. Japanese gardens are a typical example of this multiplicity in that they are composed of too many layers to really understand them. However, it would be nice to appreciate some of the intricate structures when we walk in gardens.

Does this ambiguity increase Westerners’ interest in contemporary Japanese architecture?

Fujimoto: I think there are special circumstances that allow Japanese architects to create such extreme buildings. Building regulations in Japan are less strict than in most Western countries. That is why these extreme buildings attract so much attention, yet I find it boring if people are interested in something simply because it is strange, such as Japonisme. Japanese architecture should try to get away from this. Kazuyo Sejima is different, however. When she creates something, even a house, it is with a completely different view on things, which pares things to the essence, but which at the same time nobody has thought of before. Her work not only teaches us practical methods, but also how to change the way we think. I must admit that she has been the greatest influence on me. I was simply in awe when I saw the Rolex Learning Center in magazines.

Do you think young Japanese architects changed after Sejima?

Fujimoto: Even if we don’t like to admit it, we are all regarded as members her school. That said, I am trying to break away from her big umbrella. For me, her style is too clear or too organized, an approach which makes her still a Modernist. I prefer a more complex architecture. I have recently been playing with the idea of how to express the complexity that is naturally inherent in cities or forests. I could create this complexity with a new order. When I designed the New Library and Museum at Musashino Art University, I tried to conceive it as a forest of books by arranging the bookshelves in a misshapen helical structure, among other things. Then I discovered that, walking around the library, I simply couldn’t stop exploring the entire building in all its details. It was an intriguing feeling.

At your exhibition in Tokyo in 2010, you focused on the forest as one of three elements with which to express the future of architecture and Tokyo.

Fujimoto: Generally speaking, cities have evolved gradually for hundreds of years. Whenever architects add something new to a city, it tends to destroy what before has been accumulated step by step, forming a layers of information, for example, traces of the city’s history and people’s memory. Architects cannot retain this. Tokyo, however, is tolerant in this regard. It is chaotic and makes us feel at ease. In this context, I could compare Tokyo to a forest because the forest is a field between order and chaos, it can initiate a new spatial model of information suspended in space. I showed architectural models and sketches of my works in a small room at the exhibition. They were displayed at various levels. Some were suspended from the ceiling, others were hung on the wall, and the entire room was crammed with objects as if walking under trees in a forest. Of course, I arranged the objects in a logical order and the relationships between the individual objects were such that they conveyed meaning. However, the distance between the objects was so small that visitors had to weave their way through them. This experience may have helped visitors perceive the inner space in my architecture.

Sou Fujimoto and ADEPT Architects from Denmark won the competition to design a new library for the Dalarna University campus in Sweden. This will be his first public building in Europe.

Architecture
Interview
Made in Japan 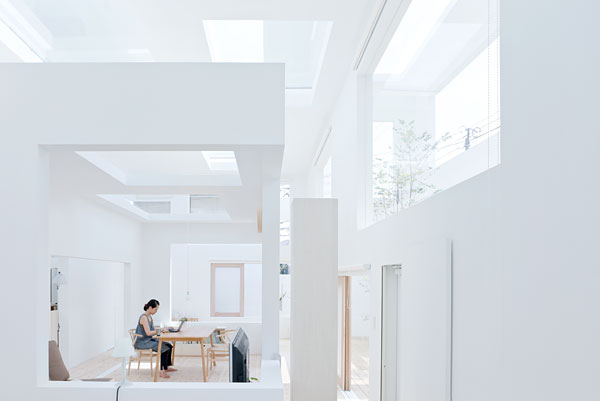 House N (2008) by Sou Fujimoto. By layering a few walls, the border between Inside and outside of a house became ambiguously. photo: Iwan Baan 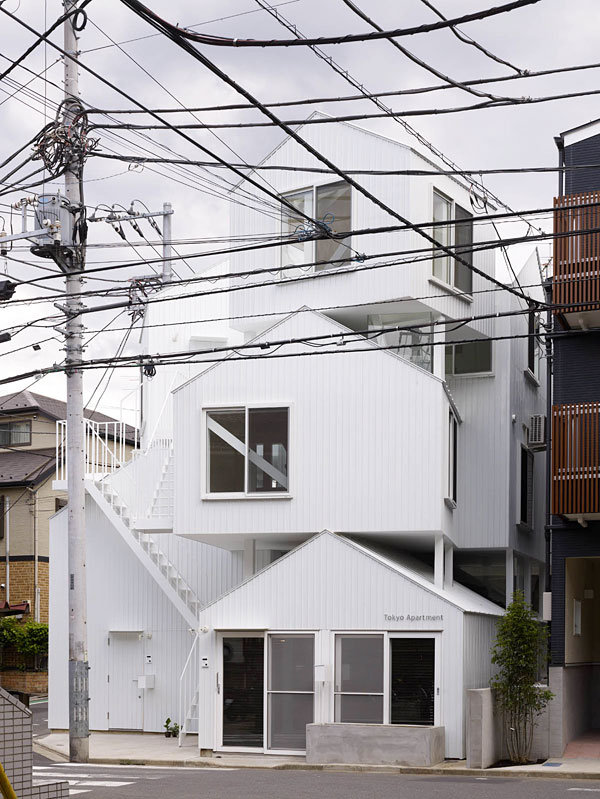 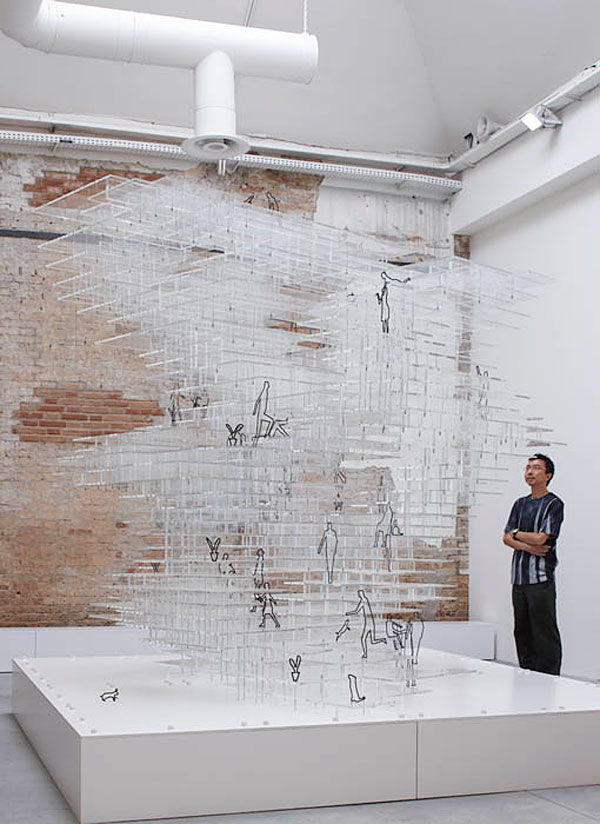 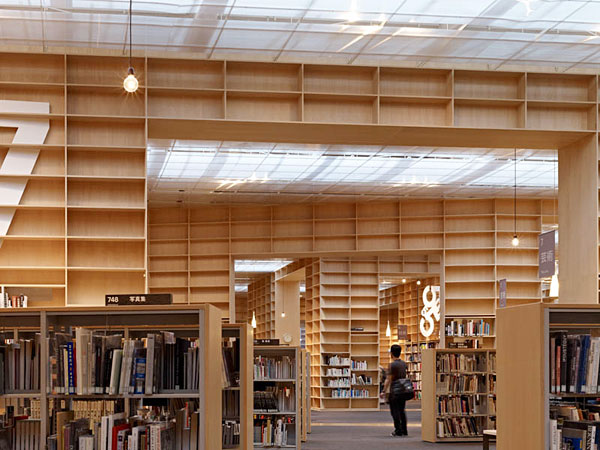