Let's get the basics for any article on Margiela out of the way first: Martin Margiela is a phantom. The Belgian does not grant interviews, there are hardly any photos of him, on the Web all you will find is a 12-year-old snapshot. He is the enigmatic Mr. Invisible who has an immense influence on the world of fashion. "Who is Martin Margiela?" runs the inevitable standard headline in reports on the fashion-maker. Rumor has it he often sits in the front row at shows - and no one knows it is him. Since founding his fashion company in 1988 in Paris he has firmly taken back seat to his team and the designs. Communications are always in the first person plural to emphasize the team process. No one can judge whether this is deliberate myth-making or the expression of a shy intellectual. And no one really knows whether Margiela himself actually works in his fashion company or has long since withdrawn from it. So. That is the basis for things.

Martin Margiela is widely considered the great conceptual spirit of change in fashion, the philosopher who with an investigative and serious method refuses to leave anything to chance, and upends everything that to date held true in the glamorous fashion world, with its craving for pure presence. As a matter of principle he breaks rules: His fashion is anti-fashion, his stores anti-stores, his label an expression of anti-marketing. His designs do not slake the fashion thirst for the dernier cri. They are the antithesis of the fashionable and thus not only exemplary for the world of fashion, in which often the mainstream is simply what Margiela provoked the prior year. Margiela takes up social trends, pre-empting developments and attitudes that are also to be found in furniture or product design in recent years.

It is a reflection of one of the major overarching tendencies of the last two decades that a fashion-maker could set the trend with rule violations and deconstruction: While the 1980s were still defined by the look of success, glossy perfection and the unblemished fresh-from-the-factory, since then we have seen a conscious break with the overly perfect, the representative, the unequivocal and the glossy. Like "New German Design" in the 1980s, which set out to challenge the insistence on "good form" in furniture design, Margiela also refuses to accept the conventions of his discipline. He broke with the boastful power-dressing like Droog Design did in the 1990s with a form of product design than had mutated into mere lifestyle. With seams turned inside out he rendered the making of the piece of clothing visible, foregrounding the craft involved, something furniture design has only recently rediscovered. He made the manufacturing process visible, as did countless product designers who have in recent years deliberately included traces of the manufacturing in their creations. By means of pieces of clothing whose coat of color slowly wore off in time, he highlighted the wear and tear of things - just as product design has since the 1990s returned to patina to imbue things with history and character. Margiela created clothing from plate shards just as Ingo Maurer did a few years later for his "Porca Miseria!" luminaire. He combined materials that had until then been considered as not to be combined, the way Hella Jongerius now does it with her vases. He deconstructed his objects and re-assembled them, just as Martino Gamper does with his Gio Pontis furniture. Margiela plays with the icons of fashion history, with the trench coat, the white shirt, the tuxedo - showing as little respect and yet as much reverence as numerous designers show to Bauhaus furniture or Eames chairs. He uses components and found items, built a waistcoat from gloves, the way the Campanas constructed an armchair from fluffy toys. For his 1996 Trompe-l'œil collection he printed clothes with photos of other items of clothing, just as Front at this year's Milan Furniture Fair presented Moroso sofas whose drapery was merely printed on them.

The white which Margiela uses for his clothes designs, not to mention for the furniture and in fact all the furnishings in his showrooms serves to make things disappear, while also heightening our attention to them, thus reflecting the designer's invisible presence. The white elides the strident presence of things, directing our eyes to the essence of things, just as Margiela outfits his models with sunglasses to render their faces unrecognizable by black censor bars, or has them pull stockings over their heads, while others tend to beautify their collection with the latest top model. The color white is no enhancing disguise, but a sign of the new beginning that in the course of time becomes brittle, and the cracks let us see traces of the past. He uses white paint to preserve the history of a place, such as the Paris head office, which, fittingly, was once a monastery. Margiela dips his surroundings in color the way Konstantin Grcic does with many of his items of furniture at the end of the design process, thus emphasizing their shapes. The white shrouds that in the Margiela exhibitions even cover the beamers refer to the fact that what counts is only the content - just as a few years ago Apple did the same with its iPods or MacBooks, which thanks to their whiteness are pure data memories become a mere envelope, a screen onto which we project associations.

The staff at the Margiela company also wear white lab coats: This is not some cliché-like attitude on the part of the couturier, who conjures up the entire collection with a few pencil strokes on paper. Here clothing is the subject of serious research, with identities being carefully constructed. Fashion is developed, distilled, condensed and fleshed given body. Objects are scaled in order to pinpoint their particularities. They determine the periodic system of fashion, systematize things and number the component parts. The Margiela staff create exact documentation of what they do, detailing how much time the production of a design takes. Concepts, ideas, found items, and materials all get packed in white crates, placed in white files, such as were on display in the Milan show. Margiela develops typologies that act as recurrent motifs in all his work: The dress form, the unfinished piece of clothing, or the frazzled seam. The Tabi boots, that make its wearer seem cloven-hoofed. The glittering of silver and the mirror ball, that do not resemble some gilded representation, but toy with the unabashed glitter of the 1970s, with a polish that disguises the medium and reflects the viewer. The world of Martin Margiela entails concentrated research for expressive forms for today - something to be found in the product design work of the likes of Konstantin Grcic, Stefan Diez or Jasper Morisson, whose studios function as the seedbeds of the new. The Margiela lab celebrates design as such a serious matter that you can likewise regard it as a parody on too much seriousness. But since design has become a synonym for arbitrariness and meaninglessness, so much seriousness can convey authenticity and credibility. It is a struggle to find the right thing, to adhere to his own convictions - something that has made designers like Dieter Rams suddenly re-emerge as cool superstars having for some time been considered by many as hackneyed. Yet: Would Maison Martin Margiela be a German fashion company it would without doubt seem very cramped and lacking in leisurely touch.

There is a dedicated periodic system for Margiela's different lines: A circle on the label, which is printed only with numbers from 1 to 23, to which line the respective item belongs. The label is then sewn with four stitches into the inside of the item in question: From the outside all you can see is the cross of the thread - which perhaps attracts greater attention than a large, strident logo. Margiela's label seam has become a micro-code that easily manages to bear before it the philosophy of Naomi Klein's "No Logo", or even to stand tall for a rejection of consumerism, while at the same time being an extraordinarily striking brand. Here, the lack of a label (elsewhere this would be a defect) becomes an expression of authenticity. It is the Muji principle that ensures special attention for the content by virtue of a lack of branding and enables the buyer to feel like one of the cognoscente who rejects all the label hype, finds huge logos revolting, and wants real values. It is a strategy of understatement such as can be found also in Alfredo Häberli's "by my side" bags, where the logo is on the inside and colored seams on the outside indicate the life within.

Only a small inner circle, that group of disciples typically in orbit around a superstar, knows Margiela in person. Anyone who is so secretive must be fascinating - it would be impossible that they are boring. The craving to become a member of the Margiela brand cosmos, that secret society, is greater than the desire to possess the labels that appeal to the mass with their huge logos and purport to be democratically accessible - for anyone who can afford them. Yet if you who can decipher the codes of the invisible, read the cuts and discern the recurrent motifs, then you can feel a slight sense of belonging to that world of the initiates, who cover themselves in dust and coats of color that flake off and whose religious affiliation can be seen from the four small, white stigmata on the fabric. It is a religion of the authentic, the belief of all those for whom fashion is not only a matter of staging identity, but also consider it something deeply steeped in intellect and transcendence. The symbols of which are therefore all the more desirable.

Martin, can you hear me? I don't care whether you are a phantom! I really must have the mirror ball seating ball from Milan. 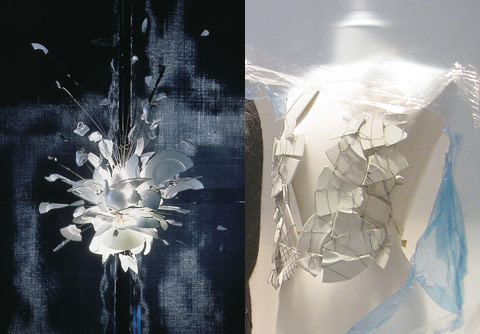 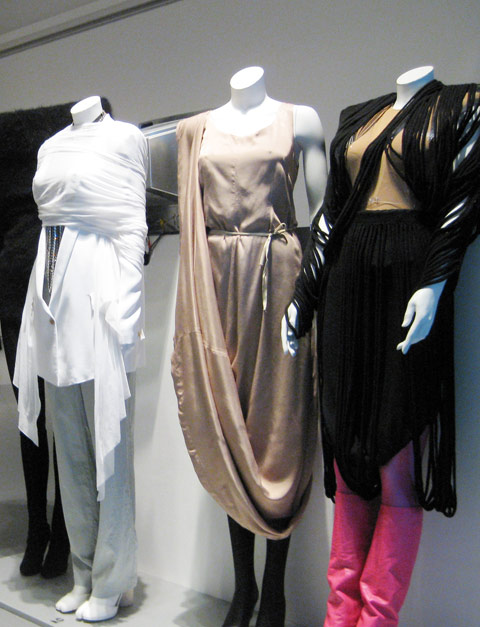 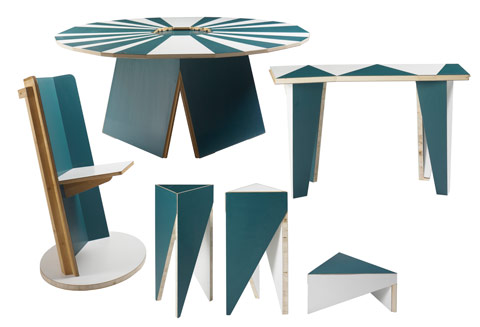 If Only Gio Knew… by Martino Gamper 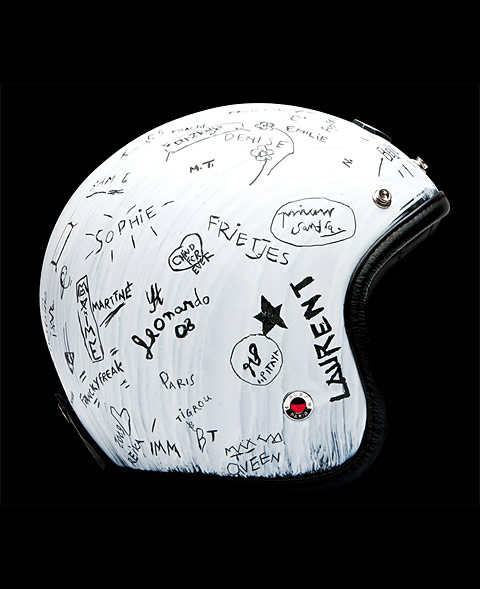 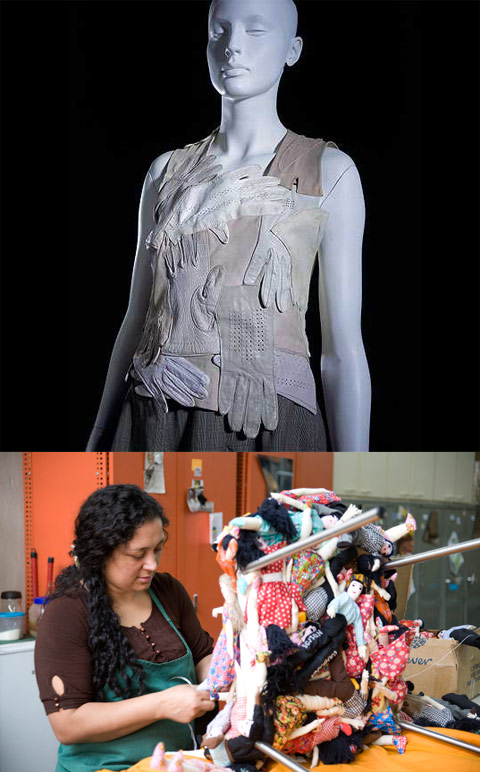 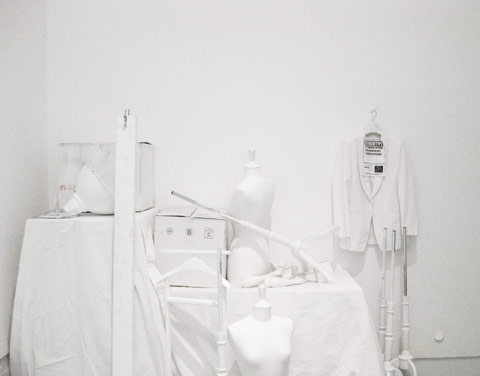 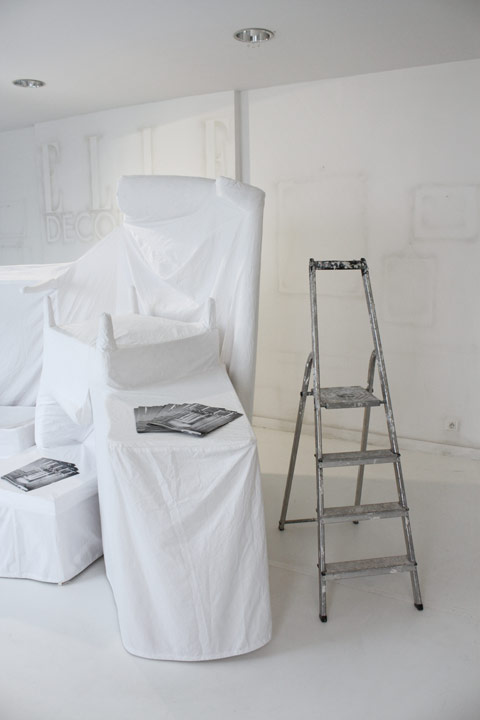 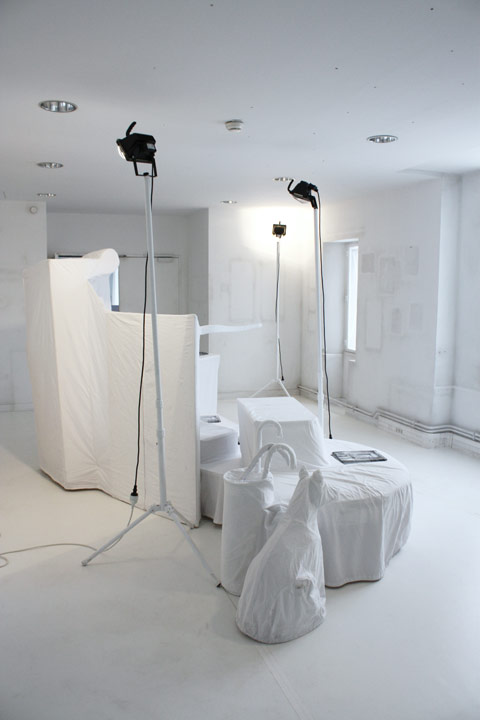 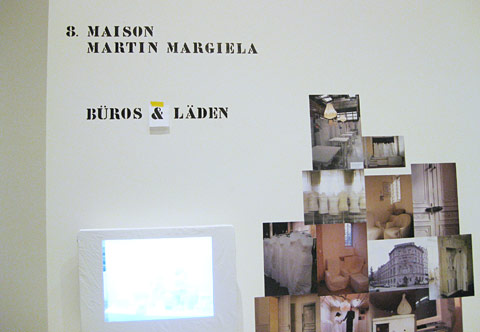 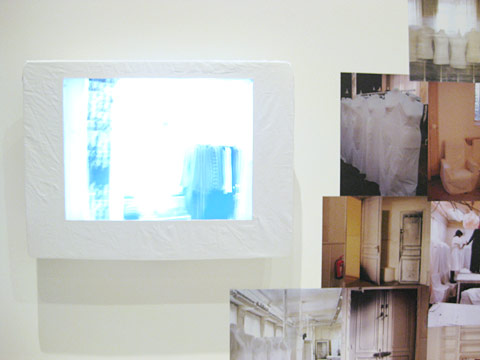 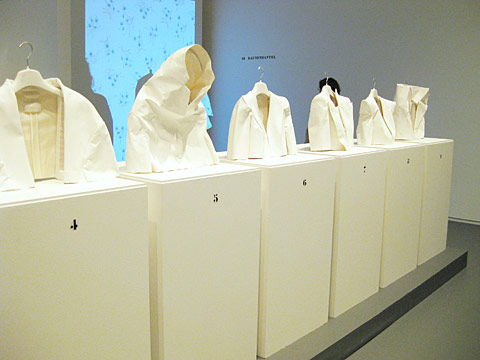 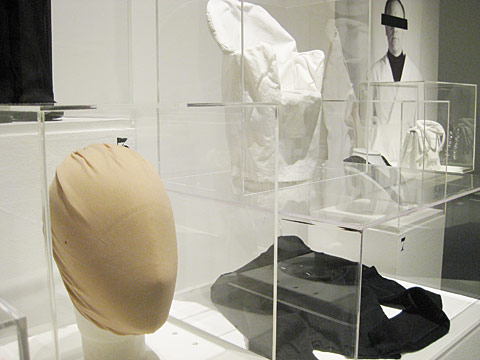 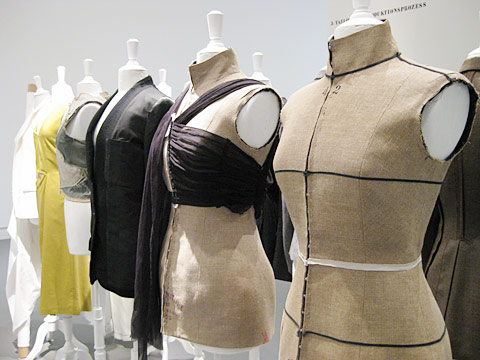 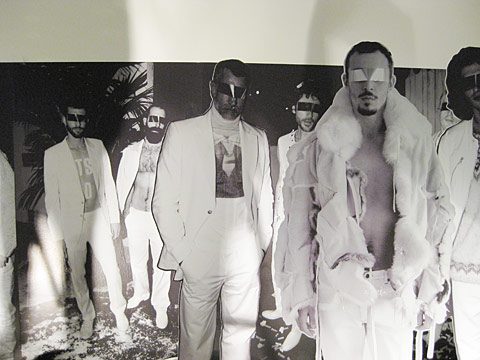 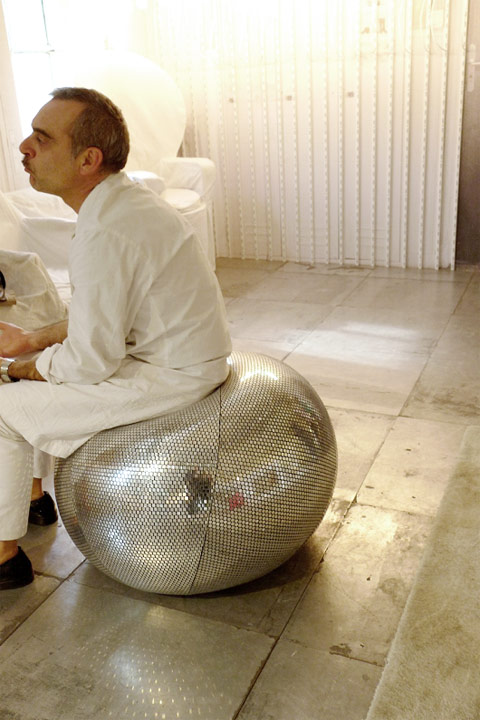 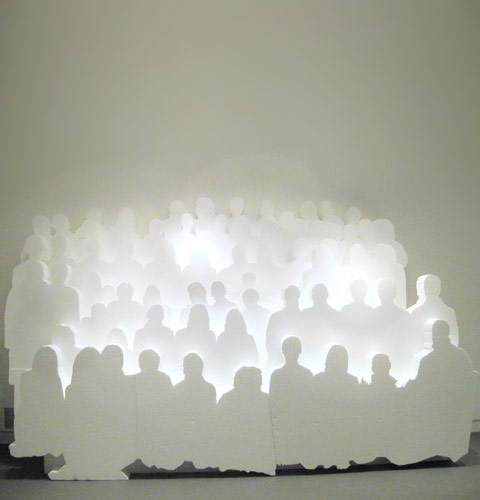 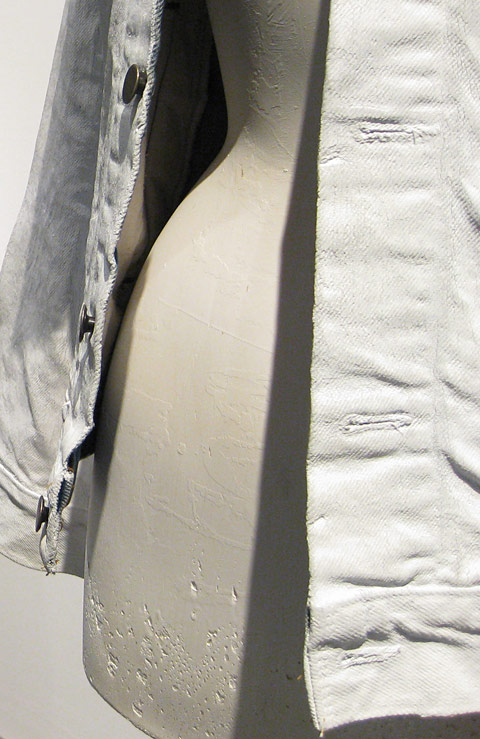 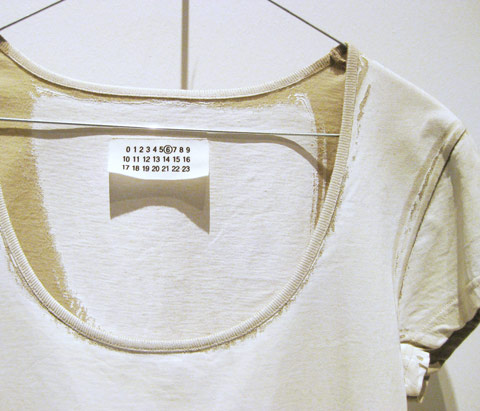 Maison Martin Margiela (above); Tensta Konsthall by Front Design (below)

Maison Martin Margiela (above); Groove Bottles by Hella Jongerius (below) 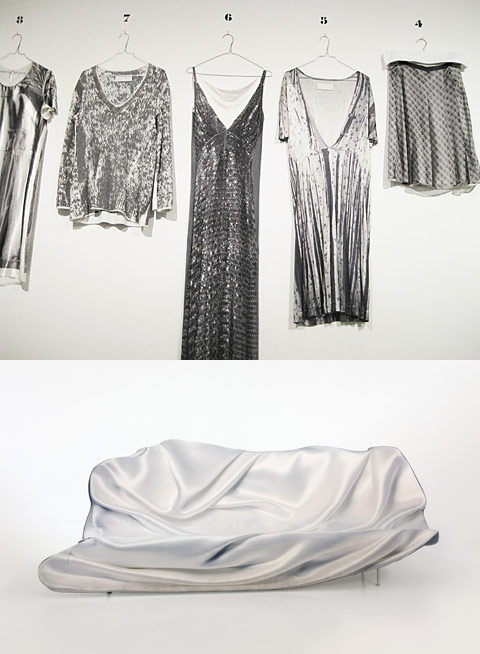 Maison Martin Margiela (above); Draped Sofa by Front for Moroso (below) 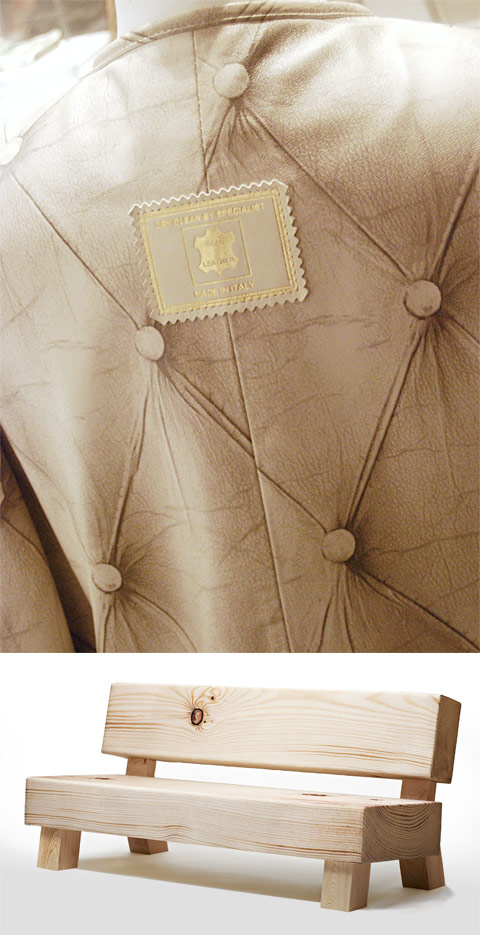 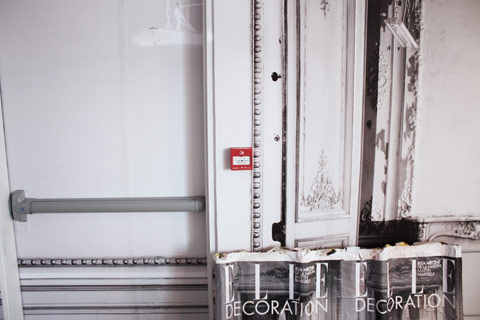 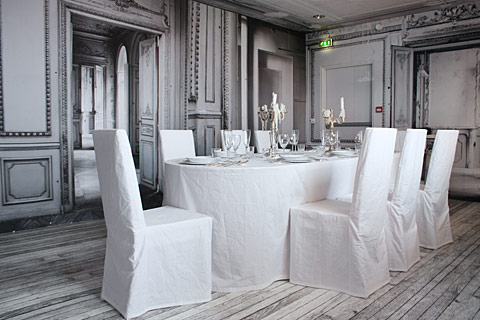 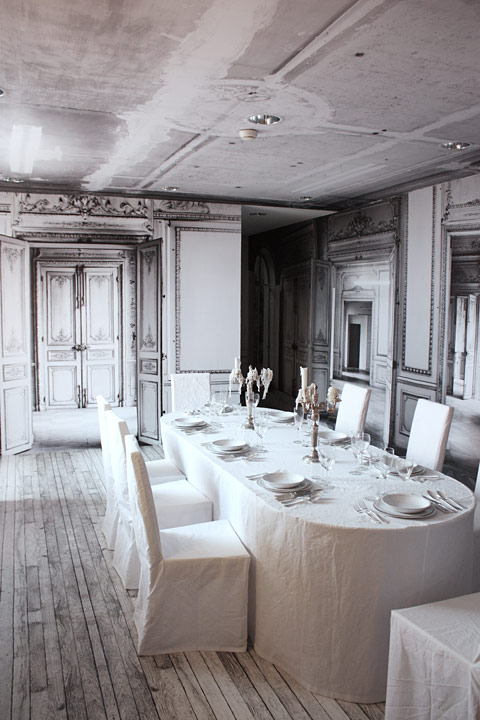 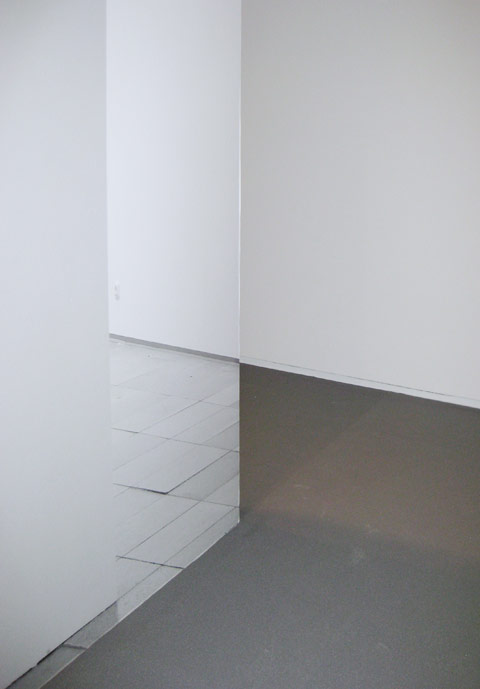 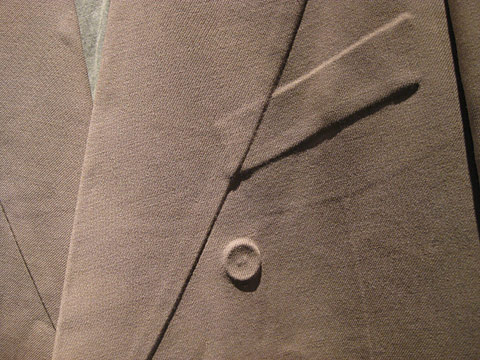 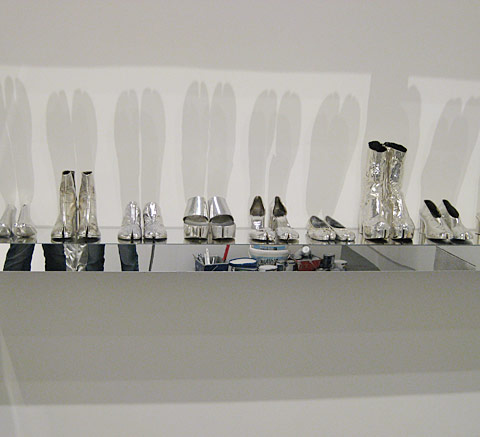 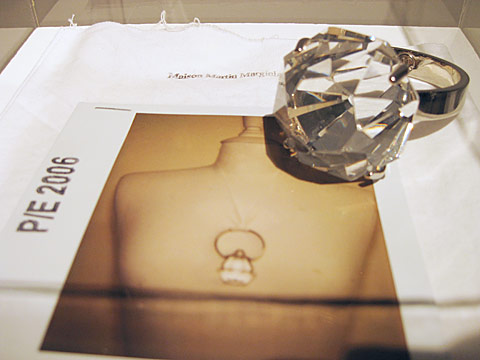 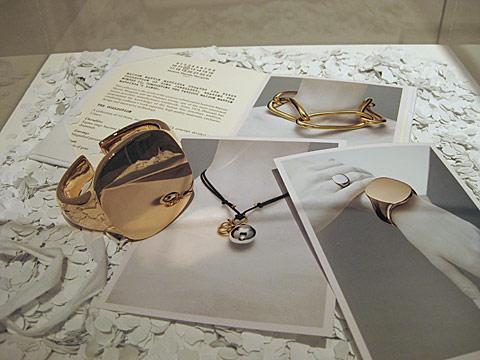