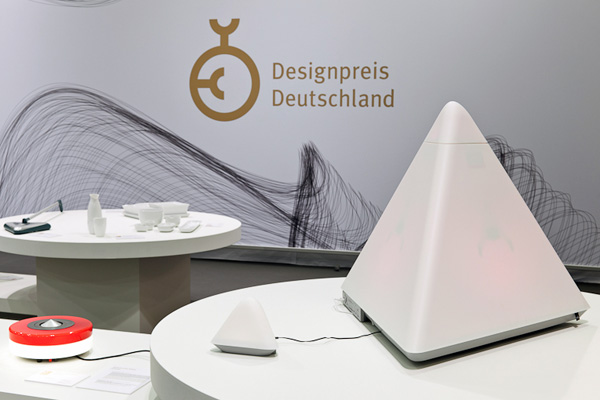 Anyone who starts a new venture would do well to design their product or structure their service in such a way as to set themselves apart from the existing market offerings. Today, it is precisely this concept that forms a central focus of any given design competition. How easily can one differentiate between the entrants? How great a role does design play? Is their entry persuasive? In order to honor good design, experts from the design arena come together to assess the work of other design experts, whereby a certain percentage of the entries receive an award. On the whole this is a rather ritualized approach, which uses set processes to create legitimacy without suggesting a greater claim to truth. Federal Minister for Economic Affairs Hans Friderichs (FDP) once wrote that "The consumer is the highest authority in a market economy. It has become apparent that the consumer is open to issues that encourage the formation of his critical awareness." That was in 1974.

At that time the German Design Council held a review of the first five years of the "Bundespreis, Gute Form" (national "good form" prize) and the minister not only adjudged that "design is a contribution to emancipation – or so it should be, in any case", but also outlined specific objectives: "Within the parameters and the provision of services of general interest as laid down by the state, there remains a broad sphere for the continuous re-examination of the results of economic trade in terms of their human relevance. Herein lies the task of the German Design Council and the meaning behind the national 'Gute Form' award." Today it is hardly conceivable that a liberal minister would use the term "services of general interest". The expression "human relevance" likewise appears a little out of place. And yet, collaborative work on the "Designpreis der Bundesrepublik Deutschland" ("Design Award of the Federal Republic of Germany") between the Federal Ministry of Economics (BMWi) in Berlin and Bonn and the German Design Council in Frankfurt has thrived in recent decades.

Now however the German Design Council has relaunched the "Designpreis Deutschland", the "German Design Award", which was only recently decided upon. It is modeled on the previous "Design Award of the Federal Republic of Germany" down to the last detail. The combination of word mark and logo, the composition of the jury, the nomination process, the planned award ceremony: all elements of the prize correspond perfectly to those of its well-established predecessor. The only differences are an increase in the prize money for winners of the Newcomer Award and a reduction of the participation fee. Are we seeing evidence of the old theory that certain privately-funded services are more cost-effective that those with financial support from the government? Or simply a loss of prestige and significance, reflected in reduced value?

As long-winded as it is clear, the Ministry's website states that "The Design Award of the Federal Republic of Germany is awarded by the Federal Ministry of Economics and Technology as the official design award of the Federal Republic of Germany." As of early 1969 the Council was commissioned to hold the annual competition, making the deduction of distinct rights to the brand rather difficult. In 2009, with permission from the BMWi, the Council registered the "Designpreis Deutschland" word mark and logo at the German Patent and Trademark Office under the registration number 302009032592. The logo is a shortened version of the award's title and with hardly any formal changes it now stands for a completely new award.

Confusion in the competition arena

For the public, who know little of the significance or the processes behind such design accolades anyway, this is all rather confusing. Many participants ("nominees") and winners of the new award obviously assume that they are participating in the official, state-funded competition, although they are simply applying to receive the German Design Council's private award. Over the past few days, numerous companies and design firms have been reporting that they have won the "2012 Design Award of the Federal Republic of Germany". Yet this award, which can only be licensed by the BMWi alone, no longer exists. In its place, the German Design Council has established the "German Design Award" as a new creation. If anything, a tactical mistake.

After the BMWi and the German Design Council had organized and hosted the award collaboratively for 41 years, in 2010 the Ministry decided in an unprecedented move to put out a public tender for the direction of the competition. The intention: every three years a new bidder would have the chance to plan and run the competition. In contrast to previous arrangements, the bidder would be required to bear the financial risk of the venture. In lieu of the allowance the Council traditionally received, in the future the Ministry would grant a service concession. In the (improbable) case that an organizer would make a loss on the new national competition, a precise deficit guarantee would be made available. And so, government promotion of design (which lastly constituted around 20% of the Council's budget) appears to be moribund.

In order to safeguard its own contribution to the development of the "Design Award of the Federal Republic of Germany", which it considered endangered by the BMWi's call for tenders, the Council decided to take action. The Council inquired at the Ministry as to whether there were any reason why it could not launch its own competition, to which the Ministry raised no objections. That this could be an open attempt by the Council to hijack the old award in some way in order to continue the tradition as its own brand, was not foreseen by anyone in the BMWi department responsible – VII A4 "Standardization, patent policy, invention promotion". However, this "copy" of the former collaborative project proved to be cause for disgruntlement there. In September the Ministry instigated proceedings for the clarification of the situation within the framework of trademark law. Since that time, the tendering procedure for the competition has also been able to continue after having been previously postponed. Five entrants have now made it into the final round and shall present their works at the end of October; a decision will be reached in the course of November. Owing to this "plagiarism" to the detriment of the prize-giver, the chances of continuing the traditionally close collaboration between the Ministry and the Council may be irreparably damaged.

From educational program to commercial enterprise

What began in the 1950s on the basis of associations and foundations that often received governmental promotion and support with the aim of anchoring the concept of design in the minds of companies and consumers has now developed into a prosperous commercial venture. There are now three main German organizers of international design competitions. The iF International Forum Design, with a diverse range of prize-giving activities, developed from the "Showcase of well-designed industrial goods", which was first held at the Hannover Messe in 1953 and was organized by the "Central Department for the Promotion of German Workmanship". In 1955 the "Permanent Show of Elegant Industrial Products" was held for the first time at Essen's Villa Hügel, which engendered the Haus Industrieform museum in Essen, which later became the Design Zentrum Nordrhein Westfalen. The solely private-sector organizers and the prize they award have since changed their name to "red dot". Red dot partner Peter Zec recently staged its communications award ceremony in the concert hall on Gendarmenmarkt in Berlin as a social event. iF International Forum Design is also facing major transitions. In the future the award ceremony is to be held at BMW Welt in Munich, while a new exhibition and event venue for iF is currently under construction in Hamburg's new HafenCity district. From now on, the traditional location at Deutsche Messe in Hanover will only be available to iF on a limited basis and the company will be moving into a new office in the city.

These competitions, which were once conceived as an aesthetic educational program, have been developed and extended into mechanisms of sales promotion, and with great success, at that. Only a small number of manufacturers who are committed to quality in design such as Vitra have now made the decision to no longer participate in design competitions. However, for new brands and manufacturers participation is more or less obligatory. Even regular participants have expressed criticism that organizers are constantly creating new categories, offerings and services in order to bump up their revenue. On the other hand, economic success for organizers remains beyond dispute, for such events pose a huge organizational challenge, while their award ceremonies encourage social cohesion within the design arena. Nevertheless, it is evident that little remains of the old fundamental concept – to promote the consumer's capacity to differentiate between products and services. But it must be noted that opportunists are now moving into position too. One publishing group, for instance, is offering accolades in exchange for money; in place of an independent jury, editors-in-chef and selected experts decide who is worthy of receiving an award. An economically promising project, which however remains highly questionable as far as content is concerned.

Ralph Wiegmann, Managing Director of iF, is one of the foremost critics of the state's former sponsorship of the "Design Award of the Federal Republic of Germany" as long as it ensued without a public call for tenders. The nomination process also came under fire in his criticisms. This is because the nomination process does not constitute a shortlist compiled by a jury, as is customary in other competitions, but requires the payment of a participation fee, which in turn allows participants to use the nomination logo for their own communication purposes. The nomination (in principle, an invitation to take part in the competition) is made on the basis of other awards previously received by the nominee. This practice alone was the subject of constant challenges by the German Design Council's competitors. On a public level, it remained extremely obscure that it was not the case of five, eight or ten nominees, but year for year up to 1,500 competition participants.

In an open letter from mid-July 2011, Wiegmann wrote of the risk of confusion between the "German Design Award" and its long-standing predecessor. "In the first instance, the official Design Award of the Federal Republic of Germany is still being awarded," he stated in the letter. In one issue, the magazine "Page" took the conflict as its editorial focal point, giving both the German Design Council's General Manager Andrej Kupetz and RalphWiegmann the opportunity to express their opinions at length. While Kupetz views Wiegmann's letter as a violation of the "rules of business decorum" and wonders whether an "iF Award could in the future still suffice as a basis for nomination for the German Design Award", Wiegmann wonders whether the economic parameters for a new Design Award of the Federal Republic of Germany had not been "extremely modified" and as a result the competition "irreversibly impaired".

Deliberations on this issue are already underway at the Ministry of Economics. Should the new official prize incur losses due to a decrease in the number of participants, they will consider a clarification of the legal framework surrounding a civil claim against the Design Council. This isn't good news for the promotion of design in Germany. The competition of competitions is heating up; what are and what could be additional objectives of design promotion and how the accomplishment of such objectives could be financed – the debate surrounding these issues is yet to begin.

Read also:
Our interview with Andrej Kupetz: "So anyone who to read the documents ..." 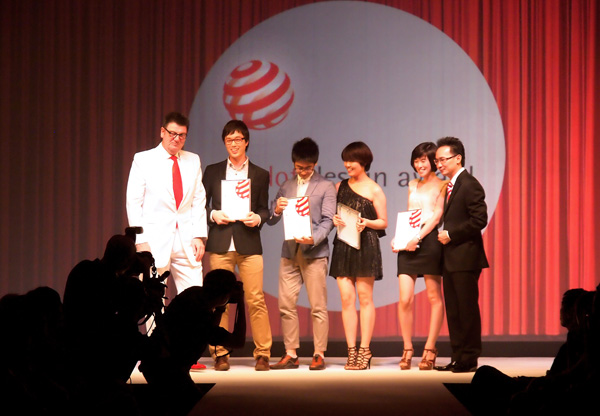 The award ceremony of the red dot looks like a gala show, photo: Red Dot 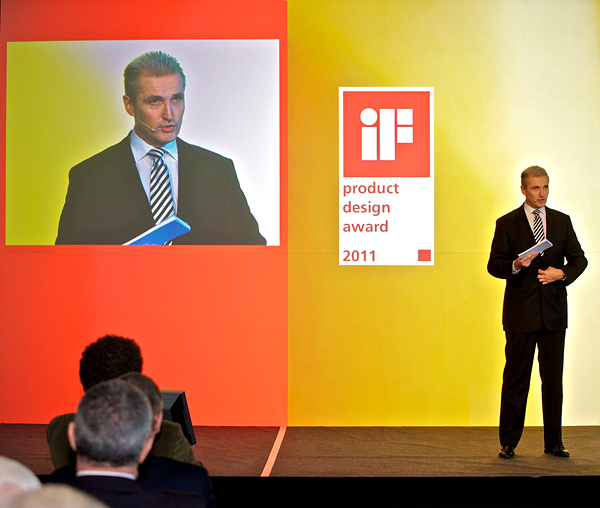 iF Design: the awards ceremony at BMW World Munich, photo: iF Design
Advertisement