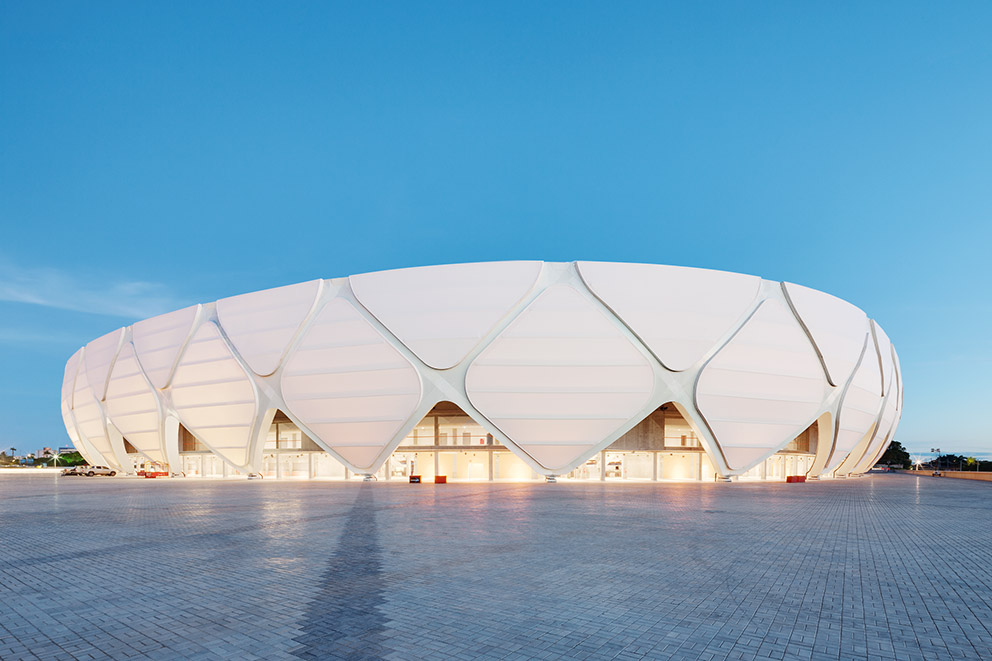 The Arena de Amazonia in Manaus, Brasil, with a membrane surface made of glass/PTFE. Photo © CENO Tec

New construction materials such as textile-reinforced concrete and other fiber-based materials are especially light, resist corrosion, and possess key advantages over steel. At this year’s Techtextil in Frankfurt/Main scientists and manufacturers are presenting current trends in architecture and showing what the future of textile construction may be like. 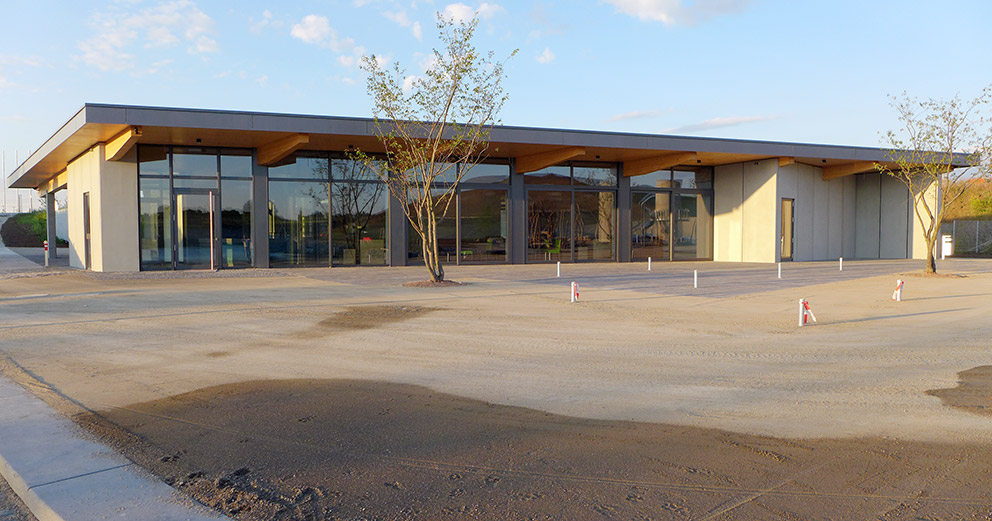 Inside they serve Spätzle, at the outside fibre: Façade of the restaurant with textile concrete slabs in Dormettingen, Baden-Württemberg. Architecture: Fahrner and Kölmel, Balingen-Ostdorf. Photo © Solidian GmbH 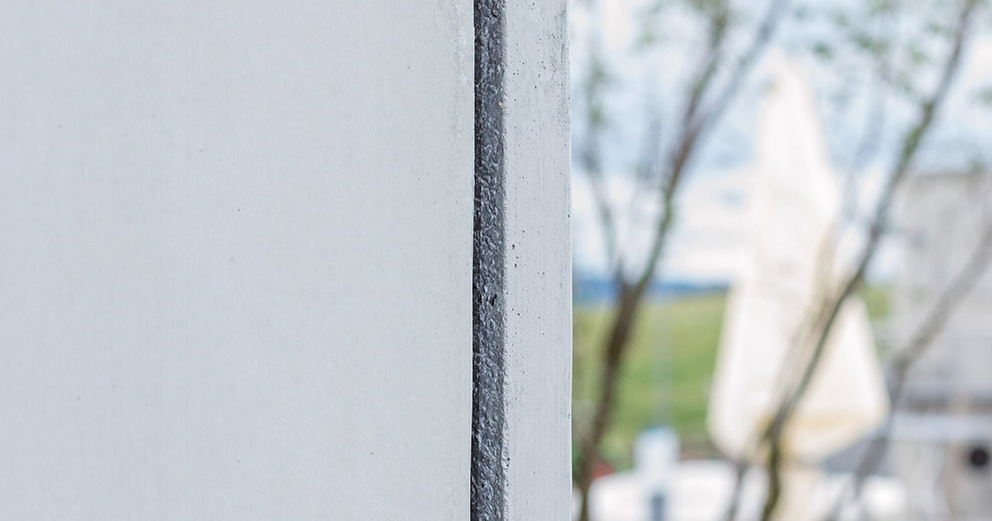 Detail of the façade slabs – The alternative material, ferroconcrete would have been not only twice as thick but also twice as heavy. Photo © Solidian GmbH

Some of the new textile construction materials have already been successfully deployed, such as for the new-build restaurant “Am Schiefersee” in the Schiefer theme park in Dormettingen in Central Germany. Architectural office Fahrner und Kölmel realized a frontage sized a full 400 square meters using textile concrete façade panels. The fiber-based panels, each about four meters long and only 50 millimeters thick, weighed 50 percent less than reinforced-steel versions and saved half the concrete.

“The project enabled us to demonstrate the potential that textile construction methods offer as regards saving materials and resources,” comments Christian Kulas, departmental head for textile-reinforced concrete at Solidian GmbH, which took part in the undertaking. The company was purpose-founded to foster textile construction methods in 2013 by Groz-Beckert, a long-standing firm that makes products for textile manufacturing and joining technologies. But what exactly is textile-reinforced concrete? 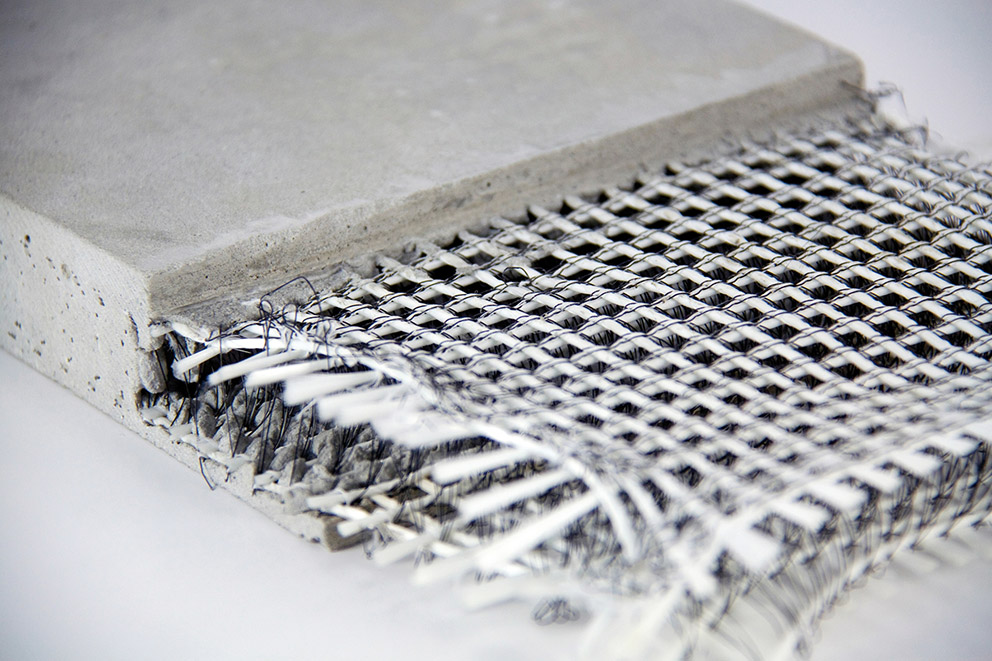 Glass fibre prepregs: A view at the inside of the textile concrete shows the grid structure quite well. Photo © R. Thyroff

Fiber grids instead of steel

Usually, grids of steel reinforce the concrete, lending a structure stability and compensating for the fact that concrete can’t be tensioned. In the case of textile concrete, and R&D on it has taken over 20 years in Germany alone, the 2D and 3D mesh of textile does the job, hardened using fiberglass or carbon fibers. There are immense advantages: Steel rusts and therefore has to be clad in tons of concrete – textile concrete, by contrast, is non-corroding, meaning it is less prone to rusting and cracks caused by salts, water or other environmental factors. As a result, it is more durable and also lowers maintenance and modernization costs.

Textile reinforcement is not just far more stable that steel, but requires far less protective concrete (which in turn reduces transport costs) and use of materials and resources is significantly lowered, as are CO2 emissions. Given the improved properties of textile concrete and its workability, the result of thinner structures delivering the same tensile strength, it can be used in more flexible and filigree ways, even enabling highly angled shells to be constructed. 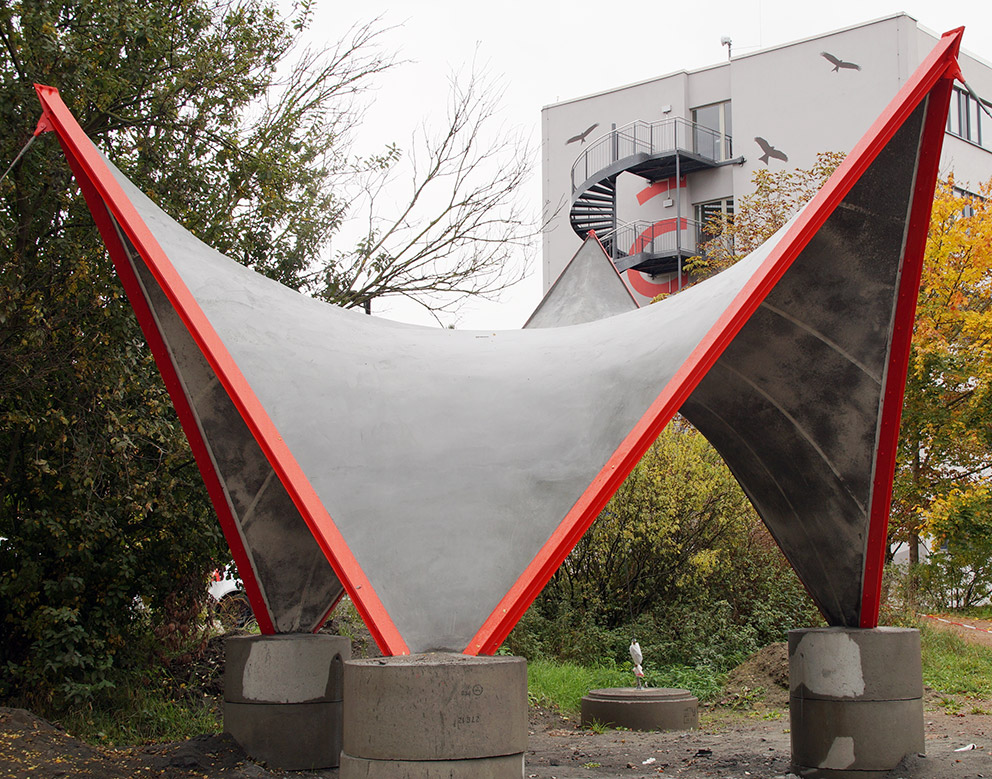 Filigree and aesthetic: a prototype of shell, developed with a patented manufacturing method at the university of Anhalt. Photo © IMS e.V.

Symbiosis of carbon and concrete

The symbiosis of carbon and concrete leads to a new approach to construction, emphasizes Chokri Cherif, Director of TU Dresden’s Institute for Textile Machines and High-Performance Textile Materials Technology: “The concrete structures of tomorrow will stand out for their refined, light and aesthetic properties,” he says. The German Federal Ministry of Education and Research (BMBF) is likewise convinced that the light construction material has a strong future: In summer 2013, 45 million euros were provided as a grant to the “C3 – Carbon Concrete Composite” consortium, which currently has 119 partners, all dedicated to making construction and maintenance more economic, more efficient and ecologically sustainable.

In future, construction textiles will increasingly play a role in architecture. For example, in 2014 the Deutsches Institut für Bautechnik (DIBt), the German Center of Competence for Construction, gave the green light for carbon-fiber-reinforced lightweight structures for the first time and also issued approval under construction supervisory law for the process of reinforcing ferroconcrete with “Tudalit®-Textilbeton”. “It was a milestone,” comments Roy Thyroff, Managing Director of Tudalit-Textilbetonverbandes and V. Fraas Solutions in Textile. Developers, architects and planners can henceforth use the new material for interior applications and a corresponding training program has already been established at the Europäisches Institut für postgraduale Bildung in Dresden. Further approval applications are in the pipeline. At present, Solidian department head Kulas reports, DIBt is busy, for example, evaluating sandwich frontages, complete prefabricated garages and even entire pedestrian footbridges, and approval is expected to be forthcoming as early as 2016. 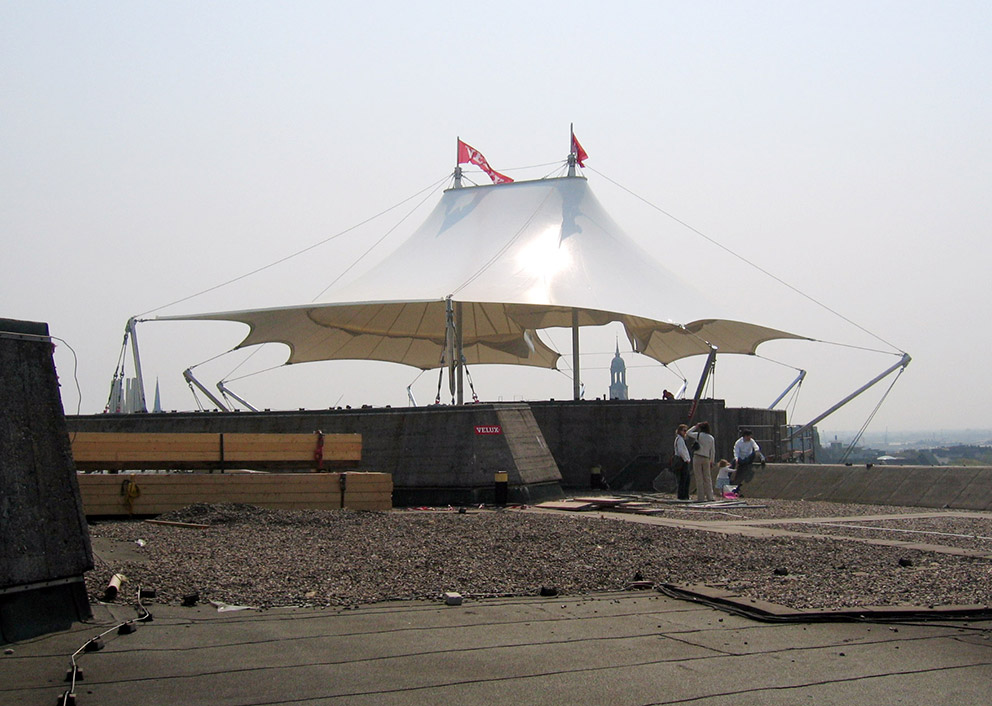 Textile membranes made in Germany are shaping halls, sports stadiums and airports all over the worlds since decades – here the Medienlounge Hamburg by Ostermann Architekten with H. Fletcher, Hamburg 2006. Photo © IMS e.V. 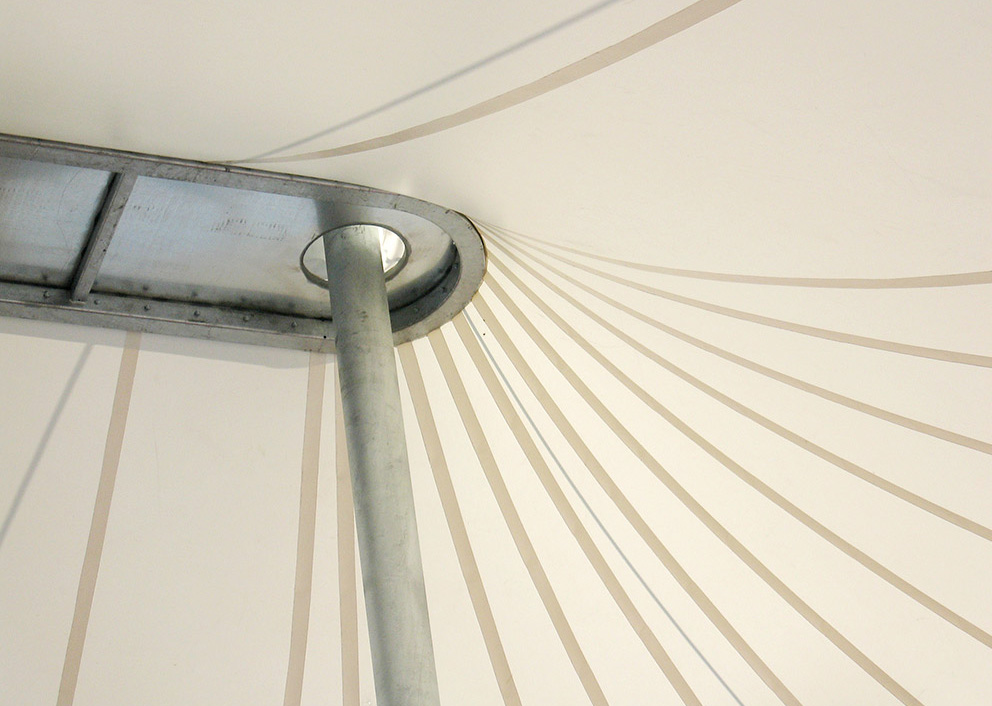 Detail of the anchorages of the Medienlounge. Photo © Ostermann Architekten with H. Fletcher

Research as the foundations

While gigantic stadium roofs consisting of so-called textile membranes, bright and colorful façades made of textile concrete, as well as textile insulating panels and roof lagging have long emerged as heat insulating or greening options, all of them have required many years of R&D first. In fact, construction and architecture are not the first segments where fibers have made real inroads: “We’ve already seen the aerospace and auto industries go for lightweight construction materials in the form of technical textiles as a meaningful complement to classic materials, indeed in some places as a substitute for them,” comments Klaus Jansen, Head of the Board of Trustees for textile research in Germany, Forschungskuratorium Textil, which is an umbrella organization for the 16 institutes researching textiles in Germany today.

Current research projects focus, for example, on the use of natural fibers such as flax or hemp for insulating materials that are identical to natural ones and for new builds; on textile construction materials for houses that generate energy and/or are independent of other energy sources; on self-cleaning building surfaces; on lightweight structures that emulate bionic models; and on textile-based sensors. These are expected to enable future fiber-based buildings/sections of buildings to be equipped with additional, smart functions such as lighting, moisture or stability monitors, heating, smoke, fire or water detectors. The future of textile construction – has long since begun.

“Fabric makes home“:
Membrane constructions give a new sense of lightness to architecture.

“A new architectural skin“:
Architecture has rediscovered the possibilities of textiles.

“Fresh from the textile lab”:
A tour of the experimentation into textile construction.

“A stitch in time”:
Smart textiles and luminescent fabrics at the Techtextil 2015 in Frankfurt am Main. 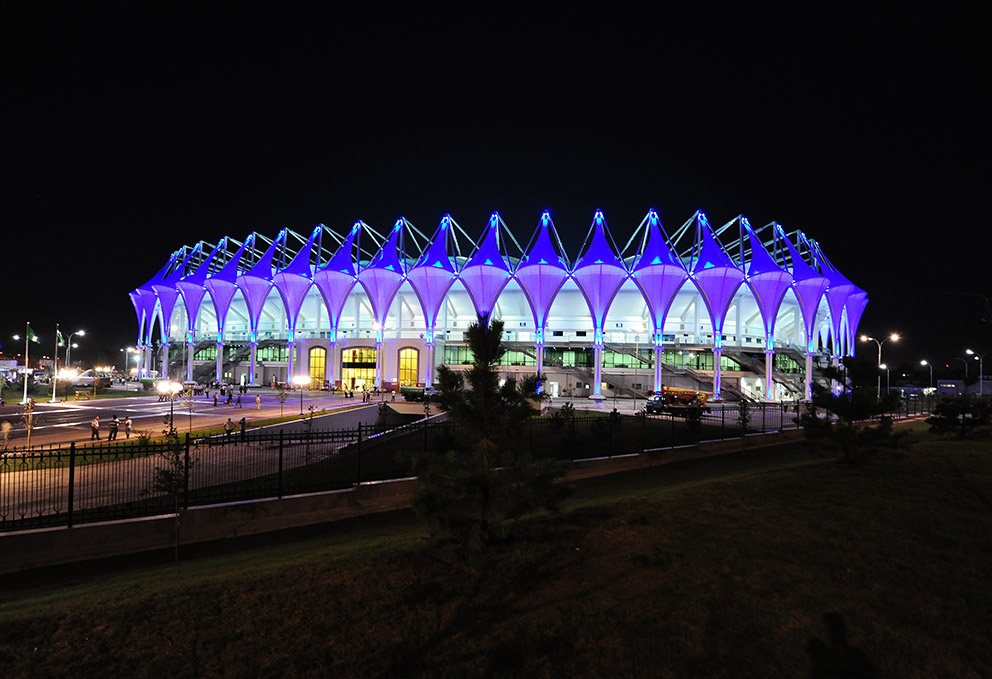 The stadion Buyodkor in Taschkent, Uzbekistan with a roof construction made of 64 façade sails was built in 2012 by Sattler Architects. Photo © CENO Tec 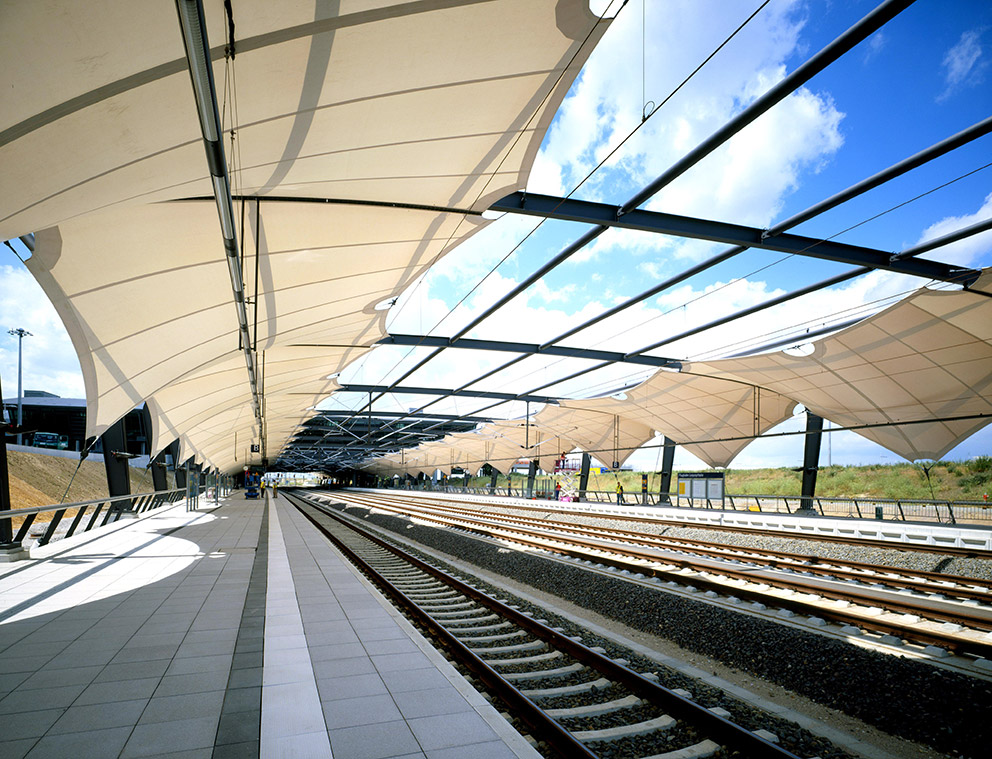 The station at the airport in Leipzig with a roof construction made of sails. Photo © CENO Tec
Advertisement