A curtain is a curtain is a curtain is a curtain, Gertrude Stein would have said. The newly designed historical Metzler Hall in Frankfurt's Städel-Museum nevertheless does not seem as if its walls were clad with a curtain hanging in folds. Because Thomas Demand has not suspended a curtain in front of them. Rather the curtain has disguised itself and has become a photographic image of itself that bears the simple title "Hall". Come as a surprise? Not really. Not at least to those who know the oeuvre of Thomas Demand, born in 1964 in Munich; while he does not like to be called a photographer, he is definitely not one of your usual sculptors and most certainly not a painter. In recent years, curtains have started to play a stronger role in Demand's oeuvre. For example for his major exhibition in Berlin's Neue Nationalgalerie, where it alluded to an idea Mies van der Rohe had for structuring the transparent building whenever required and covering the windows. While real curtains already formed a part of the overall staging of his photographs, the curtain in the Metzler Hall is now itself an object of artistic endeavor. Magritte would now doubt have liked the piece, which is most certainly not a pipe but equally certainly not a curtain. Or should we follow Austrian playwright and novelist Thomas Bernhard and ask: Is it a tragedy or is it a comedy?

Just before Christmas, Demand presented his piece in the Metzler Hall on the occasion of a panel discussion with Martin Engler, the Head of the Städel-Museum's Contemporary Art Collection. Or rather, he skirted round it and very cleverly avoided committing himself, which means nothing more than that he presented himself as an artist who is as knowledgeable about the discourses on the status of things and images as he is on issues of authenticity. Demand would not be Demand if he did not know every trick of the trade of self-stylization, whereby what was so ingenious about his off-the-cuff remarks (with all their twists and references) was that, as with his works themselves, he both constantly insisted on being the forever learned artist and on rejecting precisely such a status.

In his introduction, Max Hollein, the Städel's Director, had already captured the real essence of commissioning the piece and what was special about finding an artistic solution for a work for the lecture hall that nevertheless left the hall fully functional, when he said: "Basically it was an unreasonable demand." Which is why Demand also talked about why his wall covering that depicts a curtain simply had to be regarded as a background that had to insist on being different to the other works (including his own) in the museum's collection. A hall, Demand declared, is filled not by an artwork but by its use. After all, an event in the hall should not "have the rug pulled out from under its feet by what the artwork sets out to achieve".

Once again this simply left listeners stuck for an answer, as it tied them up in yet another inextricably knotty paradox. The claim that the decorative piece is a work of art, and not simply a piece of interior furnishing, was permanently being reinforced while Demand also did not miss an opportunity to deconstruct precisely that claim. Thus he spoke of the curtains that disguised walls which he had spied in the Galleria dell' Accademia in Venice, of paintings by Old Masters which depict the folds of clothes in the selfsame way they do velvet curtains and are considered symbols of mastery, of gestures of rulership and the power of disguise, and finally of the promise that it might still be possible to reveal what is concealed behind the curtain. He also spoke of the long tradition of color coding, of the fact that for his curtain picture he only chose (a somewhat washed-out and somehow artificial) purple because he had not wanted to compete with the iconography of a "divine red" and a powerful color would have easily seemed a bit vulgar. A touch of festiveness is what distinguishes his curtain picture, he said, which arose from the photograph of a curtain made of paper and then photographed in the studio. That is until he himself stated that "please don't think it is a curtain; it's the image of a curtain."

Astonishingly, all evening there was no talk of "applied art" let alone of "interior design" or "interior furnishings". No one doubted for a moment that what was involved was art and nothing but art. It was evidently not important whether there was any difference here to, for example, the sofa of created by the "Front" designers, which comes resplendent with the image on it of folded covers. After all, we were in the Städel and in Frankfurt's Museum of Applied Art. In an art museum what you see is obviously art, and what an artist does is also obviously art, even if it is a commissioned piece and, to really floor things, is used as a wall covering.

Praiseworthy mention was nevertheless made of the fact that the wall-curtain image was created in cooperation with and support from Danish textile makers Kvadrat, of the fact that the product was not wallpaper but a textile print realized on fabric. "Without Kvadrat," Demand said, "we would not have been able to realize the project." The photo taken in the studio was transposed by transfer printing onto the synthetic textile wall covering and the printed fabric was then stretched onto upright panels that are fixed onto the wall by magnet. 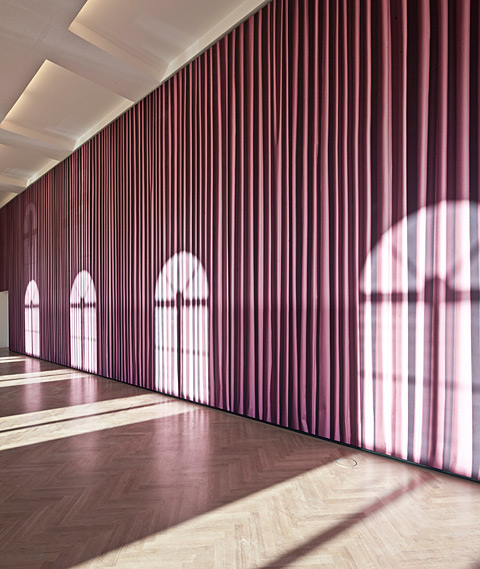 Only in front of doors and windows there is no curtain, photo: Norbert Miguletz © VG Bild-Kunst, Bonn 2011 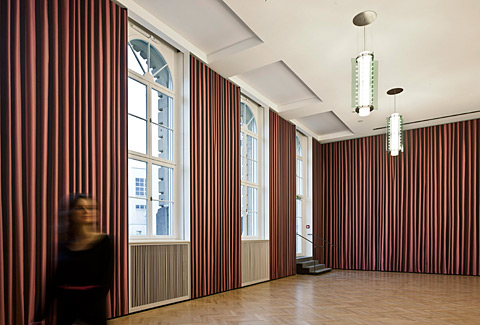 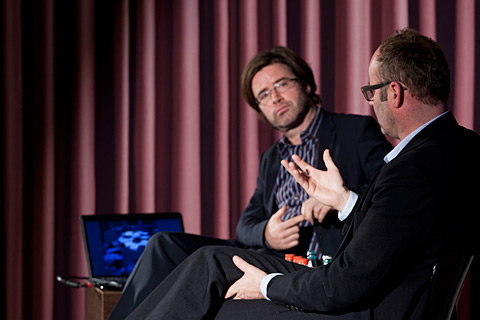 A hall, Thomas Demand declared, is filled not by an artwork but by its use, photo: Norbert Miguletz © VG Bild-Kunst, Bonn 2011 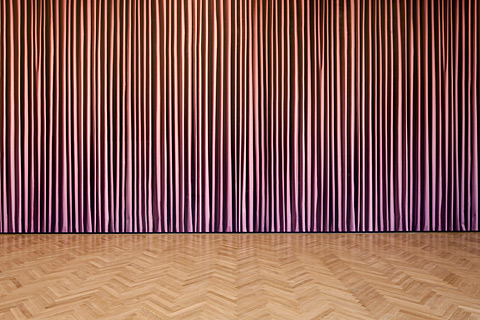 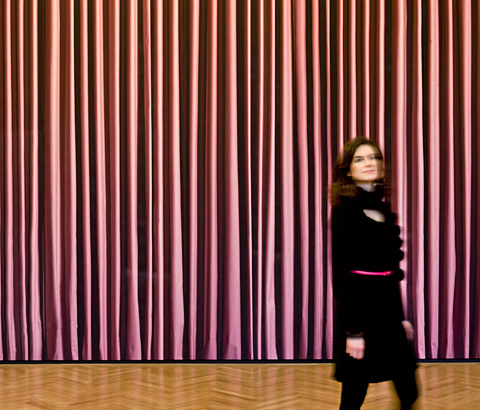 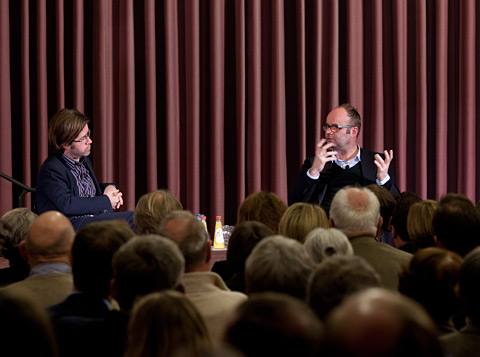 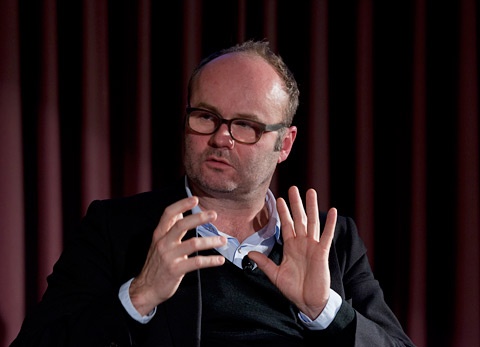 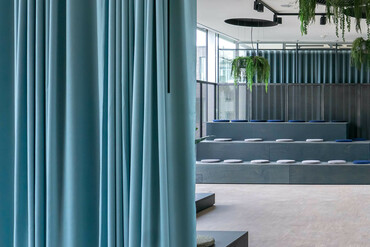 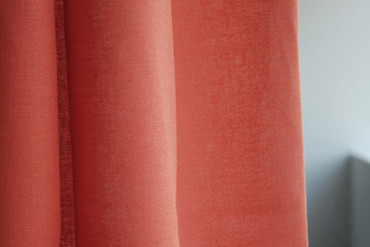