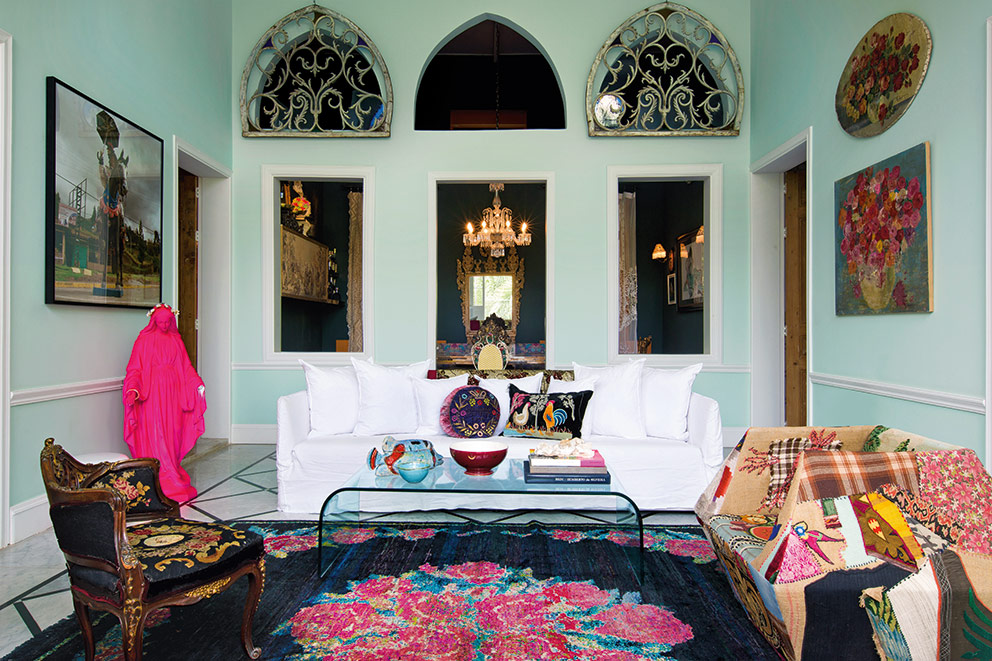 Beirut is teeming. The colorful metropolis on the East Mediterranean coast shimmers and bleeds simultaneously: Old Ottoman buildings stand resplendent between Christian cathedrals, synagogues and mosques, high-rises soar up in a cyan blue sky – while suddenly in the midst of this long-standing city fabric are the gaping wounds left by 15 years of civil war in the 20th century. “This city is full of indescribable ugliness and unspeakable beauty. It is a daily battle living here. But if you love Beirut, you also get a lot back from it,” explains Maria Hibri passionately.

Defying all Western prejudices about Oriental women being oppressed, for this designer a home and a family has certainly not dampened her female zest for creativity: As an 18-year-old she married and had three children. Later she traded in furniture and objects between her home town of Beirut and New York – until in 2000 she teamed up with like-minded Huda Baroudi to found the Bokja Design label. With a clearly formulated mission: “We Lebanese should appreciate our cultural heritage more. Because it is a great heritage!” Ever since the Bokja team has been busy transposing the colors and shapes of the country on the shores of the eastern Med into a zeitgeisty vintage aesthetic – and in this way flying a small, if consciously colorful flag next to the bitter experiences of war. Hardly surprisingly, pure confidence wafts through Maria’s home in the heart of Beirut. When she married for the second time five years ago, the past seemed to loom overwhelmingly in her house: “It was time for a new life. But I simply couldn’t bring myself to move into a new house, one without a soul. Back then I lived in what had been the British consulate building where much was in flow – so I first had to find something similar.” And find it she did, in the Achrafieh district, a kind of “SoHo” in the Lebanese capital, in the midst of an oasis of historical buildings. The fact that they survived is down to the far-sighted vision of a marvelous woman, Lebanese-British aristocrat, patron and sponsor of the arts Lady Cochrane Sursock. Together with her family she has done much to preserve Beirut’s historical architecture, in particular the houses close to her residence in the city, Sursock House.

When Hibri first entered her future home, a magnificent Lebanese building with rooms up to six meters high and the typical arcaded windows, it was love at first sight. To this end, she was even prepared “only” to rent the property. Moreover, the 250 square meters across two floors were very different from the English house with all its nooks and crannies. “There were no more corners and corridors where I could hide. One room led to the next and in the old tradition they were all grouped around a large central room, a kind of ‘house within a house’.” She also found it unsettling to encounter things left behind by the first inhabitant after the Civil War, architect and designer Annabel Karim Kassar: “Everything was in luminous orange and apple green. A daring touch, but not mine certainly.” She nevertheless paid her dues to Annabel, for example by retaining the bright window frames in the dining rooms.

What Maria Hibri loves far more than the brash Pop colors are the pervasive tones of Central Asia. She’s had her grandmother’s sofa in the bedroom covered in rose Russian chintz, influenced no doubt also by Alain de Botton’s “Architecture of Happiness”. “I initially felt lost in the large rooms, as if I were swimming in them. Now, my grandma is here, and wearing pink at that. That gives a sense of backbone to the place. Yes, furniture really can make you feel happy. It’s like lipstick for a woman!” At the same time, she had to learn “to let go” in the new home: “I arrived here with my stuff and with my retinue. For a whole week we played through all the possible permutations. What definitely didn’t fit in here was simply jettisoned.” Nevertheless, the Muslim, and she’s married to a Christian and terms herself apolitical, is an ardent champion of the uncomplicated and easy coexistence of opposites: “At Bokja we’re forever talking of the ‘democratization of objects’. If you place two things you like next to each other, they somehow like each other, too.” Thus, in her house a pink-colored sculpture of the Madonna is just as much at home as is a dining table by a Dutch designer or a painting of Lenin from Uzbekistan. Everything fits seemingly seamlessly and effortlessly together to form an enjoyable and nonchalant neo-Lebanese interior.

Maria Hibri invited wit to take part, among others in the guise of a fish that flies through the reading room now instead of a ceiling light. It found its way here from Marais in Paris via Istanbul, where Maria’s husband works as a diplomat and where the family has its second home. In the garden, in a similarly egalitarian and non-confessional manner, highly different plants are all wildly mixed. Fully to Maria’s taste: “I really don’t like perfection. Which is why we at Bokja also call ourselves the chaos-makers.” In the winter and spring, she likes to sit on the balcony that looks out over this green haven. She loves her bathroom most of all. It has two large windows looking out over the inner courtyard and through which the sun comes flooding. “I’m always there with my kids when they come to visit.” Seething-teeming Beirut can be quite tranquil and lovable... Maria Hibri’s polyphonic interiors most certainly celebrate the lighthearted side to life.

You can watch the video behind
Maria Hibri’s vintage palace on www.ad-magazin.de 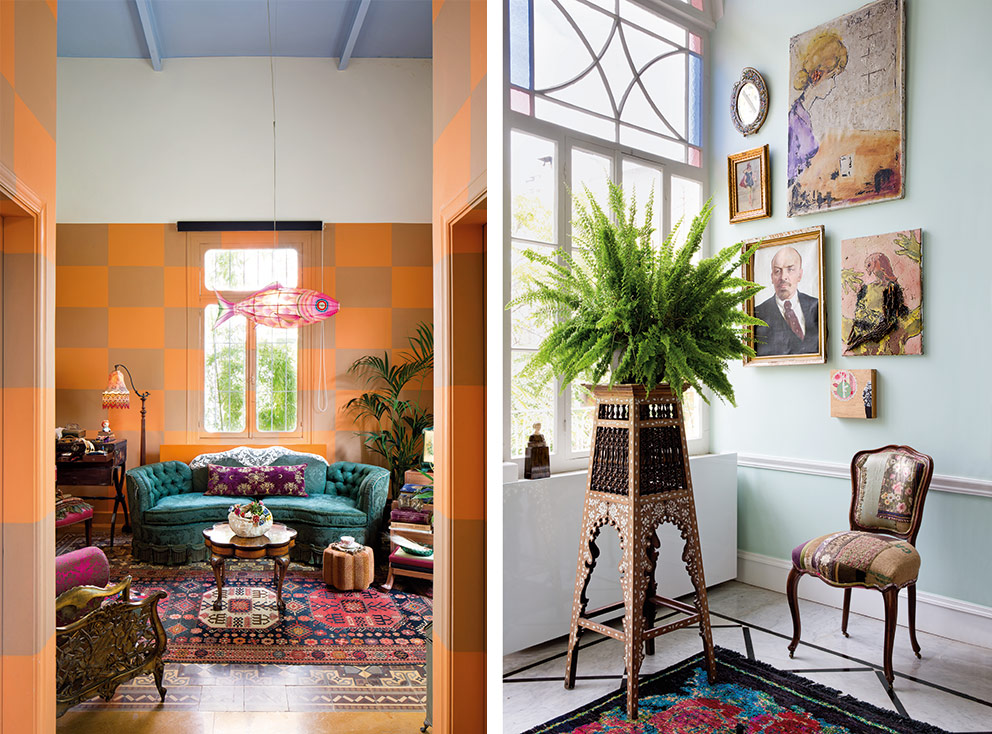 On the sofa of a New York flea market is a cushion, that Hibri has designed for her own label Bokja. Photo © Filippo Bamberghi 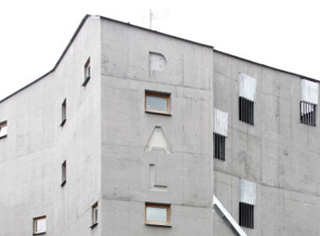 Gray magnificent for the Emerald Isle: The UNESCO City of film – Galway – has a new cinema palace. 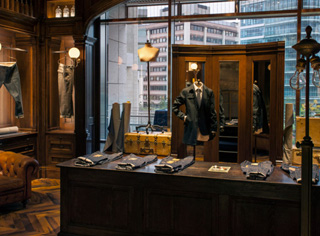 Multi-Sensory Experience: In the new Replay flagship store in Milan is Denim only one of many reasons for an extended stay. 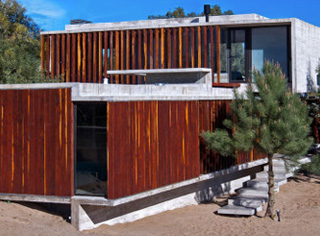 Luciano Kruks built the Casa MR in the dunes of Buenos Aires – a real balancing act.