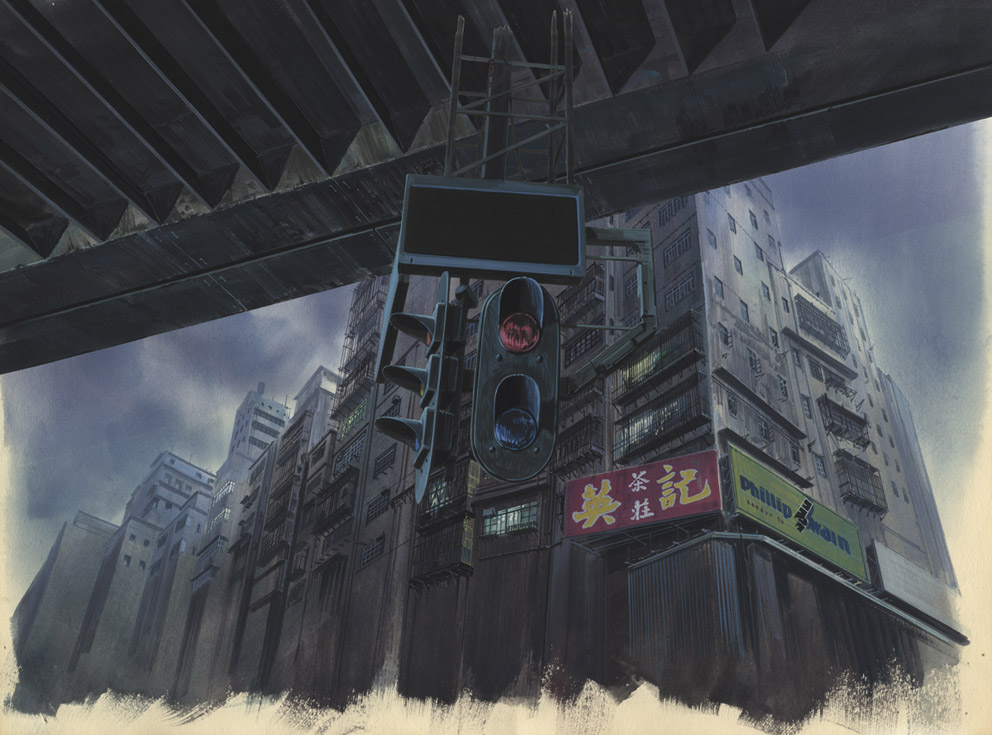 View from below, somehow threatening: one of the scenes for “Ghost in the Shell” (1995), drawn by Hiromasa Ogura.
Photo © Shirow Masamune / Kodanasha Bandai Visual Manga Entertainment

The exhibition is astonishingly silent. Astonishingly because in general one associates an exhibition on Japanese anime films more with noise: large, watery eyes under threat from gigantic machines, futuristic weapons that trigger awful detonations and the entire world of images is constantly being shaken up and bounced about. There’s none of that here. In the two exalted, windowless rooms of Sergei Tchoban’s “Museum for Architectural Drawings” in Berlin silence prevails, and not just in visual terms.

The exhibition concentrates mainly on three films: “Patlabor: The Movie” (1989), “Ghost in the Shell” (1995), a somber piece inspired by the “Blade Runner” that swiftly came to international fame, and the sequel, “Ghost in the Shell 2: Innocence” (2004). The exhibition eschews any mention of the plot, and there are no images of the protagonists either. Meaning viewers who do not know the films will not get to know them, or will learn about them in a very different way.

Thus the first room provides a brief introduction to the “anime” but then presents not detailed elaborations but a few backgrounds to scenes that are incredibly tranquil, here and there almost picturesque, drawn by hand with water colors subsequently applied. In the second room sketches and drawn studies are on show as are overview maps of the fictitious cities and places. It swiftly becomes clear with what precision these futurist cities have to be construed in each instance. For the representations to avoid contradicting one another by mistake, the most important buildings and streets had to be constructed down to the details and the camera pans and angles fixed carefully: Continuity means: Where does that happen? What does the building look like from the side? What buildings can be seen in the background and what did they look like in other scenes?

Above all in this second room the exhibition effortlessly succeeds with relatively few images in familiarizing us with the immense range of the design work and outlines just how much time went into preparing and precisely imagining such a vision. Small wonder that all three films are examples of “real-kei”, a special form of anime in which the emphasis is on as realistic as possible a depiction of cities of the future. 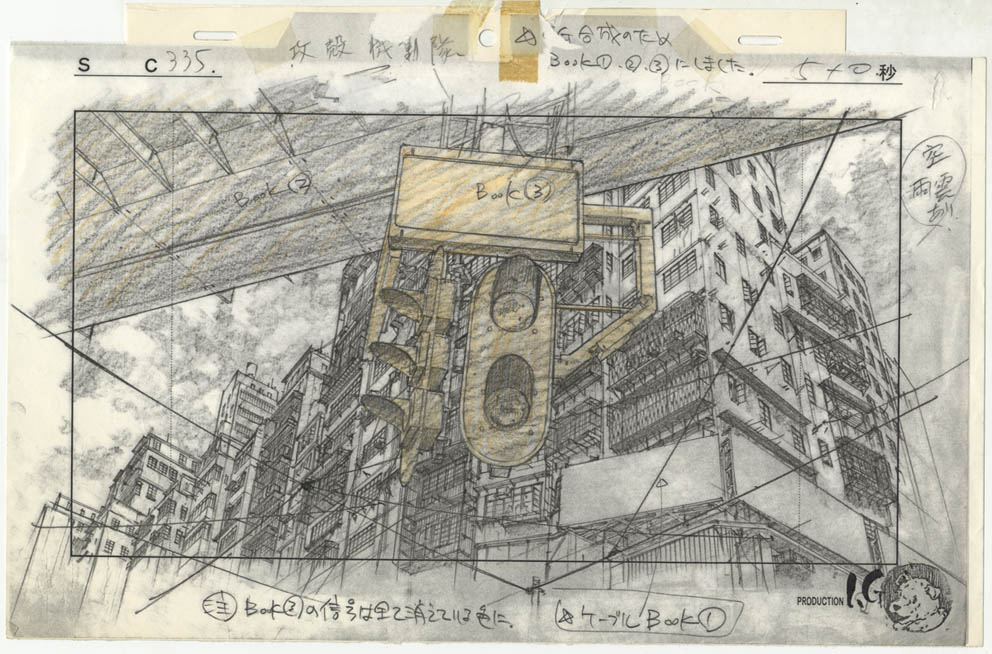 Layout for “Ghost in the Shell”: the lights are on a separate foil so that they can be changed on their own. Drawn by Atsushi Takeuchi.
Photo © Shirow Masamune / Kodanasha Bandai Visual Manga Entertainment Ltd.

The pictures consist of both specific, recognizable elements from existing cities that are multiply drawn over and given a denser mood by adding futuristic aspects, or are combined with other scenes in which entirely fictitious building blocks are integrated into the cities. In this way, in the background images you often see a mixture of a cityscape consisting of many, familiar and everyday elements and on the horizon the gleaming high-rises, huge infrastructure and strangely interwoven tube systems tower up. In such a scenery of the familiar and the imagined, objects such as the flying junks in “Ghost in the Shell” never seem completely out of place.

In all three films, the purpose-developed urban utopias play a special role. Often long pans present them in an almost meditative vein: The backdrops are a quite realistic Tokyo in “Patlabor”, a clearly futuristic and somberly revisited Hong Kong in “Ghost in the Shell”, and a Taipeh taken to a surreal-exotic extreme in “Ghost in the Shell 2” – including a massive version of the Milan Cathedral transformed into an Asian version. Given the huge production costs each and every minute of animated movie entails, these long, dreamy sequences with no action are especially astonishing. 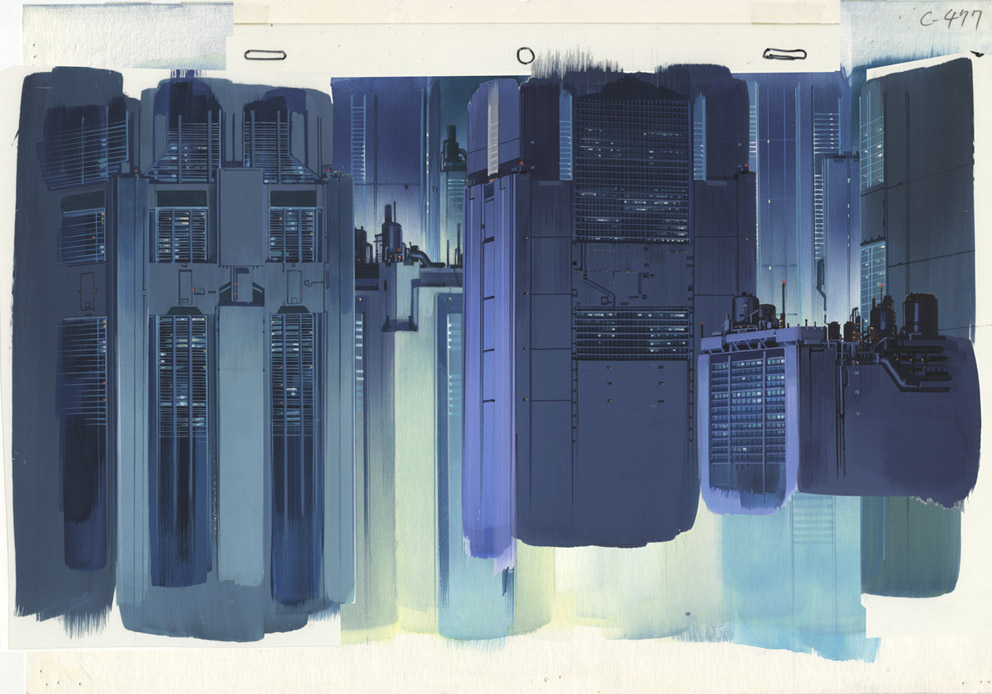 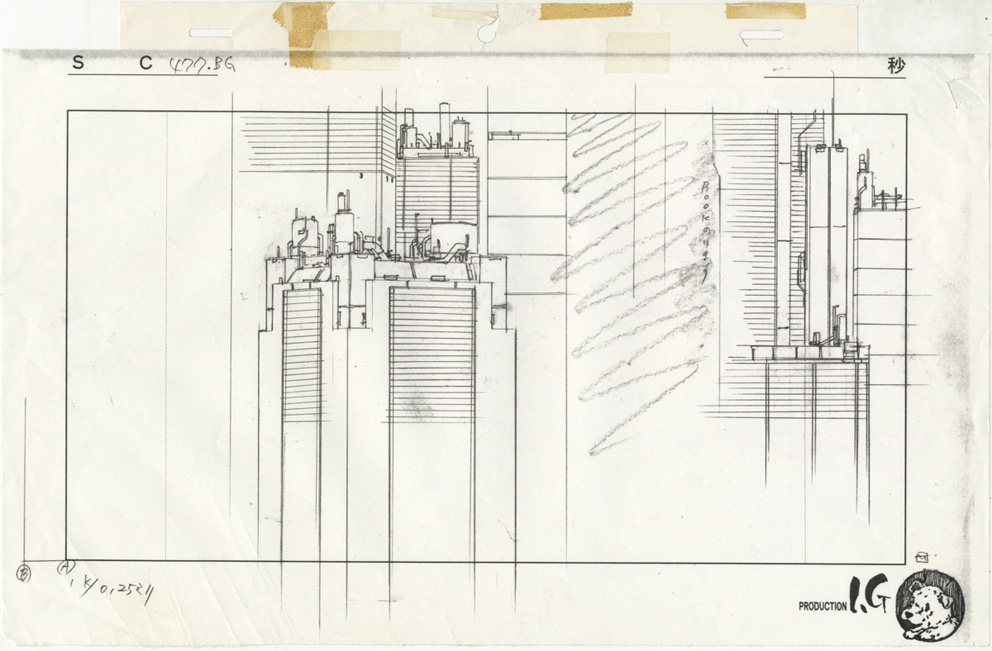 It is likewise astonishing just how small the original images actually are. There is hardly a sheet that is larger than a European A5 page – and yet you can easily lose yourself in the precise representations. This type of drawing is by no means considered as art in Japan, as Stefan Riekeles says in the accompanying exhibition catalog, but purely as craftsmanship. The illustrators work on shift in the large studios and assign all the rights to their work to their employer. Many of the drawings were destroyed after production and thus Riekeles has an entertaining story to go with just about every image, recounting the coincidences that led to precisely this or that scene surviving. Many of the illustrators are self-taught and never attended art college or a drawing class, instead being mathematicians or others from completely different disciplines who simply took up drawing animes because they so loved the subject and over time evidently became masters of the subject – and today have their own loyal following. They initially had little interest in an exhibition of their drawings, Riekeles recounts. In fact they expressed a certain lack of understanding for why the nice guy from Europe wanted to hang their “unfinished” background images on a wall. Wouldn’t that be embarrassing as the actual artwork is the finished movie, surely...

Given these stories you might be forgiven wishing the exhibition would look a little less polished and breathe a bit more of a workshop atmosphere. A few film takes and an outline of the individual working steps that turn the first sketch and storyboards into a film would have helped to explain the overall process. The way it is, there is no counterpart to the manically devoted side to producing an anime movie to be found in the strict hanging – of sheets that have been framed against their creators’ will. The silence that arises as a consequence ensures you have a completely uninterrupted view of the background to the films. And you can probably get them on loan from a good DVD club anyway. 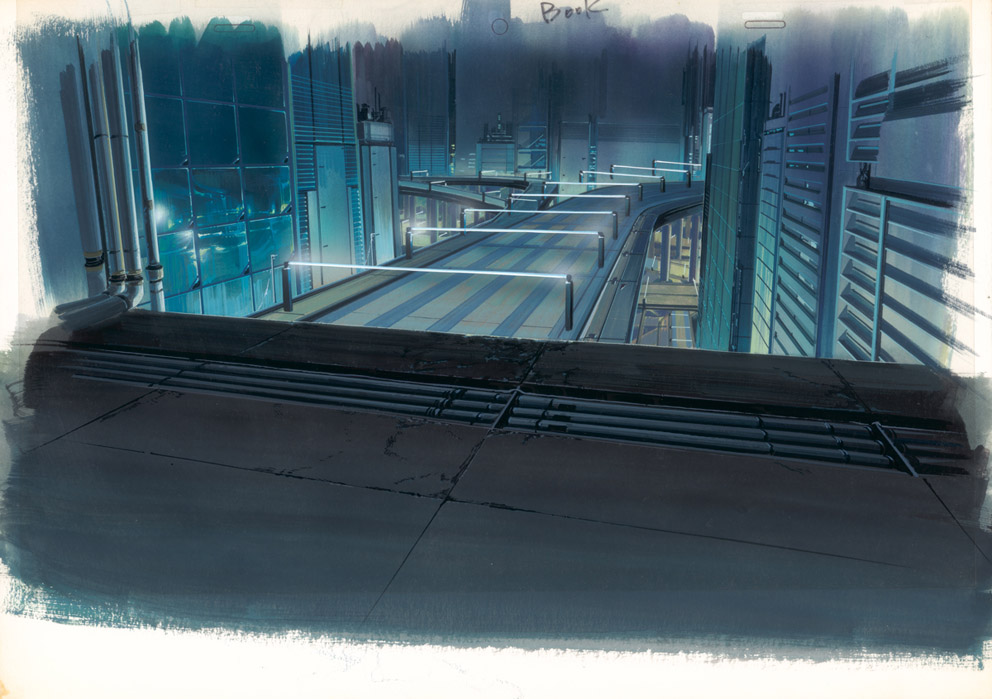 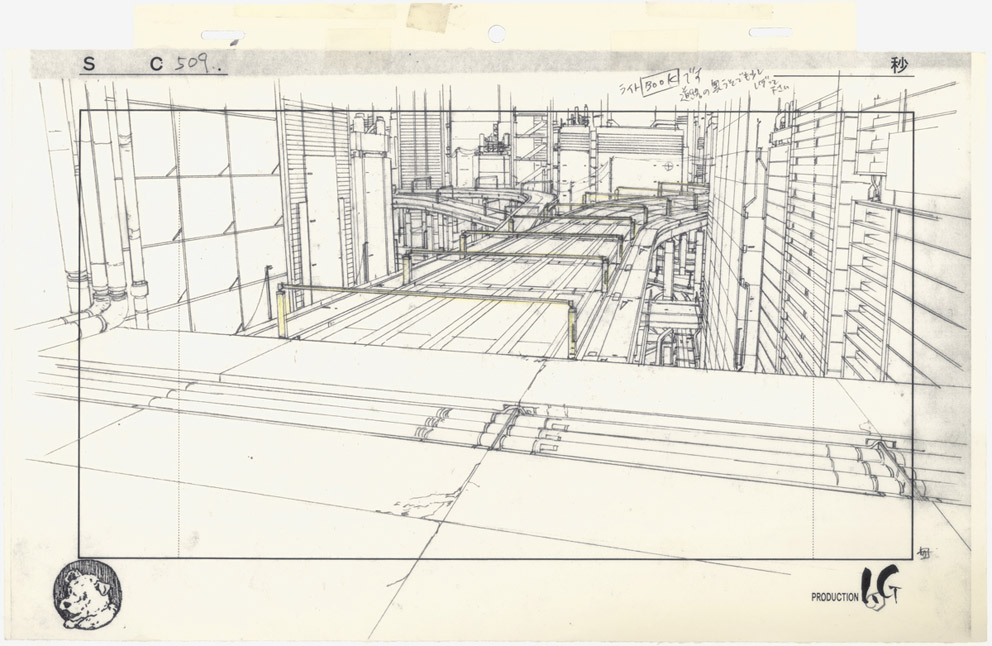 Each illustrator is specialized in particular parts of the production: For example, Takashi Watanabe is the concept and layout designer, among others for “Ghost in the Shell”.
Photo © Shirow Masamune / Kodanasha Bandai Visual Manga Entertainment Ltd. 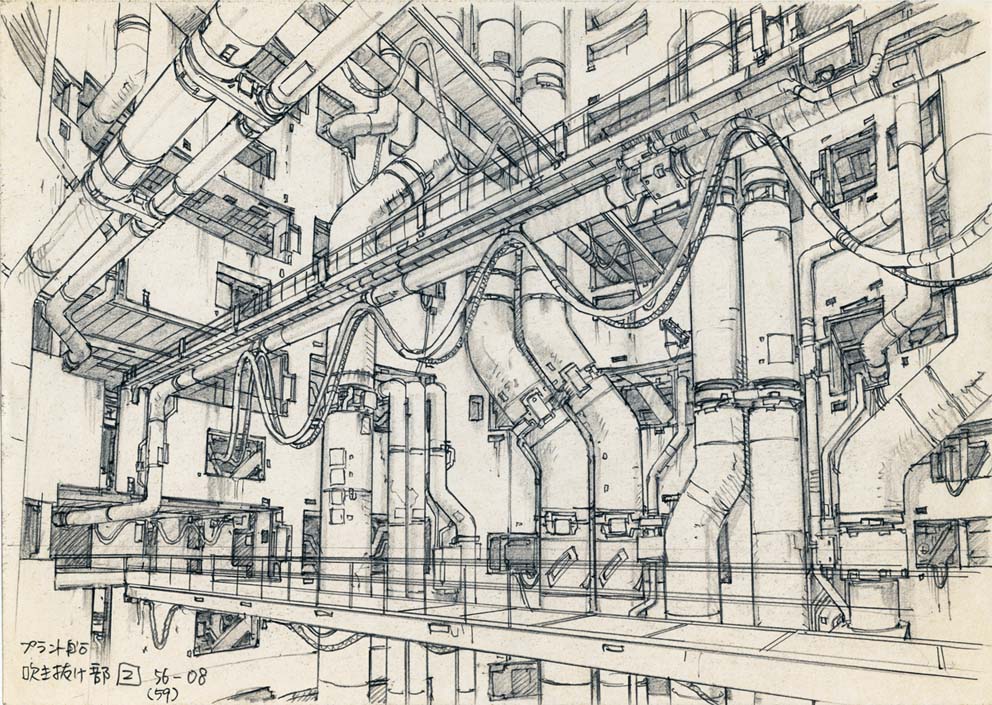 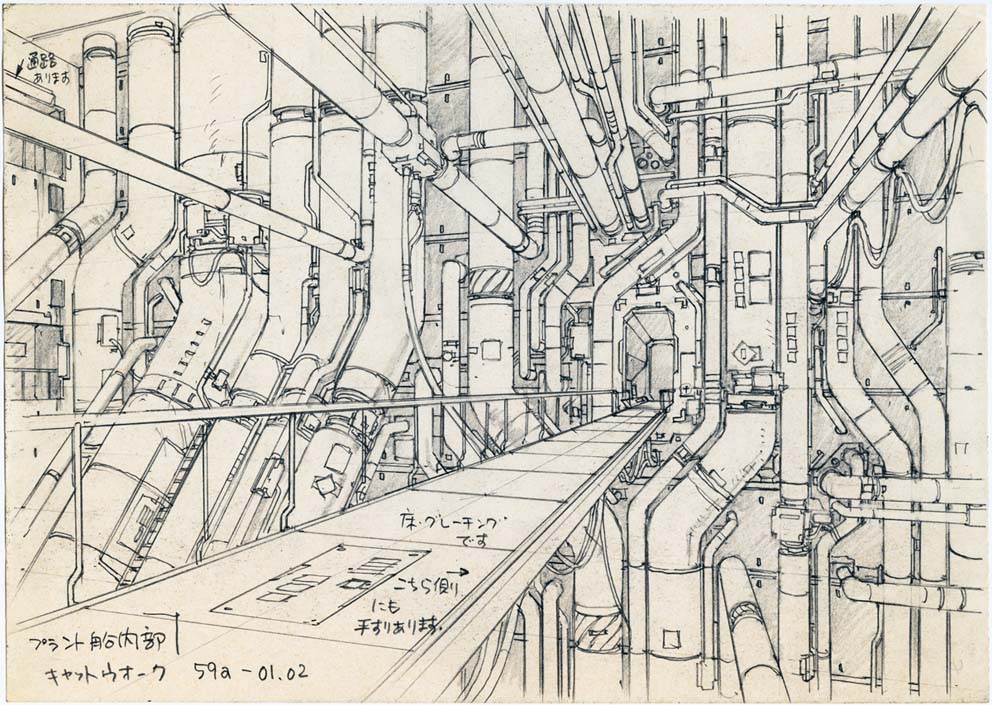 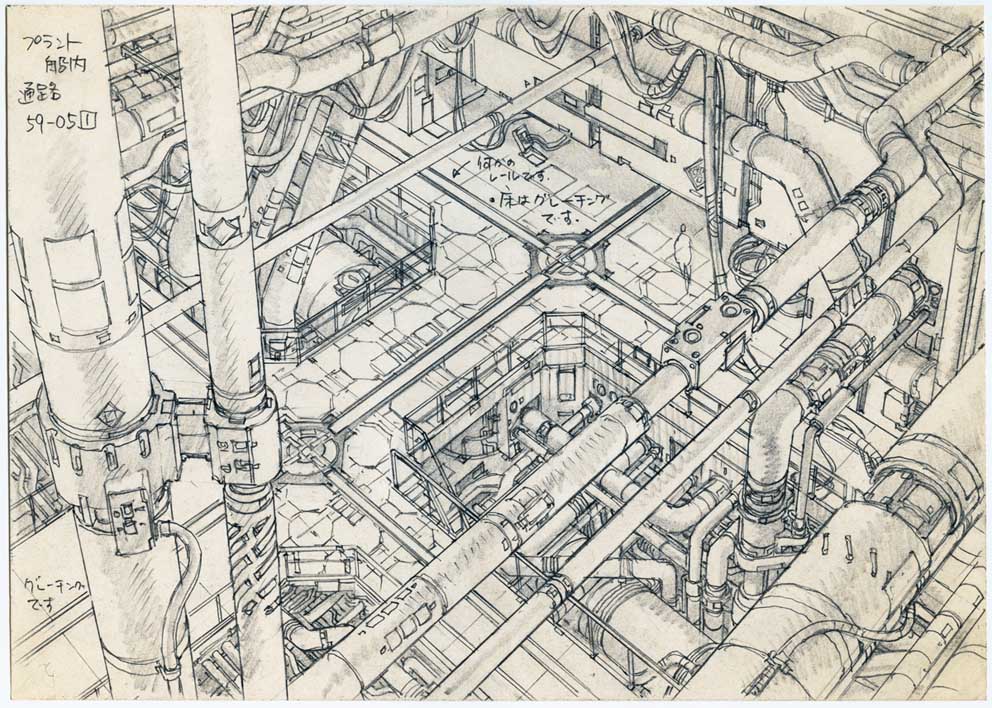 Watanabe’s love of snaking snares of cables and pipe systems is clear here, where they form almost the entire interior and are only interrupted by paths and platforms.
Photo © Shirow Masamune / Kodanasha IG, ITNDDTD 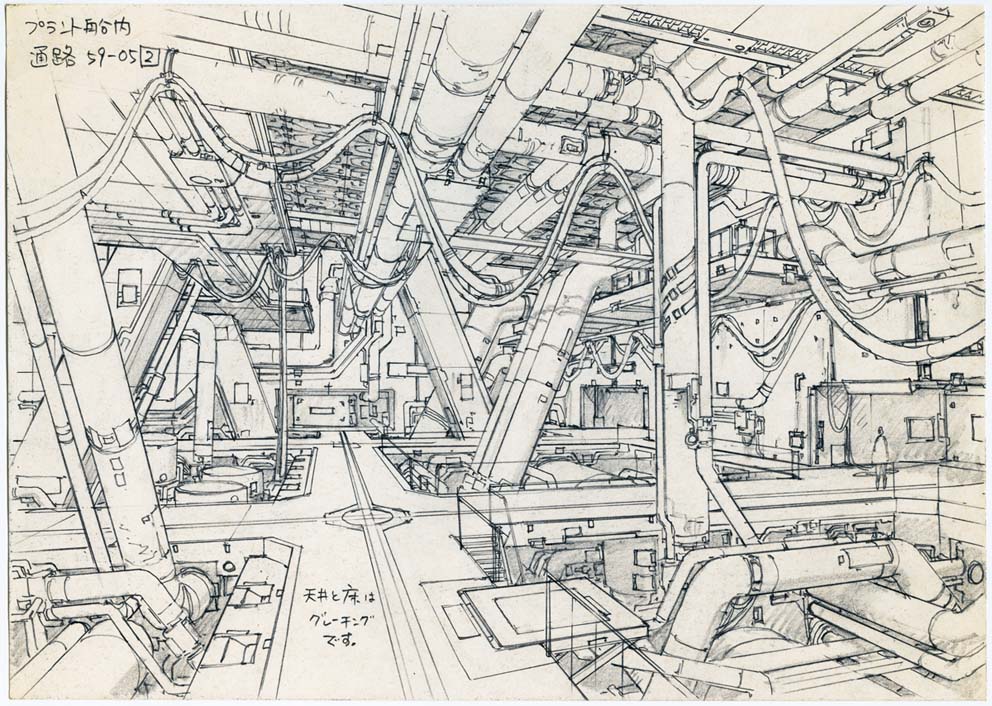