Military camouflage existed long before the advent of the stealth bomber - and it did so not only in the form of branches with leafs stuck to a helmet. Originally, the term "razzle-dazzle" quite generally referred to a kind of superficial flamboyance, a form of chaos and tumult. During World War One, visual razzle-dazzle effects were used on ships to deceive German U-boat captains. The Royal Navy, for example, commissioned artists to develop shimmering patterns based on cubism which, painted on a ship's hull, were supposed to make it more difficult for the captain of a hostile U-boat to accurately determine the ship's position, course and speed. After all, if said captain wanted to fire a torpedo at the moving ship, it was necessary for him to calculate where the ship would be when the missile reached it; he had to fire at a target calculated in advance. If the torpedo struck too early or late, it would miss the ship.

Hence the camouflage's purpose was not to make the ship invisible but to impede the observer in accurately determining its position and speed. As contemporary photographs of such ships show, it was indeed hard to make out the direction in which a bow painted in this manner pointed. The English called this camouflage technique "dazzle painting", the Americans "razzle dazzle". In recent times it has come into vogue again in the automotive industry where it is adopted to disguise prototypes. Today, however, extensive abstract floral patterns in black and white are used to make it more difficult for the curious observer to recognize the car's exact form.

Tobias Rehberger employs artistic camouflage patterns, created in virtuoso manner, in his Italian bar at the former Padiglione Italia, which is now called "La Biennale" and will in the future also host exhibitions in the periods between biennials. Rehberger won a Golden Lion for best artist for the fully operative environment called "The things you love will also make you cry" which he realized in collaboration with the Finnish manufacturer Artek. It has now become a permanent feature at the pavilion.

With black and white stripes, mirrors and all kinds of psychedelic patterns that completely cover the floor, walls, utility shafts and furnishings, he disturbs the observer's perception to such an extent that the latter feels deprived of all stable orientation. Anyone who spends time here is virtually dazzled by all these resplendent patterns, a game with illusions that cannot be put together synthetically to create one single perception but keep on breaking up into individual pieces. You entered as a common hungry or thirsty person and now you feel drunk on top of everything else, and aside from this you hunger and thirst for calmness and contained order. However, it is not you but the space surrounding you that is drunk; everything you were familiar with seems shattered, the brain's synapses overloaded. "Lighter than a cork, I danced on the waves" reads Arthur Rimbaud's poem "Le Bateau ivre". And that is exactly how you will feel if you spend too much time in Rehberger's cafeteria.

Ever since his exhibition "the chicken-and-egg-no-problem wall-painting" at the Stedelijk Museum in Amsterdam, where he realized a somewhat different wall painting (using projections, the shadows cast by his own works and painted surfaces) everyone who has followed Tobias Rehberger's work has quickly realized how much he enjoys confounding people's senses and reasoning. What belongs to which category? Is a design classic drawn from memory and reproduced in Africa on the basis of that sketch still a design classic? Is it a replica? Or has design turned into art here? Is it a pattern or a wall? Where does the table end and the wall start? When you put your mind to fathoming Rehberger's art, you will find not just your senses start to swim.

Rehberger teaches at the Städel Art Academy in Frankfurt and in 2008, together with Claus Richter, he built a veritable small city that alternated between Disneyland and a favela: for "The Design Annual - inside: Showtime" design fair curated by Stylepark. Time and again he has deliberately set out to upset what appear to be fixed points of reference. What is supposed to be stable starts drifting away, what you believed to be real just a moment ago proves to be a mere appearance. Reliable limitations and rules are replaced by pure sensation of sensory data that group together but cannot be united to form a coherent picture of the world. In Rehberger's view, art does not only exist to be beholden. It surrounds you, encloses you and you experience it first hand. Mainly as a disturbance. Razzle dazzle on the edge of the lagoon. 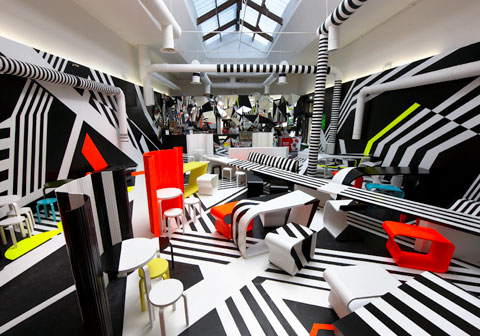 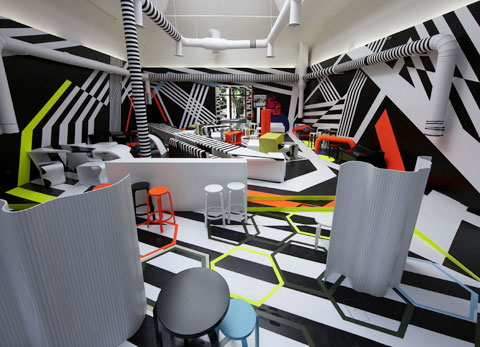 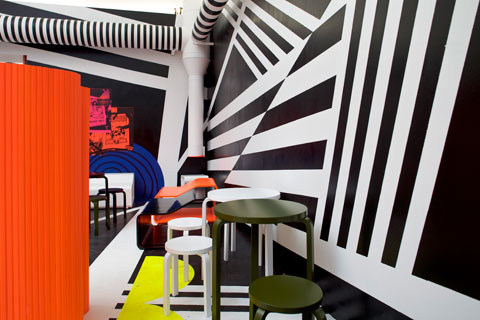 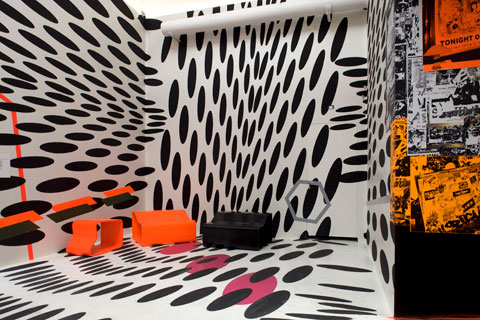 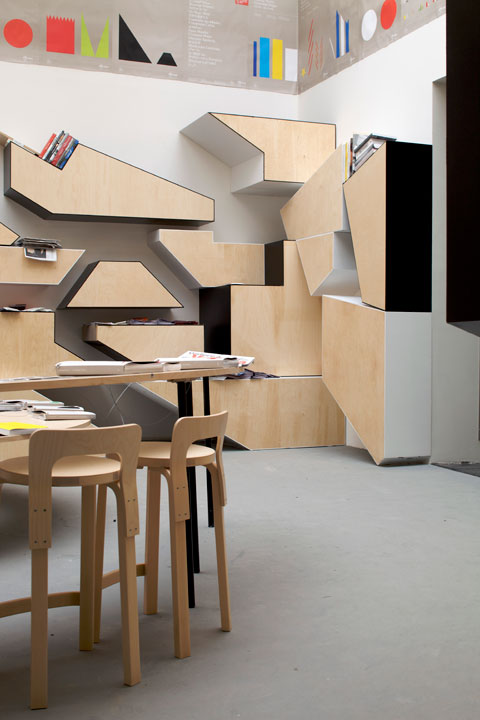 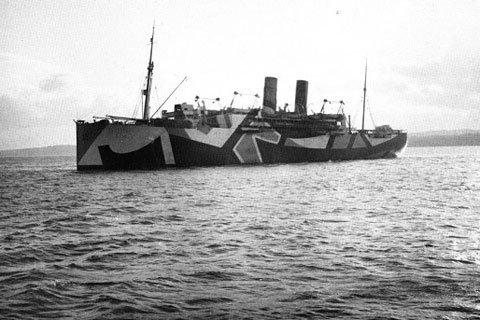 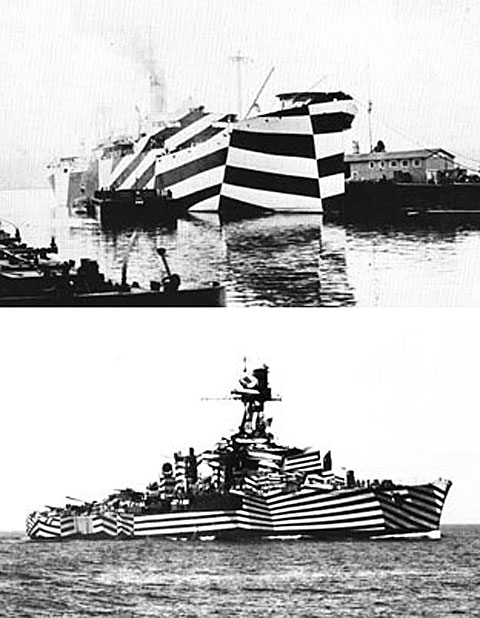 the USS Mahomet and the French cruiser Gloire 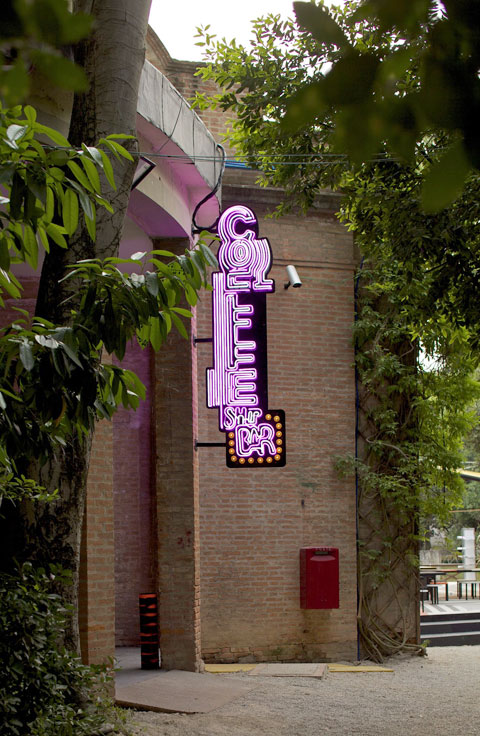 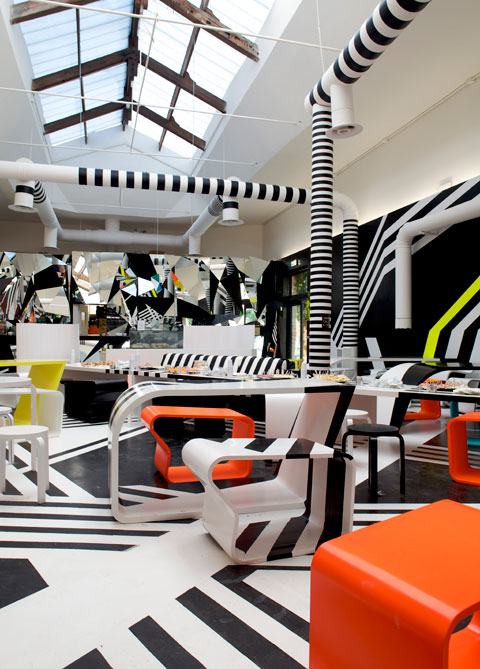 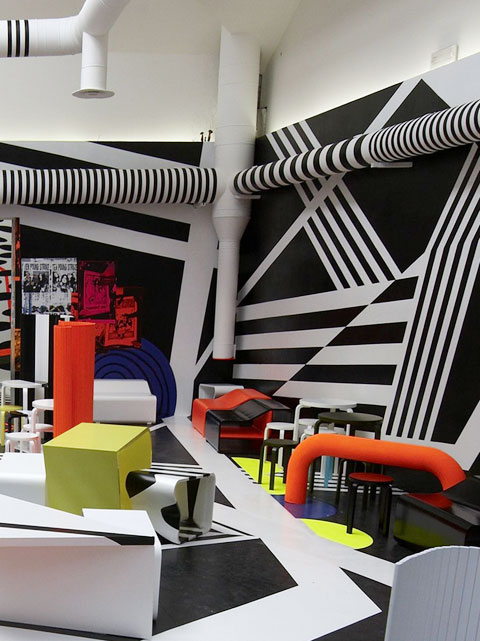 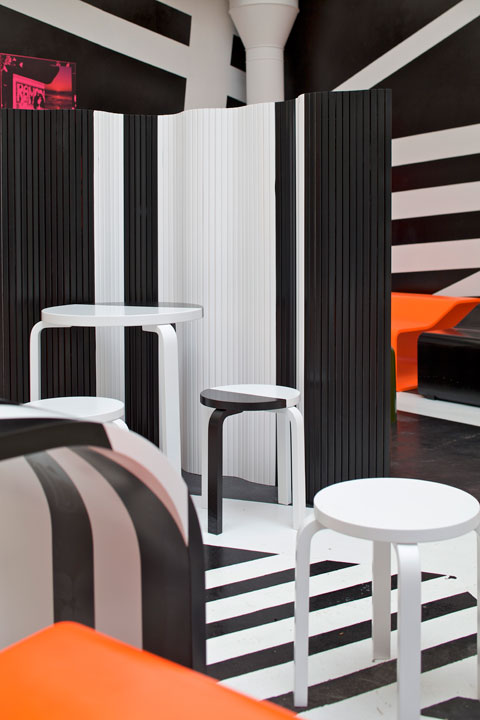 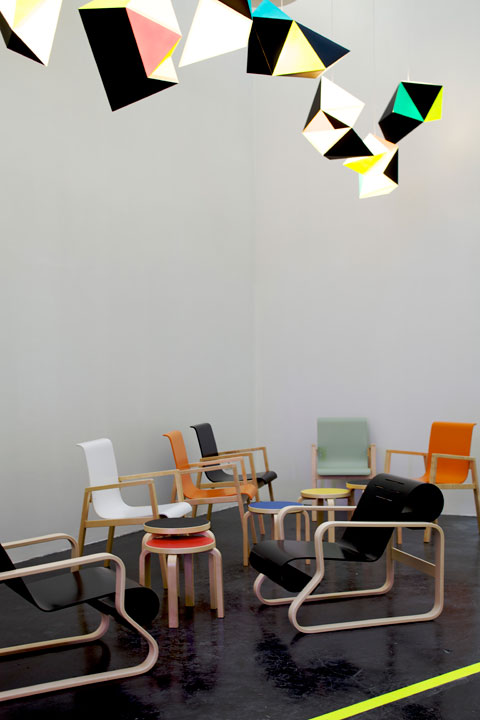 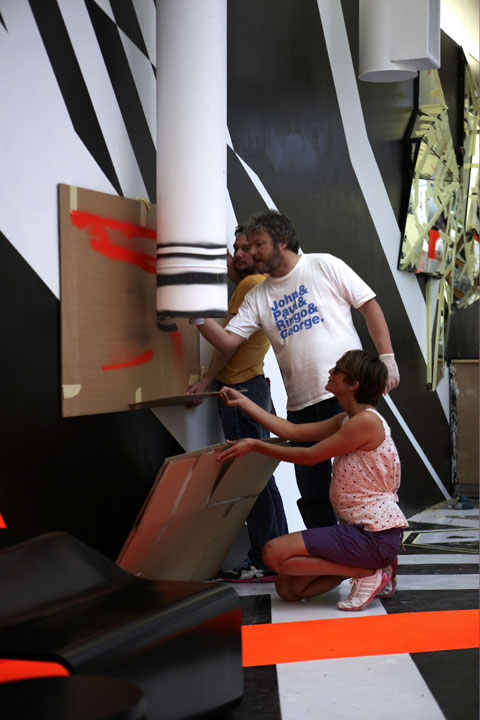 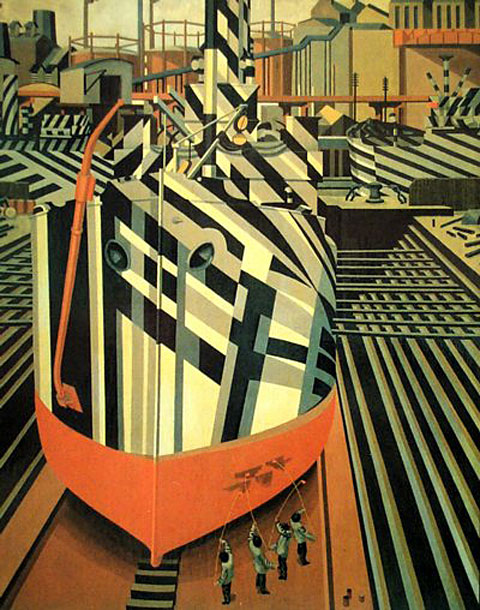 Dazzle-ships in Drydock at Liverpool (1919 ) by Edward Wadsworth 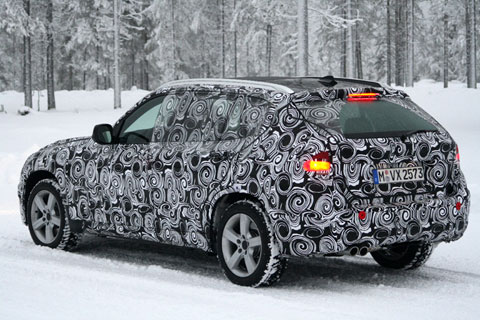