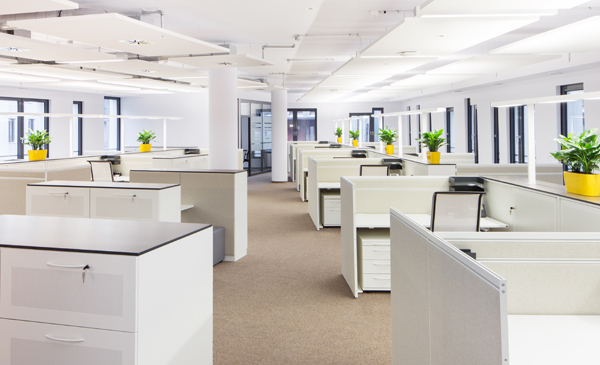 The storage cabinets were made to a special design by ACTA.PLUS. Photo: © BP

This summer, BP moved their headquarters to the Sumatrakontor complex in Hamburg’s HafenCity district. The Dutch architectural firm Erick van Egeraat is the brain behind this spectacular, colorful building, which forms part of the so-called “Überseequartier” that will soon be at the heart of the newly developed HafenCity. However, BP’s move to its new headquarters spanning three floors and 4,000 square meters required a long period of planning and preparation. After all, the brief did not only consist of finding new premises, but involved a restructuring of the office organization. To this end, König + Neurath’s NET.WORK.PLACE concept provided the basis for an interior design that would facilitate both flexibility and communication. Areas known as central zones were introduced between the more traditionally conceived IT and work stations, with innovative seating arrangements that were previously unthinkable in an office environment. Showing that communication, be it formal or informal, has now been recognized as a decisive part of the company’s philosophy.

The project kicked off with the appointment of an expert for space and relocation management, interior design and office conception. Following which the Hamburg-based company vonhaveprojekt GmbH was commissioned to find a property and to develop a suitable concept. For this, both the company’s specifications and the wishes of the staff needed to be considered carefully. The aim was to provide an effective use of the office space and workstations with an appealing look-and-feel. For the implementation of the integrated, flexible room concept a company had to be found that would provide a superior interior design. The choice fell on König + Neurath as full service providers with a good cost quality ratio.

In the new flexible office, 270 work spaces have been separated into four different zones, with each ‘territory’ serving one of four individual purposes: communication, work, retreat, and concentration. Each station in the airy and welcoming working environment is equipped with KINETA swivel chairs with automatic weight sensors and height adjustable TALO.S desks. These provide a healthy work environment that ensures a sense of wellbeing for employees as they sit down to work. In addition, the “work” zone contains sofas from the NET.WORK.PLACE series, which allow staff to briefly exchange words between tasks. In the Sumatrakontor building, conference and retreat areas are located in small separate rooms, offering quiet and undisturbed work areas as well as an opportunity for private meetings and conversations. Lounges and meeting points characterize the communication ‘territory’, likewise furnished with seating from the König + Neurath collection. The NET.WORK.PLACE central space concept includes lounge furniture that is unusual in an office environment and facilitates informal discussions in distinctive square areas. Providing bright splashes of color, the furniture can be moved around as required. This modular system means that the areas can easily adapt to fulfill varying functions.

In response to a special request from BP, the planned double stations in the work place have been tailor-made to feature interior storage space on both sides. The storage cabinets are fitted with special acoustic fronts and side partitions to reduce the sound level. For the lighting concept the luminaires were integrated in the storage elements to prevent hazardous tripping. It is thanks to their extensive and detailed preplanning that König + Neurath have succeeded in realizing a concept that at first glance looks to be a contradiction in terms but has worked out extremely well: “customized mass production”.

The storage cabinets were made to a special design by ACTA.PLUS. Photo: © BP 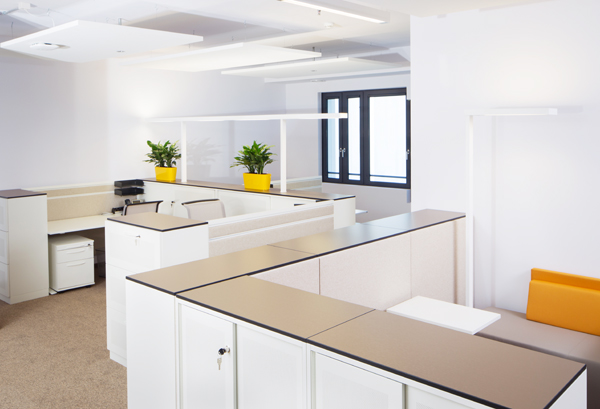 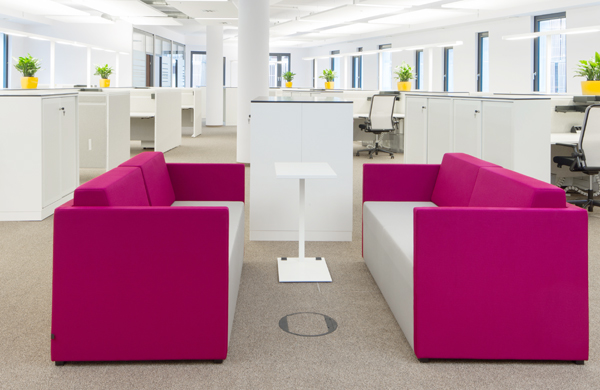 The sofas are not what we might expect to come from a company which specializes in office furniture, but communication is a decisive part of the work process: NET.WORK.PLACE from König + Neurath. Photo: © BP 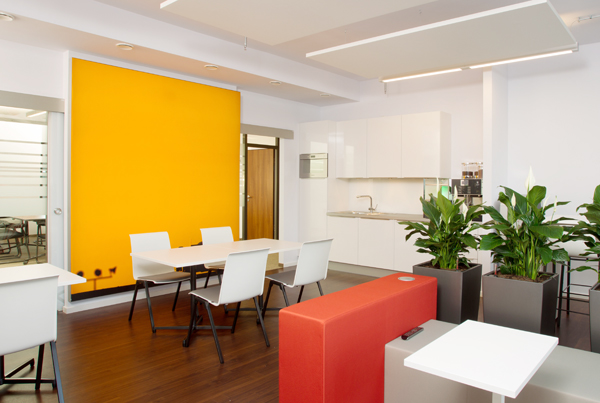 The lounges are the best place for informal conversation. Photo: © BP 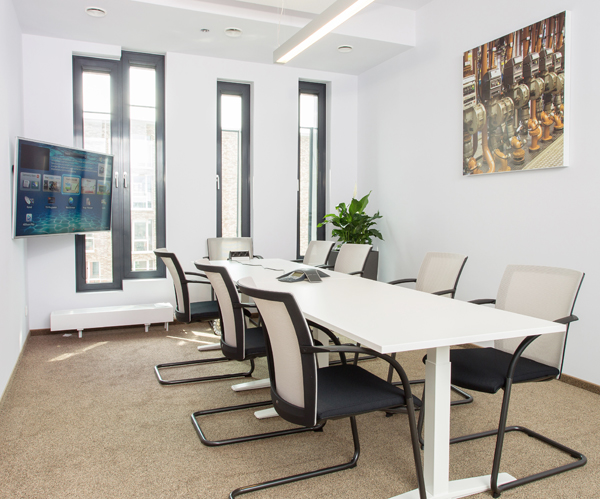 One of the eleven meeting rooms with OKAY.II swivelchairs and a height-adjustable table system from TALO.S, sourced by König + Neurath. Photo: © BP 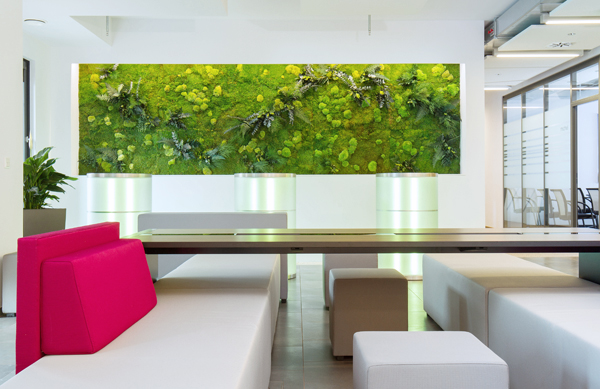 Of the four ‘territories’ in the new BP headquarters, Communication is by far the most attractive. Photo: © BP 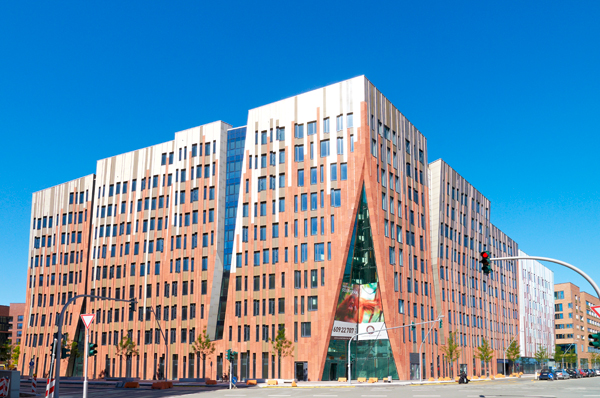 The Sumatrakontor building, designed by Erick van Egeraat, has been home to the BP headquarters in Hamburg since summer this year. Photo: © BP 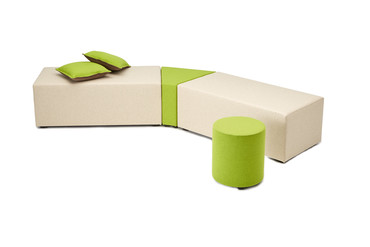 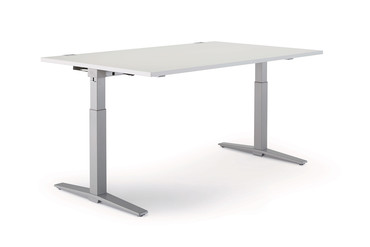 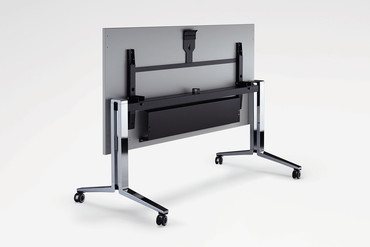 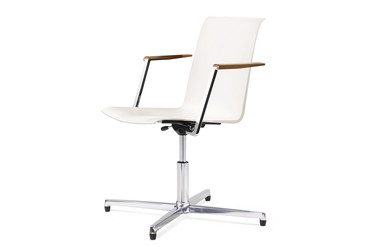 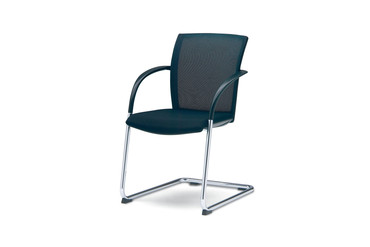 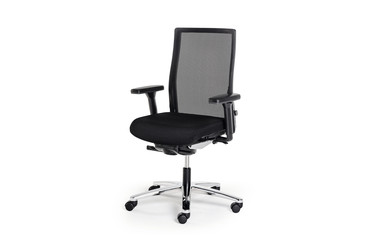 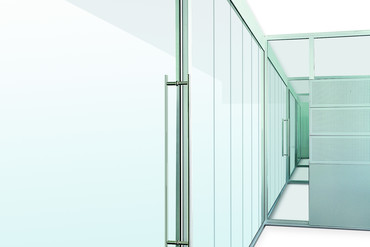