Change-around time in the palace of books

Since the early 18th century, France’s most important library has resided at the Rue de Richelieu in Paris’ second arrondissement. For years now, the complex, which is of such art historical significance, has been being modernized. Now the first section has re-opened after modernization.
by Fabian Peters | 2/6/2017

In 1988, the French government resolved that constant small steps were simply enough and went for big time: They tendered for a new building for the French National Library. In 1996, the long-standing institution moved after over 250 years from Rue de Richelieu in the heart of Paris to Tolbiac to the more down-at-heel east of the city. Dominique Perrault’s spectacular but controversial building with the four storage towers and underground reading rooms is today named after the man who initiated it: François Mitterand.

It was the second time in the history of the institution that given ever larger holdings the only way out was a major construction project. The first time was in the mid-19th century, when the authorities resolved to move the library, at the time a conglomerate of two former aristocratic town palaces and various annexes, needed to have contemporary reading and storage rooms. The nod went to Henri Labrouste, an architect who a little earlier had designed the Bibliothèque Sainte-Geneviève, possibly the world’s first modern library building, with substantial parts made of cast iron. Labrouste had more than half of the old buildings torn down and created a massive storeroom and a reading room, which with its nine domes on refined iron struts no doubt makes it one of the most beautiful library rooms per se.

After the move to the new build in 1996 the National Library continued to use the old building at Rue de Richelieu for exhibitions and to showcase some of its most important special historical collections, such as ancient manuscripts and coins. However, conditions in terms of conservation and the technical equipment had become so dire that a general overhaul was imperative.

In 2007, Bruno Gaudin Architectes therefore started planning the comprehensive modernization also intended to enable contemporary use of the place. This called above all for efficient routing between the various buildings. However, the relevant conversion work was very complex as the listed parts of the complex, so important in terms of art history, could not be radically altered.

After intense research on the structure, the architects devised a whole raft of measures to redesign the complex. They designed a central longitudinal foyer as the main access to the library. This provided entry on the two opposite sides of the block. A central stairwell also serves to ensure vertical access. The architects also shifted the line dividing the public from the non-public areas: Large sections of the storerooms are now open to users. At the same time, countless new workstations were created here for library visitors. Now, we can all admire the graceful cast-iron architecture that Henri Labrouste developed to store the holdings of the Bibliothèque Nationale. It has been completely restored and re-outfitted for the new uses.

The architects attached great importance to preserving the historical fit-out and restoring it properly. Where intervention was necessary or rooms needed reconfiguring, they mainly came up with restrained and neutral interiors. The new reading room for the Département des Arts du Spectacle boasts vertical wooden louvers, for example, at the book check-out desk, the tables and the wavy line of the wall screen on the upper section. For the west entrance to the large foyer Bruno Gaudin & Virginie Brégal Architectes abandoned all restraint however. Here, at the entrance to Labrouste’s reading room, they opted for majestic candelabras that hang from the ceiling.

In December 2016 the first modernization phase including the storerooms and the Henri Labrouste reading room was completed and opened to the public. At the same time, new library holdings are now stored here: those of the Institut national d’histoire de l’art and the École nationale des chartes. Modernization of the entire complex is due for completion in 2020. Then, the oldest sections of the buildings will, almost 300 years later, house the Bibliothèque Nationale. Who knows whether Perrault’s new build will ever be able to look back on such a produ history? 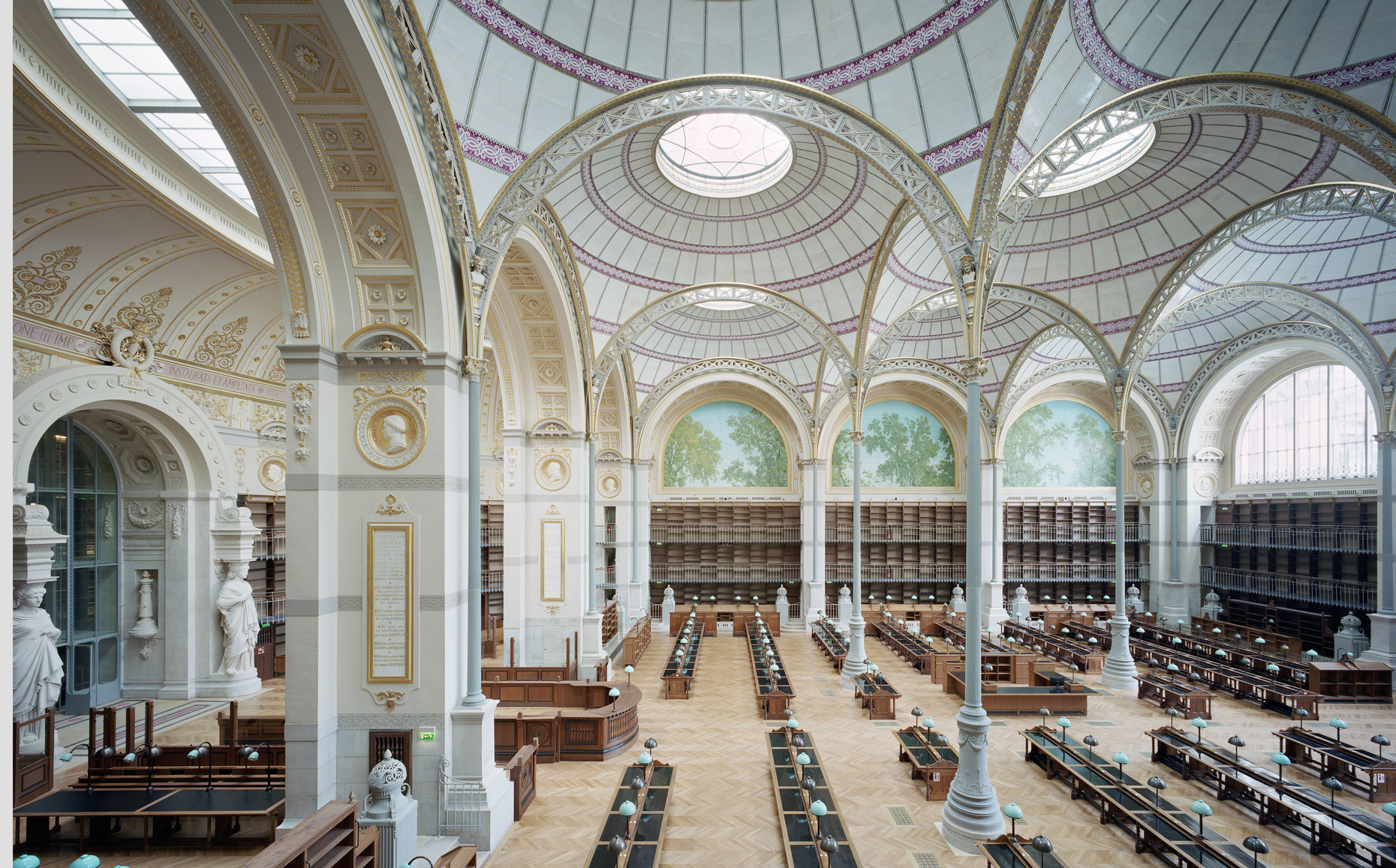 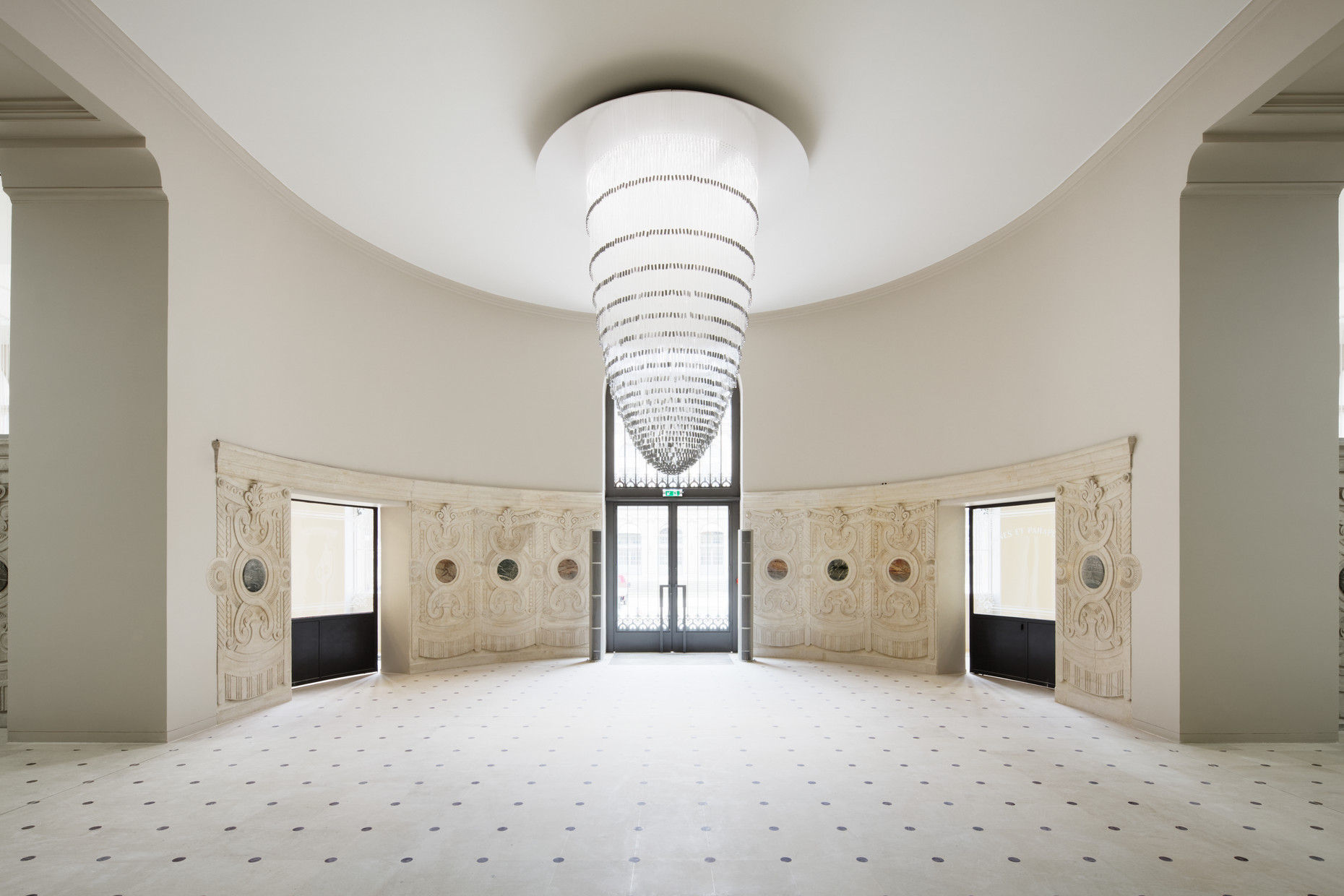 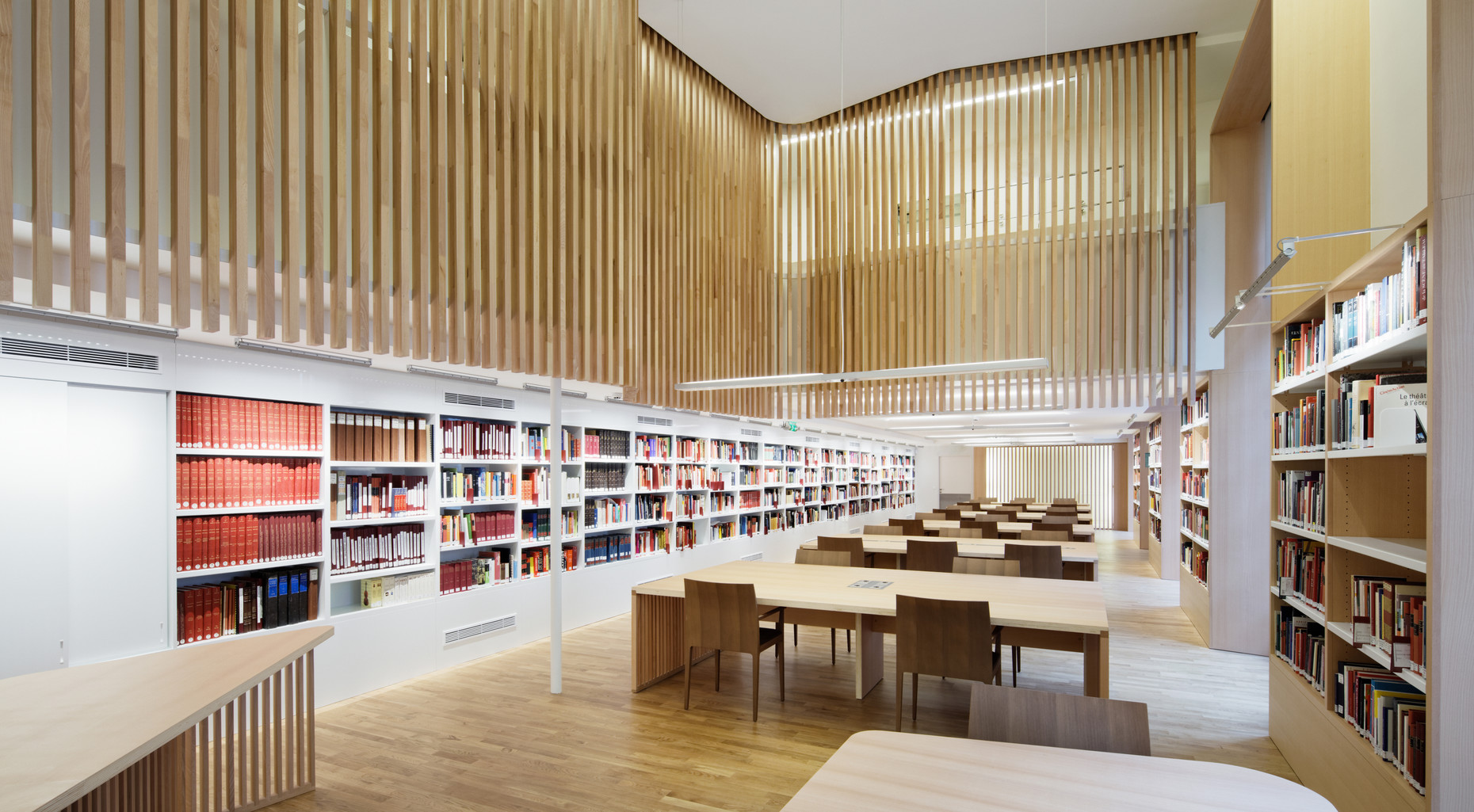 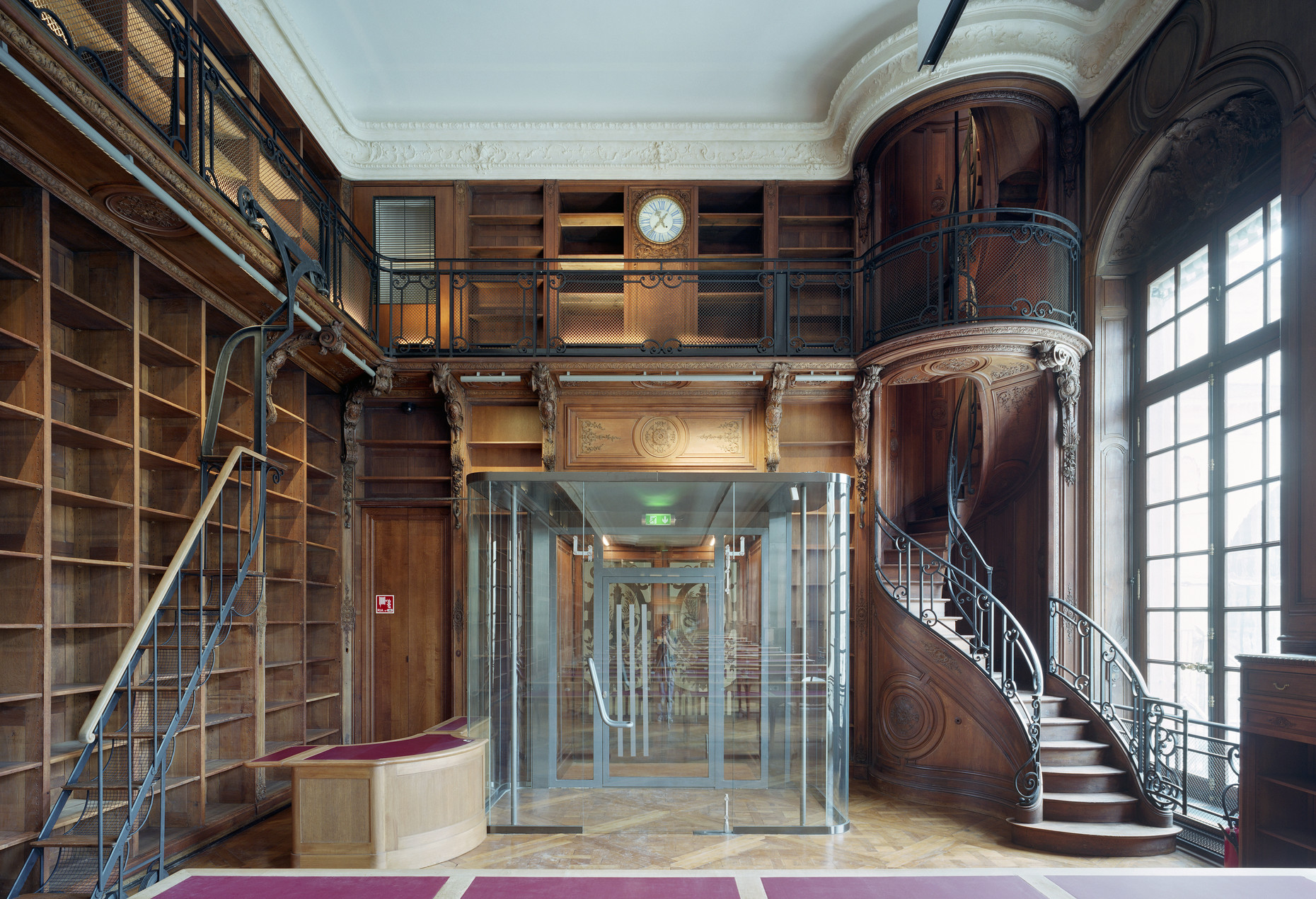