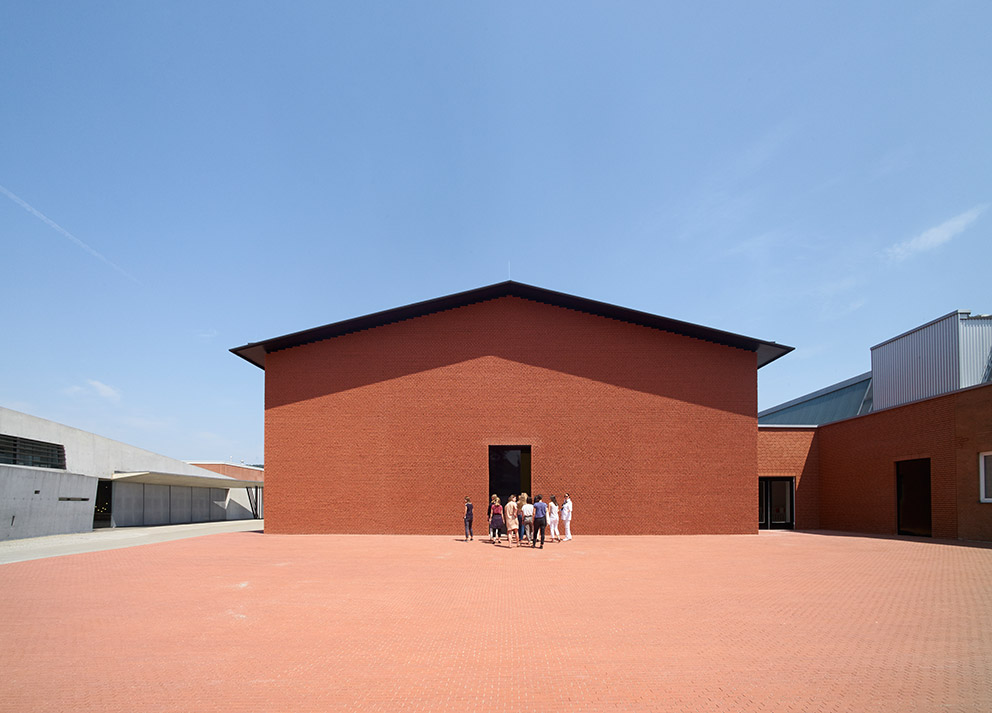 Collectors know the deal. There is never enough space to store, spread out and present all the things they have collected down through the years. What is on display is always just the tip of the iceberg. When the Vitra Design Museum in Weil am Rhein opened with a show on “Meisterstücke” (Masterpieces) back in 1989, it still primarily focused on collecting and presenting chairs. In the middle of the airily arranged exhibition, which simultaneously highlighted the then sensationally new architecture of the museum building by Frank Gehry, there was, among other things, something like a large letter case with multiple rows in which some 40 selected chairs and armchairs up across several levels briefly illustrated the evolution of European and American seating furniture. In 2002 Die Neue Sammlung in Munich advanced this presentation concept, creating a monumental two-story shelf-based presentation of contrasting objects from one-offs to mass products, from prototypes to tools to series items. Florian Hufnagl, then director of the state-run museum, felt this condensed showcase of design history would enable him to illustrate nothing less than the “humanization of society by design”.

In the beginning there were two collections

The expectations in Weil am Rhein may be more modest. But then again maybe not. Initially the Vitra Design Museum collection encompassed around 1,000 objects, fed by two main sources: furniture collected by then Vitra CEO Rolf Fehlbaum since the early 1980s, and furniture that Alexander von Vegesack, the museum’s founding director and appointed by Fehlbaum, had started collecting some 20 years earlier. The two strands complemented each other well, for whereas Fehlbaum concentrated on important designs by Charles & Ray Eames and George Nelson (all key pillars of his company’s furniture production) while also acquiring furniture by architects and designers of the 1920s avant-garde such as Alvar Aalto, Jean Prouvé and Gerrit Rietveld, Vegesack’s collection focused on Thonet and bentwood furniture including predecessors and offshoots, not to mention tubular steel furniture of the 1920s. 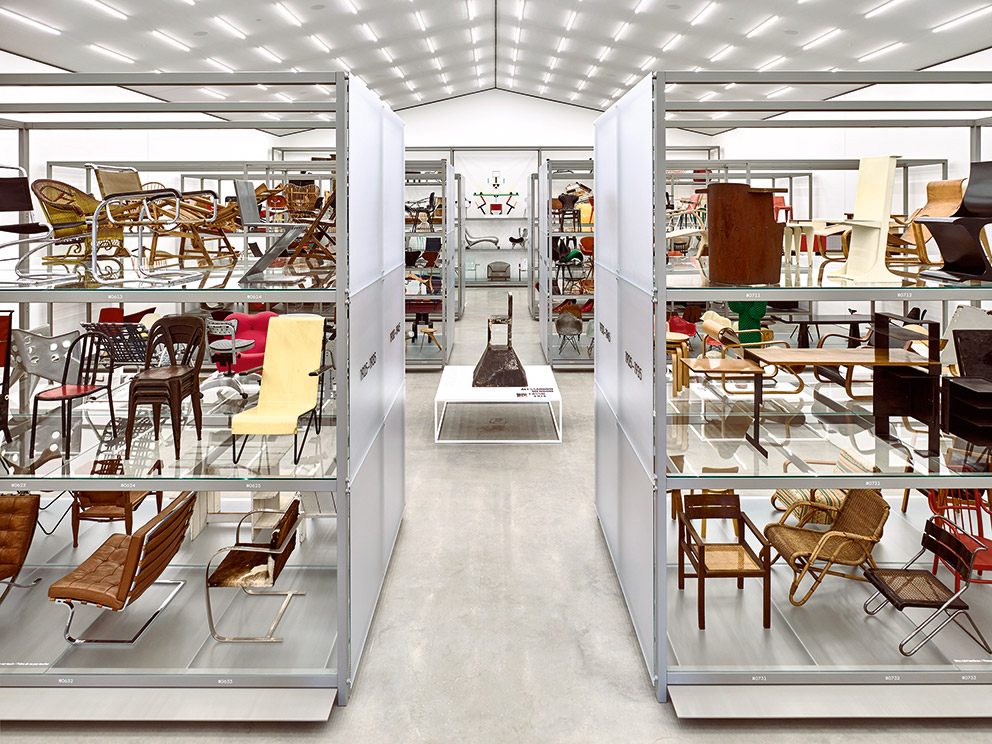 Almost 30 years after the Vitra Design Museum was founded, the collection’s warehouses contain some 7,000 items of furniture, 1,000 luminaires and around 20,000 objects, in total 100,000 archived items of all kinds, including a library and the estates of Charles and Ray Eames, Verner Panton and Alexander Girard. The museum soon started conceiving thematic and monographic exhibitions, which go on tour after their initial presentation at the museum and are then to be seen in key design and architecture museums the world over. Mateo Kries and Marc Zehntner, directors of the museum since 2011, have expanded the institute’s design perspective to include art, architecture and social contexts. The collection, and thus the source material for all research and project work, increasingly got left in the background, or quite literally underground.
The halls and their basements on the western edge of the Vitra premises survived the major fire in 1981. Real gems from the history of furniture design since 1800 are stored here, closely packed together, and including one-off or extremely rare pieces that only exist in very small numbers, or indeed are unique. This is where the curators, collection heads and restorers work. And here, at the western end of the Vitra Campus, is where a new building by Jaques Herzog & Pierre de Meuron has been built: the Vitra Schaudepot.

A glance behind the scenes

Many museums are now tending towards making part of their storage areas accessible. The focus tends to be not so much on presenting individual pieces on well-lit plinths for educational purposes, nor on emphasizing the individual objects, but on the interaction, the inner connection with other, neighboring objects. This concept goes hand in hand with an aesthetic of the provisional, of the transformed space. Here, it is a permanent glance behind the scenes that becomes the attraction. Moreover, we have the specific Basel tradition of storing, hiding and preserving special goods – such as those from the art market.

Architects Herzog & de Meuron created a significant building of this type back in 2003, namely the Emanuel Hoffman Foundation’s “Schaulager”, which is open to researchers and for individual shows. The “Helsinki Dreispitz” building in Basel, by contrast, is not open to the public. Built next to the freely accessible premises of the FHNW Academy of Art and Design, in its three largely closed-off pedestal stories it houses the archives of the architecture office, models and plans, whereas in the eight floors above one contains offices and the other seven apartments. 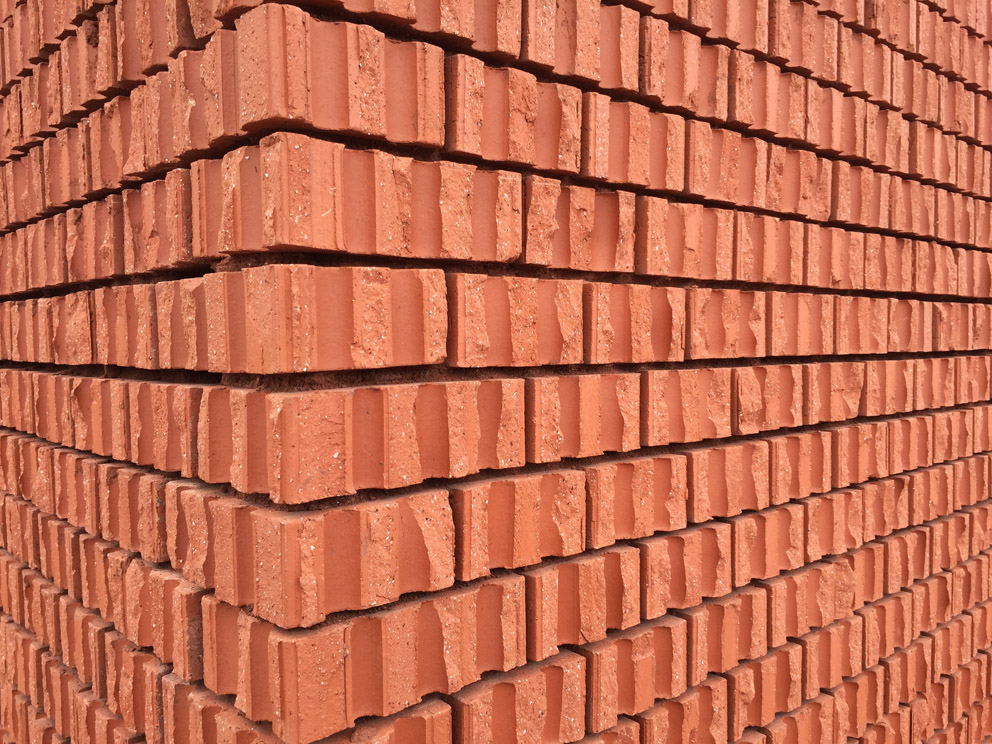 Individualized industrial product: Bricks were broken at the construction site of the Schaudepot and in contrast with the regularity of the neighboring industrial halls of the Vitra Campus make for a highly animated shell. Photo © Thomas Edelmann

As with the Vitra-Haus at the northern tip of the Campus, which was completed in 2010, the building’s outward monolithic structure plays with the basic motif of an archetypal dwelling with a gable roof. Yet unlike the interlocking living units piled one on top of the other and with huge panoramic windows and views of vineyards, industrial and urban landscapes, the architecture of the Schaudepot is hermetically sealed. Photographs that Vitra is presenting of the new build show it in the midday May sunshine. In terms of color, this image is almost reminiscent of buildings by Luis Barragán in Mexico. Yet as you get closer to the structure, this association quickly dissipates. You discern nuances of the brick in terms of both material and color between the new building and its existing neighbor, which houses the offices of the museum’s staff and a café – and then there is the large forecourt, which raises the Schaudepot up from its surroundings with a slightly stepped base. The closer you get to the façade, the more its homogeneous surface dissolves into a diverse granularity.

What you see are the broken clinker bricks, which assumes their specific form in situ. The standardized industrial product has been individualized by hand. In line with the described building type, the edifice has no windows. A building built by fools? Not at all. Almost as in a purely conservational warehouse, the building insulates the valuable collection from outside light and weather conditions. At the opening, the architects and developer both spoke of a “basilica”.

The Campus opens up

It is arguably not least for aesthetic reasons that the western gable wall is perforated by a tall door, lending the building a well-proportioned front. Like the neighboring “Fire Station” built in 1993, Zaha Hadid’s first building, the Schaudepot was recently also excluded from the actual company premises and its perimeter fence. Thus the expressive concrete building and the sober clinker structure form a new focal point of the Vitra Campus. In ten minutes you can walk from the terminal station of Basel’s tram line 8, Weil am Rhein, to the new Campus access point. As such, the Schaudepot is not simply an extension building of the existing museum, but a sui generis pilgrimage site for furniture enthusiasts. 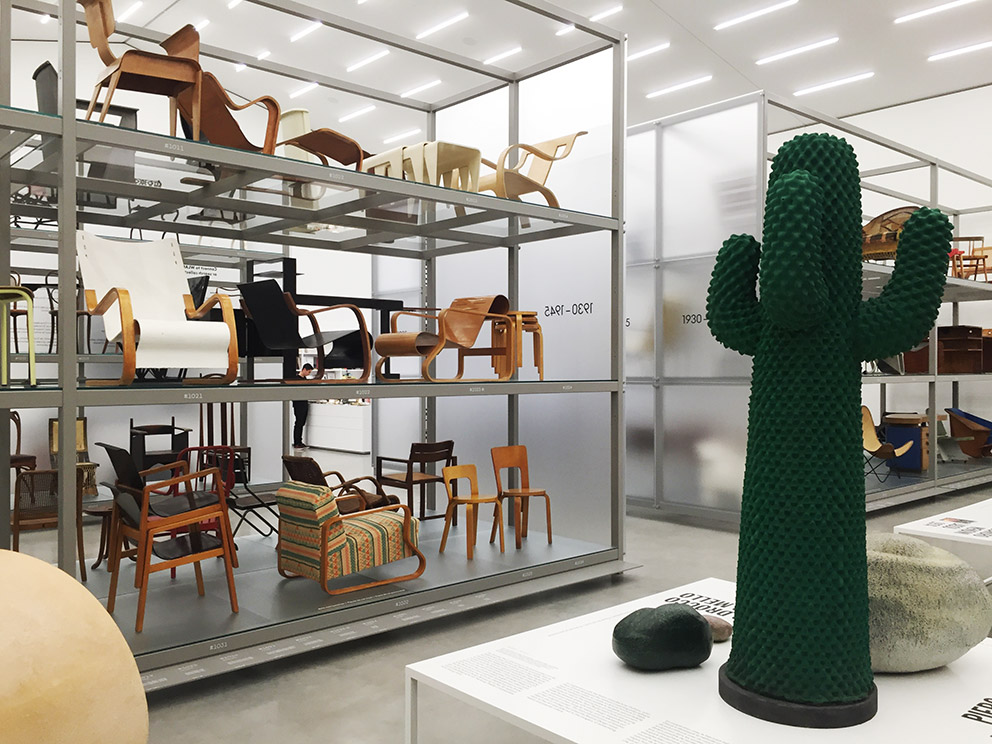 Epochs, materials and forms on show

Inside, the Schaudepot is fitted with traditional fluorescent lighting, which however relies on contemporary lighting technology. This principle also features both in museum buildings by Herzog & de Meuron and in the new extension to Kunstmuseum Basel by Christ & Gantenbein. Even light distribution rather than highlighting individual pieces corresponds to what the collection sets out to achieve. Dieter Thiel designed the exhibition setup. Large shelving units with three rows of glass shelves have been installed on the left and right of a central walkway. The units facing the foyer with cash desks and shop and facing the walkway are coated with a shimmering foil. Otherwise, they enable visitors an unobstructed view of various epochs, materials and forms. The collection is presented chronologically, yet this is no boring orientation measure, for there is no rigid chronology of precise dates, and rather one that creates groups, reveals associations and contrasts, highlights similarities and differences. An analytical gaze at the objects on the lower rows of shelves is direct and inspirational, as we can also make out details. You have to remain content with viewing things from a distance when it comes to objects on the third and top shelf. Perhaps a new kind of accessible museum furniture is needed here, similar to a ladder like the one Jurgen Bey once created for Vitra?

The guided tour for visitors offers basic information at the bottom of each unit. The more in-depth online guide is exemplary, available to all visitors via WLAN, either on their own smartphone or on devices available on loan in the building. Each object on show is labeled with a four-digit number on the shelf, which can be looked up in the online database, containing all sorts of additional information and cross-references. The museum’s claim to belong to the “world’s largest permanent exhibitions and research facilities on modern furniture design” comes across loud and clear. In terms of the intensity of collecting and research activities, in-depth knowledge and resources deployed, the one or other state collection certainly falls behind. 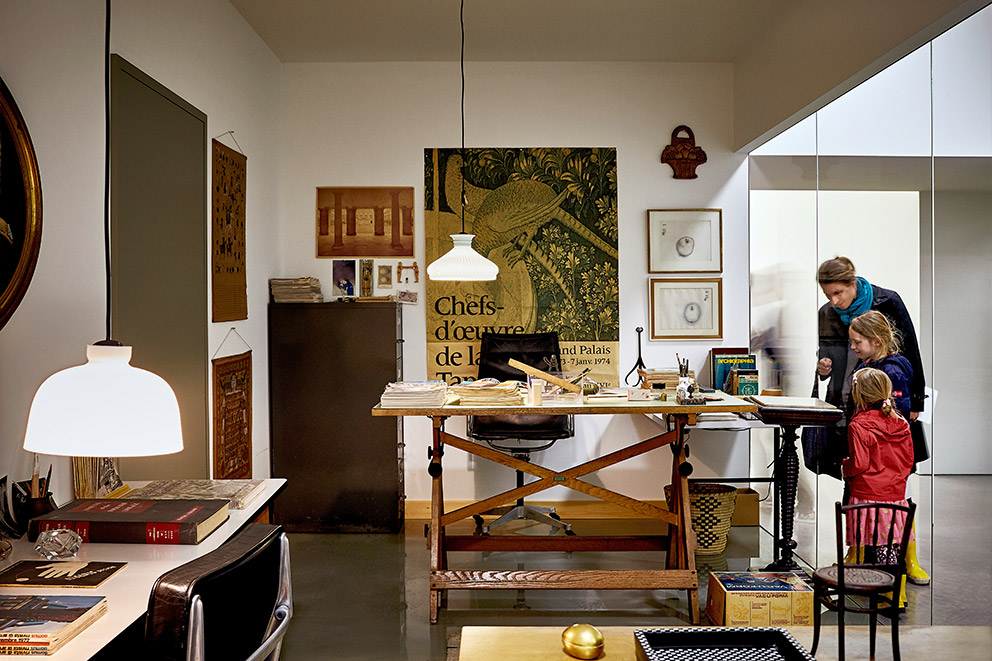 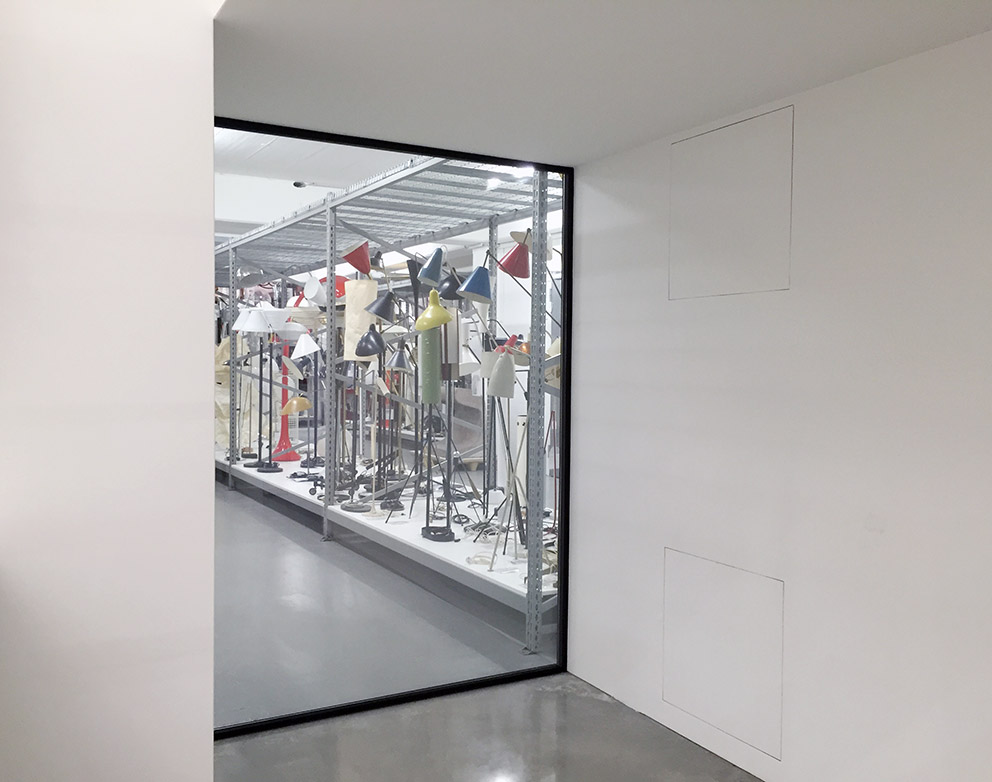 View of the luminaire depot: In the basement of the new building a display window offers insights into the collection stores inaccessible to visitors.
Photo © Thomas Edelmann 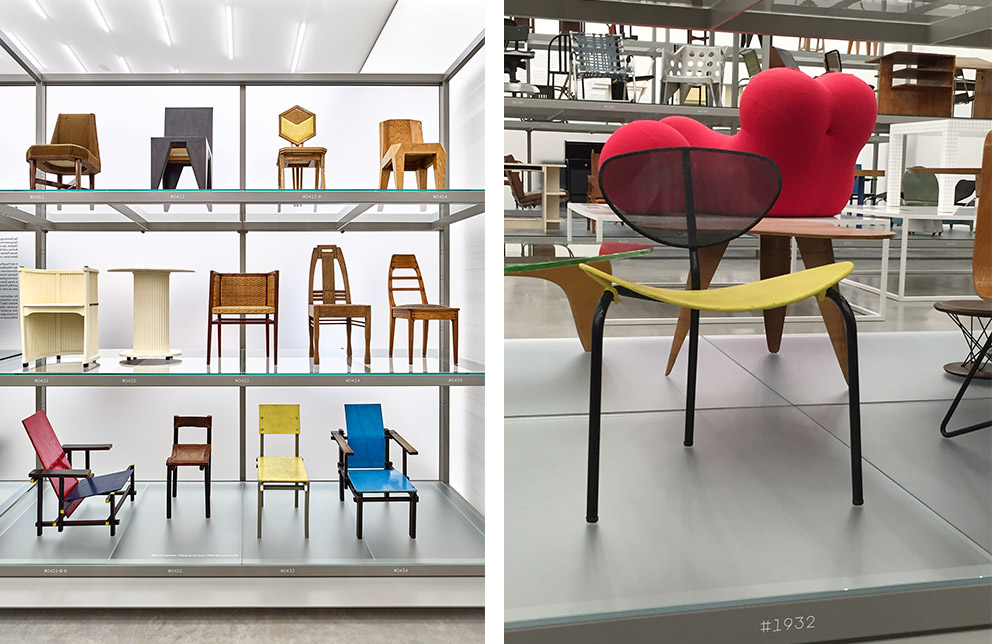 On the left: Traditional and modern at once: furniture from the 1910s from Czech Cubism to Gerrit Rietveld. On the right: The chair “Nagasaki” by Mathieu Matégot from the 1950s.
Photos © Vitra Design Museum, Mark Niedermann, Thomas Edelmann 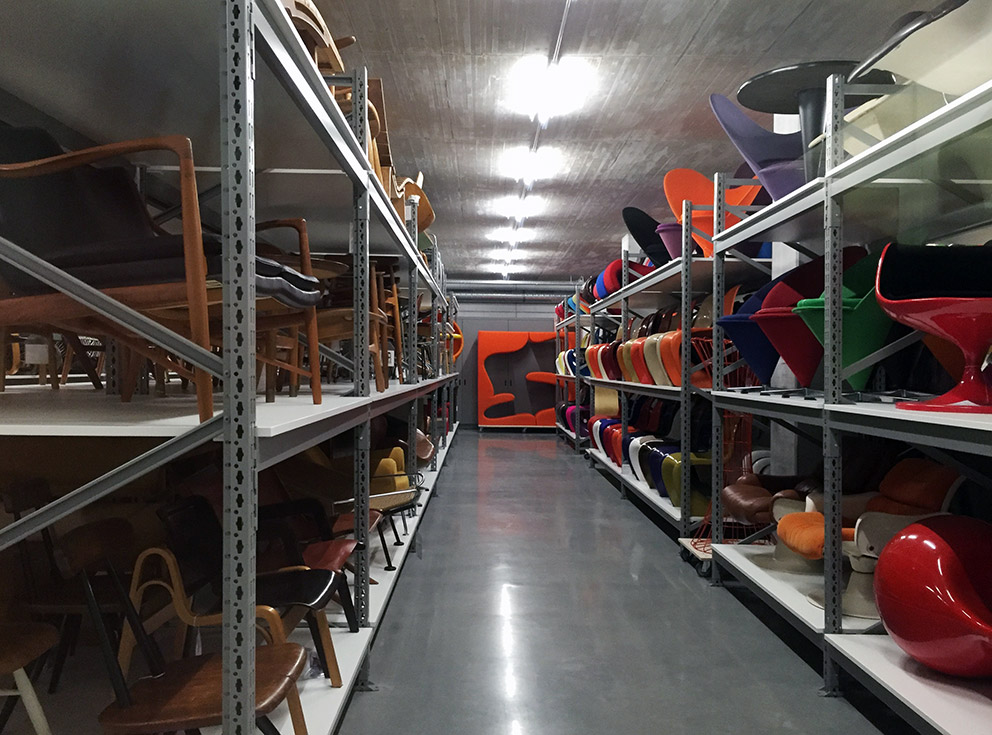 Carefully preserved: Not all of the collection’s treasures are accessible to the public. Glass panes provide a view of the packed warehouse. Photo © Thomas Edelmann 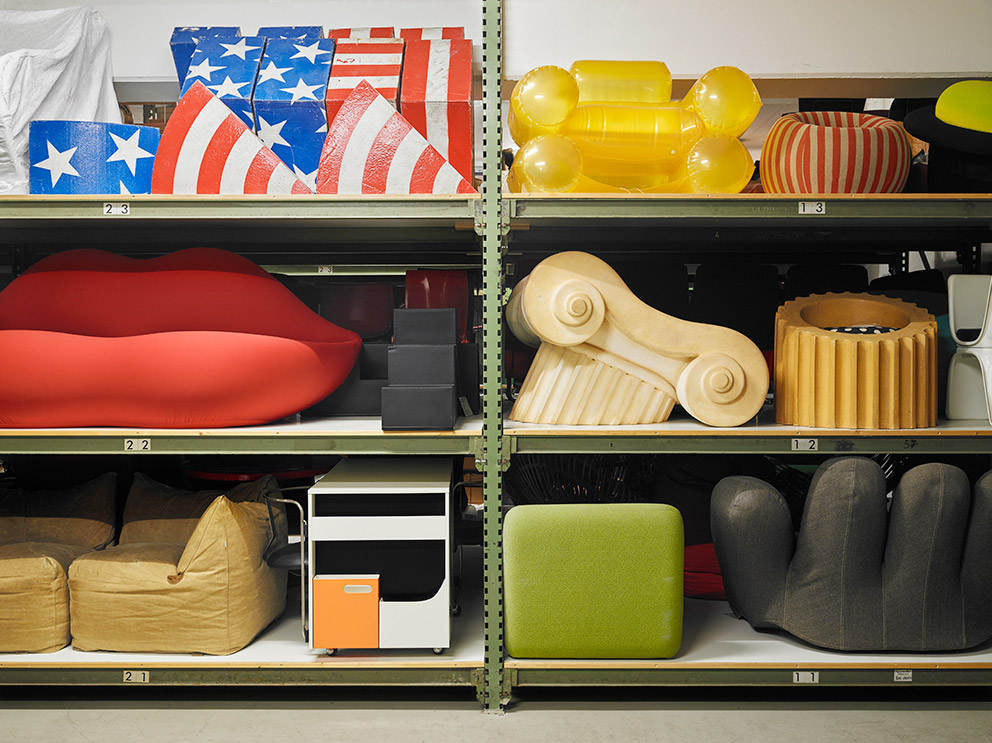 Depot under the Schaudepot: Even some key pieces are not on public show. Photo © Vitra Design Museum, Florian Böhm 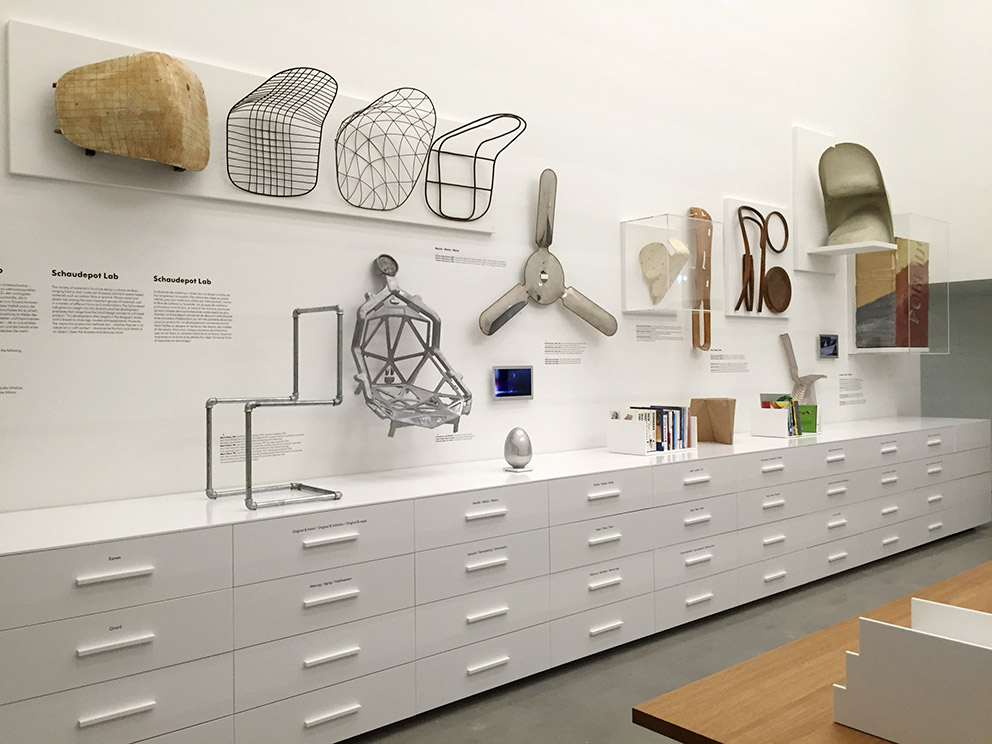 In the “Schaudepot Lab” in the basement, the museum provides background information on the construction, material and production method of items of furniture from design history. Photo © Thomas Edelmann 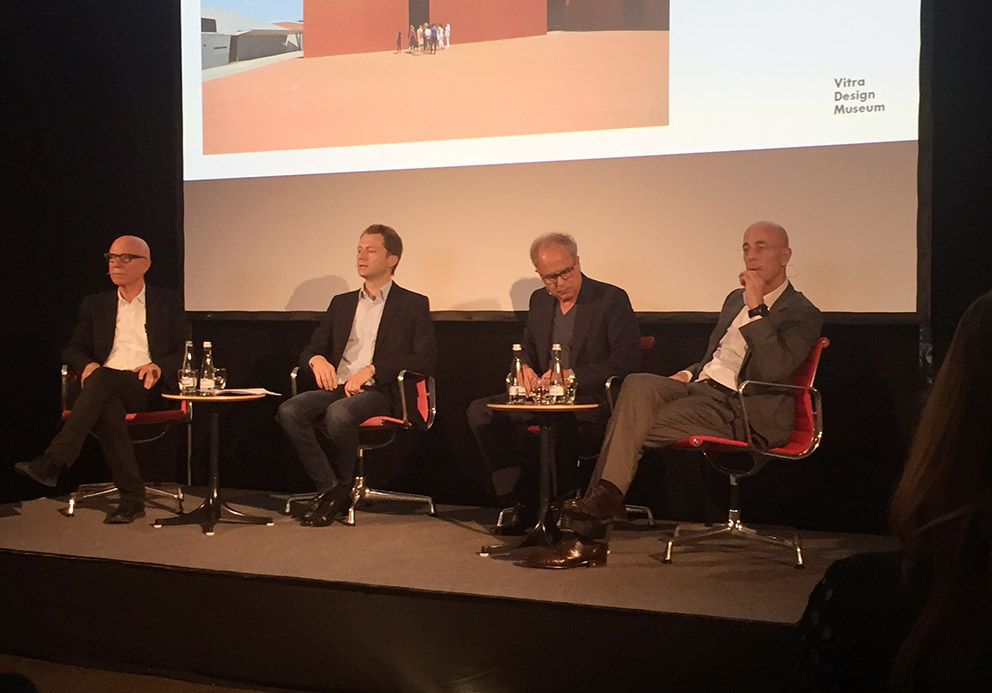