Sometimes a shoe with fur trimming and a narrow female ankle inside is seduction enough. Sometimes there is material in ample supply, sometimes none at all; and sometimes hat and pose simply follow a whim. Then Veronica Compton appears with a scarf wound elegantly around her head, together with Bruno, an enormous Danish mastiff, to yawn or sing a duet together. Dovina sits wonderfully dressed by Balenciaga à la japonaise in the Café des Deux Magots, once again next to a magnificently groomed dog; or she poses amazingly calmly between two clumsily dancing elephants in a slim white evening dress with a black sash across her breasts. An elated Suzy Parker sporting a fantastic tulle dress with an enormous Cul de Paris plays pinball in some or other café while her partner looks on admiringly. And Veruschka both relaxed and elegant charges about playfully pursued by Avedon through the studio and swinging a brocade braid in front of a neutral background.

Richard Avedon (1923 to 2004) has long been deemed one of the most famous fashion photographers of the 20th century. When he first arrived in Paris in the late 1940s, the "American in Paris" (as Philippe Garner called him alluding to Gene Kelly) quickly recognized, albeit perhaps not voluntarily, what options the special flair of the world's fashion capital offered when it came to presenting beautiful women in exclusive dresses. After all, the young, ambitious photographer, who had already extended fashion photography's repertoire through the addition of playful poses (because movement and cheerfulness were to his mind part and parcel of life) was on a secret mission. Officially, Louise Dahl-Wolfe is the one who in 1947 who set to photograph the latest haute-couture creations for Harper's Bazaar. That said, Avedon had received permission to travel to Paris with his wife Doe as model, but had been told to avoid being seen by Dahl-Wolfe. So he took photos everywhere in the city where the situation arose, and his photos captured a great deal of his own enthusiasm for the fact that these epoch-making creations (above all those of Dior's "New Look") were suddenly cropping up in the middle of life. Nonetheless, in those post-War years shortages still abounded in Paris, and most people at times lapsed into hopelessness and apathy.

During World War II and the Occupation, glamour and creativity in the fashion industry lay idle - slumbering, as it were, on both sides of the Atlantic, meaning in Paris, too. There, the revival in fashion brought with it a revival of cultural life. And by bringing the glamour of the pre-War years back to Paris Harper's sought to promote haute-couture which did a lot back then to help kick start the economy. Avedon, who long enjoyed the reputation of being a wunderkind of fashion photography, immersed himself in the fray. Shaped by a fresh, uncomplicated, American zeitgeist inspired by a young and carefree leisure style, which has its romantic counterpart in Dior's "New Look", he cast an objective and innocent glance at contemporary fashion. And it was above all with his outdoor shots that he proceeded to create a new and vibrant idiom for fashion photography. Be it by day or by night, his expeditions through Paris were inevitably romantic and playful, but never melancholy.

The inventiveness and scope of Avedon's photographs from this period are enormous. Whether he photographed Elise Daniels in a fitted jacket by Dior, in a circle of laughing firefighters, or in Marais in an elegant twin-set by Balenciaga together with weightlifters and circus performers, he hardly ever cut his model offer from the surroundings, never isolated them from the everyday in a fascinating city full of reawakened joie de vivre. Looking at the elated and vivid scenes today we can only surmise how startlingly different and positive Avedon's shots must have seemed at the time.

Not only in these early photos does he always draw a picture of the elegant, glamorously dressed woman - only very rarely did the models seem lost in reverie let alone elegiac or even arrogant. Avedon's goddesses sit in cafés, smoke, drink and joke. They move among normal people, and they show that you can be dressed stylishly everywhere and be seductive. Even though it did not always meet with the approval of Carmel Snow, the legendary editor of Harper's, Avedon also found it appealing to show women in moments when they do not realize someone is observing them; doubtless this aspect contributes to the lively impact of his images. Yet first and foremost his photographs celebrate women who possess a unique, individual beauty that often does not meet the norm, women, who move quite naturally in an age full of events that were never there before, who are both self-confident and free of a conventional idea of perfection. Avedon once said that "it is hard to describe what for me is a woman's beauty. None of the women I find beautiful has a perfect face. On the contrary, I am repeatedly taken by something unforeseen appearing in a face or in the proportions. The most beautiful woman who ever sate before my camera was Signora Gianni Agnelli." The portrait photograph he took of her in 1953, and in which nothing distracts from her sublime presence, was to become one of his trademarks.

That said, in his attempts to trace types of beauty in keeping with the day Avedon not only benefited from his own unprejudiced eye and the natural charm of the situations in which he often places his models. Be it in his fashion shots or his portraits (including the images of "In the American West", which he was to take from 1979 to 1984) Avedon fulfilled the beholder's expectations and yet dashed them, too. And in addition to body, color and light he repeatedly employed movement in all its facets as an artistic instrument - he often worked with something so difficult to control, namely blurred motion, the renowned "Avedon Blur".

Avedon clearly had an affinity to film, to which he paid homage in his images just as he did to Paris as a place where the new lifestyle sought new forms. "Avedon's brilliance," writes Philippe Garner, "consisted in using Paris as a readymade, as it were, in his compositions, and thus instilling the genre of fashion photography with new meaning by appropriating the narrative approach of the filmmaker and introducing a choreographed element into his photography." Just how strong this affinity in the early years to film was - and Avedon primarily loved intelligent comedies such as Ernst Lubitsch "Trouble in Paradise" - became abundantly clear in 1957 when the movie "Funny Face" starring Audrey Hepburn and Fred Astaire hit the theaters. It tells the story of a fashion photographer, who persuades a beautiful, young but indecisive woman to become a fashion model. Fred Astaire plays photographer Dick Avery, a figure based on Avedon, who also acted as adviser for the film.

Avedon did not simply tap the film as if it were simply one more context. What interested him was firstly the inner logic of a scene, its "look", not to mention the fact that a film image always refers to the one that follows, in other words is open to the continuity and continuation of an action. Many of his narrative photos have a similar impact; look at them and you find yourself continuing before your mind's eye what you first seem in them and what thus begins in them.

Then there is Avedon's game with glances. During his first trip to Paris when he was to photograph a brown woolen suit with a fitted jacket sporting Persian lamb trim and a wide, swinging skirt in the classic Dior style he went with his model, Renée, to the Place de la Concorde in the first morning light. The young man rushing past with his friends could hardly believe what he saw. His skeptical gaze moves across the model as she turns in a lively manner to face the three passers-by and across to the photographer who was standing in an elevated position. As a result, the gaze of the camera not only extracts a piece of reality but also contains an answer in the gaze of the passers-by. What also makes this shot interesting is that Avedon employs the girl's turn to highlight the lavish wealth of material with which Dior bids farewell to wartime rationing, and because Avedon only selected the image that we see later in the day. It did not appear in Harper's, partly out of concern the man's direct gaze might distract from the model and suit.

Avedon relished playing with gazes and does so frequently. In winter 1950, his mentor Alexey Brodovitch from Harper's Bazaar published a feature on him and his competitor Irving Penn from Vogue, and asked the photographer to say something about what motivated him. "Photography," Avedon declared, "has always been a kind of double-sided mirror for me. On the one side I see my motif and on the other I see myself." In other words, at least two gazes meet in the mirror of photography, that of the photographer and that of the beholder of the image. But sometimes the subject also looks back; and sometimes the photographer recognizes himself in this response.

Another shot taken in 1956 (again on Place de la Concorde) depicts Suzy Parker and Robin Tattersall - he in a dark suit, she in a bell-shaped salt-and-pepper tweed coat by Dior with wide three-quarter length sleeves and necktie - engaged in pair skating on roller skates. Once again we are struck by the lightness and carefree way with which Avedon presents a heavy coat worked from abundant material and also sketches the image of a woman who might be clad in highly exclusive garments but is nonetheless prepared to do the craziest things. Even though the settings change over the course of the years, Avedon had soon made stars out of models and Cape Canaveral stands instead of Place de la Concorde, Avedon's feel for the narrative and his ability to stage his settings coincide constantly with his immense sense for portraiture.

All this and much more can be perused in the magnificent publication "Avedon Fashion" - through a large number of beautifully printed photographs and in texts that provide information on what it was like back then in the editing offices of Harper's and Vogue, how Avedon's style developed and altered and how the one or other shot came about.

The publication not only contains a selection of Avedon's best-known and best fashion photographs; it is a true delight to leaf through. Together with the essays by Philippe Garner, Carol Squiers and Vince Aletti it is also proves to be a contribution to the history of fashion, society and culture in the second half of the 20th century, followed from an equally unique and fascinating perspective. Namely that of a master of fashion photography. What you do wish is that to make the panorama complete the collection would also include several of Avedon's portraits of artists and actors, and perhaps the one or other photo series once published in Bazaar or in Vogue for which Avedon worked from 1966 onwards. But, as if to compensate for this, the model on the cover (like that featured in April 1965 in Harper's Bazaar) can wink most beautifully. 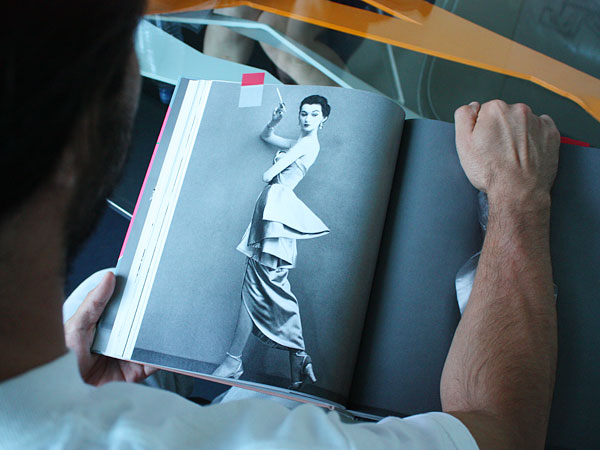 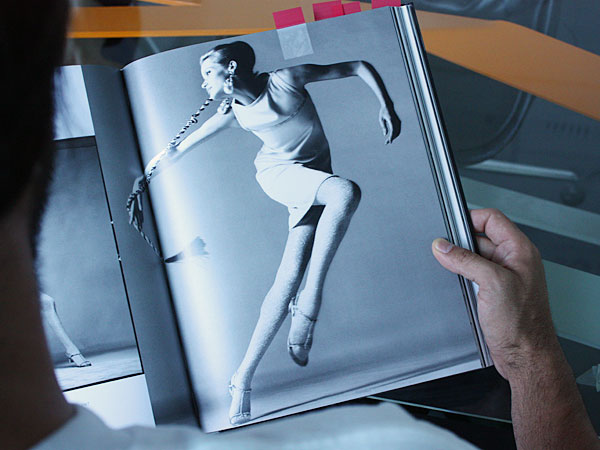 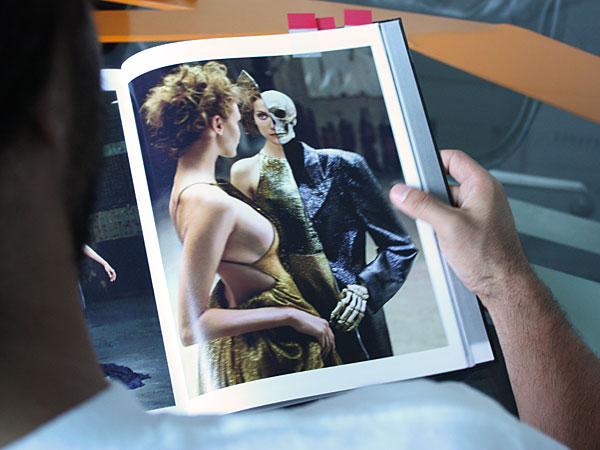 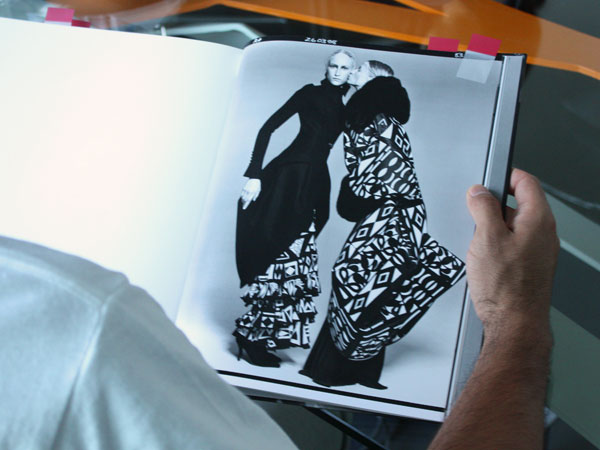 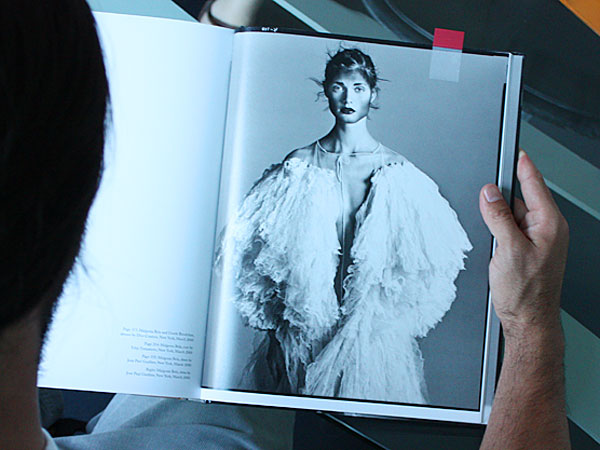