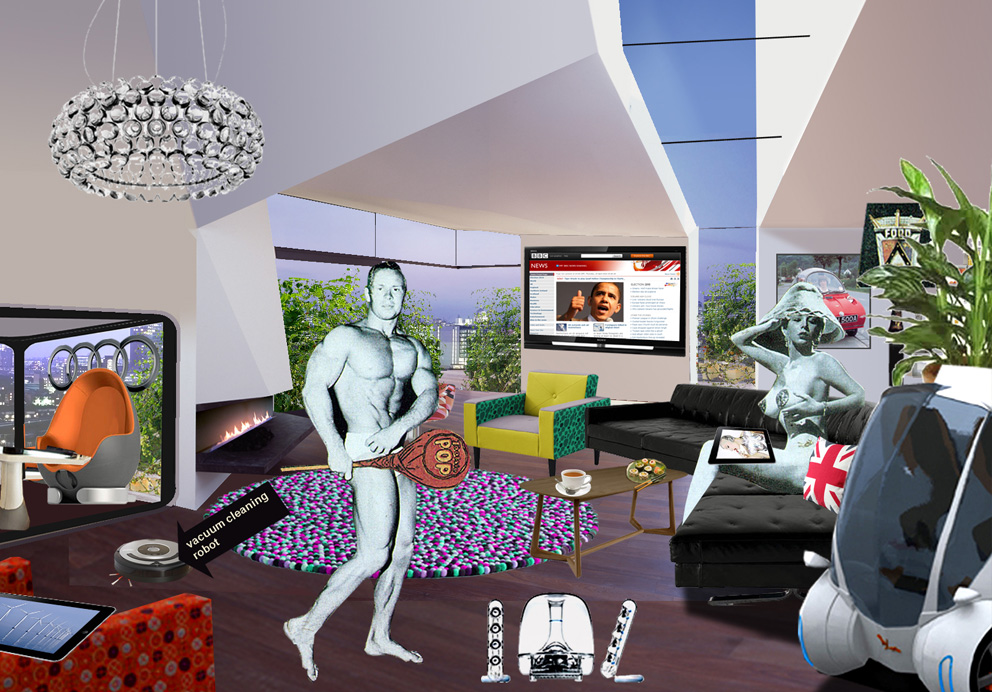 In summer 1956 London’s Whitechapel Art Gallery hosted the exhibition “This Is Tomorrow”. Inspired by Sigfried Giedion’s book “Mechanization Takes Command” and Buckminster Fuller’s experiments, architects, artists and scholars had spent years mutually preparing the show, and presented in war-ravaged London an astonishingly trailblazing vision of an everyday “modern life” that was swiftly becoming commercialized and ruled by technology. In a mixture of technological euphoria and cultural skepticism, the organizers combined social critique with a belief in progress in their artistic environments, celebrated Sci-Fi and Pop culture. For example, artist Richard Hamilton contributed a collage entitled “Just what is it that makes today’s homes so different, so appealing?”, that not only accurately anticipated the emerging consumer and media society, but also defined the setting in which future consumption was to occur: the apartment. The collage, which doubled up as the exhibition poster, was assembled from ads for vacuum cleaners, TVs, tape recorders and corner couches cut from US magazines such as “Ladies Home Journal” and “Tomorrow’s Man”.

In the 1960s, the stance expressed in the exhibition inspired the Archigram group to come up with some of the most visionary technology-driven urban utopias that not only questioned the idea of the apartment but the vey architecture of the home. One notion was the “Plug-In City”, designed like an experimental electronic plug-in board, another the “Computer City”, in which life took place completely between technical infrastructures and data flows. In the current context of digitalized lifeworlds and cities plastered with surveillance cameras and sensors, the so-called “Smart City”, these visions seem very topical. In his 1965 essay “A Home is Not a House” Reyner Banham even went so far as to declare the architecture of the home of the future to be completely superfluous in light of technological enhancements: “When your house contains such a complex of piping, flues, ducts, wires, lights, outlets, ovens, sinks, refuse disposer, hi-fi reverberators, antennae, conduits, freezers, heaters—when it contains so many services that the hardware could stand up by itself without any assistance from the house, why have a house to hold it up? When the cost of all this tackle is half of the total outlay (or more, as it often is) what is the house doing except concealing your mechanical pudenda from the stares of folks on the sidewalk?“

The dream of the automated house

While visitors flocked to the Whitechapel Art Gallery, on the other side of the Pond the future of the home was being explored by an equally interdisciplinary set of actors, albeit under a completely different mantle: Plastics maker Monsanto was searching for new markets for its modern material and commissioned the architecture faculty at Massachusetts Institute of Technology (MIT) to do basic research on the use of plastic in contemporary apartments, and identified Walt Disney as a businessman who was very upbeat on the future and was desperate to find concepts for his newly-opened Disneyland theme park that would pad out the “Tomorrowland” there, which was anything but cutting edge.

The result of the joint efforts was presented in 1957: The “ Monsanto House of the Future” in Anaheim, California. A rounded space station made of white plastic in which the benefits of modern life with an interior boasting technology to the max (likewise made of plastic) were presented. In the commercial on the house, an average WASP family dreams of a life in which everyday activities such as cooking, washing, cleaning and sleeping are all controlled by pushing a button. The “Monsanto House of the Future” thus marked the beginning of the evolution of the “Showcase Smart Homes”, those life-size demo objects of technologically-upgraded homes that were henceforth to be found at all world expos and technology fairs. They include Ford’s house of the future in “1999 AD” (1967), the zany “Kissimmee Xanadu House” (1985), Microsoft’s “Smart Home” (1999) or the “Living Tomorrow” house by Belgian inventors Maurice and Frank Belien (2007) – to name but a few.

The slick world of opportunities

Many of these demonstrations of future living worlds were absolutely accurate when it came to anticipating what our everyday lives would now look like: From preparing food in the microwave to online shopping and home offices driven by videoconferencing and email, these visions of Smart Homes already offered it all.

So 1990s! The Microsoft Home can basically do everything the market now offers. Video © Microsoft Corp.

While the technological trend seemed to completely follow the concept of the meme – what was once shown s a possibility is now made possible – the inhabitants of such apartments of the future seem surprisingly old-fashioned. In all the Smart Homes the house is a refuge, a standalone, self-sufficient and an all-in expert at the service of the nuclear family of dad, mom and two kids. The family no longer needs to leave its automatic home, because what everything it needs is already at hand or at least available at the press of a button or on-screen. Actual physical interpersonal contact is limited to other couples who are friends, who might just pop round for dinner on a special occasion. Work colleagues, teachers and salesmen simply get ‘switched on’, and otherwise the family lives in “smart solitude”.

That said, our cities are changing massively as is the way we live in them: Debates and the evolution of alternative concepts for living communities have long since left the level of Hippy flatshares behind them. New groundplans, new worlds of living and working, and alternative financing models for contemporary life tend almost completely to exclude the intelligent house technology that was inserted into the ever-identical living format of the Smart Home. Today’s visions of tomorrow’s Smart Homes are as regards the transformations of the lifeworld and its inhabitants, almost all rooted in yesterday.

Accommodate and bowing down to the home machines

All the criticism outlined above has actually accompanied the development of the Smart Home since the word go. As old as the efforts to deploy technological innovations to simplify everyday domestic bliss is the critical satire of precisely those ideas. There are countless examples and each in its own way highlights how inhabitants have to accommodate the technical appliances and bow down to them, our impotence when faced by a machine that simply does not do what it is intended to do and forces people to abandon their customary movements and the structured focus of our normal way of thinking.

For example, in the 1936 movie “Modern Times” Charlie Chaplin has to play the guinea pig and gets strapped to an eating machine that is, to put it mildly, still a long way from being developed ready for market, and shows us in his inimitable way how good intentions can come a cropper. In Jacques Tati’s “Mon Oncle”, released in 1958, the inhabitants in equally comical fashion bow down voluntarily to the conditions dictated by the technology of the modern home. The iconic Villa Arpel (designed by painter, not architect Jacques Larange) is ruled by an aseptic but actionist automatic home that responds as hysterically as do its inhabitants.

The list is probably endless and there’s hardly anyone who will not have their own story to add about how purportedly supporting technology did not make everyday life easier – far from it. For example, the author had to interrupt his meetings and phone calls in an office in a building designed by Richard Rogers almost every hour as clouds passing by on sunny days caused the entire confused façade to start unfurling its sun panels with a squeak, only to refurl them immediately.

Start with people when thinking architecture

What becomes especially clear in the Pop culture critique of the automatic home: The Smart Home needed to be construed with renewed zest. Not until humans and how we live, work, love and think today becomes the focus of innovation research, can the innovation arise that the shell, the habitat is thought in terms of the people and not solely of the possibilities that technologies offer.

When thinking about new paths to tomorrow’s home the idea must not be to banish technology from the home, but instead to liberate the home’s interior of visible technology that today goes by the name of “Zero UI” as in user interfaces. Whether in future we emulate Tom Cruise in “Minority Report” and boasting data gloves perform a ballet of movements in front of room-size displays or copy Robert Downey Jr. in “Iron Man” and go about our work in holograms of complex construction plans, is something that presumably will be only the domain of special agents and super-heroes in the future too. A much more relevant future vision was served up recently by Spike Jones in his movie HER. It takes place in the near future and in it Joaquin Phoenix falls in love with a computer voice that accompanies him everywhere as his personal assistant and is his practical and emotional crutch when handling everyday life. Jones’ set designer K.K. Barrett created sets for the film that hardly differ from our own homes. The emphasis being on hardly, as the protagonist’s apartment is almost the opposite of Hamilton’s collage: Nowhere do you see technical units, control interfaces and other appliances. And his work place is no different. And even the city itself where the movie takes place is surprisingly tech-free. Barrett’s key reference when doing the sets for the film is said to have been a book on futurist technologies, but he insisted that none of the ideas of the future described in the book popped up in the movie. Barrett explains: “We decided that the movie wasn't about technology, or if it was, that the technology should be invisible. And not invisible like a piece of glass. Technology hasn't disappeared – it's dissolved into everyday life.“ – This Is Tomorrow.

Stefan Carsten, futurist and urban geographer, combines the themes of the future, the city and mobility in his work. He regards the future as both a perspective and a method in order to explore and evaluate current urban, mobility and lifeworld issues. This includes strategies and tactics as well as innovations and transformations for viable cities, space, organization and people of tomorrow. www.stefancarsten.net

Ludwig Engel works as a futurist and urbanist on questions dealing with long-term strategy, the future city and urban utopias. He studied economics, communication sciences, and cultural history in Berlin, Frankfurt/Oder and Shanghai. From 2005-2011 he worked at the Daimler AG think tank for future studies and strategic long-term planning. After various teaching assignments in the fields of strategic foresight, futurology, urban planning and urban futures, he currently teaches at University of Fine Arts Berlin (Strategic Foresight and Futurology) and Technical University Berlin (Architecture Design Innovation Program). www.ludwigengel.net

In Spike Jonze’s film “Her” there are hardly any technological gadgets left in sight, although the world is full to overflowing with technology. Video © Youtube, Vipmagazin 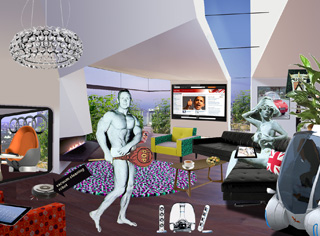 Post-War Modernism promised to make everyday life easier – at the press of a button. Is digitalization simply continuing that trend? 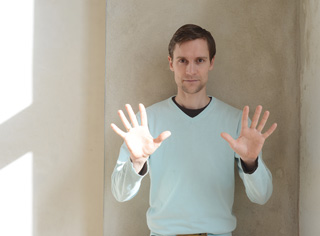 You can control all sorts of things with a movement of your hand. Ludwig Engel talks to gesture researcher Julius Hassemer. 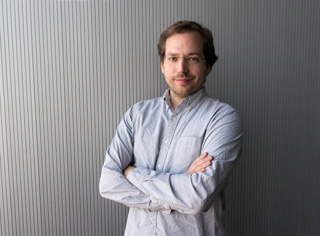 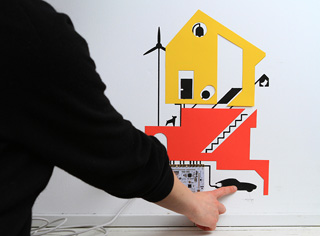 I am the Smart Home

Digitalization of living spaces changes architecture. How we will interact with rooms in the future? 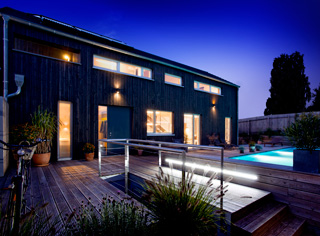 A wooden house with remote control 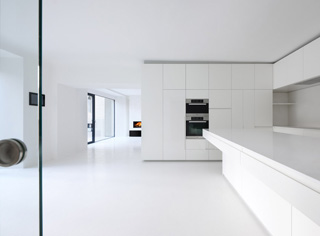 As fresh and white as the Alpine Edelweiss

Fuchs und Peer Architekten have thoroughly modernized an apartment in an old building in Northern Italy which now boasts a gleaming white finish. Its networked HVAC system by Gira is convenient and energy-efficient.