The kitchen today embodies a lifestyle, an idealized place of imagination, a kind of paradise of making, preparing, communicating. Even if kitchens are very much part of our everyday lives, we have long since been expelled from the kitchen as the ideal place of thinking and doing, just like Adam and Eve were banned from paradise.

Once food comes into the equation, we find ourselves in a highly controversial situation: We pay less than ever for pre-cooked meals. The cheaper ingredients and animal feeds, the better. And even in Germany part of the population has to rely permanently on free foodstuffs, which those in need pick up from charitable food banks. As regards book production, there is hardly a section as effervescent as that of cookery books; the same holds for diet guides. Cooking on TV - be it in the studio or test restaurant - has become even more popular than at the time Clemens Wilmenrod started out as the first TV chef. That said, cooking at home in our private kitchens has lagged far behind in the popularity rankings. We may detest the dark side of factory farming but we consume more and more meat. Our ideal of the perfect body is athletic and slim. Fact is, in 2009, every second adult in Germany was overweight.

Our fascination with the kitchen as a living place fits with this contradictory pattern, too: The kitchens in our homes are often compromises, architectural leftovers, crammed with machinery for chilling, heating and cleaning, plus other sorts of equipment that we may deem absolutely essential, but which more than not clutter up our cupboards, shelves and worktops. During the week, we tend to dash in and out of our kitchens joylessly, heating up pre-cooked meals and eating them more or less on the go. At the same time, we dream of that neat, fully functional, perfectly equipped kitchen that will enable us to cook up amazing meals at the flick of a whisk, topping the culinary fare of star chefs even. In sum, the kitchen as a zone is perpetually caught between the Scylla of self-deception and the Charybdis of megalomania.

The four types of cooking

The average German household spends between 5,000 and 10,00How about stainless steel?0 euros on a new kitchen, according to Cologne-based kitchen dealer Andreas Rütt in a recent interview by WDR broadcasting station. Those looking for a cut above the rest, a steamer or induction hob, for example, will have to fork out at least 15,000 euros for something that really cuts the mustard. That said, the average German kitchen is between nine and 12 square meters in size.

Forsa market research institute examined cooking habits in Germany on behalf of kitchen appliances manufacturer Miele. In addition to testing the brand awareness of known manufacturers, Forsa also distinguished between four "cooking types". These are "smart cooks", "organic cooks", "epicures" and "tummy fillers". While the first two groups take great care to separate the freshest and best ingredients from the chaff, the "tummy filler" type, for example, is "reluctant to experiment" and mainly opts for ready-made meals and frozen foods.

The kitchens we get to see at "Living Kitchen" are perfect, the prime cut, and simply beyond belief. For starters, they are sexed up with celeb TV chefs who keep indulging visitors with their divinely delicious fingerfood creations. If you feel inclined to ponder the why and what of these new kitchens, you may want to remember the words of the philosopher Georg Wilhelm Friedrich Hegel. "Only what is rational is real and what is real is rational," Hegel wrote in his "Elements of the Philosophy of Right". Perhaps Hegel could still be won over for the design critics. For it was precisely their objective he defined as early as 1808 in his "Philosophical Encyclopedia": "The actual judgment on an object entails comparing its nature or true universality with its particularity or the properties of its existence; namely comparing what it is with what it should be."

What then is the new reality proclaimed by manufacturers of kitchen furniture and household appliances? Alno presented its design study "marecucina" that takes its cue from existing product lines and, as it says in the press release, bridges "vacation time and everyday life". Already presented at Milan, "marecucina" has now been further refined, donning the shape of a 1950s sports yacht. The worktops are made of walnut. Straight-line and L-shape versions are now available alongside the boat-shaped kitchen island, likewise featuring maritime motifs.

Like most cutting-edge kitchens "marecucina" does not have handles and it seems to float, an effect enhanced by its recessed base. Its foldable bow provides storage space, the dishwasher sits flush with the boat's hull. The illumination conjures up images of a mast and sail. Plus there is a motorized extendable extractor fan to propel air out.

Matteo Thun's "La Cucina" presented by Riva1920 along with the American Export Council likewise has the air of a design study project. It is the designer's intention to combine tradition and authenticity in a modern style. The kitchen is conceived of in three parts: a place for fire, one for water, and the central section - the place to eat. The clear minimalist silhouettes of common box-type cabinets contrast sweetly with the central place of communication that is archaically situated under the rods of a willow tree. In this project, Thun also practiced recycling, namely by placing in a new context the American red oak and walnut wood previously used for an installation at the University of Milan.

Top-of-the-line manufacturer Poggenpohl showcased a new version of its Porsche kitchen, also known as the "kitchen for men", now boasting a front design made of laminated carbon and glass. Properties such as being lightweight and the ability to save the driver's life in high-speed accidents make a lot of sense when building Formula 1 racers, but mainly have a decorative function in the kitchen and are, as yet, unparalleled in their new application context.

How about stainless steel?

Stainless steel as the must-have kitchen material stoked the oven of "We-cook-like-the-pros" movement propagated by designer, passionate cook and critic Otl Aicher and others. The professional kitchen, pared to the essentials for private use in terms of equipment and technology, was the new revelation for the enthusiastic amateur chef. A marketing idea of true genius it was, for it transformed the producers of what was more or less exchangeable box-type furniture into brand manufacturers offering individual visions of cooking. Yet for a while it seemed as though the steel kitchen would not fit the trend of opening up the kitchen space to the living environment. Now designers Fritz Frenkler and Anette Ponholzer have created "Pur11" for Forster, a manufacturer of stainless steel kitchens as yet mainly known in Switzerland. The Forster brand, no.1 in Switzerland (and along with Warendorf and Piatti part of the Swiss AFG Group) wants to soup up the stainless steel kitchen to form an attractive transition to the living area. A self-supporting corpus, sandwich structure, flush silhouettes, smooth surfaces and magnetic kitchen accessories are all destined to underscore this style.

iPhone and iPad users may well ask themselves why their smart devices have not yet been equipped with a hob function. There surely must be an app for it, no? Gaggenau, the top brand among the appliances made by the Bosch-Siemens Group, is aiming at all those who like to control things with their fingertips with its new full-size induction hob "CX 480". Unlike its predecessors, the hob no longer has fixed rings for certain-size pots. Those wishing to switch and swap big and small, front and rear in the course of a single cooking session will love Gaggenau's new, flush cooktop surface boasting 48 immediately adjacent and laterally offset micro-inductors. If they can keep the tips of their fingers clean for control, that is.

Turn on the tap!

The future of drawing water is the subject of a study conducted by Dornbracht, whose electronic kitchen fitting - derived from the eTool that Dornbracht already realized for showers - will soon control faucets, pop-ups and detergent dispensers centrally. The water supply can be activated and stopped via a foot sensor. Dornbracht moreover presented its new "Water Dispenser", a system that rolls faucet, water filter and hot water tank all into one and supplies hot water at the pull of a lever.

What does an A++ refrigerator look like? Completely unspectacular, banal even! And an A+++ dishwasher? Kind of like a car fitted with an automatic start/stop system. Meaning not any different. And yet it bears considering why manufacturers such as Siemens are not making models such as their "ecoStar2" (annual consumption 205 kWh, 2053 liters of water for approx. 280 washes) standard in their highly varied equipment range. Will consumers soon be able to purchase appliances that even have five or more pluses following the A energy label? In any case, the significance of such labels is no doubt limited, all the more if the manufacturers keep launching ever new appliances with even higher load capacity, as is the case with washing machines, which in many single households burn far more energy than their more compactly designed predecessors.

The kitchen as a "counter space"

There is much to be said about kitchens. Unlike chairs, sofas or tables the kitchen is a visionary, nigh utopian object. To all those kitchen enthusiasts marveling at its ingredients and wishing to grasp the bigger picture between industrialization, automation and design and experience it first hand, I would recommend a trip to the New York Museum of Modern Art where the kitchen is celebrated as a counter space. With her exhibition "Counter Space - Design and the Modern Kitchen" curator Juliet Kinchin presents the kitchen as the sensor of changing technologies, aesthetic systems and ideologies. The comprehensive webpage to the exhibition with its abundance of different materials is well worth seeing.

I close with the words of Hegel: "Once the realm of ideas is revolutionized, actuality will not hold out." 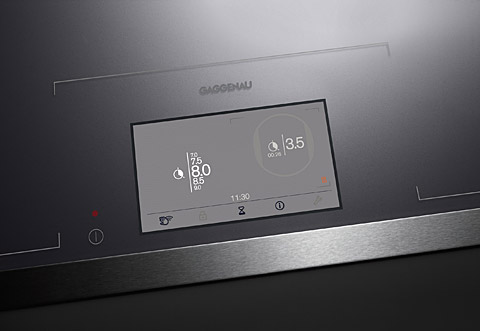 Gaggenau is aiming at all those who like to control things with their fingertips with its new full-size induction hob “CX 480”. 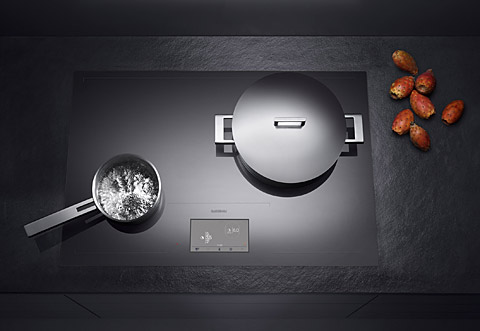 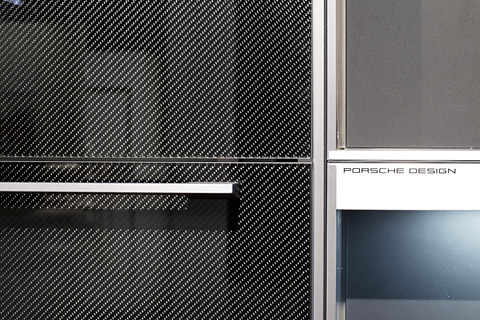 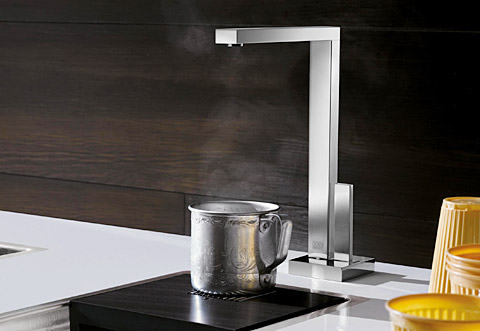 Dornbracht presented its new “Water Dispenser”, a system that rolls faucet, water filter and hot water tank all into one and supplies hot water at the pull of a lever. 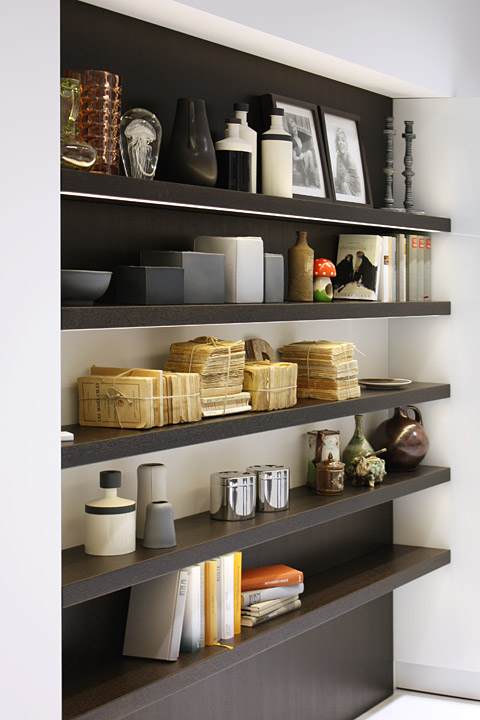 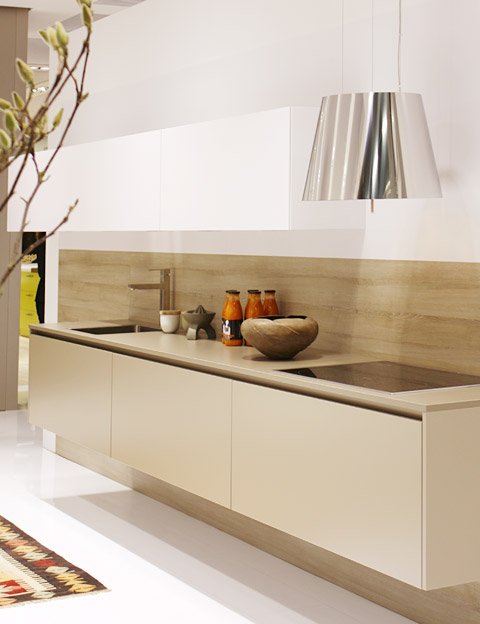 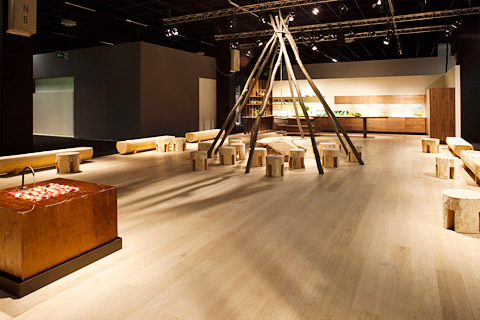 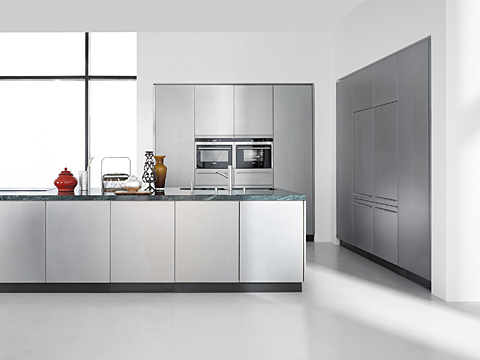 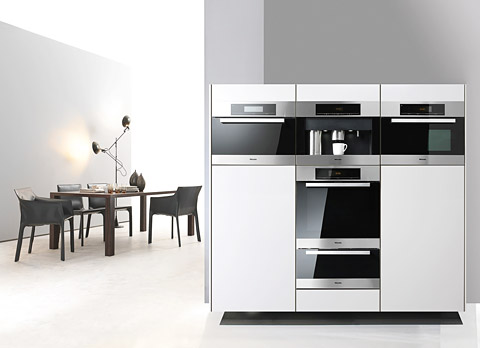 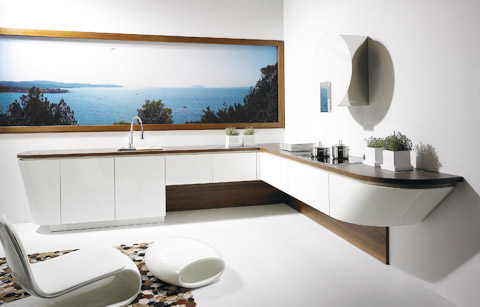 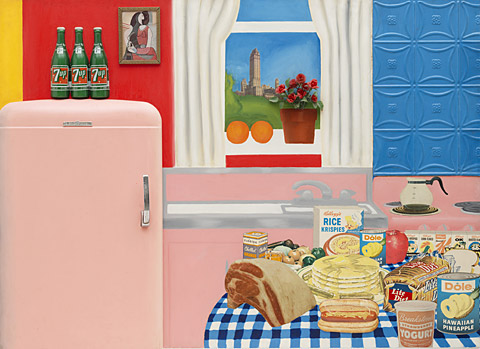 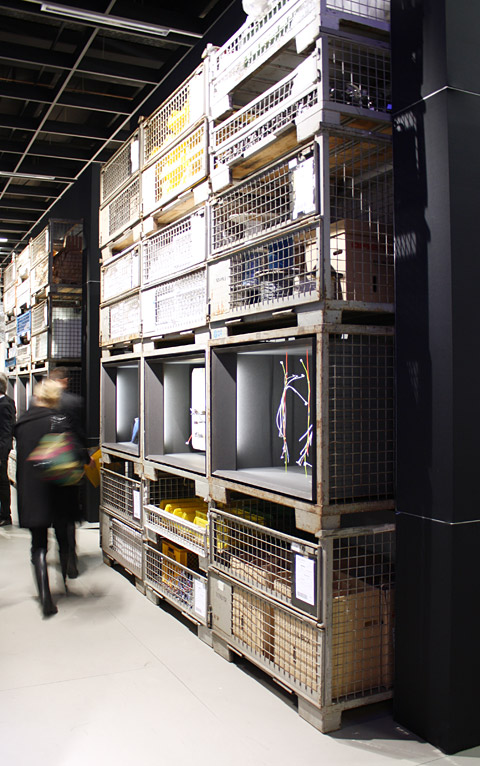 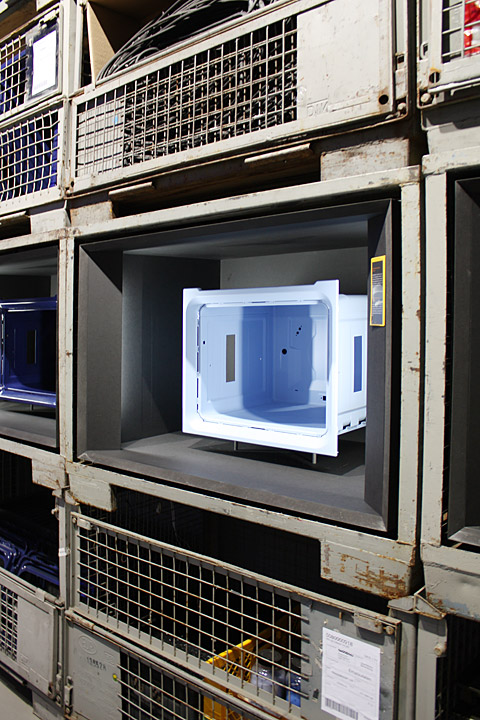 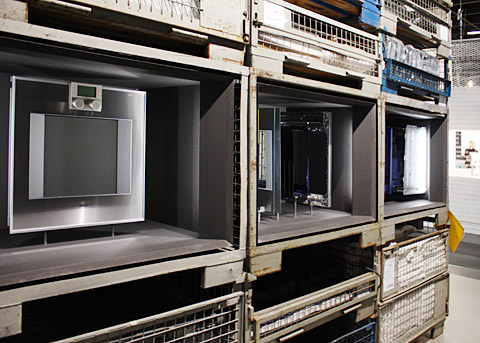 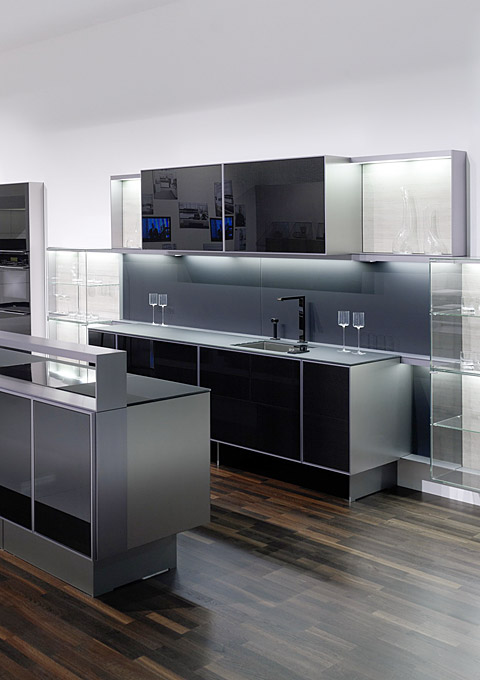 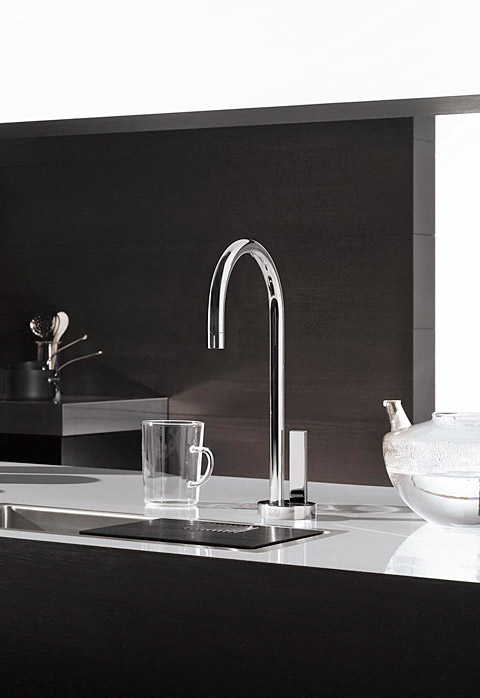 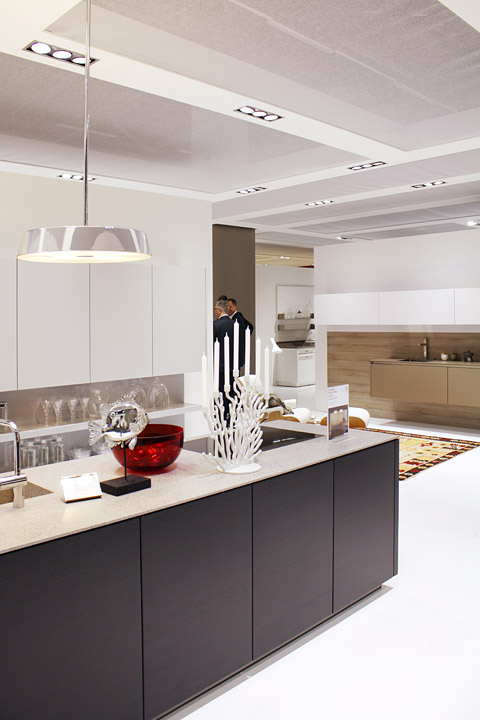 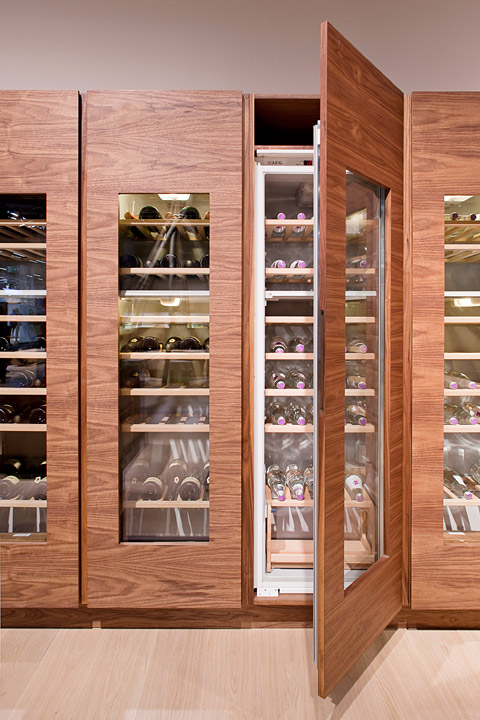 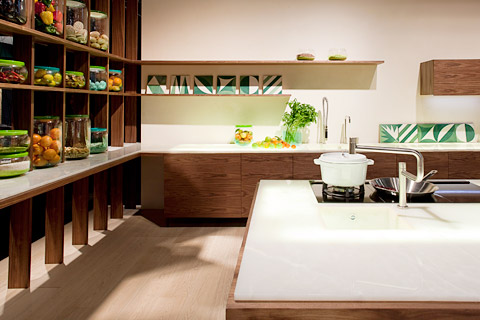 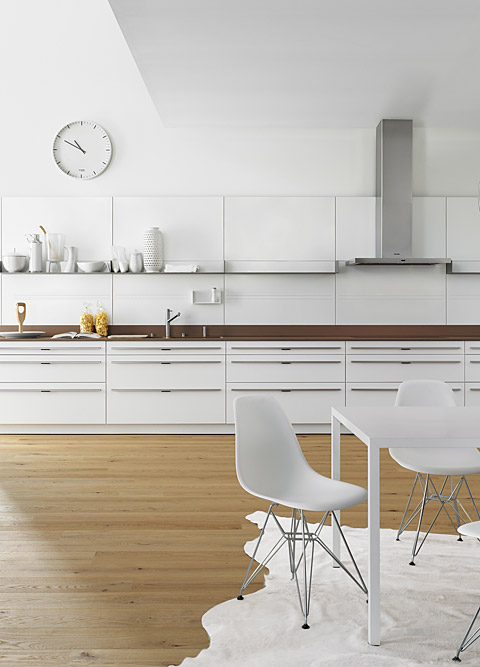 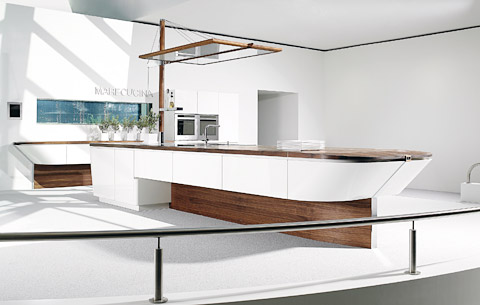 Alno presented its design study “marecucina” that takes its cue from existing product lines and, as it says in the press release, bridges “vacation time and everyday life”. 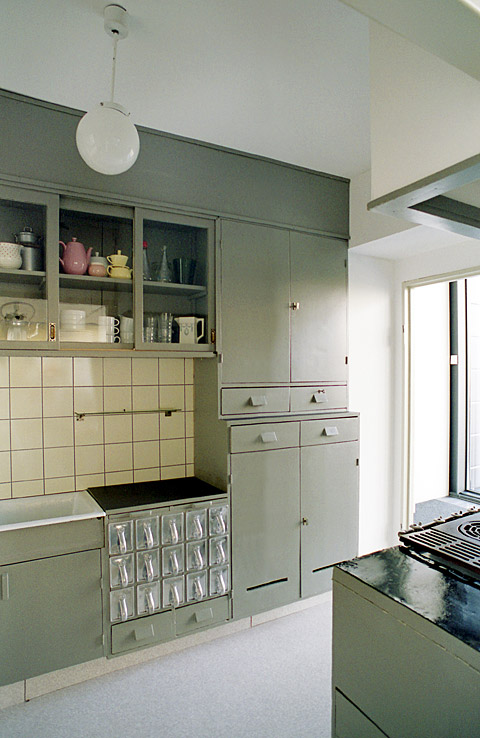 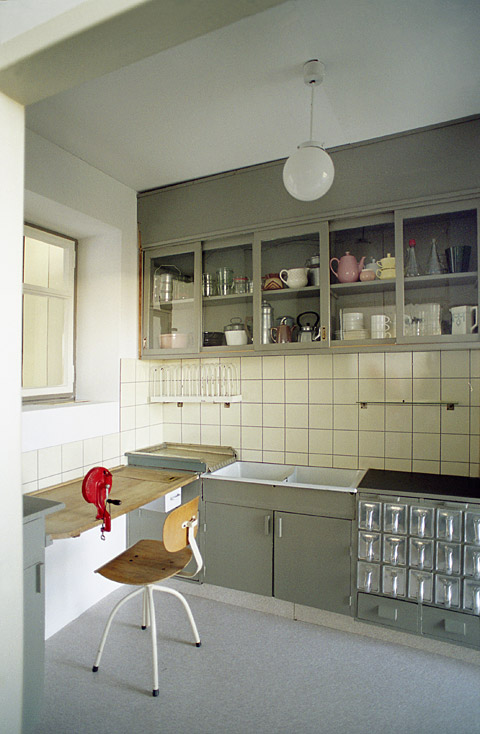 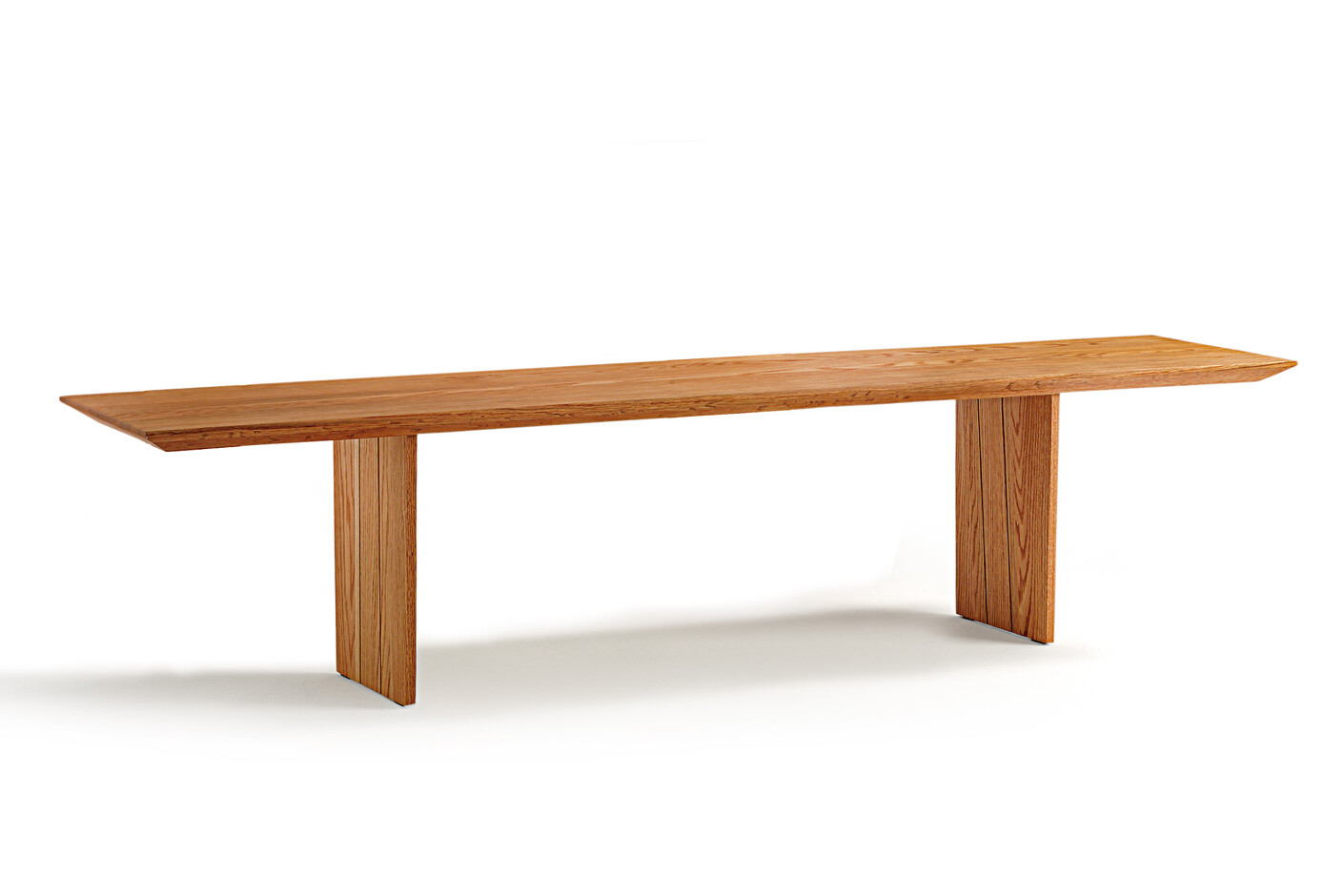