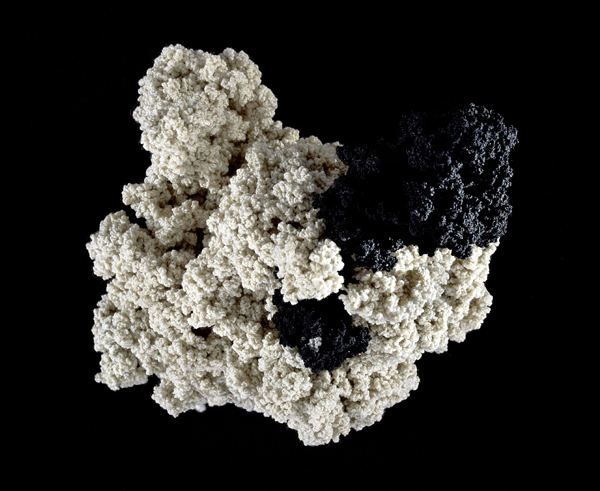 Knots. Seamen's knots, ornamental knots, writing in knots. Hyperbolic geometry. Knotting knots as a ritual. The knot, especially the inextricable, as the symbol for the confused, interwoven, mixed-up and awfully tangled world, out of which perhaps only Gospel truth or Buddha's teachings can lead us. I love and I hate. Knotted feelings. Nodal points. Linked life-lines. Knots as a symbol of bondage, of constraint, of arrest and of restricted freedom. The thread of human destiny. The thread of life, the thread of death. Man's cry for help: "I am the knot!" But also the prospect of salvation: belief, Mary, the Evangelists or meditation as a way of solving the knots. Jens Risch's piece of silk thread: a lump of time. But time, so the artist's knot seems to say, does not solve problems, it is the problem.

For his first silk piece, from October 2000 to November 2004 Jens Risch strung knot after knot together until it was impossible to add any more knots. At the end of March 2003, the silk thread, which was initially one kilometer long, was completely knotted through. The knotted cord then measured 233 meters. Starting once again, Risch worked on re-knotting this piece, and by September 2004 the cord had thus shortened to only 58 meters. After the third round of knots, the thread was down to 12.3 meters, after the fourth it was 3.35 meters and after the fifth round just under one meter long. The subsequent sixth round was the last and led to the known result, an object with the approximate dimensions of 9 x 8 x 6 centimeters. Museum für Moderne Kunst in Frankfurt/Main acquired this, Risch's first silk sculpture and from February 8 to September 27, 2008exhibited it in the center of the room together with the "Date Paintings" by On Kawara.

All this would seem rather straightforward. But does this information, which the artist provided, really get us any further? Does it help us answer the question how we can approach and grasp Jens Risch's work, which is undoubtedly fascinating? Do we even need to have heard an account of how it was created? Does not the object instead have a real impact only where we start to see more than the visualization of its genesis? Is the unwinding of its development process, which the artist considers important, supposed to induce us to use the work as a vehicle and to imagine protagonist behind this silk sculpture meditating on the value of his work in particular and the division of labor in society today in general? Or would it make more sense to disregard the artist entirely and to draw on the proven method of association in order to weave as closely meshed a web of analogies as possible (tuber, coral, sponge), i.e. of images from the world of animals, minerals, and plants?

Anthill effect
If, as has been claimed time and again, it is true that the ideal way of approaching an artwork really is to specify what we see, how can we then describe Jens Risch's object? What is the surface, what the overall shape? Should we look at the object as a whole and neglect the details? Or is it better to focus on one section or individual knots? Is the task (to put it simply) to simultaneously perceive detail and the work as a whole? So is it about capturing one particular moment, a moment in which the one melds with the other, as in poetry? This would be to end with the anthill effect. As in the case of the anthill it is obvious that we cannot simultaneously observe the individual insect and the flows of movement. It is said that we could only succeed in observing both (i.e., the flow of motion and the little creatures) at once after approximately three to four days of intense mediation. Whatever we may think about such a contemplative approach, perhaps it does indeed broaden our horizon imaginatively if on occasion we simply step out of the rational frame of thinking. Maybe it is a condition of artistic insight itself to remain concealed, to conceal itself, and always seem mysterious to us. Perhaps in the present case the form of truth is actually more to be found if we understand the object as something poetic, i.e. not literally, but symbolically.

In any case, Jens Risch's "silk piece" is above all a visual object that appeals to the sense and makes us think, an artwork and as such not a reflection of another (e. g., political or economical) domain and can thus lay claim to embody the one and only true meaning. Thus, this work is likewise never merely the silent reflection of something else that represents "true action" nor the sublimation of something else that would be the "true" act. In the sphere of art, the creative spirit embodies life itself, it is the true revolutionary power that changes the world. "Here is the turning point, hic Rhodus, hic salta; following Hegel this has to be translated as 'Here is the rose, dance thou here'. To start dancing; who can differentiate between the dancer and the dance; it is the impossible unity and amalgamation of all things." (Norman O. Brown, Love's Body. Wider die Trennung von Geist und Körper, Wort und Tat, Rede und Schweigen, Munich, 1967, p. 247). Thus, the task of the observer may be the simultaneous observation of the individual part and the whole after all.

While Jens Risch ties his knots, On Kawara continues to paint his "Date Paintings", a series he began working on in 1966. Just like the continuously successive knots - Risch is currently working on knot number III - they trigger processes that are hard to fathom. In both cases, disappearance itself appears constantly as having disappeared. "It does not appear as that which has disappeared, but only as the fact that it has disappeared. This enables the work to open up to incompatibilities without being appropriated by them and thus likewise enables it to move between being and nothingness, light and dark, continuity and discontinuity, physics and metaphysics, part and whole, time and space, concentration and dissolution, day and night, chance and inevitability, the finite and the infinite, will and intuition, seeing and not seeing, difference and equality, appearance and disappearance, one and many, nothingness and awareness, life and death, logic and process, silence and time, division and fusion, horizontality and verticality, idea and appearance, axiom and contradiction, minimum and maximum." (Henning Weidemann, On Kawara, Ostfildern, 1994, p. 57)

And, paraphrasing a comment on music by Friedrich Nietzsche, for Jens Risch, the last knot is not the goal. Yet, it is also true that he has not achieved his goal until the very last knot has not been tied.

smallspace gallery (Schliemanstrasse 4, Berlin, www.smallspacegallery.com) will show Seidenstück III (silk piece III) by Jens Risch until May 9. The artist worked 1,395 hours on this piece, his latest work, and knotted a 900-meter-long silk thread (800 meters white, 100 meters black) until it was impossible to add any more knots. It is his first work in two colors. Just as in the case pieces I and II, Risch has continued to eschew modern principles of productivity and optimization such as have increasingly found their way into the large workshops of important artists.

As of May 14, 2010 the exhibition "As soon as possible. Time and Social Acceleration" at Palozzo Strozzi in Florence will feature all three silk thread sculptures.

For further information, please visit the artist's website at www.jensrisch.de