Friendships are one of those things. In the digital age, there’s the dilemma of having countless virtual friends, whereby you often don’t know how many of them are actually real, or how real they are. There are various aspects that initiate such relationships: For example, what does outside pressure do to a friendship, for example if you work in the same field and in this regard are rivals? What can friends do for each other, what moves them? To what extent can designers or artists even be friends and bring such a relationship to bear in a project?

Tulga Beyerle, Director of Kunstgewerbemuseum at Schloss Pillnitz has for some time concerned herself with these and similar questions: “I’ve spent at least two years discussing friendship in design with my friend Maria Cristina Didero,” she says, “and we wondered how the topic could be given a new lease of life. In April this year, during the Salone in Milan, the entire project then acquired a definite shape.”

The two curator invited seven designers to take part, and created three “teams of friends” on that basis: Bethan Laura Wood and Philippe Malouin, Tomás Alonso and Mathias Hahn as well as Richard Hutten, Michael Young and Jerszy Seymour. It is fascinating not just that the friendships have in part existed for decades between the designers in question, but also that they bring together different nationalities as if this were an obvious thing to do. “We gave the three crews three different tasks,” Tulga Beyerle explains. “Wood and Malouin were expected to realize a design proposal for each other; Alonso and Hahn were expected to make a gift for each other, while Hutten, Young and Seymour were asked to design a product together.” 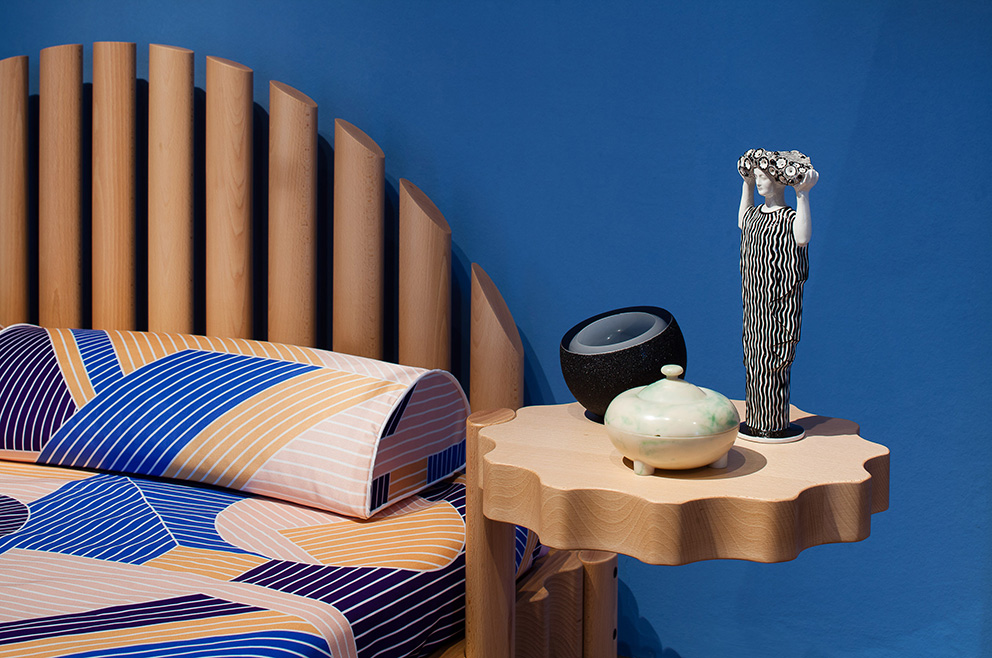 A bed by Bethan Laura Wood for Philippe Malouin: Inspired by the birchwood “The Ace Stool” which the Canadian designer created for a hotel.
Photo Tomáš Souček, © Staatliche Kunstsammlung Dresden

The results are as original as they are different, rendering the relationships between the seven designers manifest in the pieces commissioned. Brit Bethan Laura Wood and Canadian Philippe Malouin decided to design what is the most everyday and also most intimate object for each other – a bed. Wood drew her inspiration from her friend’s design for a stool and the bed’s elements and details thus rely on various shapes Malouin uses in his seating. Malouin for his part went for the fashionable “look” that Wood prefers, as she is always clad in stridently colorful garb: His design features a sequence of any number of balls, with the colors changing as they run from one side to the other, or rather from the head to the foot.

The trio of Hutten, Young and Seymour chose to develop a table together, because, so Richard Hutten, “that is exactly the piece of furniture where friends sit down together.” The marble table, which was then manufactured in Belgium, consists of two base frames, one with rough/broken angle edges by Seymour and the other an elegant-symmetrical one by Young, not to mention a massive top. The latter was designed by Hutten and id decorated by various ornaments, for example the pattern of a seed pod magnified to gigantic proportions. Two of the inserts made of colored marble Hutten had her companions design, so that they left their mark not just beneath the table top, but on it, too. 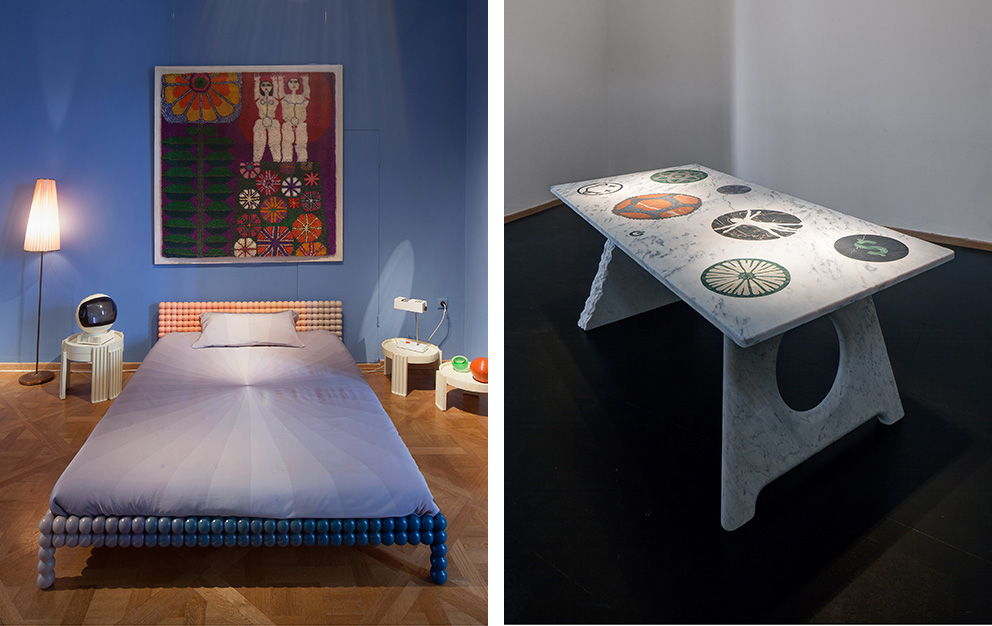 On the l.: Colored beads for Bethan Laura Wood – this is what Philippe Malouin imagined the bed for his British colleague should look like. On the r.: A table combining three different signature styles – Michael Young, Jerszy Seymour and Richard Hutten blended their styles in this marble table. Photos Tomáš Souček, © Staatliche Kunstsammlung Dresden

Tomás Alonso and Mathias Hahn found a very original take on the idea of a gift to be made for each other, as what could be more personal in our packed everyday lives than to give each other “time”? The Spaniard and the German, who both live in London, went on a trip for seven days, which saw them travel by Mini, a British design icon if there ever was one, from the British capital to Pillnitz. During the trip they visited workshops both sides of the English Channel and ended up, among other things, with a car full of objects by yacht-builders, shoemakers, glass blowers, knife makers, bicycle makers and switch producers. In the process the two engaged in an in-depth discussion of artisanal workmanship, materials, manufacturing techniques and design. Shortly before the trip ended they visited Stiftung Bauhaus in Dessau, a place neither of them yet knew but which they had for years told each other they would love to see. “We had all manner of experiences along the way,” recalls Tomás Alonso. “Each day we visited various production outlets. Not that we were always welcome, and some had really no idea what it is we wanted. But we got an in-depth view of in part very old manufacturing processes, and that was really special for both Mathias and myself.” Incidentally, very shortly after the Brexit the two global players noticed something interesting. On the road in the Mini and with British license plates some passers-by showed them the finger. A small EU-sticker on the back of the car was meant to suggest ta least visual ties, or perhaps even friendship?

The exhibition in the Pillnitz Wasserpalais is small, and beautiful. All the exhibits encourage you to ponder things, to think about shared qualities and differences, about how team members complement each other – and about the bond of friendship. It’s a call to do more things together for all the rivalry, and plenty of food for thought. 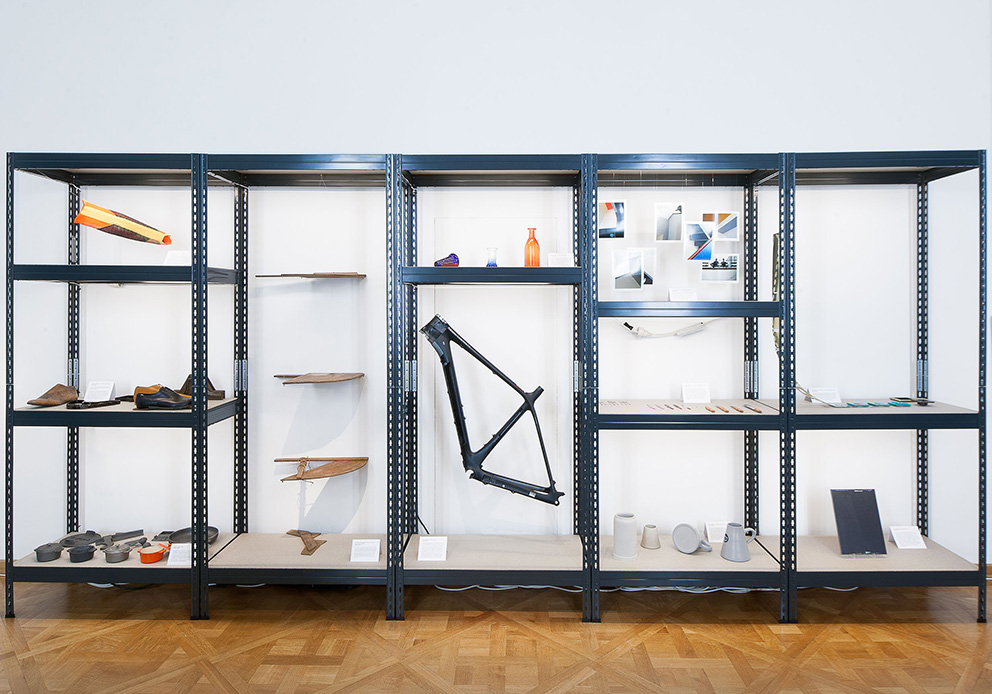 Objects found on a journey together: Tomás Alonso and Mathias Hahn gave each other time and a tour of artisanal workshops, bringing back objects from many of them.
Photo Tomáš Souček, © Staatliche Kunstsammlung Dresden. 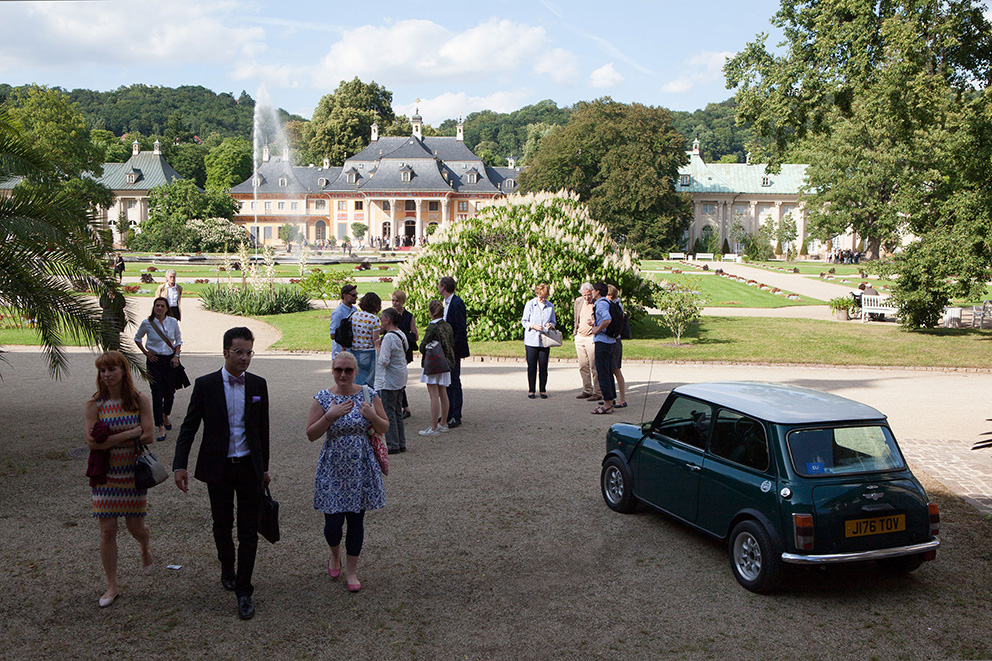 German-British idyll: The old Mini in the park outside Schloss Pillnitz, where you will find the exhibition “Friends + Design” in the Wasserpalais.
Photo Tomáš Souček, © Staatliche Kunstsammlung Dresden
Advertisement