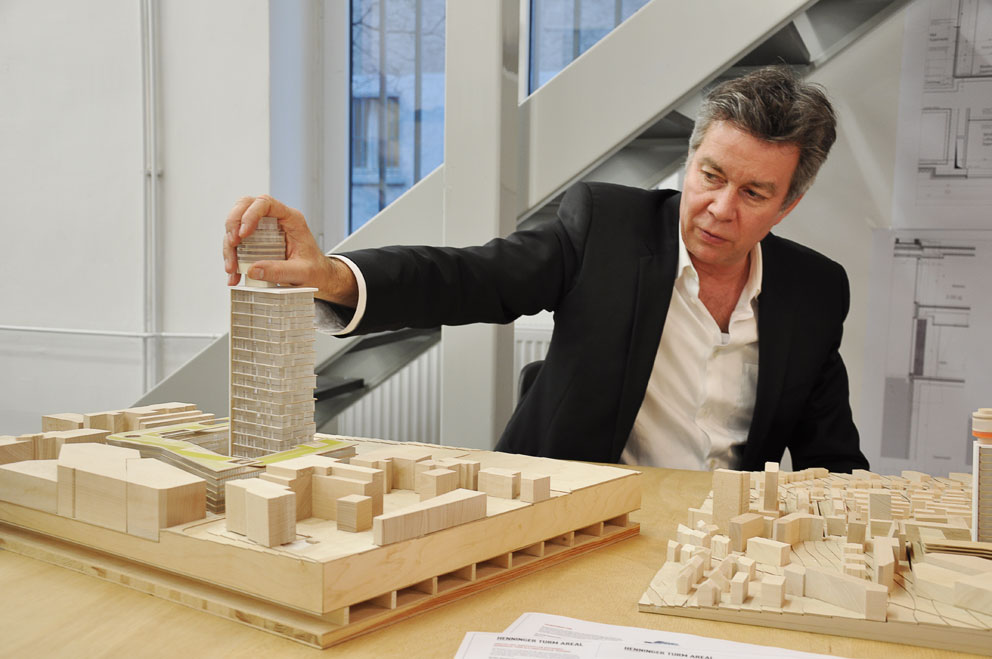 The barrel stays! Florian Schlüter next to the model for the new Henninger Turm. Photo © Robert Volhard, Stylepark

The Henninger Turm is one of Frankfurt’s major landmarks. Which makes it all the more of a challenge to redesign it. In the second part of the interview that Thomas Wagner conducted with Claudia Meixner and Florian Schlüter, the two architects talk about special aspects of the competition, dealing with memories and modernizing an urban landmark.

Thomas Wagner: We’ve already talked about how you approach residential high-rise projects. Now let’s turn to Henninger Turm. How did you proceed there?

Claudia Meixner: Basically, no differently than we did with the residential tower on the Europaallee. We started by creating a context model. We then inserted various design approaches into it, looked at them, discussed them, left the model standing, so that our impressions could settle, worked on the functional structures, and played things through again until a solution emerged.

Were there special aspects in the design brief for the Henninger Turm? Did the highly conspicuous barrel on the top have to be kept at all costs, for example?

Claudia Meixner: No. The competition brief called for entrants to propose two solutions. One was to be a conversion of the existing building, while the second was to evolve proposals for a completely new design. Based on what was proposed the jury would then be able to decide whether to favor a conversion or a new building. What we really liked about the competition was that there was an interim workshop. In other words, it was a collaborative process that provided an opportunity to present an interim design and get feedback from the jury, and thus ascertain whether you are on the right track or not. I must say that such a process really focuses you. In fact, we started out with the existing building. That was the very first thing. Then we explored widely diverging design ideas using working models. We tried to toy around with as wide a spectrum as possible, ranging from the completely austere to amorphous, free geometries.

Can you describe the methodology more precisely?

Florian Schlüter: Well, for example we developed an amorphous model that swings upward out of a base and looks down onto the city. You have to realize that when you drive up Heinerweg to Henninger Turm you can’t help but feel what a strong presence the building has. But we also discussed other approaches. For example, cutting an outline of the original building as a negative in the new structure. We simply tried out many approaches, but then came to the realization that we could not really imagine simply building some chic tower or other on the site where this landmark had stood. From then on we knew: We wanted to do something or other with the existing Henninger Turm, quite regardless of whether it was a conversion or a new build.
Another step was to establish carefully whether the existing substance could actually be put to use. In fact, it proved unrealistic to try and use it, and as it is not a listed building there was no compelling reason to do so either. What we did begin to appreciate, though, was that the tower is not so much a historical monument in terms of architecture, but rather an emotional monument for this city. So we came to the conclusion that Henninger Turm ought to be preserved as an image but in a new form. And it was that idea which won over the jury. 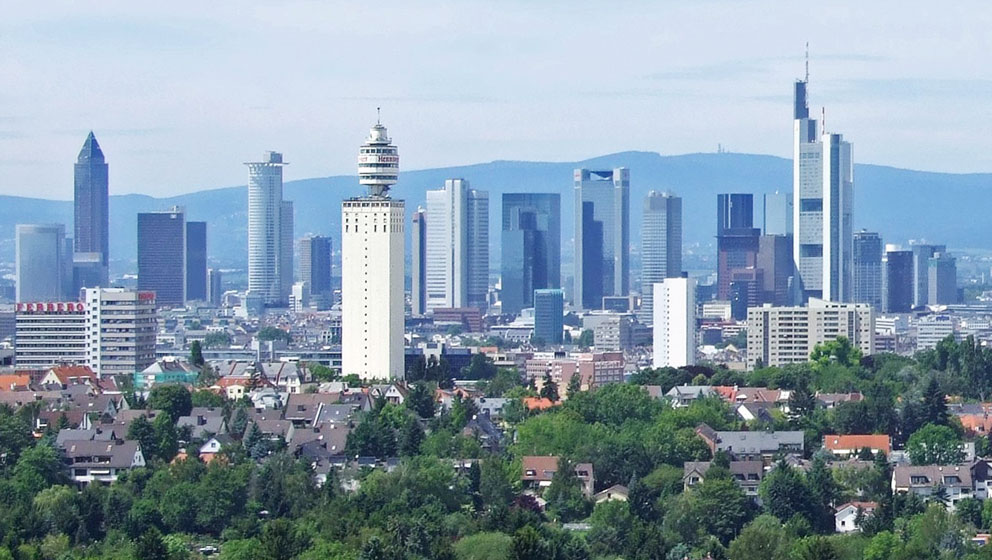 Beer not Financial Institutes embossed the skyline of Frankfurt Main: the old "Henninger Turm" was a grain silo of the Henninger Bräu AG and until 1974 with 119.5 meters overall height the tallest building in the city. Photo © Wikipedia, rupp.de

The Tower became a landmark, didn’t it, before many other high-rises had so emphatically shaped Frankfurt’s skyline?

Claudia Meixner: Yes, in that sense the Henninger Turm is like other buildings such as the Kleinmarkthalle, or the neon sign on the Eschersheimer Turm advertising the “Detektiv-Tudor” private investigators. Those two examples also shape the city’s character, are indispensible parts of the cityscape, and are invaluable, albeit not in terms of architectural history or important edifices but instead as the living memories of the city.

Previously, Frankfurt and the Henninger Turm just went together, in the same way that now when you see the Messeturm you immediately say: That is Frankfurt! So you want to preserve the tower’s function in the memory of the city, but not its architectural substance?

Claudia Meixner: Yes. When we were in the middle of the planning phase, I remember coming in to land at Frankfurt airport. There was a couple from South Germany seated behind me, and as we approached the woman looked out of the window and said: “Ah, we’re in Frankfurt, there’s the Henninger Turm.” Her remark delighted me. And we used this insight in trying to keep alive the memory of this landmark, but simultaneously we sought to design a contemporary residential tower that underscores the fact that the high-rise is no longer a grain silo with a barrel on the top of it. We wanted to preserve what’s characteristic about the building, above all its shaft silhouette and the “head” that is slightly off center, which looks down from Sachsenhäuser Berg onto Frankfurt. We then filled out the silhouette with differentiated landscapes.

Florian Schlüter: As we did with the residential tower on the Europaallee we explored questions such as: How do you get from the inside to the outside? What outdoor and transitional spaces are there? We were keen to create complex loggia and terrace areas, which permit residents to enjoy the sensory experience of these specially exposed apartments, particularly as the tower is a standalone that practically has the urban landscape at its feet. Naturally, in this high-caliber residential tower there are attractive general areas, such as a pleasant lobby and a concierge service. In addition, directly adjacent to the tower there is a plinth that is home to retail stores, eateries and fitness zones, and offers residents additional amenities. Naturally, what really makes the whole thing so special is the landmark effect of the Henninger Turm as a unique address.

Can you tell us something about the apartments it will contain?

Claudia Meixner: Needless to say, there are specific modules and apartment sizes, but they can also be combined to suit personal needs. In principle, it would not be a problem if someone wanted to occupy an entire floor or connect several floors to one another. 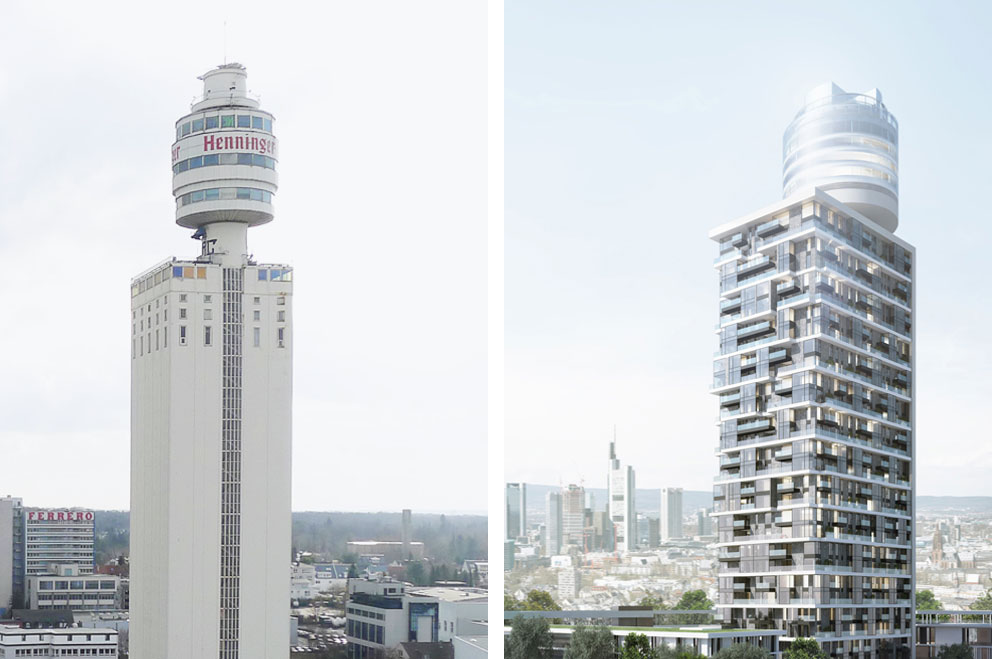 And what is located in the new “barrel” that tops the building?

Florian Schlüter: In the “head” or “barrel” there are apartments, a viewing platform and a new restaurant.

Talking of barrels. Did you also give some thought to the question of doing something like retro-architecture? Is redesigning the tower possibly a similar task to redesign in the automobile industry, say in the design of the new Mini?

Florian Schlüter: Yes we did give some thought to it. After all, Henninger Turm is a much-respected building, so you are practically taking an oath of loyalty to things. You have to lay your cards on the table, make a decision. Of course, you might also have some reservations. We were the office in the competition, which explored the image of the old tower most deeply. But ultimately we never felt that you could not do it. The new Mini is also a success, it also takes up elements of the original and transforms them – though such comparisons are always misleading. We asked ourselves the question: How can you remind people of something that existed and yet produce a fresh version? We asked ourselves the same question when converting the Dornbuschkirche, where we broke off part of the church. Then we recharged the remainder of the church with a spatial footprint consisting of the broken-off elements. With the Wohlfahrt house we also took a nice weekend house – a small old home with an interesting typology and transformed, converted and built over it. In such projects it’s decisive that you find a solution in which the memory of the old is incorporated into the new, the familiar and customary continue to exist as part of the new.

Is it above all the differences in the relationship between old and new, which are architecturally exciting?

Florian Schlüter: Naturally this incorporation of the old into the new is another creative topic alongside the thematic aspect. Does the new predominate or does the old thrust itself into the foreground? Is the process directly visible or does it tend to disappear subtly into a new design? Do I perceive the old readily, or does it remain in the background? Does it emerge brusquely or does it merge elegantly into the new design? We were always intent on creating a transformation, not paying homage to the past. That is very important.

Claudia Meixner: The search always entails a series of stages. For the residential landscapes, for example, we finally realized a version in which the clear geometry merges into a flickering structure of pixels, which distances itself more clearly from the basic cube-shape of the Henninger Turm.

Florian Schlüter: Whatever you do in such a case it is important that the whole thing fits in with the aura of the building, in which both the overall design but also the individual in details are visible. We would be happy if rather than saying: “I live on the 14th floor,” a resident of the new tower would say: “I live in this residential sculpture, have my own personal outdoor space in a balcony and a living situation unlike anything others have.”

Claudia Meixner: Apart from the qualities of the Henniger Turm as a symbol of identity and memory, the new building represents a contemporary, “personally-pixelated” residential tower. It is not least of all this that makes it such an attractive property.

Read in Part 1 of the interview how the architects Claudia Meixner and Florian Schlüter approach the task of a “residential tower”, and how their buildings are an expression of their relationship to their surroundings. 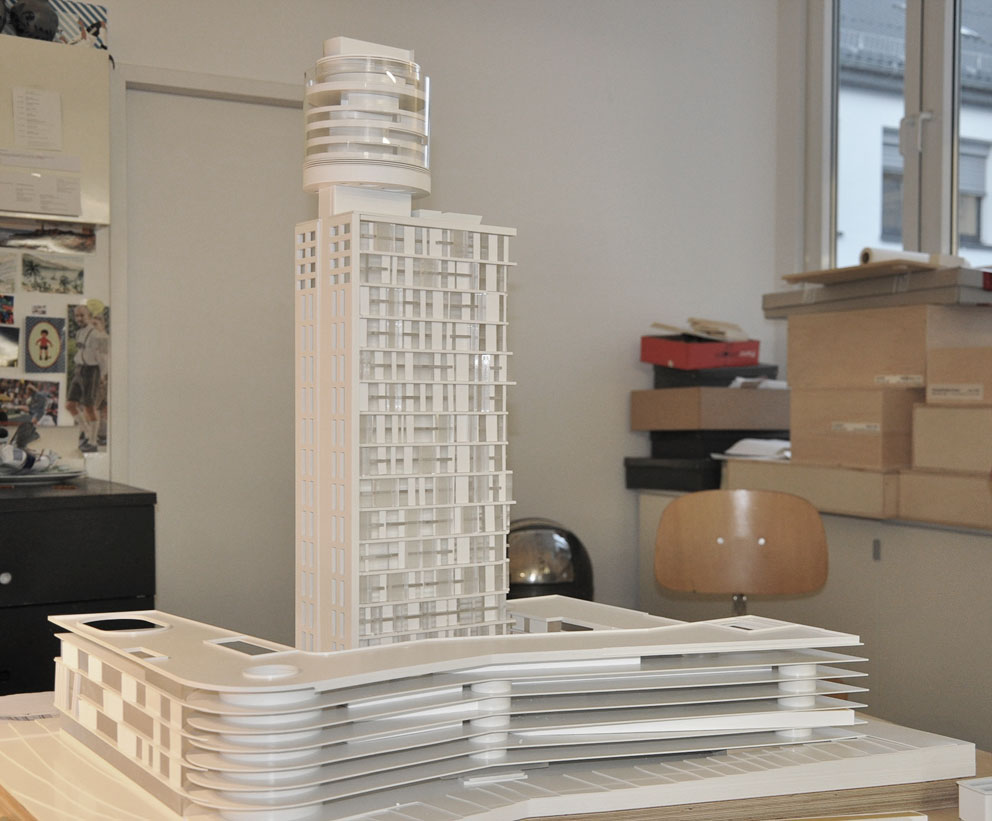 The new Henninger Turm as a model. A building with only six floors surrounds the basement of the landmark. Photo © Robert Volhard, Stylepark
Advertisement