top
The rocking chair as a phenomenon for the arcades
von Annette Tietenberg | Nov 15, 2011

The rocking chair is an item of furniture for all those who want to sit but most definitely not sit still, and this does not only apply to any one with proverbial ants in their pants. The slow back and forth, the careful oscillation has a meditative side. The rocking chair gently sets the human body in motion, giving the user a slightly blurry perspective of their surroundings, calling to life those comforting memories of being slowly rocked as a child. Once set in motion the chair moves back and forth by itself. Yet if it were to come to a sudden standstill, we would find it rather difficult to complete that slight shift in weight, that would allow us to push away from the floor with our feet and moving from the hips bring our upper body to an upright position. Thus it is rather difficult to unambiguously categorize the rocking chair: It is a chair and a cradle, an item of furniture to rest and in one to move in, all at once. When sitting the chair phases of enjoying our own passivity alternate with those where we become aware that we are still active in some way. The rocking chair is therefore, to use Walter Benjamin's term, nothing less than an phenomenon of the arcades.

This may well be due to the period in which it was invented. The rocking chair was mentioned in the Oxford English Dictionary for the first time in 1787 and evidence confirms that it was available to buy in furniture catalogs as of 1789; making it a product of the Enlightenment. In those places where man should be governed by reason – in schools, universities, administrative buildings, parliament etc. – chairs and benches were used to sedate the body, repressing instincts and senses, distracting from pure thought alone. In the light of such a historical and cultural background, the rocking chair holds a rather subversive potential, as though whispering: Look, even though it is associated with the enhancement of our intellectual ability, sitting does not necessarily have to entail a debasement of comfort. Our inclination to spend time in these chairs lost in a book or lost in reflection, is evidenced by the number of intellectual greats who were gladly photographed in their rocking chairs – Abraham Lincoln, Mark Twain and Pablo Picasso, to name a few. It appears that it is less the disciplined, ambitious brain work behind a desk that they have to thank for their eye-opening insights but rather this stationary rocking out in the fresh air, an activity so strongly associated with pleasure. Today, we can even explain this state of happiness in scientific terms. Namely, the rocking motion causes our bodies to release serotonin. So here too the rocking chair proves to be a phenomenon for the arcades: as a chair, it encourages us to think while seated; as a rocker it reminds us that our thoughts actually arise out of the sensory experience of our whole body. Briefly speaking, it is an abundantly inconsistent device that while aiding our mind in its search for clarity also reminds us that the mind is contained in a physical body.

The invention of its earliest form is attributed to the Shakers. It was at the end of the 18th century that this American society of believers began to use "rockers" in their sparsely furnished homes. As was the case with all the furniture they produced, these rocking chairs adhered to the imperatives of "modest simplicity" and – to use today's buzzword – sustainability. "Any unnecessary ornamentation" was forbidden. The rocking chairs were no different to the other chairs made by the shakers; they were produced in series, their frames made from local wood with seats of woven straw or textiles, they stood out in terms of their clarity and simplicity and were a masterful display of structural workmanship. There is only one difference, and a rather decisive one at that: The chair's legs were not set on the floor but attached to two crescent-shaped runners.

60 years later, Michael Thonet would prove that these runners could function as more than a simple addition to the conventional chair but that they could be interwoven into the object's integral structure, creating a new ornamental element. Thonet's "Rocking Chair No.1", whose side view pays homage to the curve of the hand-drawn line, was first produced in 1860 in the Thonet workshop in Moravian Koritshan and was the first chair to be made using the bentwood technique. The now much sought-after collector's piece was re-released in 2009, whereby Thonet produced just 25 copies in Frankenberg following the old family tradition.

Even today, designers love to set themselves the challenge of designing a rocking chair. This seesawing object is after all much more committed to sensuality than the majority of its counterparts. Furthermore it provides a fantastic basis for experimentation, for it is neither a necessary part of the working world nor an awe-inspiring object of prestige. Its popularity is further enhanced by the fact that, in contrast to office chairs, armchairs or sofas, rocking chairs are produced in much smaller numbers, meaning that one does not have to worry so much about sales markets but can put one's stamp on the luxury segment of the market, the home of so-called designer pieces, because a rocking chair may be many things – but there is one thing that it is not, truly necessary.

As an exemplary experimental field for studies into perception theory, Friedrich Kiesler discovered the rocking chair as early as 1942 when – as part of his "correalist" research – he attempted to find out which forces are at work when there is interaction between an item of furniture and its user. Kiesler designed the "Rocker", a beechwood construction, covered in linoleum. Although its amorphous shape may not lead one to think so, the "Rocker" is based on a geometric construction formula. Circles, inscribed into a trapezoid, define the curved outline of the chair's frame. What makes the "Rocker" so remarkable: It unites the seat, backrest and runners into a single entity and is not compiled of various separate elements. According to Kiesler, it is not only the natural, flowing form that has a positive effect on the human psyche but the experience of becoming one with a coherent symbiosis of function, construction and material. For, in Kiesler's own opinion: "When we use an armchair, we take on its energy in ourselves."

In the same way as Kiesler, Charles and Ray Eames are also representative of this perception of organic design whereby the chair fits to the shape and movement of the human body – and not the other way round; as is shown by their "RAR" chair (1948). The plastic seat mounted on the runners is formed in such a way that it holds, carries and surrounds the body without imposing any kind of geometric shapes upon it. Eero Aarnio also subscribes to this idea with "Pastilli" (1967) designed as a commission piece for the Finish furniture store Asko. Eero Aarnio not only celebrates the sleekness, resilience and color-intensity inherent to plastic but its almost infinite malleability too. He does so by designing the seat, frame and legs in such a way that they merge into one another and create a bonbon-shaped oval that can sway and rock in any direction. "Pastilli" requires its user to hold their own balance and thus reactivates those senses that are usually suppressed while seated; elevating it to the status of an "object of desire" in our plastic-obsessed space age.

Relaxation, the stimulation of our senses and our joy for "disegno", all of this and more is offered by the "Dondolo Rocking Chair", which is based on the design by Italian designers Cesare Leonardi and Franca Stagi and of which no more than 15 to 20 copies were produced between 1969 and 1975. Design critics praised "Dondolo" for its "calligraphic gestures" and elegant simplicity. One is not least left awestruck by the idea's consistency, made a reality in plastic. The legend of its creation also evokes a certain charm: As told by Cesare Leonardi's daughter, the design for "Dondolo" was put to paper leisurely and effortlessly during a single evening in 1965. Those shapely lines, its hand-drawn design is clearly visible in the object's final form, particularly when viewed from a side perspective. Moreover the runners, which lend the chair its stability, repeat the line of this silhouette. Such a model of self-referentiality appears ideal, particularly for a rocking chair, encouraging the user to turn away from the distractions of the outside world and to instead concentrate on introspection. By dispensing with armrests, the user's arms and hands are unable to aid the rocking movement so that the chair is rocked by shifting one's weight in the direction of the footrest.

While "Dondolo" creates a correlation between mental relaxation and bodily tension, Denis Santachiara's "Mama" (1995) highlights yet another aspect associated with the rocking chair: a feeling of emotional security. He used the colors, the shape and even the name of his design to invoke an – imaginary – return to the maternal bosom. While Ron Arad, in his design for the "Voido" chair (2005) made by Magis, clearly harks back to Friedrich Kiesler's 'correalistic' research. He does not however use renewable raw materials, instead electing the thermoplastic polymer, Polyethylene, and in doing so opens up the possibilities for the object's production: "Voido" is made using blow molding technique.

And so, one sees that the possibilities in terms of design are near infinite: The rocking chair is simultaneously conceived as residuum, as a place of retreat and departure, as a means of regression and self-discovery, as an instrument for reflection in the creative design process, as an unconventional seating object, an object of pleasure and enjoyment. It has even proved itself to be advantageous as the image of a dusty relic from the world of our grandfathers that has now found its way back into today's trends as a wonderful piece of nostalgia, for it affords designers a welcome opportunity to take up old traditions and display their knowledge, their creative joy and ironic distance in a critical examination of historical perspectives. But designers are above all attracted by the confrontation of this arcades phenomenon that swings rhythmically back and forth. It is precisely this back and forth, this striving for a better world that is yet to come and this nostalgic longing for a better world that seemed to go lost with the end of the pre-industrial age; this is what distinguishes the rocking chair from its counterparts. It is an anachronistic vehicle and trip into the future at the same time. Where our culture otherwise searches for its salvation in progression, in the thrill of speed whether in a car, train, plane or rocket, the constant back and forth of the rocking chair promises a movement that is also stationary, an extension of our conscience, which knows no beginning and no end and thus opens up our minds to freedom.

Already published in our series on product-typologies:
› "Everything that is furniture" by Thomas Wagner
› "Do not lean back!" on stools by Nina Reetzke
› "On tranquility and comfort" on lounge chairs by Mathias Remmele
› "Foam meadow, stays fresh for longer" by Markus Frenzl
› "In Chair World" by Sandra Hofmeister
›"All the things chair can be" by Claus Richter
› "The shelf – furniture for public order" by Thomas Edelmann
› "How the armchair got its wings…" by Knuth Hornbogen
› "Pillar of society" by Thomas Edelmann

Drawing from a Shaker catalog 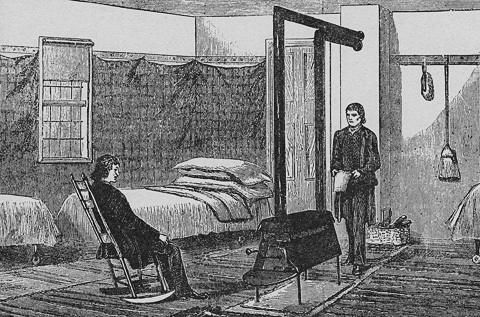 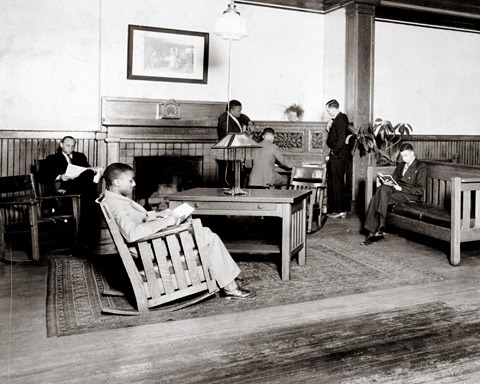 Lounge inside the Twelfth Street YMCA Building in Washington, D.C. 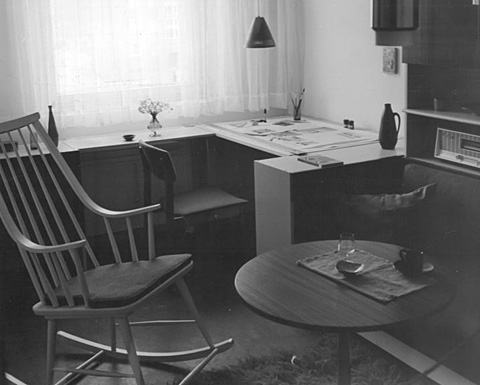 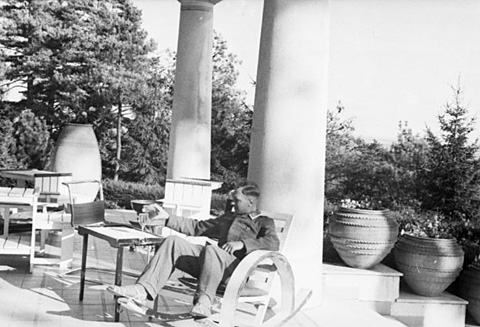 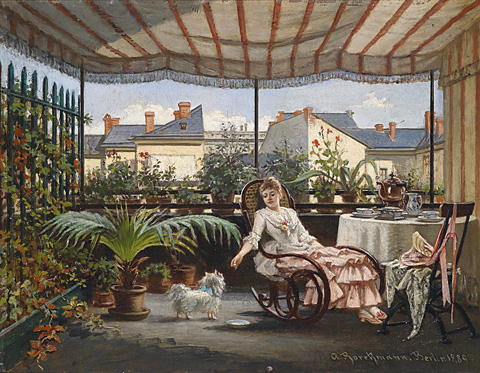 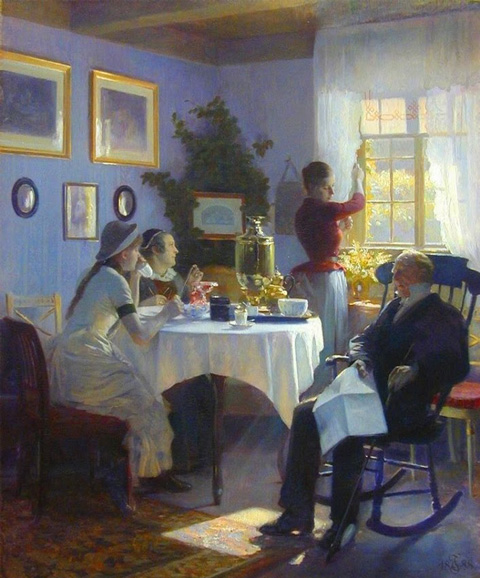 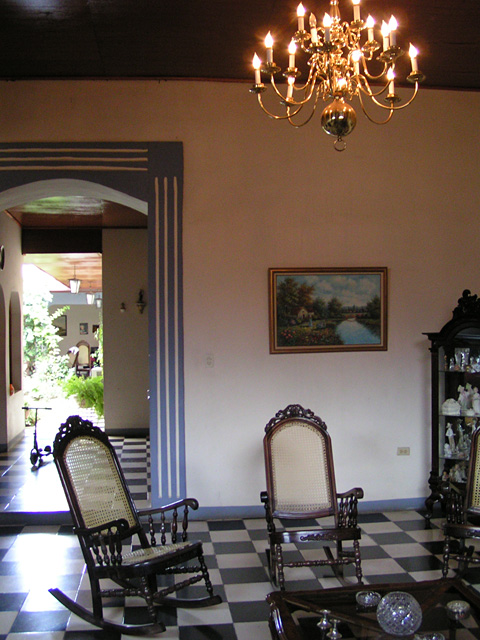 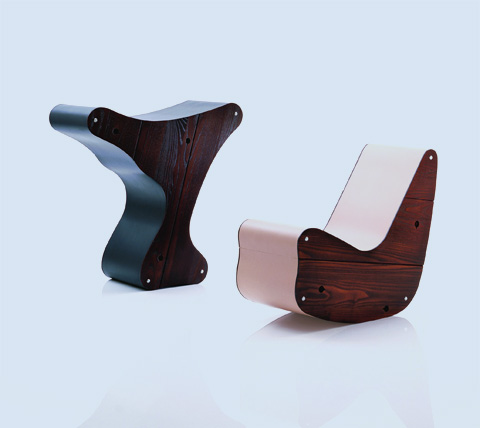 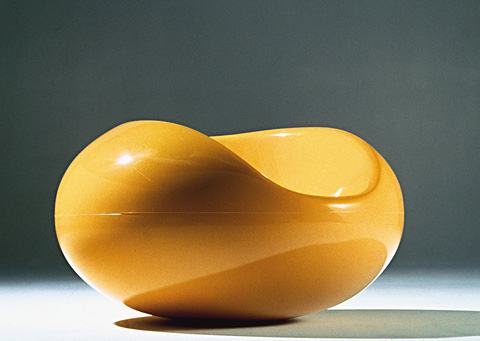 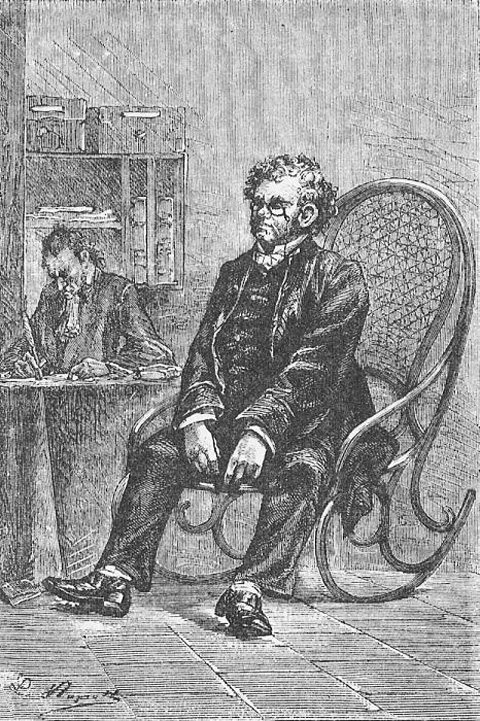 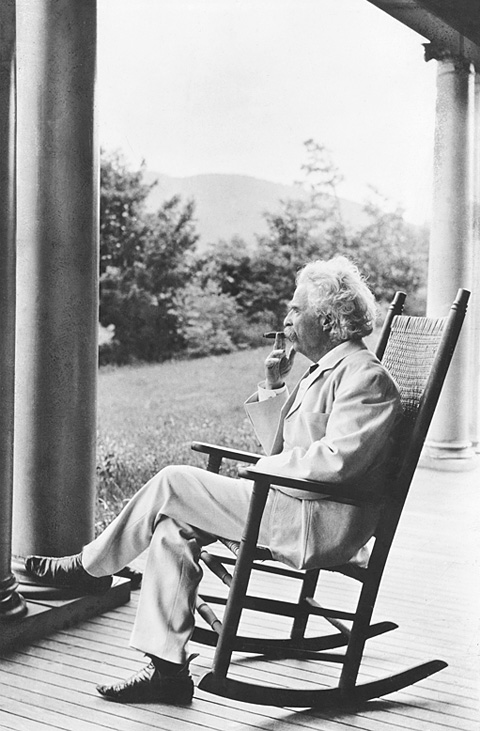 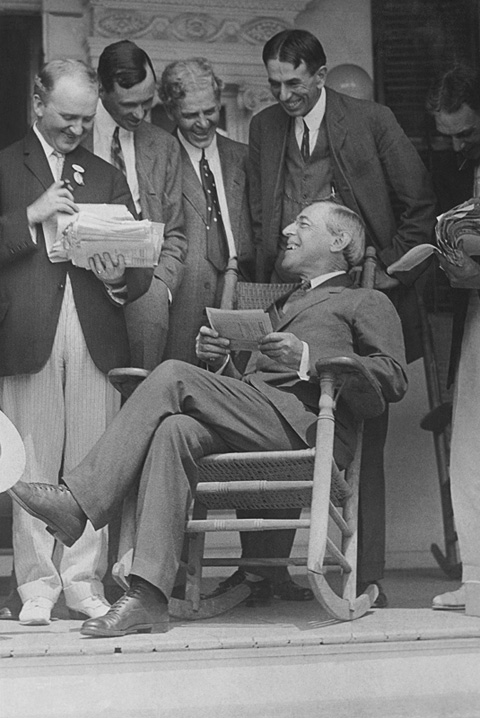 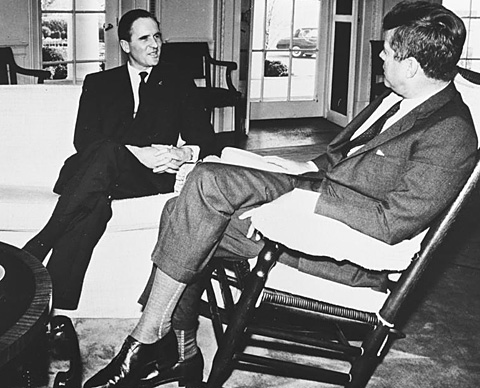 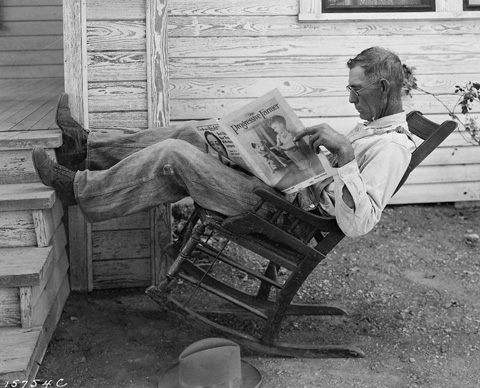 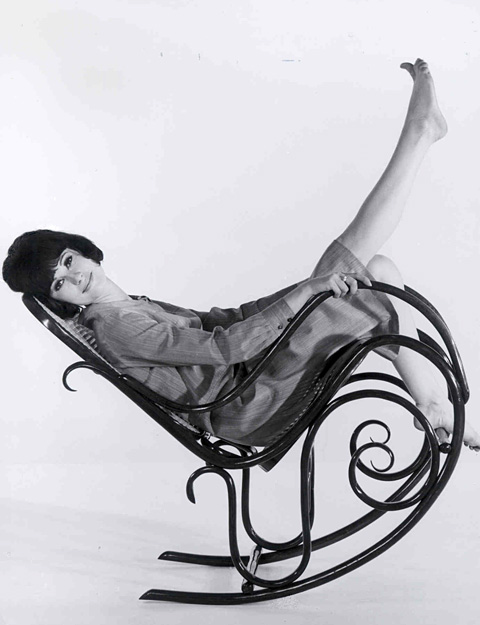 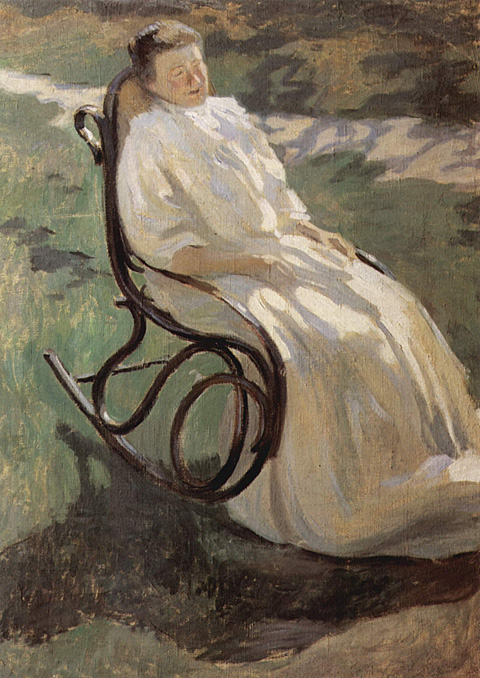 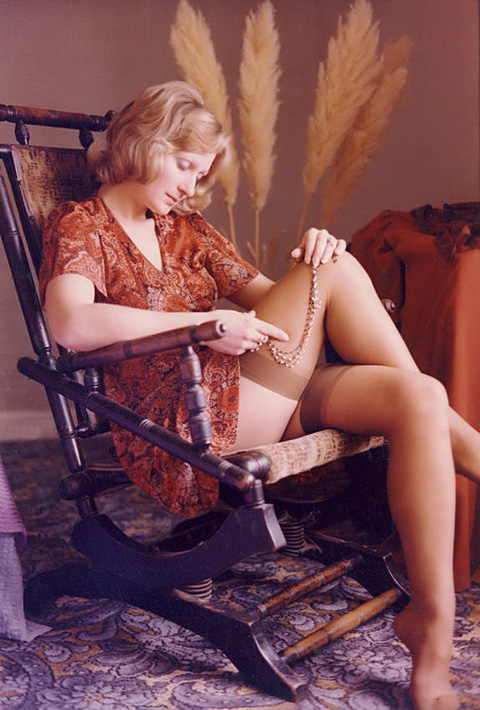 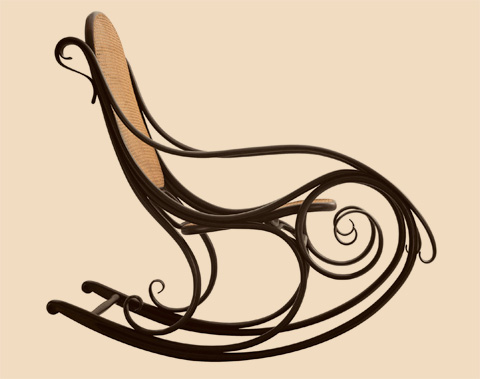 Limited reedition of the Rocking Chair “No. 1” by Thonet, photo: Thonet 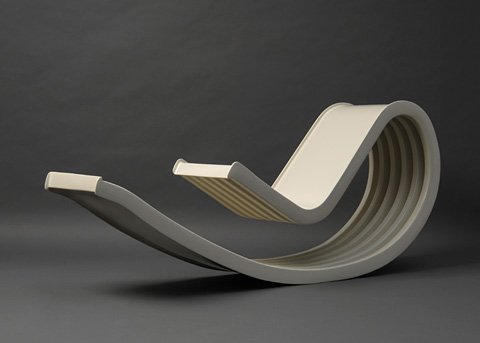 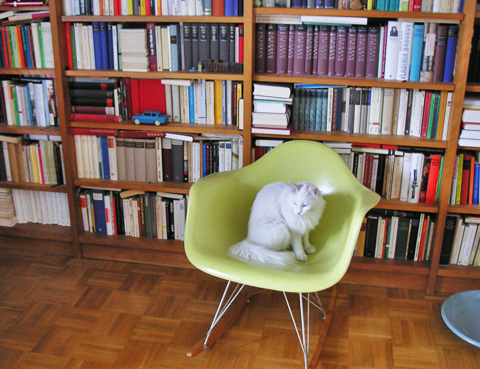 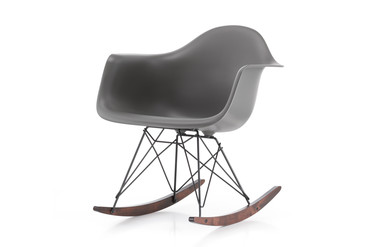 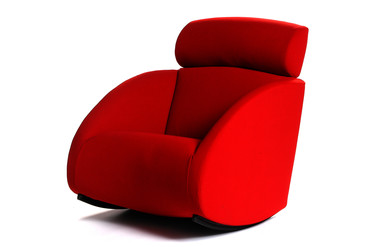 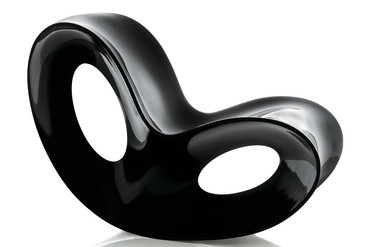 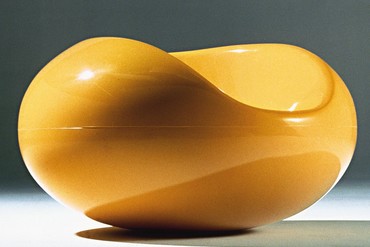 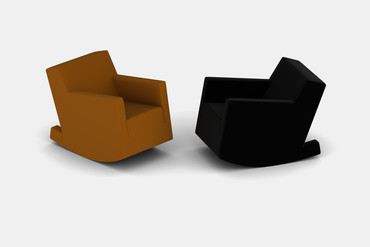 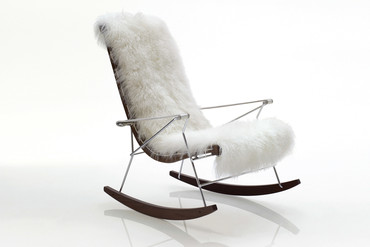 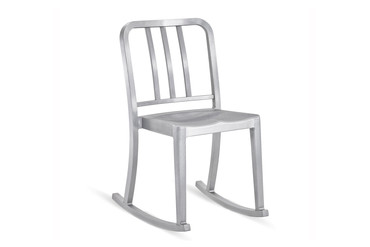 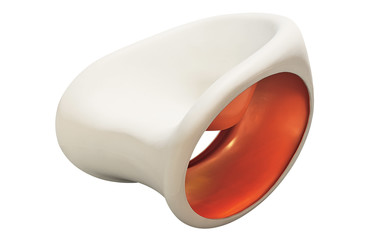 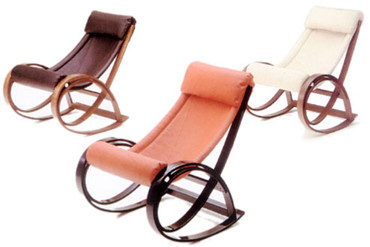