top
The secret beyond the demilitarized zone
by Sandra Hofmeister | Oct 20, 2011 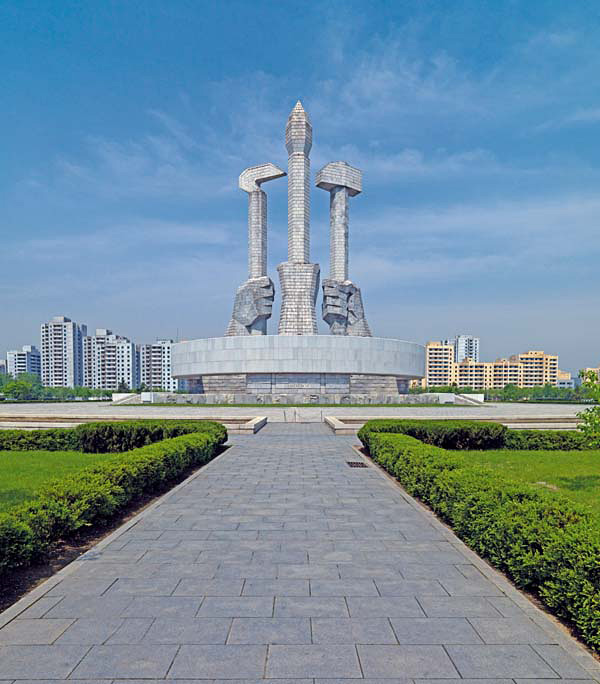 Memorial to honor the foundation of the party, photo: Meuser/DOM publishers

Looking through the keyhole can be somewhat unnerving: When the outlines and contours remain blurred, you can only guess what the objects are, but never see them completely. Then the imagination often plays its little games with the fragments of perception. It transforms the fragments behind the peephole into ghostly shadows and threatening secrets. The longer the unfamiliar is left unexplored, the more monstrous the overall puzzle becomes.

For anyone who has stood on the northern edge of South Korea's capital Seoul and let their gaze drift across the de-militarized zone this experience will seem familiar. After all the landscapes and buildings behind the border of the Democratic People's Republic of North Korea which is so strictly guarded by the military provide a vague inkling of this totally walled-off final bastion of the Cold War. But the everyday life of this world lies in an unfamiliar nowhere beyond the orchestrated images of military parades, which now and then manage to find their way into the outside world as propaganda for the empire of Kim Il-sung and his successor Kim Jong-Il.

With his Pyongyang guide Philipp Meuser may not have plumbed the depths of everyday life in North Korea's capital, yet his architecture book goes a long way toward eliminating the demonic quality of this unfamiliar country by describing its buildings and revealing the mystery of the unfamiliar – at least in small parts. Naturally, the Berlin architect was not allowed to move around freely during his visit to Pyongyang. With a guide provided by the regime, an interpreter and a driver (who took the small travel group to selected locations) the enterprise was more like a state visit than a research trip by an architecture critic. A sense of helplessness and incomprehension vis-à-vis the totalitarian state accompanied the author during his entire visit. Nonetheless, the descriptions and documents he has assembled in the travel guide intimate a vague sense of normality that is in itself quite absurd.

Standardized mass apartment blocks, monumental public buildings and propaganda mosaics line the empty streets of the metropolis that is home to millions. Large sculptures and monuments to the "Eternal President" interrupt the rhythm of the urban space and provide a sense of orientation. Meuser describes the architectural curios of Pyongyang as amounting "arguably to the best preserved open-air museum of socialist architecture". The utopian, ideological content of North Korean urban planning is exposed to be nothing more than a relic from the era of materialistic, sociological-social experiments, which have long since been deemed failures not only in the West but also in Russia. Broad streets and expansive squares along the Taejon River make Pyongyang a modernist city in which the megalomania of bygone epochs is still alive today. Well-tended residential buildings conceal the primitive sheds behind them, at night the monuments are illuminated with light shows - in an otherwise dark city.

All the buildings in North Korea's capital were built by the state. The dictatorially decreed collectivism, an economy in dire straits, and the hosting of large-scale state events with the magnificent buildings this necessitates define the urban space. Meaning the latter is tailored precisely to the state ideology and becomes its vehicle. Surprisingly, some building designs follow the international trends prevailing when they were created. In particular, the residential tower blocks and rows of mass housing do not hark back to Korean traditions but uphold the post-War utopia of Soviet housing. An enormous triumphal arch, which was built in 1982 as a memorial to the country's liberation by the Red Army from the Japanese occupying forces is integrated into the traffic flow. "Architecture as an instrument of post-colonial revenge, destined to make the powers-that-be resemble heroes for their own people," comments Philipp Meuser of the monstrous building, which was dedicated to Kim Il-sung on his 70th birthday.

The buildings in Pyongyang have a host of superlatives to offer: Ensconced on a river island the 1st of May Stadium with its aluminum roof can seat 150,000 visitors making it the largest in the world. It is the venue for the annual mass games show "Arirang" in which hundreds of children and young people present precisely choreographed gymnastic feats with military discipline, and heavy panels that are swiveled onto the tribunes in succession set the tone for over a hundred different staged pieces. Enormous building sites such as the triangular pyramid of the Ryugyong Hotel were built with the help of North American financial injections to host the 13th World Festival of Youth and Students. After being temporarily discontinued, the 300-meter-high concrete building was recently completed with help from an Egyptian telephone and banking corporation – after a construction period of more than 20 years.

"The fundamental ideas of socialist education. Hurrah!" reads the brightly colored inscription on a concrete plinth and continues on four colored fields: "Trust through loyalty, spirit of loyalty, victory of the best school class, Day of the Sun". Kim Il-sung's birthday on April 15 is celebrated with public dance events in North Korea as the "Day of the Sun". There are no advertising billboards behind the Iron Curtain. Instead, huge monuments, photos and mosaics depict Kim Il-sung in every conceivable situation. The absence of people on these images is compensated for by symbolically charged flowers, which stylize the presence of power to the apotheosis of their ruler.

Featuring clever essays by various authors, Philipp Meuser's architectural guide attempts a portrait of the land behind the Iron Curtain. It recounts the history of Pyongyang, analyzes the agitation in the urban space, and comments on excerpts from Kim Jong-Il's propaganda publication "About Architecture" from 1991. "The artistic design of the architecture becomes an ideological-intellectual guarantee for glorifying the leader's greatness," it says quite bluntly. Thanks to photos from various archives which are included in the two-volume publication alongside the official images the reader not only begins to appreciate the craziness of the propaganda but also that of reality. Yet it will not be possible to perceive the full extent of this ghostly world behind the keyhole once North Korea is a free country.

Memorial to honor the foundation of the party, photo: Meuser/DOM publishers 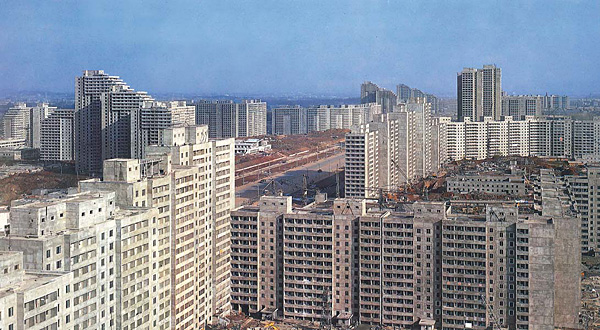 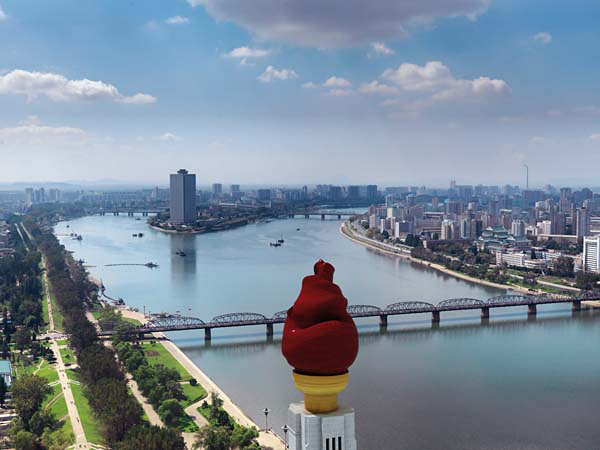 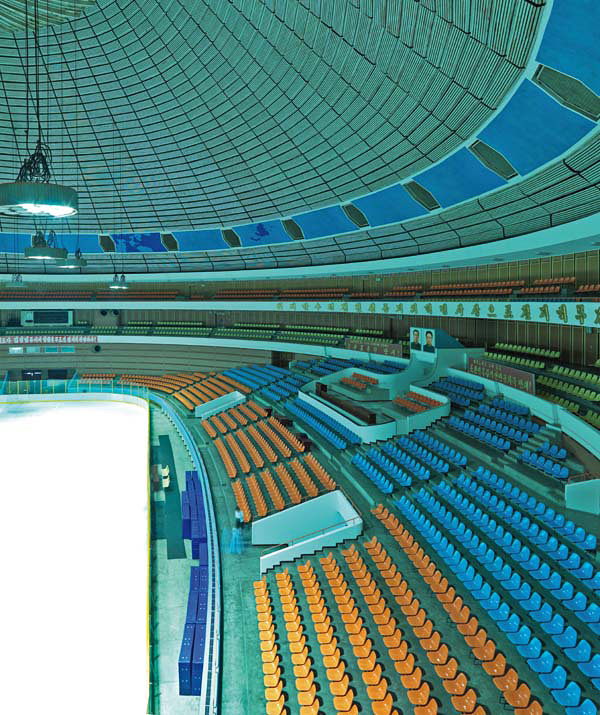 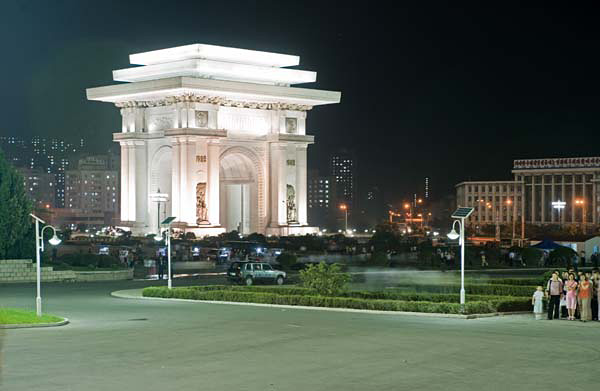 Triumphal arch to remember the Japanese occupation from 1925 to 1945, photo: Meuser/DOM publishers 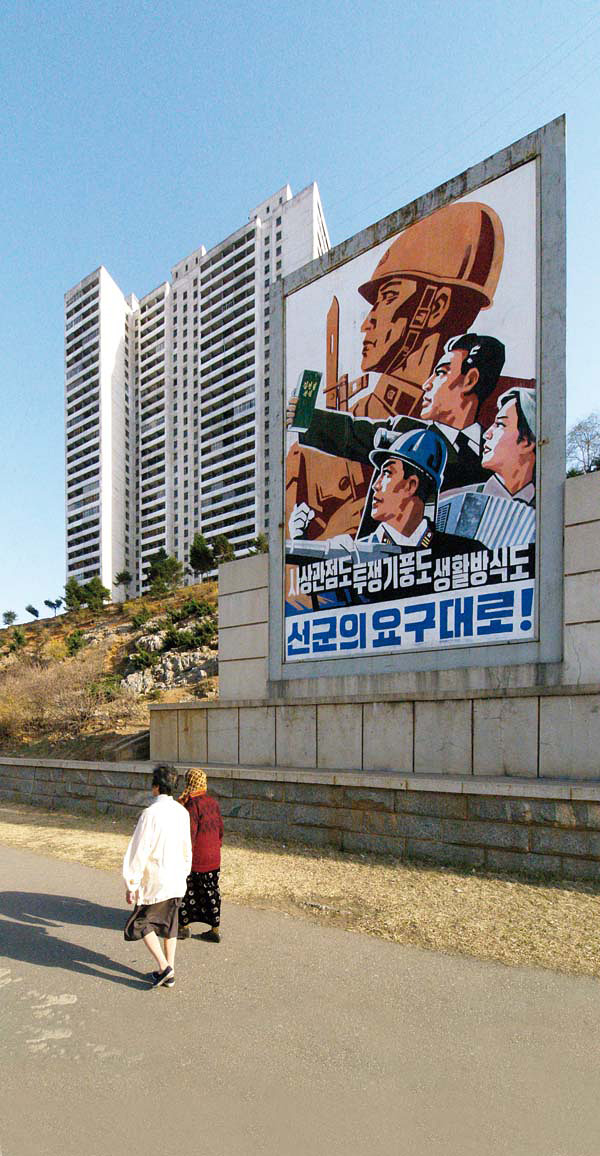 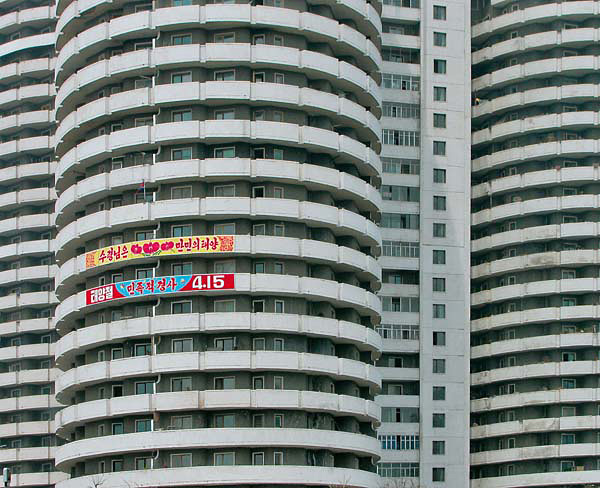 Congratulations for the birthday of Kim Il-sung at a façade of a house, photo: Meuser/DOM publishers 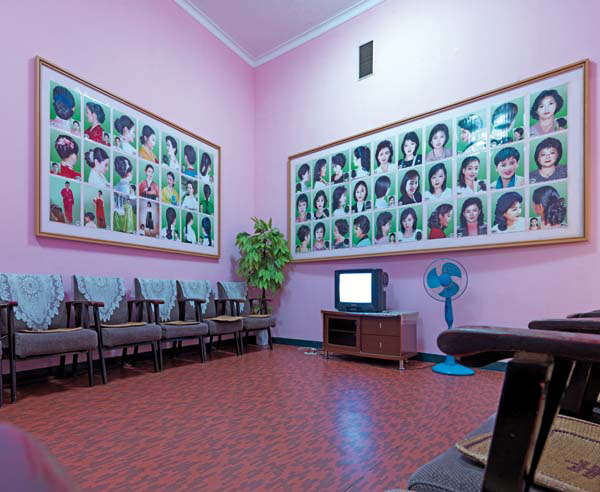 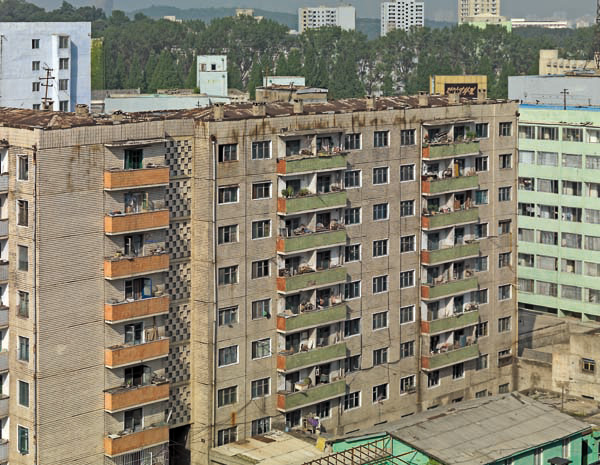 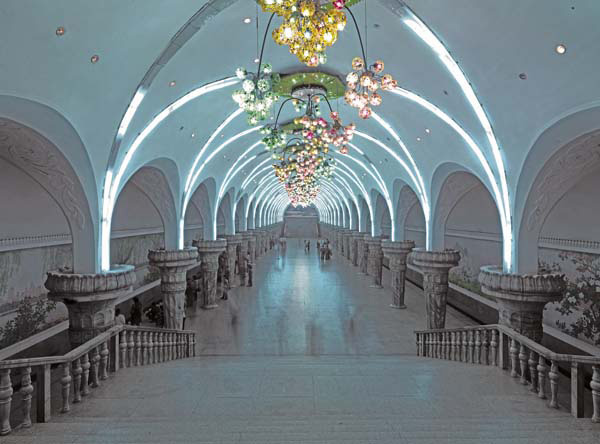 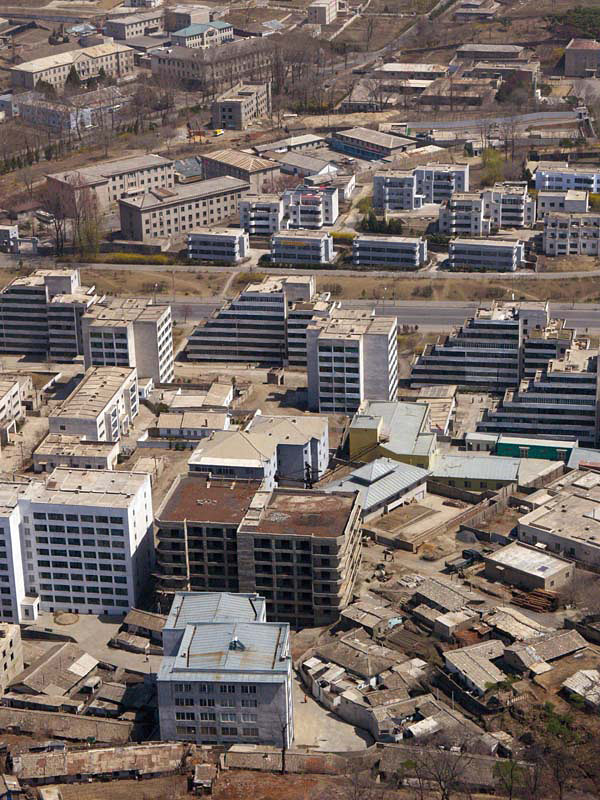 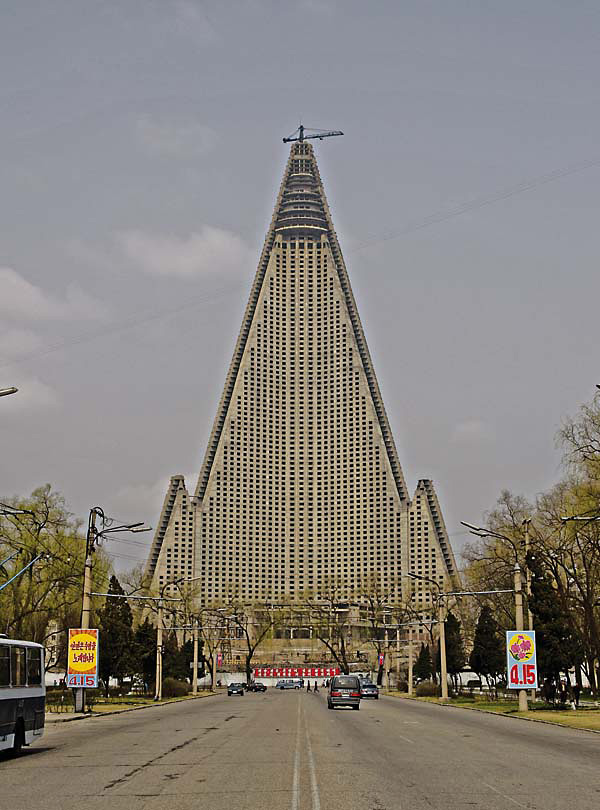 Hotel Ryugyong in the form of a pyramid, photo: Meuser/DOM publishers 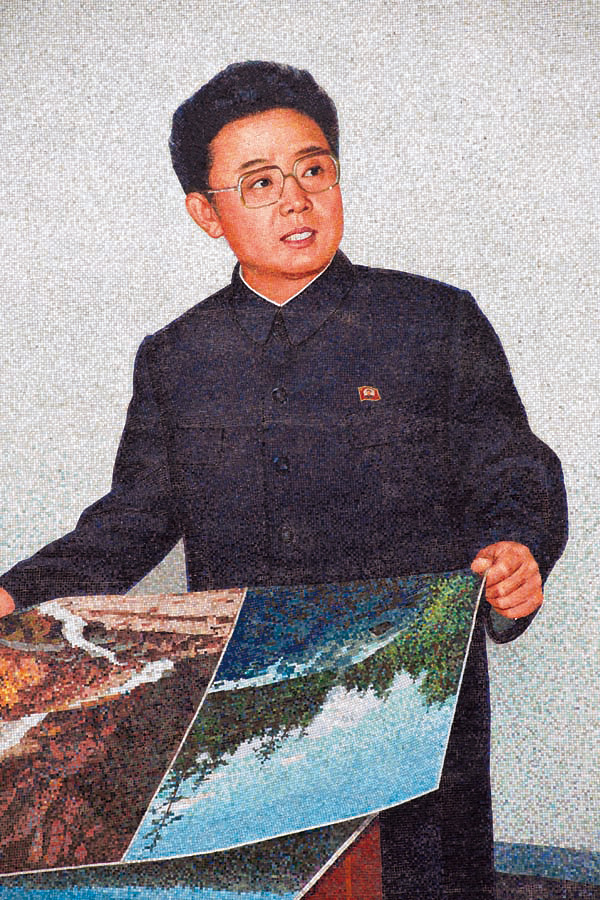 Mosaic of Kim Jong-il on the compound of the publishing house for foreign-language literature, photo: Meuser/DOM publishers
Advertisement