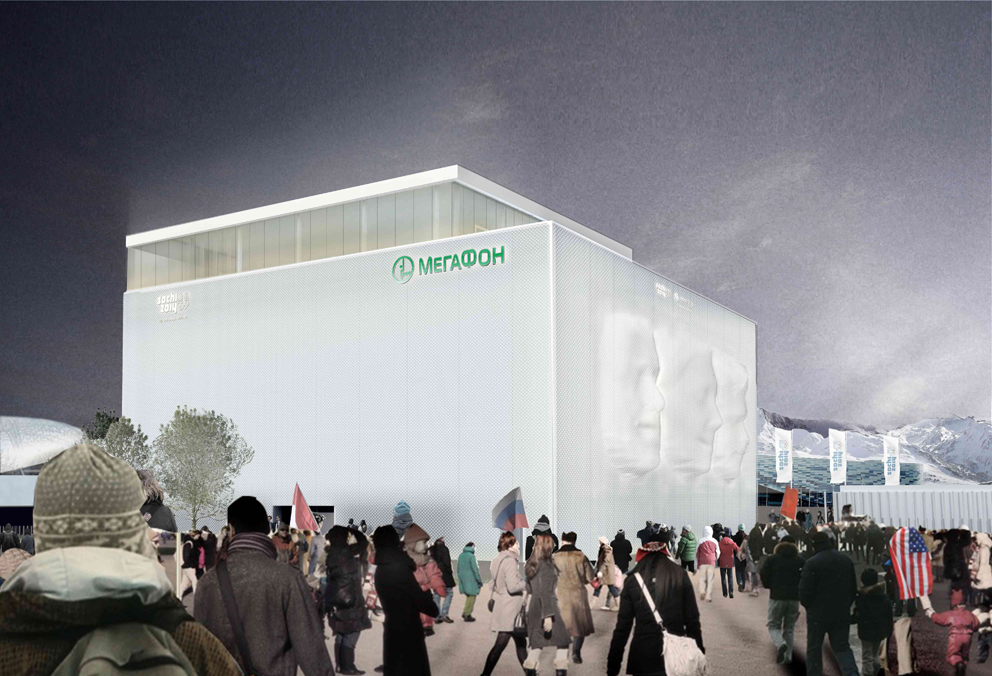 The computer simulation of the pavilion shows the effect of the interactive façade even before the Olympic Winter Games in Sochi. Photo © iart

A selfie is a photograph of oneself on social media platforms. “Selfie-ism” is spreading like wildfire (the word “selfie” was incidentally selected as Oxford Word of the Year 2013) and, with the façade concept of London-based architect Asif Khan, has taken on a whole new dimension. In collaboration with the Swiss firm “iart”, which develops communications concepts in the areas of media, art and technology, Khan conceived a façade whose three-dimensional, mutable contours enable the effect that calls to mind the so-called “pinscreen”, a standard feature in all teenagers’ bedrooms in the 1990s.

Now for the first time this “pinscreen” effect is being realized on the façade of the “MegaFon Pavilion”, a building belonging to Russia’s largest telecommunications company, “MegaFon”. The pavilion is one of the construction projects for the 2014 Winter Olympics in Sochi. The 2,000-square-meter building contains an exhibition hall, hospitality areas, a viewing terrace, an amphitheater and two rooms for radio broadcasts.

In order to generate the required facial data for the façade, 3D photo machines have been set up in the pavilion itself, as well as in selected MegaFon branches throughout Russia. Here anyone can have their face scanned, which will then be shown in three-dimensional form on the building skin. To this end the scanner takes five photos simultaneously from different angles, which are then compiled to make a 3D image and the data sent to the façade to generate the convex form. Three faces each measuring eight meters high and six meters wide can be displayed at once.

On the technical side, this “image structure” on the façade is generated by over 10,000 so-called “actuators”, giant pins that receive computer-controlled signals which they translate into mechanical movement. These telescopic cylinders can project up to two meters beyond the edge of the building. The tip of each cylinder has a RGB LED sphere, which is affixed to the white textile membrane that covers the entire façade.

The spectacle is a little reminiscent of the Mount Rushmore National Memorial in South Dakota in the United States. Only on the MegaFon Pavilion it is not the heads of presidents (at least we hope not) that we see, but of you and me. Anyone can become part of the façade – and in the age of the selfie this interactive building skin truly seems to capture the zeitgeist.

Left: The LED tips of the telescopic drive elements are clearly visible when you are close to them. Right: The three-dimensional image appears like a nail cushion which can move up to two meters from the main façade. Photos © iart 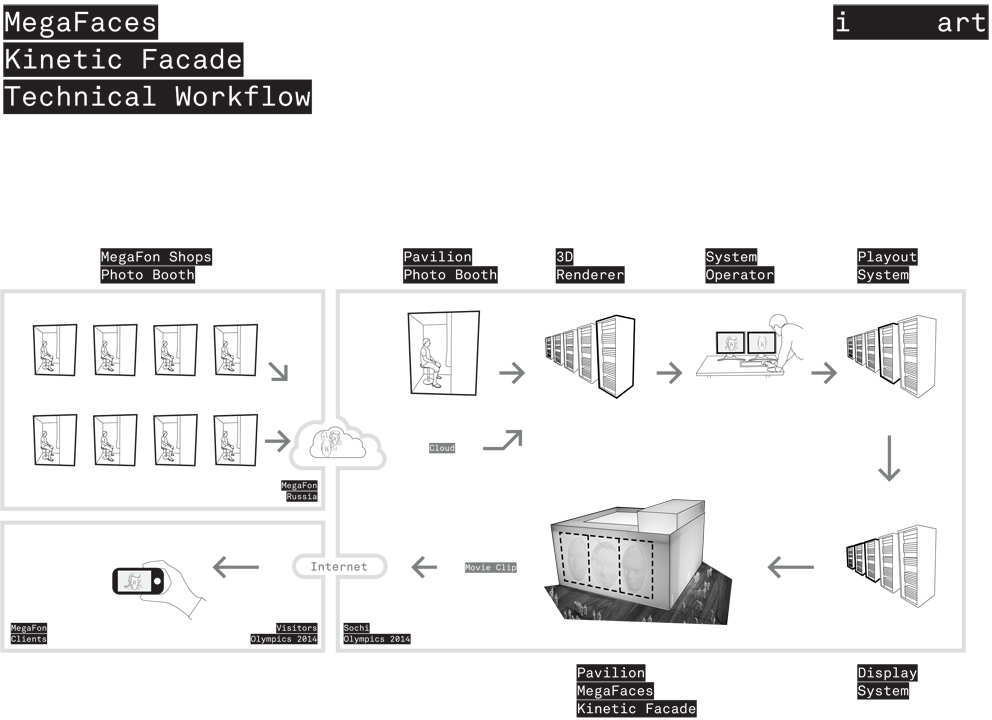 From 3D photo booth to a Selfie video on the mobile phone: The interactive facade is transmitting the image information into mechanical motion. The representation of one's face is filmed and the video is sent to the person. Drawing © iart
Stylepark Spezial: Adaptive Fassaden

› All façades are essentially media façades
› The adaptable house
› NO NO NO NO NO The book to go with the Seagram Building
› Glass, glass and nothing but glass
› Good illumination
Advertisement