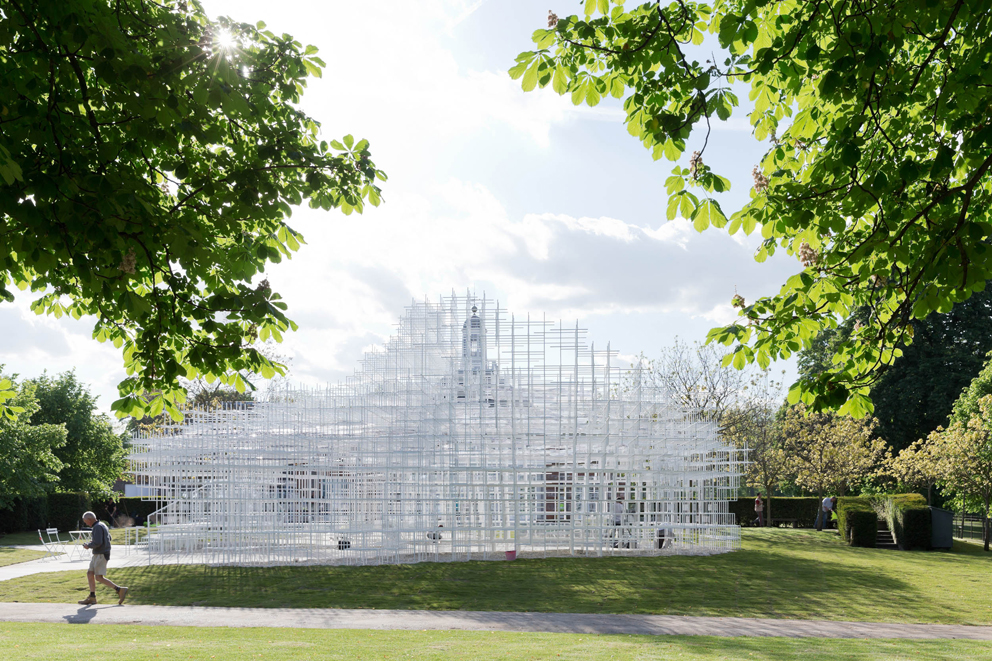 Not only in Venice there are Pavilions that attract our senses. Japanese architect Sou Fujimoto created this year’s Serpentine Gallery Pavilion in London. Every Year it shows another work by an architect who has never built in the UK before. So Sou Fujimoto follows precedents like Herzog De Meuron with Ai Weiwei, Frank Gehry, Peter Zumthor, Sanaa, Olafur Eliasson and others more. Established as a tea pavilion in 1934, the Serpentine became a gallery in 1970, founded by Arts Council England as a sister gallery to the Hayward Gallery. As a educational arts charity the Serpentine Gallery’s Exhibition, Architecture and Public Programmes attract up to 1.2 million people in any one year. Daniel von Bernstorff, Stylepark, spoke to Sophie O’Brian, Senior Exhibition Curator, about the idea behind, the choice of Fujimoto and the Pavilion as an interdisciplinary platform.

Daniel von Bernstorff: When did it start with Serpentine Pavilions? What was the original idea?

Sophie O’Brian: Architecture really came in since Julia Peyton-Jones has been the director in 2000, because it’s really a passion of hers. She loves architecture of Brazil, working with Oscar Niemeyer was for her super amazing. The idea is to show the building from rather than representations of buildings. People should experience architecture by being in the buildings themselves. It’s very important to her.

Which is very new.

O’Brian: Actually, I think it’s still pretty unique. I think there’s a few Pavilion programs starting out now. I think there’s one in Sydney about to start, and several other places. But really, we’re the only one for an international architect to build something temporary for the summer and for the site.

You have a commission searching for the architect?

O’Brian: Julia Peyton-Jones is very connected into the architecture world and there’s several members of the board of trustees who are very involved. For example Lord Peter Palumbo who is the chair of our board of trustees. It’s not a call for submissions, and it’s not a prize, so it really is by invitation. It reflects the same way we do invitations to artists for exhibitions. It’s a selective program.

The chosen project has to be the first structure for the architect in the UK?

O’Brian: Yes, of course. But for example, Herzog De Meuron has done buildings before in the UK, but never with Ai Weiwei, and that was a very particular design team because Pierre de Meuron, Jacques Herzog and Ai Weiwei have worked together many times in China, and they have a very different design vision and the way of working. When they worked, it’s the three of them, it’s not that Ai Weiwei was a secondary partner. It’s based on the very long-lasting friendship.

The choice this year is Sou Fujimoto. Why?

O’Brian: There has been a precedence in terms of Japanese architecture. We had Toyo Ito in early days and Sanaa and now Fujimoto. They’re three generations of architecture, but they’re also three generations that speak to each other, have relationships, and Fujimoto is very influenced by Sanaa and of course by Toyo Ito. They all know each other very well. So, there’s a kind of generational conversation going on. It’s a return, at this moment, to look at Japanese architecture.

With Fujimoto you choose somebody who’s not yet so present in Europe.

O’Brian: Fujimoto for an architect is quite young, 41. An architect often by the age has not built so many buildings. He has built in Japan, he has built quite a lot, but not here.

For the noble prize everyone guesses before who will it be. For the Serpentine Gallery it seems to be really free, unexpected.

O’Brian: This also reflects again our exhibition program. There are millions of artists and architects who are doing amazing things. It’s about when it’s the right moment in their career to show some bit of their work. Some architects are chosen with incredible experience like Gehry. When he did the Pavilion he had a huge career behind him. Also Peter Zumthor. At other times, it was for example Snøhetta and Olafur Eliasson. It’s nice to move between those different poles, so you can see different kinds of architecture.

I’ve been to the Vitra Campus two weeks ago, Saana realized there their first logistic hall. It’s really fascinating, Japanese work on common things, that interrupts with your expectations.

O’Brian: Yeah! That’s fantastic!It was exciting to see growing the Pavilion, a lot of it is prefabricated in sections. Sometimes it’s more built on site, other times it’s not so transparent and light. Other times it’s quite a heavy structure, solid structure, Gehry is a perfect example. Or Peter Zumthor, where it was a light material, but looked like a very solid box. So, every time is very different.

These structures seems to be quite complicated.

O’Brian: It seems like that, I wouldn’t build it myself. There are two cubes based on one larger, one smaller. It’s not a pattern that’s repeated. It is somewhat random. It creates a cloud field. The grid forms not only the walls, but also the seats, the areas for walking, the ceiling. So the grid forms everything in this structure. That has a precedent in Fujimoto’s work, because a lot of it is a multiple space, so it can be used in multiple ways. His houses in Tokyo, you can see these spaces being used for sitting, you can look out, or you can have your meal from it. All of those spaces interconnect.

Did you thought of doing a Serpentine Gallery Roadshow? It’s always a pity if after few months, it’s all dismantled again.

O’Brian: Well, it’s dismantled, but it’s never destroyed. Because we sell them every time. Because it is a zero budget project, a very limited budget project, in order to cover the costs of building, we have to sell the building. Sometimes they’re show in other places. For example Luna foundation owns the Peter Zumthor Pavilion, a piece of architecture bought for collection. Sanaa has been purchased, but I think it’s in storage at the moment. The one of Herzog de Meuron is re-installed. But we have a large book about Serpentine Pavilions, did you see it? A Taschen book, big red, that maps all of the previous pavilions. It shows not necessarily where they are, but all of the details of the buildings.

How much in advance do you plan the project?

O’Brian: Oh, Julia Peyton-Jones and the board of trustees will already be looking at a list. Probably from about June onwards. But the invitation is a six-month turnaround, so from invitation to the opening of the building it is six months, which is very short for architecture.

I guess nobody would rethink this kind of invitation.

O’Brian: I don’t think we’ve ever had a rejection. If hast to be more with time question. But the other thing is, it’s got a very few constraints. The brief is quite open. This is for an architect to realize an idea that they have. They have, of course, to meet safety, and building’s code. But apart from that, it can be really any idea. It has to be covered, it has to have a café, but this is it. It’s quite playful.

What kind of events do you plan?

O’Brian: We have a public programs called Park nights, that runs on Friday night. There will be works by artists, performances, music, film, talks. And people will have their events at Pavilion, then it’s used both during the day and in the evening. There are also the pub-nights, which is our public program for the summer, combinated with the Marathon event, which is the growing child of Hans-Ulrich Obrist, our co-director. Many different people come together to give a twenty minute presentation on a subject that’s chosen. There might be a focus on the digital age. Of course, the Fujimoto Pavilion also could be some kind of data cloud.

So the Serpentine Gallery Pavilion as interdisciplinary place where everything comes together.

O’Brian: Exactly! It’s a very ambitious attempt in embracing lots of different things, for lots of different audiences. And we’re so lucky to have people here, we have really focused like the architecture world, but also many people who are just walking through the park and happen upon our building. The Pavilion is well-loved by dog-walkers, joggers, and also families and their kids. We are growing to a second gallery, in the Royal Parks Magazine, Serpentine Sackler Gallery will be called, opening in late summer. It’s pretty much the same sort, but in a different layout inside, much more interdisciplinary, apart from exhibitions about art, design, architecture also dance and film inside, and a whole lot of other things.

We are looking forward to. Thank you for your time. 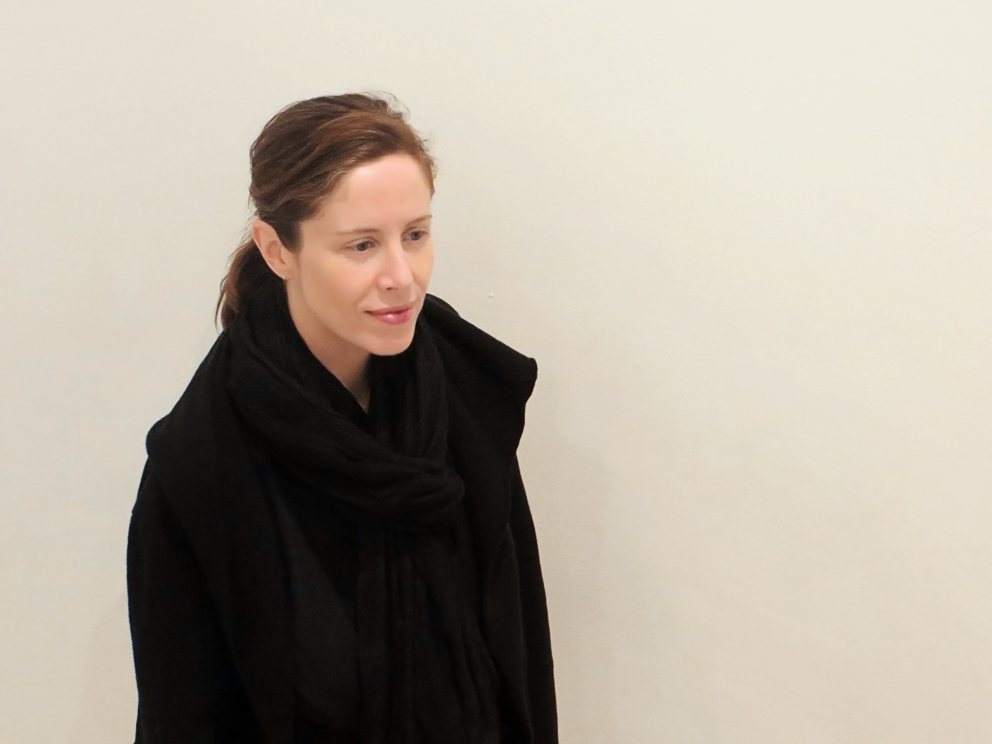 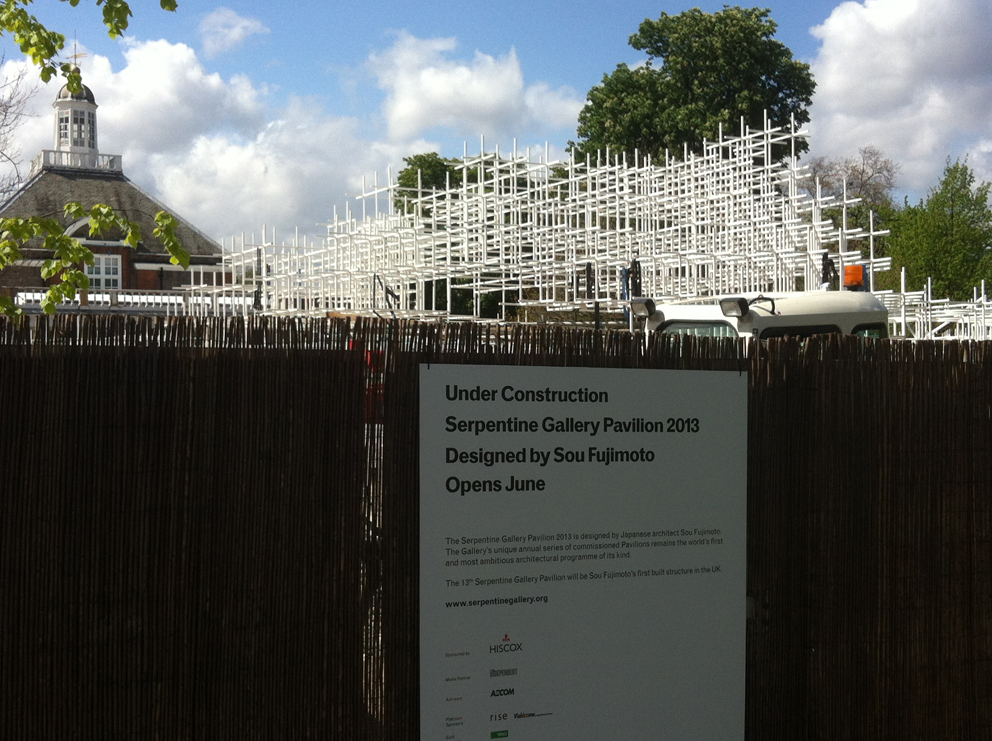 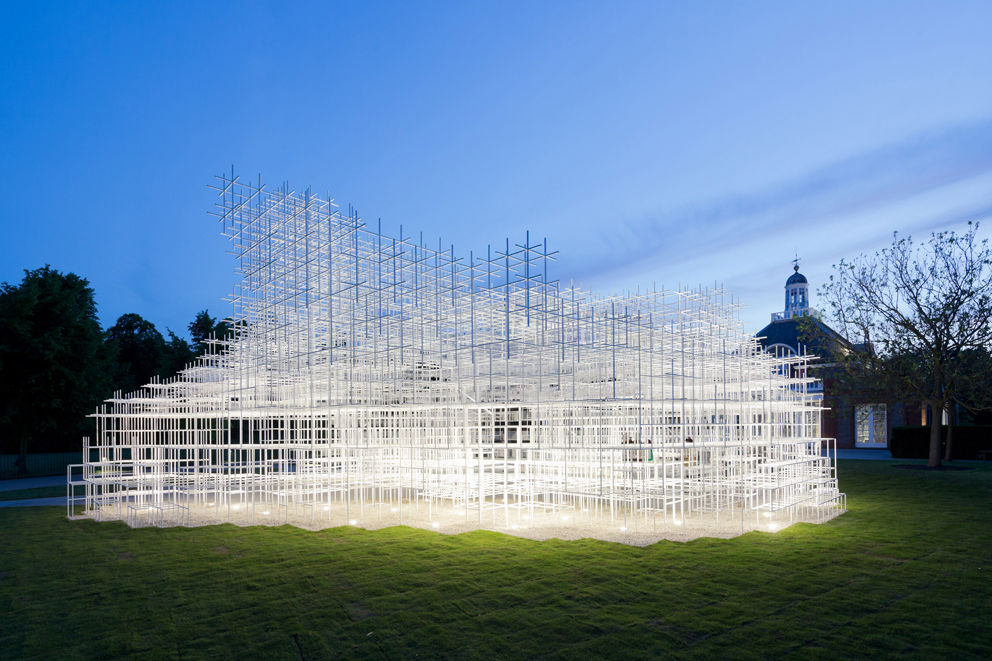 The pavilion as a illuminated cloud. Photo © Iwan Baan 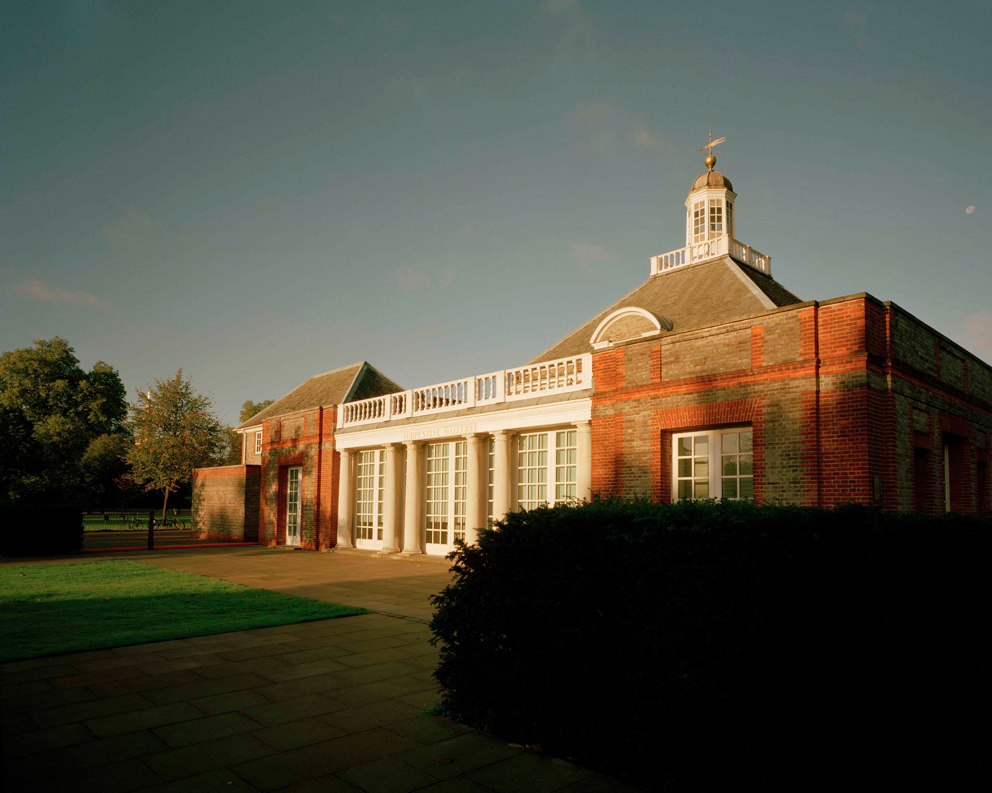 Established as a tea pavilion in 1934, the Serpentine became a gallery in 1970, founded by Arts Council England as a sister gallery to the Hayward Gallery.Photo © John Offenbach 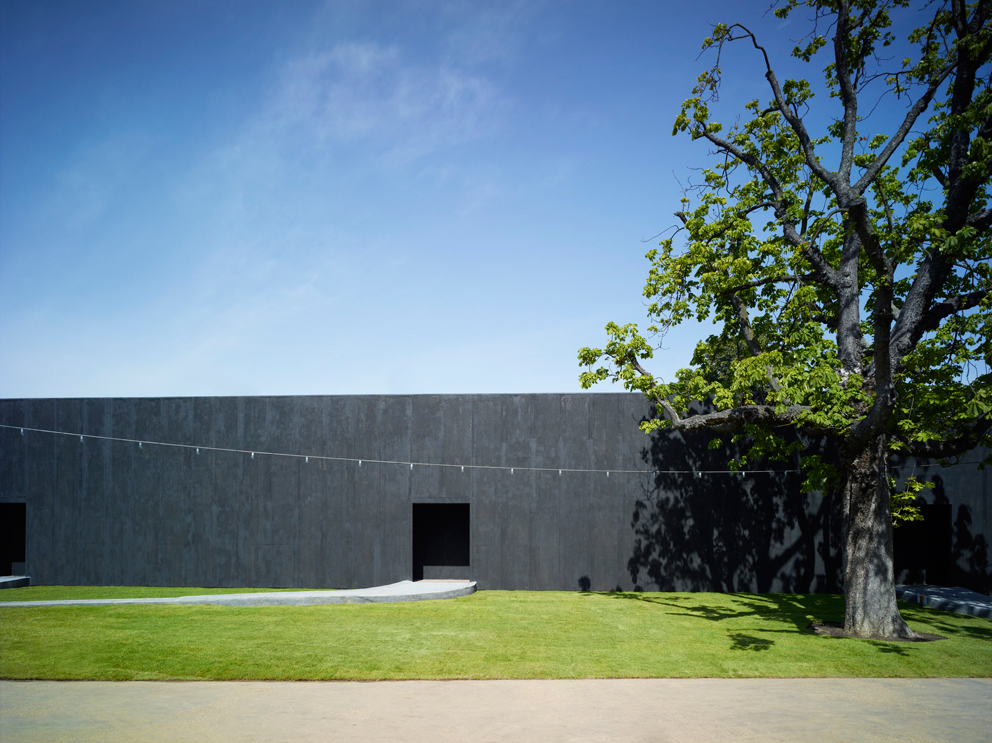 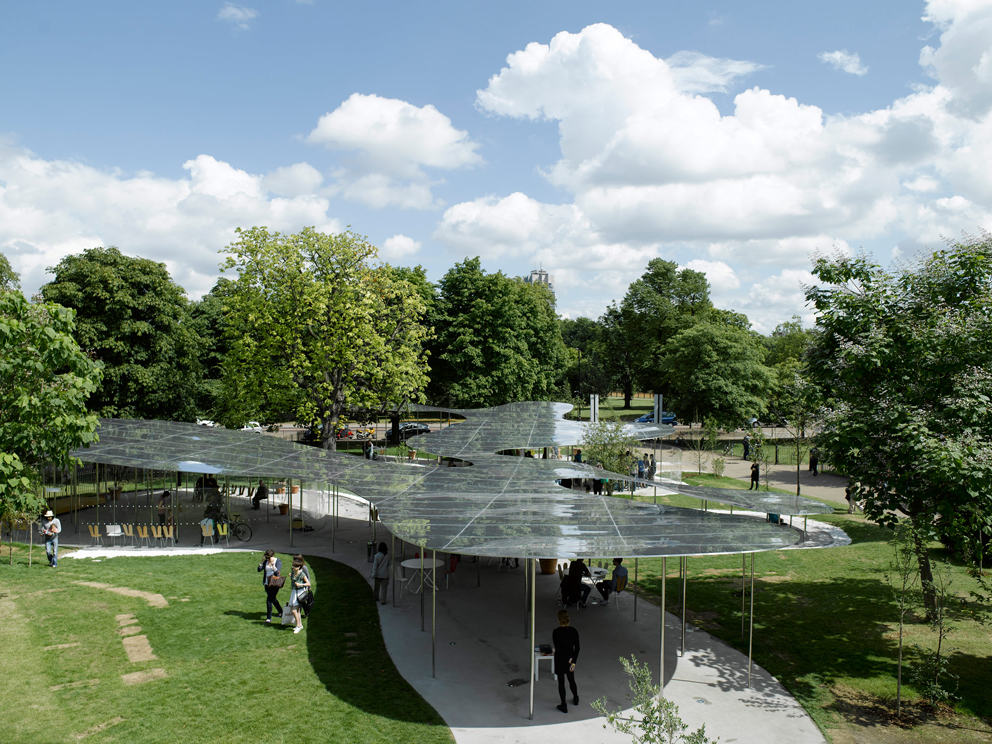 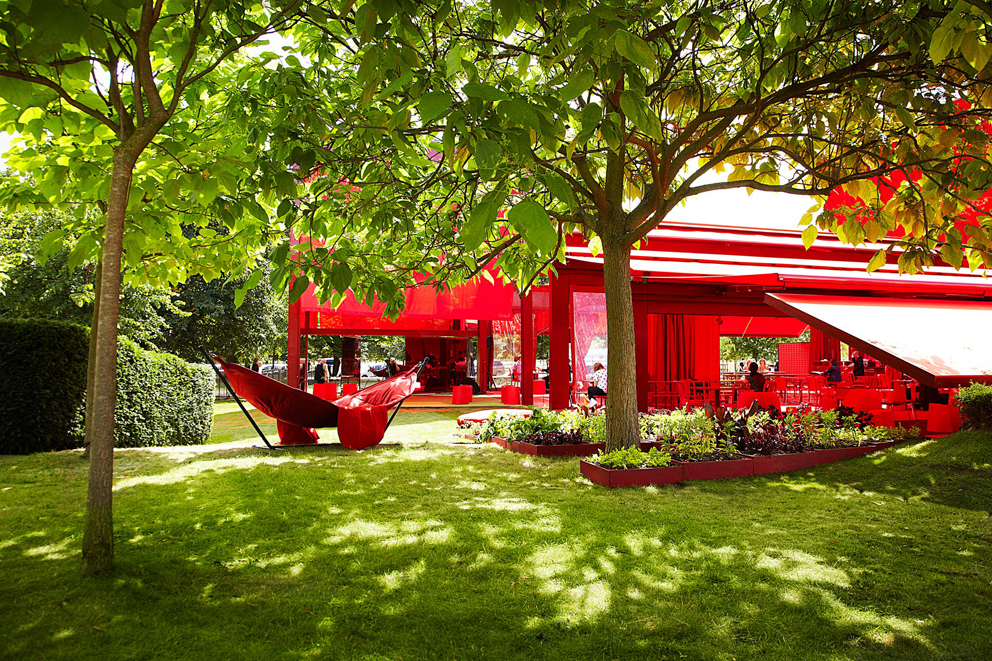 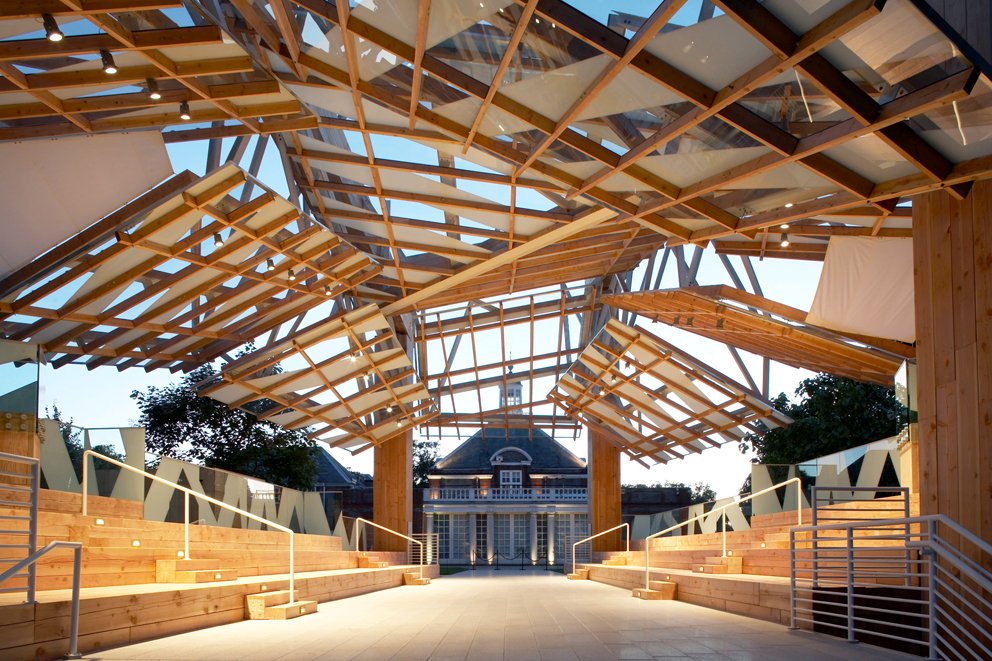 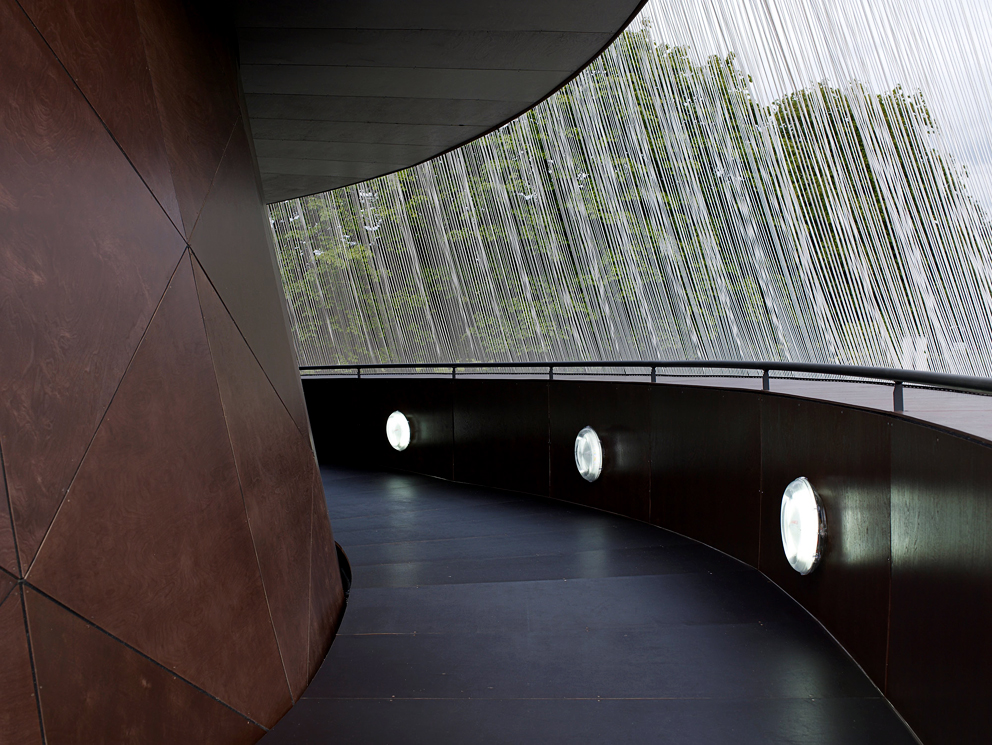 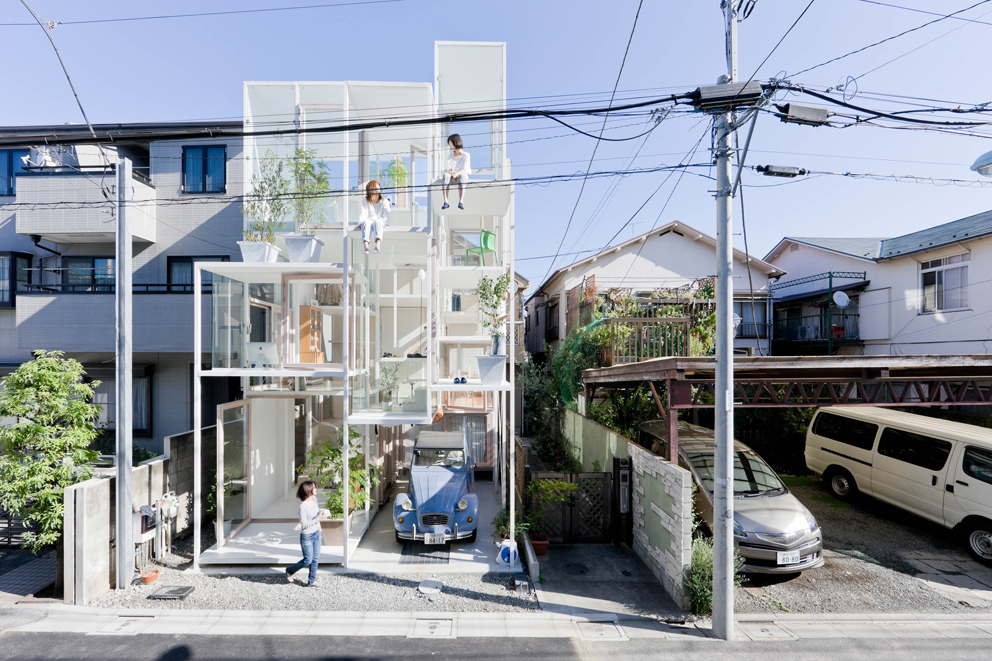 Open air and flexible use is one of Fujimotos main aspect, seen at the "House NA" for example. Photo © Iwan Baan 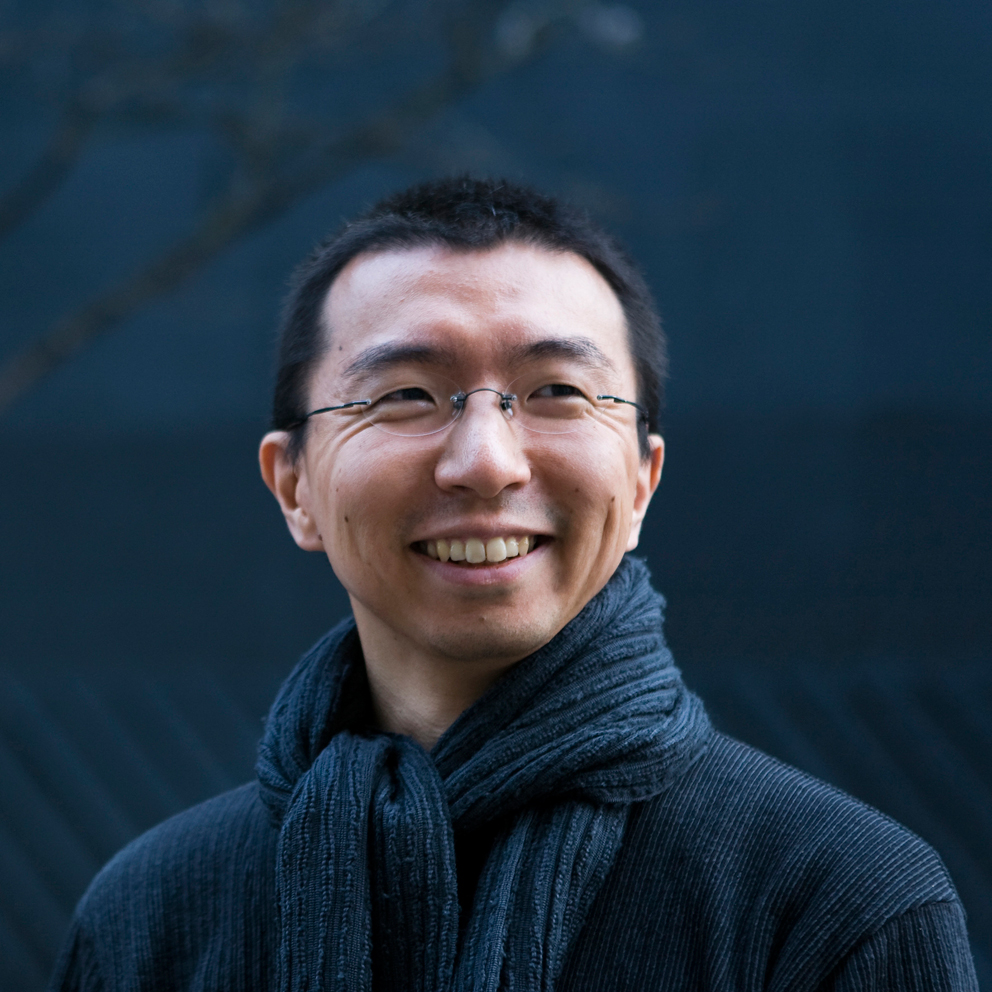 With the age of 41, Sou Fujimoto is the youngest architect who designed a pavilion for the Serpentine Gallery. Photo © David Vintiner
Advertisement