What actually is a shelf? In English, according to Webster's the word derives from the Old English term for the deck of a ship or a crag or ledge. The German word "regal", by contrast, has been in use since the 17th century and denotes a frame. But the latest edition of Kluge's Etymological Dictionary declares that the origin is not clear. The famed Brothers Grimm dictionary gives other meanings for "regal" as sovereignty, pluralized as "regalia". The register of an organ is likewise called a "regal". There are also interesting references to Johann Karl Gottfried Jacobsson's "technological dictionary or alphabetical explanation of all useful mechanical arts, fabrications and craftsmen as well as all tasks, instruments, tools and artificial words according to their properties and true usage", which was published in 1783 by Nicolai in Berlin and Stettin. We read there that "In common life, 'regal' also means a board for books, a repository, or any frame with layers in it on which goods or other items can be placed. Thus, there is 'regale' for books, goods, kitchens, etc."

Not only the origin of the term, but most definitely the future of the thing seems very much in doubt. At present, there are high-bay warehouses that are booming. They are a fully automatic location where goods of all types get turned around, definitely the epitome of the goods trade in the Internet age. Yet only their interiors are open – their exteriors are usually foreboding, tower-like buildings. Still, what will become of the shelf in the domestic realm? Will the e-book drain away its life force? Will it be emptied, robbed of its purpose, thus becoming a caricature of itself? Gerhard Matzig, architect, critic and editor at Süddeutsche Zeitung, already sounded the death knell with his editorial "Abkehr vom verschlossenen Raum" (Renunciation of the enclosed space), or "Nachruf auf das Bücherregal" (The bookshelf's obituary) (SZ, June 4, 2009). In the article, he states that, "First, books vanished from the apartment; second, the empty bookshelves themselves were converted." Worse still, "the walls, often dimensioned only in relation to how many meters of bookshelves they would fit, are disintegrating." In Matzig's opinion, this malaise did not begin with the introduction of the likes of the iPad, but is rooted far deeper in the history of design. For example, Ron Arad's "Bookworm" (1994) was an item of furniture meant to embody "an ironic citation of the educated classes", though in reality he most "likely only anticipated the disappearance of books and the distortion of their shelves to the point of dysfunction in jest." Those who wish to understand the shelf's predicament these days are required to envision its history. They must scour books, dash to the library, read, browse, leaf – if need be, in e-books, too.

An object in the room

The shelf's appeal lies in its ability to keep a room free from clutter. Basically, there is no need for books – as well as other decorative and practical objects – to be piled up on tables, chairs or even the floor. Instead, they can be lined up along the walls. In reality, however, the number of items we use on a daily basis has been increasing dramatically. In addition, digital models have long since joined the shelves of the analog world. Software such as "Delicious Library" or "Bookpedia" makes it possible to catalog one's own books – along with music and film collections – and synchronize them with the market data. Not to mention digital shelves, whose very realistic design can be admired at e-book providers of any couleur, even at Apple's e-book shop via iTunes.

Still, how did the common shelf and the bookshelf come about? The Renaissance depictions of Late Antiquity church father and translator, Sophronius Eusebius Hieronymus, better known as St. Jerome (347 to 427), such as "St. Jerome in His Study", mostly show a combination of rooms used for research, reading and writing. As was appropriate for the ascetic lifestyle of the hermit that was St. Jerome, the Renaissance painters depicted minimalistic furnishings: a lectern, an open container or a lidded cabinet, combined with a table or a bench from time to time.

The image of St. Jerome by Antonello de Messina (around 1474) shows the cardinal surrounded by the cloistral walls. In one room, whose windows open up to show the distant countryside, we see an assembly of furniture, which combines the podium, repository and a lectern used for reading and writing. Messina took the historical figure of St. Jerome from the 5th century and placed him in his own era, the Early Renaissance. The painting – along with others depicting the same motif – show St. Jerome, a man of the church, as the epitome of the researching humanist scholar.

The value of books

During the Renaissance, it was not possible simply to download books, order them on the Internet or buy them in bookshops. Using reliable master copies, wealthy book collectors such as Federico da Montrefeltro (1422-1482), the Duke of Urbino, had books manufactured themselves in year-long "cooperation with writers, line draughtsmen, miniaturists, bookbinders and silversmiths to do the bookfittings", as Bernd Roeck and Andreas Tönnesmann describe in their book, "Die Nase Italiens" (The nose of Italy). No other prince of this epoch had "used books in such a relatively subtle way to reinvent himself and similarly to portray himself on so many different levels." His library contained over one thousand codices, the majority of which are preserved in the Vatican today. These he installed in his palace, where he employed a personal librarian, who was entrusted with the task of "taking great care when showing the books to people of authority and education". He was likewise to "indicate the beauty and noblesse of script and miniatures", while ensuring that "not a page is creased in the process".

The prince's studio, or "studiolo", was on the other hand in complete chaos, "books of various formats lay wildly piled up all over the place" (Roeck/Tönnesmann). However, the books depicted here are not real, but a tromp-l'œil style image created between 1479 and 1482, with inlays made of various woods that cover the walls of the room. The open cupboards only appear to be crammed with books and everyday objects within: a thoroughly artificial and ironic self-portrayal of the Duke of Urbino.

A symbol of opening

As the first universities were founded, education spread from the ecclesiastical sphere into that of the secular world. This gave rise to dramatic changes in book furniture. Books were no longer locked in cupboards, but displayed upon large lecterns. Book cupboards lost their doors. In place of these cupboards came the bookshelves – open, sometimes even accessible from both sides. Since the codices were in any case very valuable and – until the massive spread of the letterpress – time-consuming to reproduce, they were chained up and attached to posts. This just as much hindered the theft of valuable books as it imperceptibly altered their position on the shelf. While libraries opened up, the books remained under arrest. Preacher Johann Geiler from Kayersberg differentiated between various types of bibliophiles. As he wrote in 1510, anyone who expected books to bring them glory "must learn from them, not by means of a library but through the compilation of texts in one's own head." In actual fact, one fool had collected books as if they were valuable pieces of furniture in order to flaunt them. He had "thrown the books in chains and made them into his prisoners. If they were able to free themselves and speak, they would drag him before a judge and demand that he, not they, should be incarcerated."

After the 18th century, books were freed from their chains. Today's security vis-à-vis books is more subtle: RFID chips in books emit an alarm if an unauthorized person takes a book from the shelf and leaves the bookshop or library. Arthur Schopenhauer knew that "to buy books would be a good thing if we also could buy the time to read them, but one tends to confuse the acquisition of books with the appropriation of their content."When things turn to books and the shelf they stand on, then at times the mood today is quite hysterical. Digitalization is a horror and a promise. How much public money could be saved, for example, if libraries at universities could be closed as they had been replaced by digital storage devices? At a design college in Hessen an interim lecturer was recently informed that people like him were a dying species. And with him texts on design. "No one today needs a text that is longer than an SMS," declared the government-payrolled design teacher to her colleague whose contract was so precarious. It's a moot point whether we would then find out what a shelf is...

Already published in our series on product-typologies:
› "Everything that is furniture" by Thomas Wagner
› "Do not lean back!" on stools by Nina Reetzke
› "On tranquility and comfort" on lounge chairs by Mathias Remmele
› "Foam meadow, stays fresh for longer" by Markus Frenzl
› "In Chair World" on chairs by Sandra Hofmeister
› "All the things chair can be" by Claus Richter 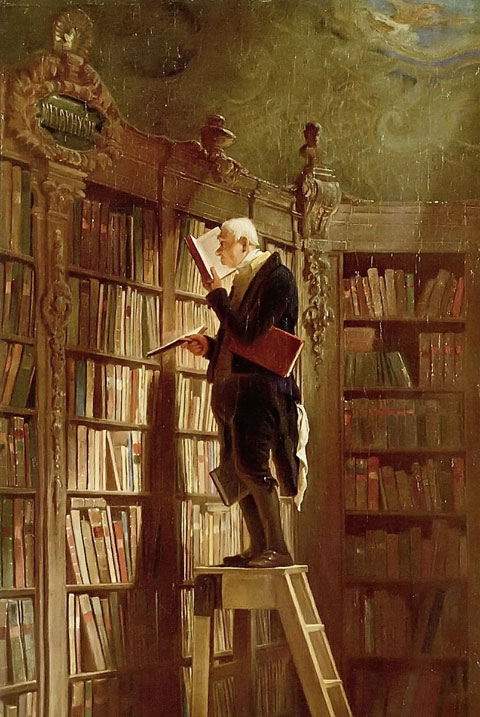 "Der Bücherwurm" by Carl Spitzweg, about 1850 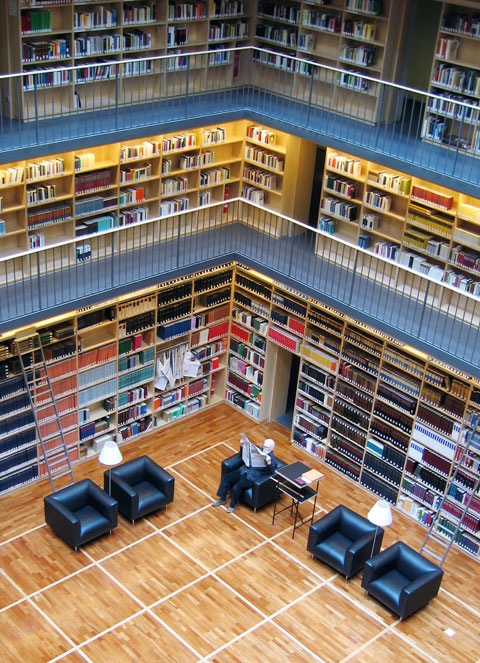 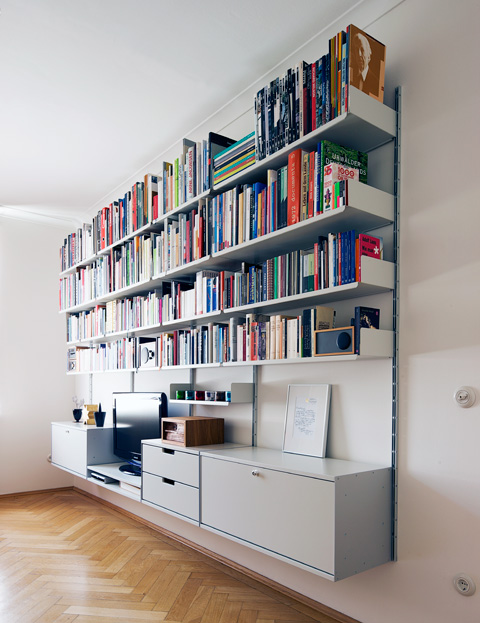 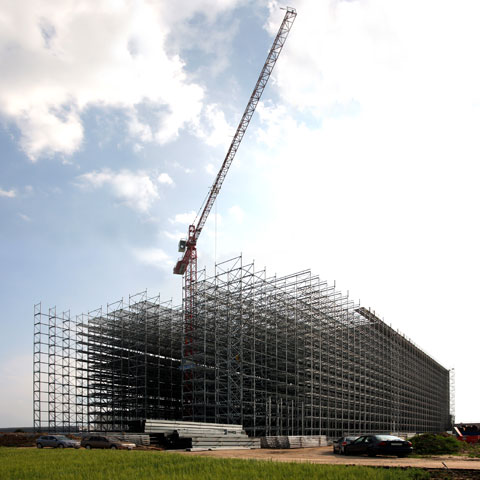 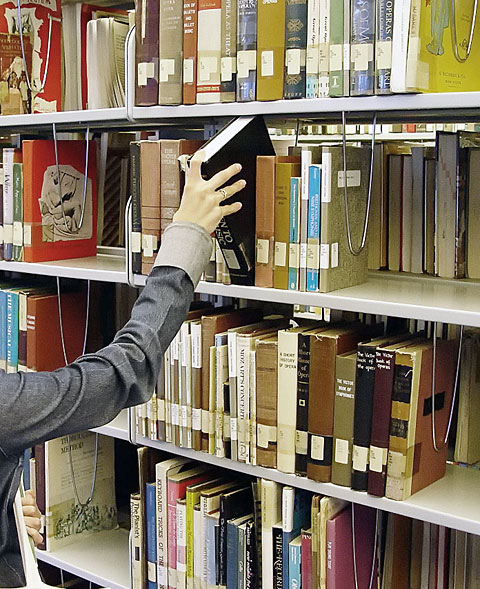 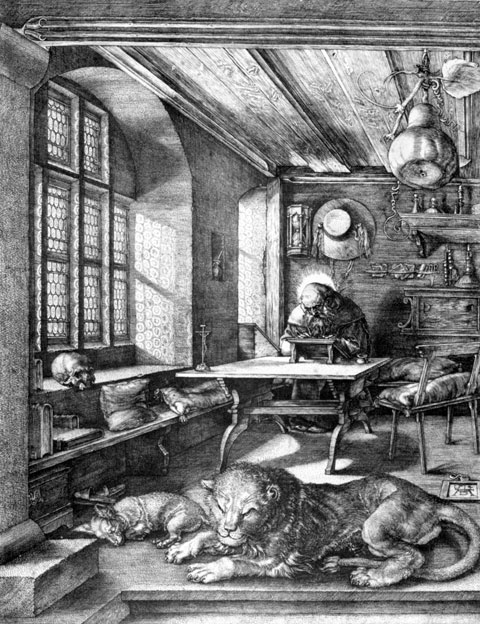 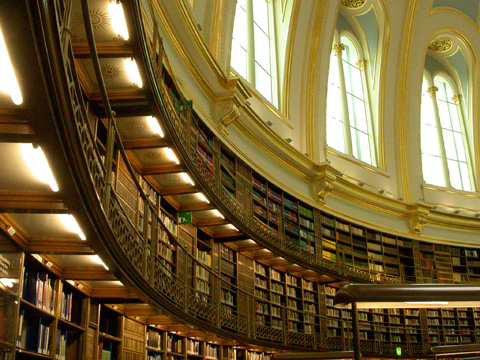 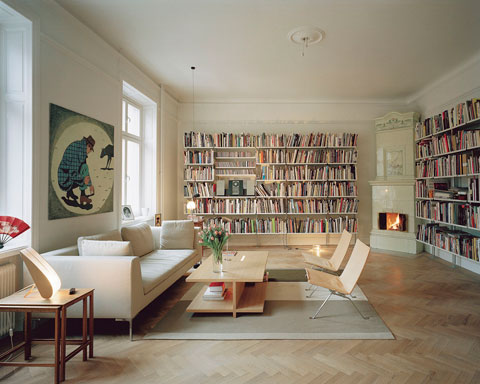 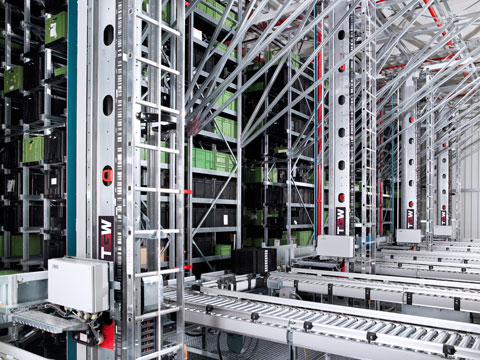 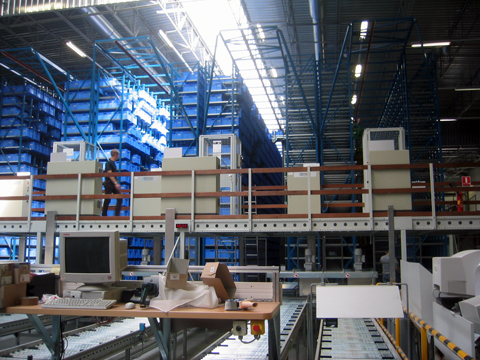