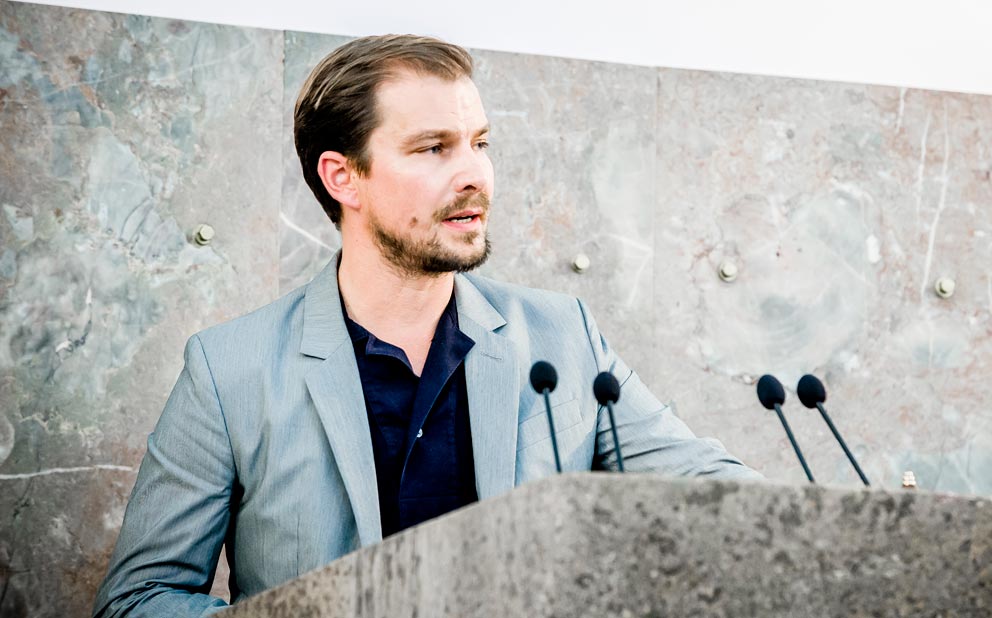 The designer Stefan Diez has given a lecture on the situation of design in Germany and Europe in the "Second German design debate". Photo © Ulrich Schepp

Someone without inside knowledge might indeed gain the impression that consumer goods from Europe carve up the upper market segment between them. Fashion and accessories come from Italy and France, glasses from Austria, furniture from Italy, cars, bathroom fittings and bathroom suites from Germany. Otherwise, a couple of sports article and fashion manufacturers from the United States, and of course Apple, make it to our shopping malls. Very little comes from Asia, though Japan is an exception. Things seem to be going well for Europe as the perceived market leader in consumer articles in the high-end segment.
What interests me as the representative of a younger generation of designers is the question of to what extent we influence this situation.

Typically, the brands that gain entry to the global markets, and are successful in placing their products, stem from the past. The values they communicate are almost always a reflection of an older concept of luxury that is not really supported by the young generation, or at least should not be. Because brands from Europe were repeatedly able to capture new markets in the last 20 years they find it easy to win new customers using the same old arguments. These are customers who find the explanations of marketing departments plausible and are content to feel that they have bought a modern product, not even realizing that many products are simply yesterday’s newspapers. The values that have long since begun to change are rarely adequately translated into modern products.

However, young designers based in Germany no longer seem interested in old stories. The young generation is currently working in the overcrowded and dry-as-dust niche of the avant-garde. A forum for ideas that are seemingly increasingly irrelevant, and lacking a true market. The products that are created often look home-made and tend not to extend beyond the domain of furniture or luminaires. That not only lies in their personal interest in such products (given that they are directly linked to our ideas about home and living) but is also determined by the fact that this segment remains the most accessible and most open to experiments and you can work with affordable crafts techniques.

Add to this the fact that Germany has seen very many important brands from the consumer goods segment die, brands that could have said something about life in our country beyond the fields of investment goods. Evidently, we find it difficult in Germany to relate to products that do not stand out primarily for their technical superiority. Naturally, every now and again a luxury corporation generates a project, accessories perhaps for a successful coffee maker manufacturer or travel utensils for den modern nomad for a maker of luxury bags. Or someone has a car body wonderfully exhibited in Milan by designers. That is questionable, even cynical, especially if new ideas and the commitment involved are simply not taken seriously. When things progress no farther than PR projects and lip service so that designers end up working in vain, and in the long run stop believing in the relevance of what they’re doing. The one or other complains that he has been taken in by false ideas and was let down.

Ten years ago Konstantin Grcic, acting as the representative of what was then the younger generation, mentioned several highly-promising projects where independent design studios from different countries in Europe cooperated with industry. He saw them as proof of the fact that a dialog is possible between really big industry and the small, independent office. Today, I would claim that none of these projects was successfully completed. Ten years on you cannot buy toasters, kettles, coffee-makers, vacuum cleaners or mixers anywhere in Germany with a modern design. Except at the flea market.

As a market for established industries we have evidently become too unimportant and all too frequently, too unimportant to ourselves. Today, the one or other established designer prefers to rehash old ideas rather than coming up with truly new ones. I am not thinking here mainly of retro-design, which at least makes no pretensions to be anything other than it is but rather the sampling of fragments. It’s a method that satisfies the desire for faster, more impatient realization, but it ends in eclecticism and not in logical, consistent product semantics that might even be capable of representing an era’s own individual style. Or they find an even smaller niche in galleries, where everyday items are offered that the designers who created them cannot afford.

For a long time we subscribed to the romantic notion that design today can only function according to the genius principle. I recall the office of Richard Sapper in Milan, when I worked for him as an assistant, and which consisted largely of a large table in a room in his apartment. More of a study, he didn’t need an actual office for his work as designer. He was able to rely on a functioning network that the firms he cooperated with maintained and chiefly comprising development departments, model builders and their own production. These firms retained the control over their proprietary knowledge and were proud of special skills often guarded like secrets, with which they kept the competition at bay. Today, many brands no longer have their own production set-ups and rarely have comprehensive, competent development departments. They have outsourced their specialist knowledge to countless supplier firms in the interests of maintaining a broader portfolio. Why bother with a cutlery maker for instance, when cutlery can be ordered much more inexpensively in China?

In fact today you can order everything somewhere or other. But I am not trying to make a point here about China or Asia. Nor about the miserable environmental and labor conditions that you then accept, and which in your own country would be termed exploitation. These examples simply make the changes especially clear: As global distribution is such a costly business, right now diversifying one’s product range simply seems to make entrepreneurial sense. Once the distribution structure is in place it is only logical to follow up with a broad product range. Following the outsourcing phase and diversification of the portfolio, design is the only tool of differentiation available to brands. But if design falls short because the interfaces to the girls and boys in development and production no longer function properly then many products only differ in styling, while the results remain generic and progress grinds to a halt.

Today, design comes about at the interface of internal and external operating structures: this is the paradigm change that has taken place in recent years. Yet if you have to rely on outside networks then alongside good contacts you also need, above all, an in-depth and comprehensive insider knowledge, in order to be able to make informed decisions and produce sound design work.

If this is to become an opportunity for the new generation of designers then changes must be made to students’ training. Now, all too often students are not familiarized with the complexities of their chosen profession, and are left believing that an ingenious idea is sufficient to be taken seriously by industry. If there is to be a chance for the new generation of firms then our industry needs to cater less to the average global customer, summon up more courage and seek less consensus. The role of the German Design Council as the intermediary in projects such as the YDMI and D3 are pioneering, but are still, for whatever reason concentrated mainly on the field of furniture.

Driven by machine tools and automobile manufacture, industry here is based on a division of labor and therefore creates many interfaces from which we designers can benefit. Everywhere there are small and mid-sized firms, doing research and development work, in order to extend the limits of what is feasible and to meet the challenges facing the industry. But the objectives of research are not always clear from the perspective of the supplier and for this reason many ideas remain as off-shoots. Ideas that become valuable when we realize what can be done with them in combination. In this manner our networks are gradually becoming the guardians of innovative product development in Europe.

Quite an interesting role that is being ascribed to us designers, given that we work quite naturally at many hubs of the network. With the right contacts in the background we can not only deliver our customers a design today but also a sense of how ideas are to be implemented.

Even if certain issues still remain to be settled such as how intellectual property on the Web can be adequately recompensed and protected; what has been created here in Central Europe from accessible know-how and knowledge is an incredible foundation for firms, not only from Europe. For firms that address the simple products of everyday life and contribute an important facet, which in Germany is only represented by a few international brands.

Design “Made in Germany”: Our generation does not derive its cultural identity from German brands but from local networks. In collaboration with firms less willing to make compromises it flows into globally produced products, which one day might replace the old stories from Europe.