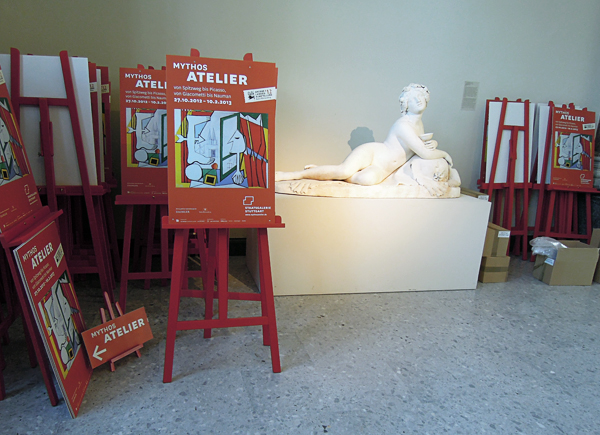 While the architect has his office, and the designer his workshop, the artist has a studio. And the studio of course differs somewhat from a run-of-the-mill office or an idea factory defined by the teamwork carried out there. Anyone who takes a look at the exhibition “The Studio” in the Staatsgalerie Stuttgart will soon see the differences. After all, since Romanticism, the artist’s studio has retained its status as a rather mysterious place where ideas and creativity roam free, muses gather and if everything goes to plan the artifex is kissed by inspiration.

The studio sees everything: painting, casting or taking photographs, shooting the breeze with collectors and curators, celebrating, complaining about colleagues or reflecting on a particular painting or installation or indeed on art in general: Despite its prevalence as a setting for all of these activities, the studio has now become a rather different place in comparison to the 19th century. It is no longer taken for granted as the room that holds the painter’s easel.

In past times, there was barely an image of a studio that didn’t depict an easel in one form or another: which is how the easel has not only become a symbol of the studio itself but also an ideal advertising vehicle. This is probably why shortly before the exhibition’s inauguration there are a whole bunch of easels advertising the show in one of the rooms at the old Staatsgalerie Stuttgart, waiting for the visitors to arrive, all seeking a glimpse through the keyhole into the creative cosmos of the artist. tw