Having investigated the seven recurring obsessions of Italian design and explored the complex relationship between mass and non-mass production, the Triennale Design Museum in Milan is renewing itself once again by presenting its third edition entitled "Quali cose siamo" (The things we are). Curated by Alessandro Mendini and featuring a display organized by French artist and designer Pierre Charpin, this exhibition, though more stimulating while inviting visitors to reflect on the intimate relationship man establishes with objects, is perhaps more difficult to grasp and somewhat less immediate than the previous two. There is no single key to interpreting this complex collection, as everyone is free to create their own history of design.

In his outstanding selection, Mendini, an architect and designer, artist and thinker, has succeeded in taking the step from criticism to anthropology: The museum has become a ‘container' of memories and stories. Staged with scientific precision, the Babel-like, multilingual approach plays on contrasts, combining important and banal objects, luxurious and poor, ancient and contemporary, provocative and political. Eight hundred pieces are on show, chosen not in any particular chronological, stylistic or typological order, but according to narrative and affective exploration, like the work of a collector. "A choice that may appear disorientated," explains Museum Director Silvana Annichiarico, "but with the precise aim of broadening the boundaries of what is traditionally perceived as ‘design'".

The collection takes up the leitmotiv of Mendini's thought - kitsch, banal objects, fragments of stories - and appears to immerse visitors in one of his famous ‘mind maps' where everything is inter-connected. 800 objects hiding a story, important not because of their intrinsic value, but because of the relationship they have established with their users. It is for this reason that the exhibition features Achille Castiglioni's work apron and the journalist Indro Montanelli's Olivetti Lettera 22 typewriter, as well as numerous icons of Italian design that have been worked on by artisans and artists, transforming them into unique pieces. Observing them, we cannot see the boundary between art and design.

"I was inspired by memories, by what we encounter during a lifetime," comments Alessandro Mendini, "I observed objects and our relationship with them. I instinctively chose those objects, things and themes that can be attributed to the world of Italian design, that tell of those who used them, of life beyond the product. We are, in effect, things among things. We are our own things. And thus the inevitable question must be: "What things are we?"

The curator's hypothesis is that, in Italy, a large parallel world exists alongside that of institutional design, namely one of invisible and unorthodox design. For this reason, the collection draws on the vast range of layers in Italy and on the network of industrial museums, which the Triennale Design Museum aims to translate into a system that is able to create culture.

The French artist and designer Pierre Charpin has been called upon to bring order to Mendini's impressive selection. Composed of large islands and low platforms, the display - a metaphor for a running river or stream of thought - relates objects to one another and plays on relationships on a staggered scale by placing enormous objects next to tiny ones. An allocation of pieces that is also eccentric: Objects are located where you would not expect to find them in order to create amazement and convey a sense of wonder. The exploration is not continuous but ends with the "Towers of Babel": utopian representations of modern living. "I wanted to make the museum almost ‘transparent'," confesses Charpin, "by keeping the installation as neutral as possible in order to make the objects speak, not the space that contains them". 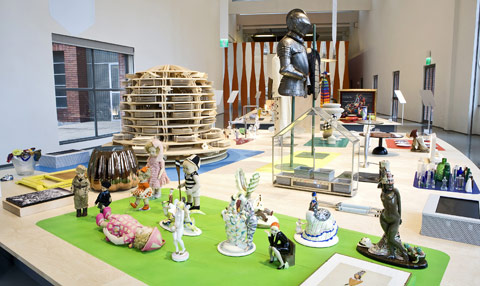 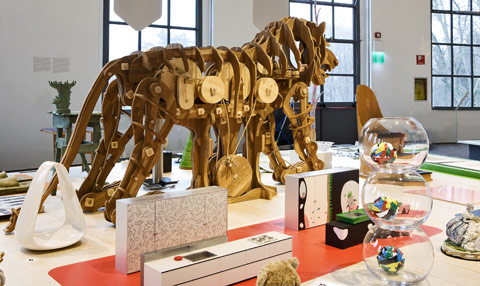 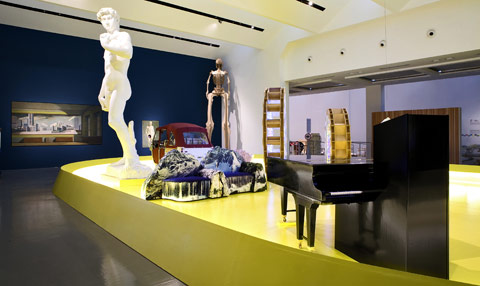 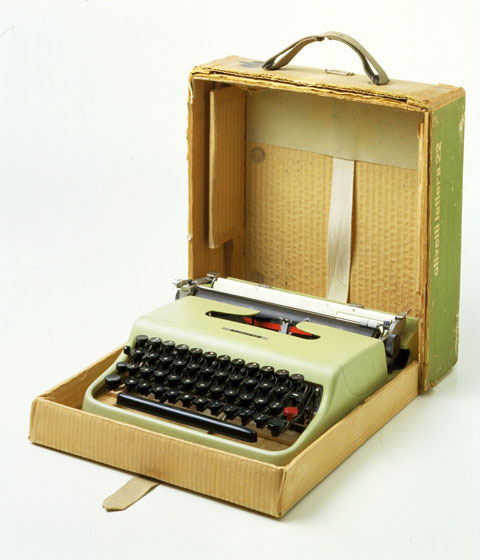 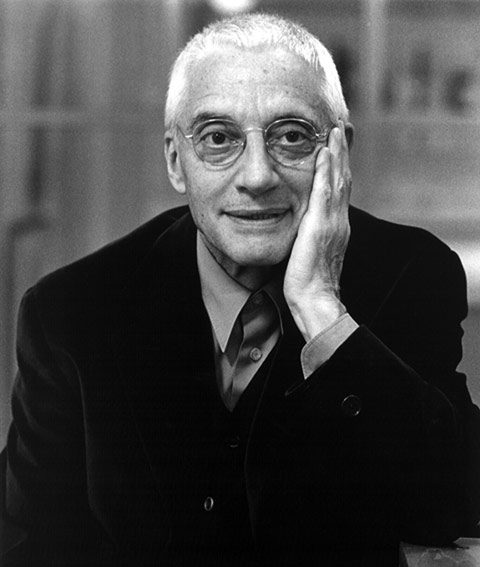 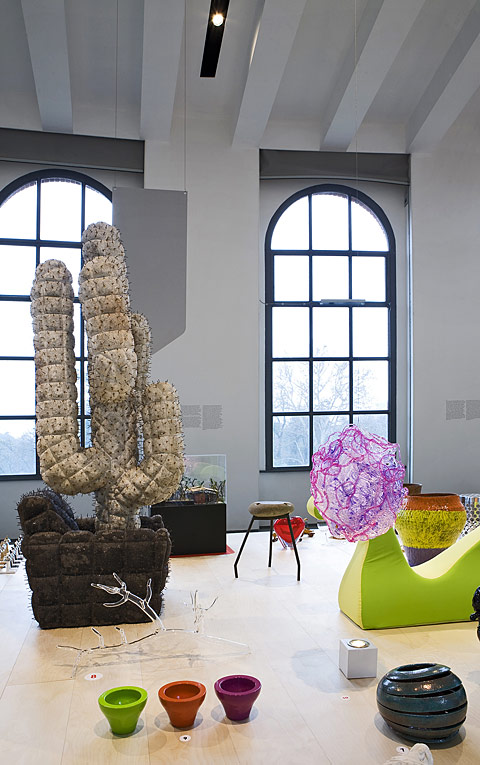 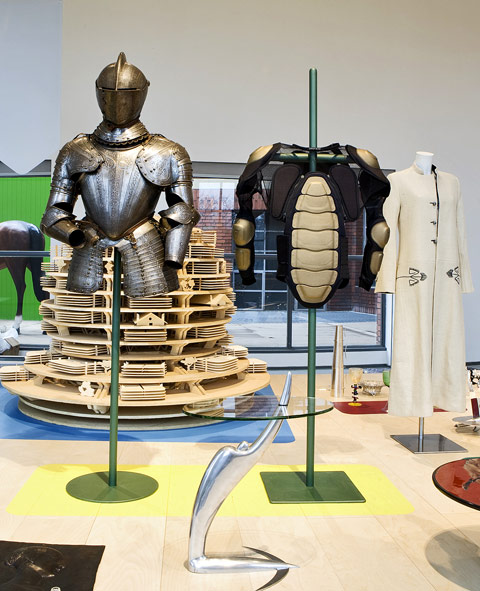 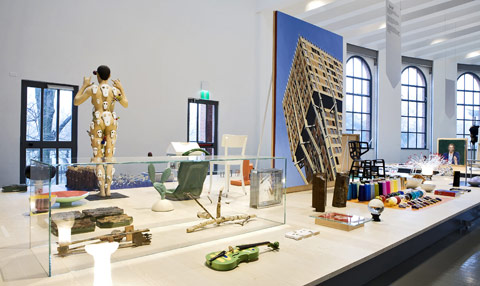 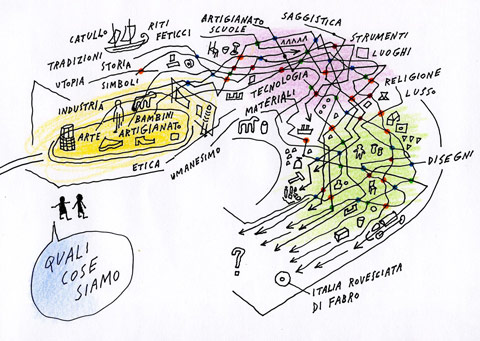 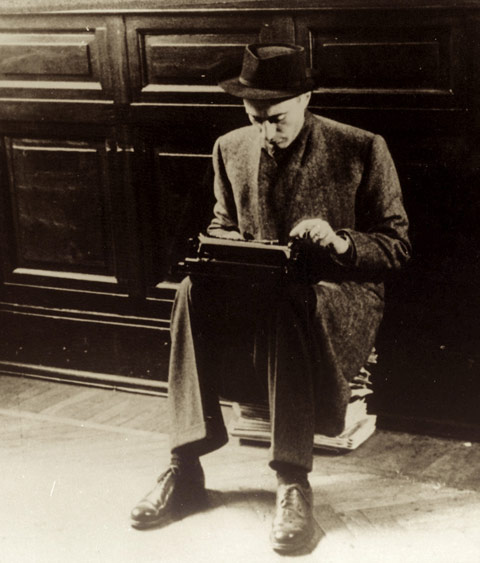