"Net 'n' Nest" is the name of Vitra's office concept - which loosely means being linked in a relaxed way. No other manufacturer at Orgatec displayed such a wide range of models for communicative working in the office. In Cologne Claudia Beckmann and Thomas Wagner spoke to Hanns-Peter Cohn, CEO of Vitra, about the idea of collage, the significance of the digital office, globalization and CO2 reduction.

"Net 'n' Nest" is the name of Vitra's overall concept for the present-day office. Basically it is an idea. Are you not worried that this will be lost when it is interpreted by very different designers?
Hanns-Peter Cohn: Here in Cologne at Orgatec we have to respect every individual designer in the presentation space. The overall collection, however, is structured such that when there is a concrete project we can mix the objects. This involves the consulting and planning architects working together with the client. We can only show examples at a trade fair - and we don't even know if we're making the right choice. But we try, in order to demonstrate that there are different ways of perceiving things. When we delve into the heart of a project, however, we have to be far more precise with regard to our clients' ideas and wishes, and make the program more individual with the appropriate configurations.

Are you now extending the collage idea from your Home Collection to the office? Are you not in the comfortable position - and not just with regard to Nesting - of being able to delve into one large pool to develop an individual solution from many individual product languages?
Cohn: In principle, yes. The difference from the Home Collection admittedly is that when furnishing an office only a certain group makes the decisions, whereas with an apartment everyone decides the details individually. In an office everything is made for a team and not for an individual person. And this means you have to make compromises. However, to a certain degree we are also working with the Collage principle here.
Would the next step not involve making the office even more democratic? At least as far as the networking side of things is concerned? Everyone feels comfortable in a different situation and can withdraw and concentrate in different conditions.
Hanns-Peter Cohn: If you design an office with visual consistency all the more opportunities emerge for creating individual nesting zones, the marketplace or whatever you like to call it. Then you can indeed have a little café and elsewhere a double sofa or an elevated seat. With our diverse nesting range we strive to demonstrate a raft of ways of withdrawing. But the overall structure of the office must be right, or it won't work.

With regard to the office you talk of three mega trends: digitalization, globalization and the CO2 problem, in other words energy efficiency and environmental protection. Which component are you most driven by?
Cohn: All three are more or less equal - although digitalization was the prerequisite for being able to develop a modern open-space office at all. You will notice that I consciously don't use the term open-plan office because the open plan office was experimental.

... Open-plan offices were around long before digitalization...
... exactly, and that was the mistake. The open-plan office was experimental, but back when the time was not yet rife for it. Digitalization in offices first made open-plan offices possible, because it is indeed the case that part of the work is done on computers - and it really is possible to concentrate in a large room. I notice it with myself. What I don't want to hear, I don't hear. But if I pick up what is going on around me I can instantly join in the conversation. Much more important is the question of whether we still need an office at all. After all, the office is everywhere! In the car, in the train - everywhere. If we still need an office then not for work but for communication purposes, nothing more. We work everywhere. Teamwork, direct communication, that's what it's all about.

In other words the office is the place for direct communication, because the media side takes place everywhere?
Cohn: Yes, direct communication and teamwork, these are the prerequisites. And if the office is "everywhere" then I could also work at home, which would be the most comfortable. But I would also like to talk about the other two factors.
As far as globalization is concerned, these days we increasingly meet people from other countries, especially in small and medium-sized businesses - and these people have to be brought together. It doesn't help if they exist as an outsider. If they work together in a team then they are integrated.
The CO2 question is also easy to answer: Joint use of large spaces allows you to minimize traveling and bring individual departments closer together. This creates an efficient use of space, which in turn creates less CO2 pollution. Then there are other considerations like hoteling and touch-down workspaces, which means that the office spaces are temporarily assigned to people who are only in the office one or two days a week. Take for example a company such as Accenture in Kronberg. They have 600 work spaces available for 1,600 staff. It works, but has to be organized. In this case, of course, they make the office incredibly chic and inspirational in order to achieve a balance...

These are the positive aspects. But there is also the aspect of social control. There is a link between the two.
Cohn: I see the control aspect less. Let me give you an example. We had the privilege of furnishing Google's European headquarters in Zurich. Being curious, I first went to see the corporate headquarters in Mountain View. There I came to realize that the Google campus was in principle no different from the Stanford University campus in Paalo Alto. In other words Google consciously avoids creating a difference between university and business campuses so that people don't have to enter a new world, they can remain easygoing and goal-oriented. Like students are. Otherwise, when people join a company they are confronted with a hierarchy and with control and authority. This is exactly what should be avoided. In a modern world a 20-year old sits next to a 50-year old, who is further up the hierarchy but not as talented. And these things mix: there is communal learning, with no hierarchy. The modern world is one of mutual acceptance and interaction.

Are you and your designers trying to take a step in the direction of non-hierarchical communication and at the same time developing models for a post-heroic management?
Cohn: Yes and no. There are also certain hierarchies we have to respect. These are by and large culturally determined. Consider the Near East - there's no need to talk about abolishing hierarchy there. Or take France - there, of course the "patron" has a separate office. It is more about overlapping. Not everything we say is always right. Some organizations value non-hierarchical organization and these are often companies in the creative field.

Vitra is nevertheless attempting in a gentle, pleasant way to tone down if not hierarchy itself then things like the symbols of hierarchy. In my opinion Antonio Citterio's boss' workplace ACE, which combines value and communication, demonstrates just what form this can take.
Cohn: Exactly. At the moment we too are getting rid of the walls on the floor I work on. I'm going to treat myself to one of these Citterio offices. Then I'll be in the thick of things, but have different fittings.

You are presenting a new conference table designed by Alberto Meda especially for video conferences. Do you think that given improved technology the video conference is going to make a comeback to the office?
Cohn: It's the same as with the open-plan office. The time is rife. Today when I speak at a video conference my partner answers instantly. Five years ago that was totally different. There was a delay, the picture was shaky, and then you lost the connection. Today it is technically possible.

If companies with global operations develop their own office culture, do they also develop an identity?
Cohn: This is an important point. What I think, however, is that fundamental cultural change actually consists of seeing our life as a network. Let's take Vitra as an example. In our company we see no difference between the respected designers, our suppliers, our staff and our clients. They all have to function in a network, so they all have to be treated the same. You cannot furnish the ‘showroom' differently from the back offices. Otherwise you create differences again. Or the salesperson has a company car and the employee in the supply section doesn't. That's not on. The rules of the game have to be the same for everyone, at least in terms of how they interact. Where there are hierarchies, people generally don't greet one another. Or the person further up expects that someone lower down the scale greets him, the older, first. That's a joke. We are all people and everyone does his job. This is a modern, functional organization in which everyone knows they are the right person for the job he or she does. The boss has everything under control, but cannot be an expert for design, logistics and engineering tasks. This interaction makes us strong in so far as we practice it in the west. Otherwise we would lose against the Japanese. They're so strong because they have a goal and team spirit.

Net 'n' Nest - it sounds like rock 'n' roll. Where's the rock ‘n' roll in this concept?
Cohn: In the nest. There you can listen to music. Rock ‘n' roll if you like. In the ‘reset' areas I should be free and refresh myself. But let's take a completely different example. If you are in an Islamic country and your counterparts go off to pray - they come back refreshed. For our part, we just sit around all day. 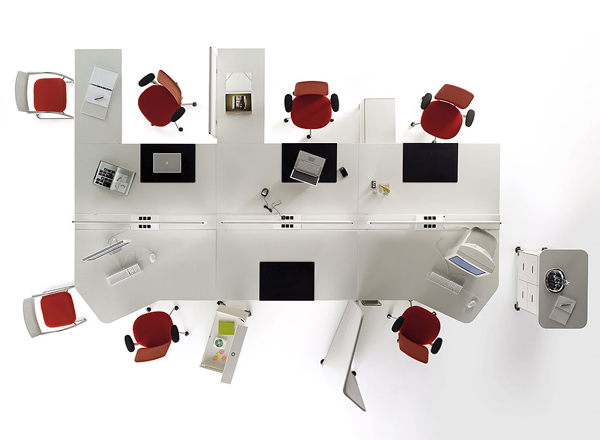 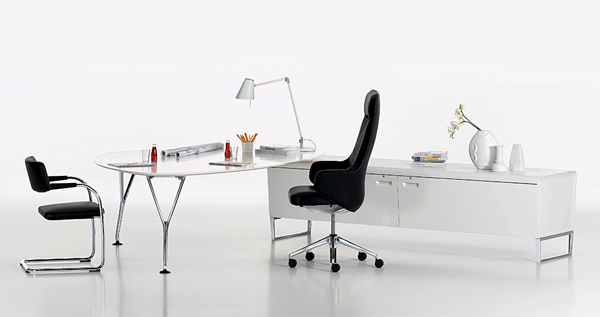