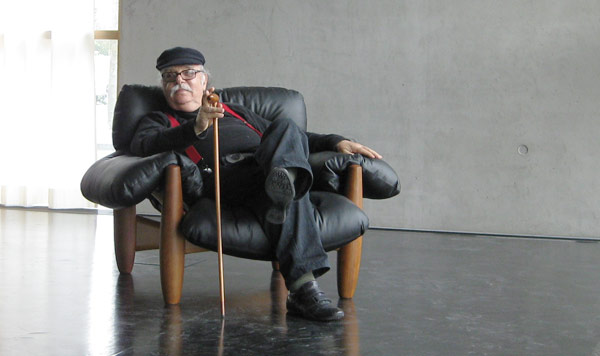 He is a Brazilian superstar. Idolized at the Salone in Milan, wherever he goes and wherever he stands, South American fans want to have their picture taken with him - Sergio Rodrigues. We caught up with him at ClassiCon in Munich, took a seat in his squashy leather armchair "Mole" and talked about his life.

Mr. Rodrigues, in 1961 your armchair "Mole" won first prize in the international furniture competition in Italy. How did this honor influence the sale and distribution of your armchair?
Sergio Rodrigues: On the one hand this honor naturally had an effect on my personal life. Winning an international award outside Brazil had a special significance for me and was hugely important emotionally. On the other hand, not only have sales of the armchair improved, but also interest in Brazilian furniture in general. Many people have founded their own studios. I had a company at that time called Oca. "Oca" means Indian house. Then my company started producing the armchair.

The widespread popularity of the armchair also attracted people's attention to modern, Brazilian design. How do you explain this interest at a time when the design avant-garde was propagating a completely different formal language?
Rodrigues: I even ask myself why the award went to someone who works with wood and leather as opposed to another designer who works with much more valuable and technically advanced materials than me, such as aluminum. I explain it to myself like this: The process of globalization was already underway in the 1960s. The award was bestowed at a time when regional materials were becoming more important and designers wanted to contribute to strengthening the regional area. Basically it was the first stage after Postmodernism, returning to regional values.

Since then, the armchair has symbolized your design.
Rodrigues: I am my own client and I make the things I want. With this design, I wanted to upgrade Indian culture. I thought that if I honored the Indians with it, I would have contributed to strengthening Brazilian nationalism.

Does the continuous association with your armchair "Mole", which has not faded over the years, bother you?
Rodrigues: No, on the contrary, I think it's wonderful, because it is a form of recognition of my work. And in the end also of national recognition, for my intention was not to assert my style or make a name for myself. Rather, my design concerns original culture, and the Brazilians have recognized that.

You are often described as an ambassador of modern, Brazilian design.
Rodrigues: This designation has probably come about because I work with the history of Brazil and the spirit of the Brazilians.
For example, I observed Indians playing a game with wood. That was my inspiration for Mole. Basically the armchair consists of just four pieces of wood and leather. It has to do with the Brazilians' spirit.

What were the decisive moments and turning points in your life?
Rodrigues: The turning point was the award. I mean, just imagine, people called the chair a dog bed. It was in the display window and although people looked at it, there was no response, no-one wanted it. There really was hardly any interest in the design at all. People saw the chair as an exhibition piece and not an item of furniture. They did not see that it has something to do with style and design. I believed in what I produced, but the people did not believe in me. So the prize helped me carry on. I believe in the spirit in Brazilian culture and my task is to find out what forms it takes.

When you compare cultural developments in Europe and Brazil, where do you see differences?
Rodrigues: The difference is that Europe has always enjoyed liberty, except during the Second World War. Brazil did not have that privilege. In the 1950s creativity had a free reign, but then a military dictatorship ruled from 1964 until 1985, which did not put a stop to all creativity, but obstructed it with its censorship. From 1985/86 society started thinking about what they had back then. That is Brazilian. That is currently the renaissance in Brazil's creativity.

If we observe your designs, they are intended more for a small elite group. Do you wish your design were more democratic?
Rodrigues: Yes. Initially my furniture was not for selected individuals. My clients were people who understood what I made. Over time I naturally wanted to make my furniture designs accessible to the wider public. That is why I founded a company in 1963 called "Meio grana". "Meio" means half and "grana" money. It produced well-designed furniture on a large scale, but I had to withdraw from things after a dispute with the company. As an architect, I have always kept in mind that good design should be accessible to everyone. That is my motto.

Brasilia is considered one of the few urban utopias that have been created. As a trained and practicing architect, perhaps you can offer your opinion on the city's shortcomings. Why doesn't it work?
Rodrigues: The city is wonderful, but the politics do not work. The city is isolated from Brazil's actual center, namely Rio, and that is why it is difficult to realize this idea. When something does not develop naturally, it isolates itself, because it was forced and thus was unable to integrate itself into the larger, already existing network over the course of time.
It is a questions of politics. It was necessary, but the people were against it. They did not want to be forced to move. In a country as large as Brazil (it is almost as large as an entire continent) it is difficult to move a center of power. The idea was fantastic, but it was difficult to realize.

You are witness to an exciting era. Is there someone who has made a lasting impression on you?
Rodrigues: Nobody influenced me. Most Brazilian designers from that period went to Europe, had a look around, copied things and introduced them to Brazil. That did not impress me, because they were not original. But there was one person who really supported and helped me, namely Lucio Costa, Brasilia's urban planner. The architect was Oscar Niemeyer, but the urban planner was Lucio Costa. He told me I should continue on my path and that he would support me for as long as he was here. Lucio was not just an urban planner, he was an intellectual, philosophical figure.
I walked alone. There was no-one I could lean on, except in my private life. Vera is my wife. She knows me and always believes in me.