It lay like a greasy thick gray shroud over the city, obfuscating the view and bringing the traffic to a standstill: London's infamous winter smog gave rise to all sorts of tales before disappearing in the mid-1950s thanks to the Clean Air Act. Even today the British capital is still repeatedly associated with the meteorological phenomenon of fog. Japanese designer Nendo, for instance, has made it the theme of an installation, which he specifically names "City of Fog". It consists of hundreds of sheets of paper bearing sections of London city maps that, seemingly randomly fixed to the wall, form an impenetrable deep expanse.

"City of Fog" was exhibited in late September as part of "My London", a series of events launched by Established & Sons, in its showroom. It was part of the exhibitions for the 2011 London Design Festival, which this year took place for the ninth time and, alongside the increasingly uninteresting key event, featured the "100% Design" trade fair, which consisted of almost 300 fringe events strewn throughout the city. Although the nine-day design event does not match the major furniture fairs in Milan, Paris or Cologne, it has evolved into a platform for young talent that draws companies, retailers and collectors to the city every September to present to them new works from the local – and international – design scene.

Once again this year, the festival organizers staged lectures, debates and installations at the Victoria & Albert Museum in Kensington. Exhibits included "Textile Field", a 30-meter-long and eight-meter-wide fabric installation designed by Erwan and Ronan Bouroullec in collaboration with Danish textile manufacturer Kvadrat and proudly displayed in the middle of the Raphael Court. Elsewhere, at the Royal Festival Hall on the South Bank a temporary glass pavilion was presented in the context of "Size & Matter", designed this year by David Chipperfield. And Christopher Wren's St. Paul's Cathedral opened its southwestern, tower-like stairwell to an installation by London-based architect John Pawson in collaboration with Swarovski: A large crystal lens stood in the middle of the space on a reflective, hemispherical base; thanks to a second lens fixed to the ceiling it reflected the spiral staircase into infinity.

Yet once again, it was less the major, sponsored main attractions and more the small, essentially informal events that made the London Design Festival worth visiting, that revealed places which are normally inaccessible and showed the city from a different, more intimate side. Away from the V&A and well-established older showrooms the mood was more relaxed in South Kensington. Here, in Brompton as the district is known, dingy basement apartments, former restaurants, anonymous open-plan offices, abandoned military halls and old car repair shops were opened up thanks to the owner, who kindly made the properties available to young designers, primarily Royal College of Art graduates, for the duration of the festival. This patronage gave the creative minds the opportunity to approach their presentations in a different way. Instead of simply offering an insight into their current works, they took the opportunity of curating their own exhibitions.

For instance, one group of designers illustrated in a basement apartment the life of a fictional person called Vera, based on photographs found of an unknown woman. The Canadian Philippe Malouin, who lives in London, created an image of Vera's mother with the concrete shells, "1:4", intended to represent her maternal character: firm and rigorous. Spanish designer Tomás Alonso chose a photo with Vera on a horse and designed a luminaire, a tray and shelves from leather tack. In an abandoned Chinese restaurant Peter Marigold presented a series of 'wooden' vases in the "Methods of Imitation" group exhibition. Using small wooden strips, the British designer created a wax mold that called to mind the texture of wood, which he used to cast various plaster or metal vessels. In an unremarkable office building close by another collective showed works based on the observation of cities. London-based Israeli Alon Meron drew inspiration from the simple wooden slat fences often found in Great Britain and designed wooden shutters for the exhibition entitled "Multiplicity" that preserve the shape of the branch they are made from.Year for year it is these small exhibitions initiated by designers and not the organizers of the London Design Festival that, thanks to the work of figures on the local and international level, are not only a perfect reflection of London's diversity, but also highlight the difference between a design festival and a trade fair. After all, these are not just collections of objects, but well-conceived and highly individual stories that are told. 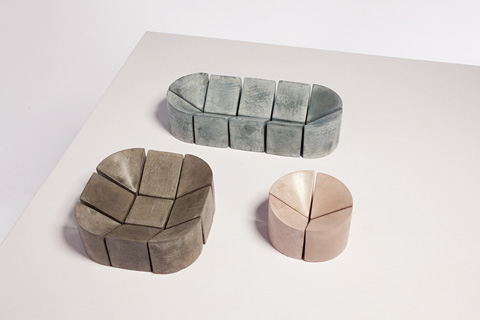 From the exhibition „Vera, Chapter One“, concrete shell „1:4“ by Philippe Malouin 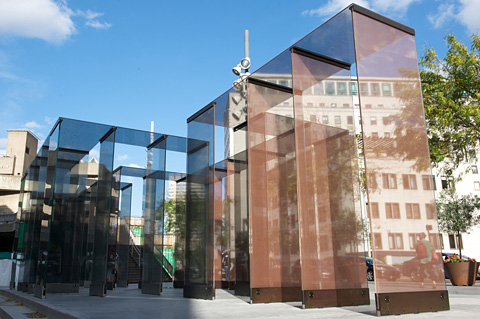 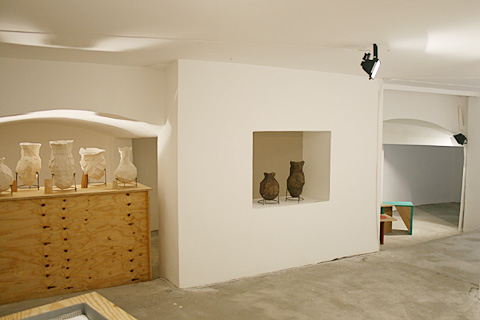 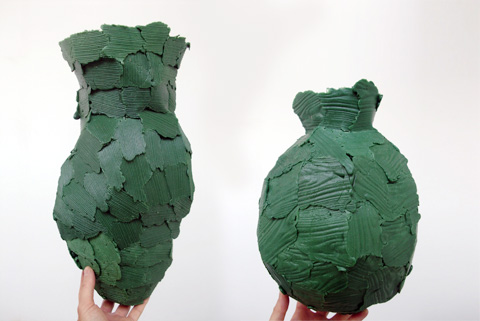 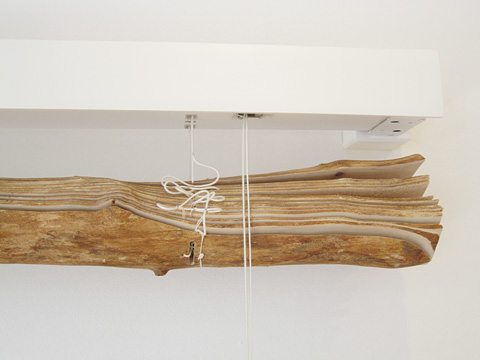 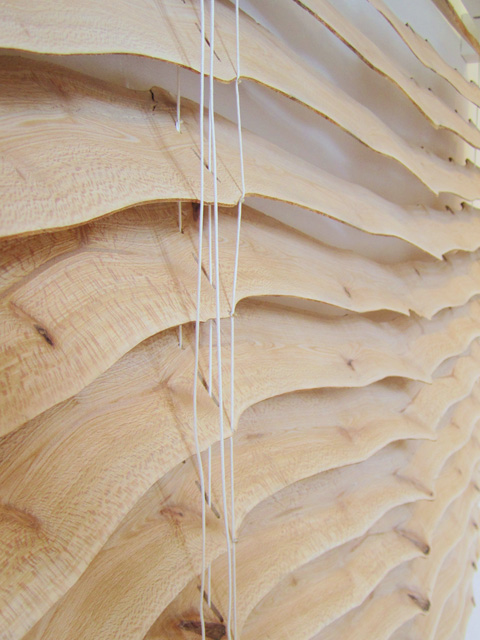 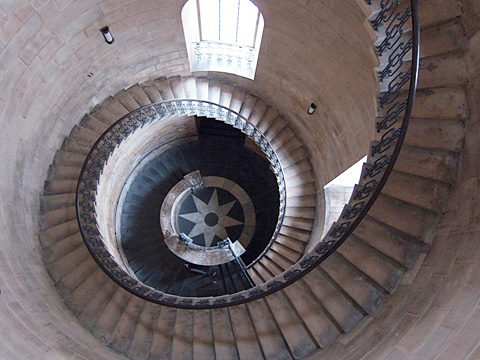 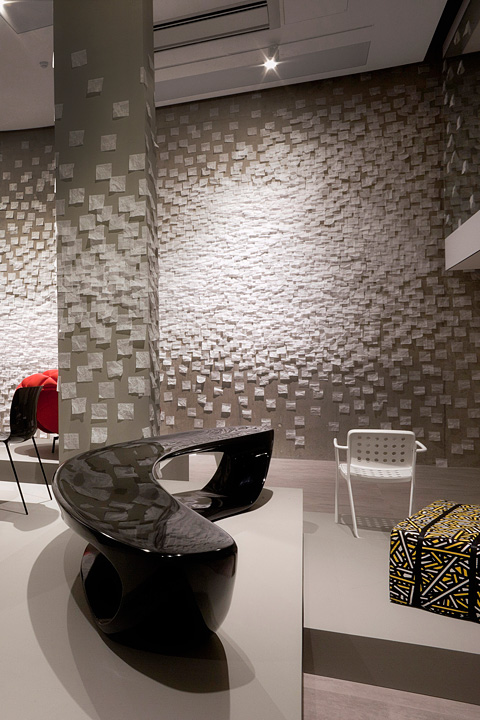 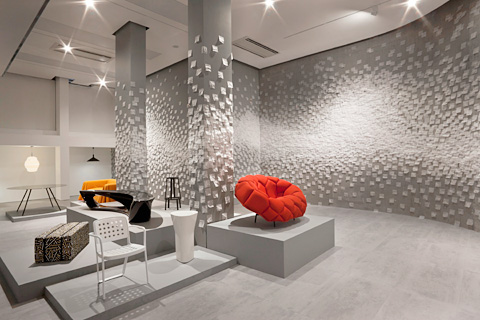 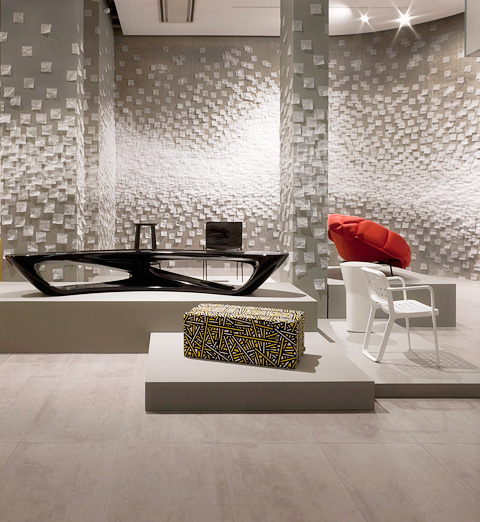 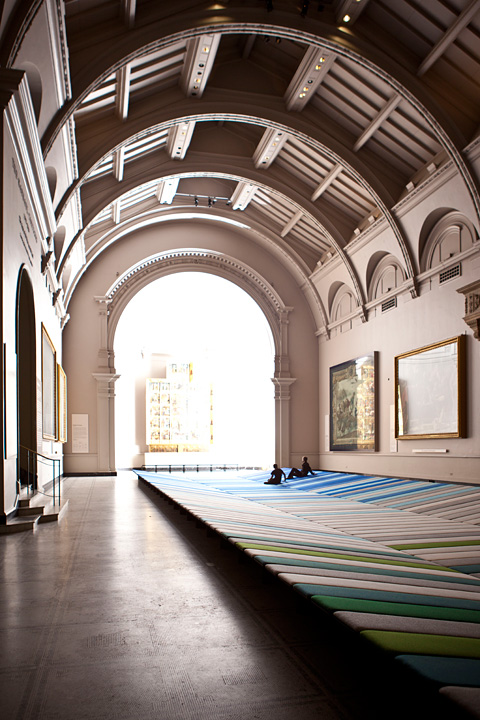 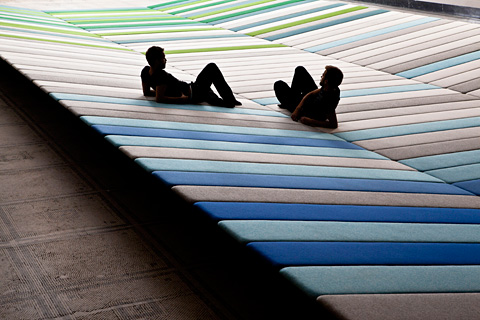 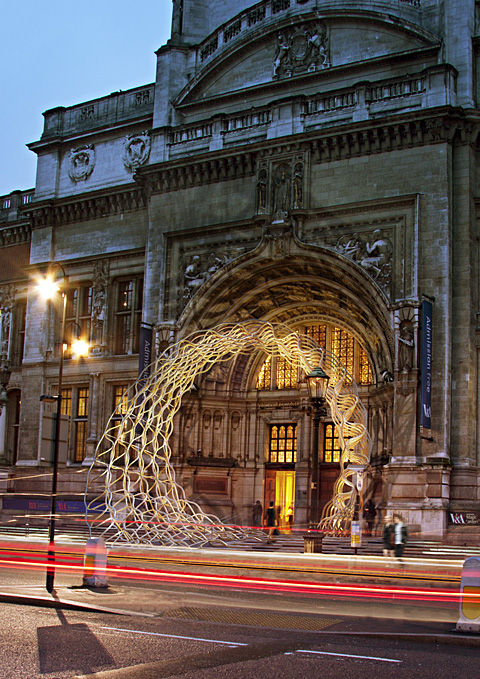 Installation at the V&A Museum by Amanda Levete Architects 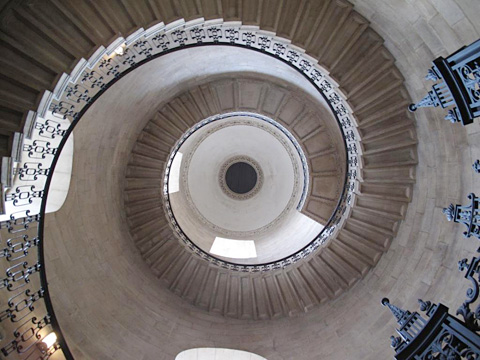 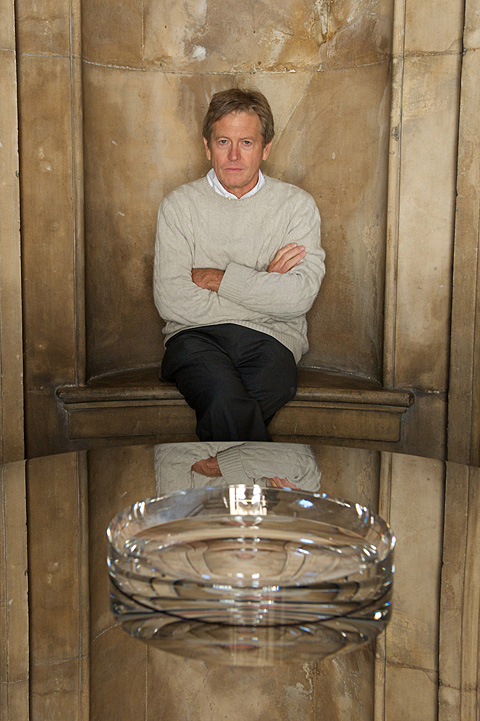