"He is greatest who has the energy to be naive," claimed René Crevel in a manifesto back in 1924. The Parisian Surrealists (and they include Crevel) may long since be history, but their belief in the power of dreams and the imagination strongly influenced the avant-garde of the early 20th century. Individual aspects of that attitude are definitely alive and kicking in the works of Fernando and Humberto Campana: The art-peaces, the furniture, installations and everyday objects created by the Braizlian designers stand out for their untrammeled creativity. Sensory appeal and ugliness, beauty and misery meld in their works and are expressed in their own intuitive approach, their blend of dreams and personal experiences. The two brothers do not allow themselves to be thrown off by conventional barriers or trends when exploring the boundaries of art and design, craftsmanship and mass production. Their naïve innocence and spontaneity - and for over two decades now they have relied on these qualities to tap new areas - makes them worthy successors to the Surrealists - and two of the most stunning figures in contemporary design.

"It would be wrong, in my eyes, to use software when developing an idea," says Humberto Campana, and Fernando, his eight years younger brother, adds: "In Brazil there is a great crafts tradition. We attempt to tap this potential in our work. We are both able to work with our hands and thus start out with life-size prototypes." Furniture made of cotton cords or paperboard, brush heads or drain heads have made the Brazilians' favela style famous in the international design community. Yet the Campanas originally wanted to become sculptors: Humberto gave up his job as a lawyer and Fernando started out studying architecture before likewise moving on to art. The feel for simple materials that they encounter on the streets of São Paolo has since become the crux of their work. This is also evidenced by less well-known, marvelously improvized pieces such as the "Estela" (1997) table lamp (two everyday non-slip mats hung over a thin steel frame) or the "Inflável" (1995) side-table, which consists of two pizza trays with inflatable PVC foil as the body. It's a one-off, like many of Fernando and Humberto Campana's designs, and was not commissioned by a client. Some of these one-offs, such as the famous Favela Chair, dozed away for years in Estudio Campana and were at most produced in small series by hands - until the Europeans discovered them and marketed them the world over in revised versions. Humberto Campana suggests that their approach is characterized by its "human touch". Here, craftsmanship and high technology, traditions and design are not opposites but complementary. "Hand-made high-tech," is how Fernando charmingly describes the method, with a smile.

"Antibodies", the first comprehensive Campana retrospective, has opened at the Vitra Design Museum in Weil am Rhein - highlighting both sides to the brothers' work - the art and the design. Curator Matthias Schwartz-Claus has relied for several years on the support of Estudio Campana in São Paolo and has succeeded in bringing together a large number of unknown and never-exhibited one-offs and prototypes, collector curios and mass-produced items. The show thus offers any number of different perspectives on their oeuvre to date, which has a quite astonishing reach. Furniture and costumes, refined vases and sculptures, supplemented by films and slide shows that present the background and various sources of inspiration. The carefully curated display offers a clear overview of the 200-odd exhibits systematic structured in terms of such labels as organic shapes and knots, curved surfaces, and objets trouvés - and rounds these out with found and collector items from the Campanas' archive. In this way, we can peruse a colorful kaleidoscope that brings together the different periods in their work, from the 1970s to the present, highlighting continuities along the way. The hard-edged exhibition architecture, designed by Studio Groenlandbasel, create the right distance to the exhibits, forming a sober frame for the organic shapes, which are often inspired by nature. An installation of PET bottles, purpose-built for the exhibition, sheds iridescent light in the VDM's stairwell. An inspiring retrospective that stands out sharply from the ever more frequent designer shows that now tend to be curated by the respective designers themselves and are driven by marketing considerations - and an imposing sign of the 20-year history of the Vitra Design Museum.

In the inspiration jungle

Kaimans, giant boa constrictors, carnivorous plants - the Campana brothers love them, all these dangerous creatures from the Brazilian jungle that embody the ur-dream of unchained nature. The designers have even taken some of their jungle and ocean fantasies to the point of serial produced items. There's the Boa sofa (2002) for Edra - a velvet monster made of 40m long pieces of hose-pipe spanned by the muscle-power of four men. And there's "Drosera Copper" and "Drosera Velvet" from the 2007 Vitra Edition - two wall-mounted bags whose storage space is accessed via a slit reminiscent of the mouths of plants. The reference to nature is most convincing in the objets trouvés that transpose everyday found objects into the design context. The "Naturezza Morta" room divider is made of a thick stack of black pieces of coal, while "Cerca II" is a paravent that requires no high-tech, as it is made of simple willow rushes. "We give simple and everyday objects a new lease of life, a new meaning," is how the brothers describe the method - and they are past masters of it. Their idiosyncratic and unmistakable design vocabulary hinges on simple materials that tend to be unusual in the furniture context - a thick cotton cord is used for the "Vermelha" armchair, and simple wooden leftovers are used to create a veritable throne for the Favela armchair, creating an impressive monument to the impoverished districts in Brazilian cities. Humberto Campana believes this all has to do with the poetics of life, which involves beauty and ugliness, body and antibody - a contradiction that in many ways influences the Campanas' aesthetic. The designers smile wanly when mention is made of the fact that the Favela armchair has for some years been produced by German cabinetmakers in South Brazil, hand-assembling the individual parts ready for shipment to Europe, only to be re-imported at European prices into the Brazilian market. Such discrepancies are the very lifeline of their work.

The brothers work to blend cultures, the chaos of South American streets with European perfection. Their approach is defined by improvisation - "to be creative means to enjoy things," claims Humberto Campana, "even if the world is truly somber." Their works attest to a balancing act that combines continents and materials, and all the paradoxes this involves. Thus, the artistic handmade shell mirror frames Humberto Campana created in the 1970s are a far cry from the famous editions of recent years, such as the limited Sushi armchair or the provocative Banquette armchair, where you can sink into a niche made of soft toys. That said, the Campanas have always remained true to the antibody principle, to skilful displacement of materials. Their experiments and collages link craftsmanship and mass production, the invaluable and the quotidien. Thus, the hand-blown Venini glass bells in the "Campane di Campana" (2005) installation hang from course, rough hemp ropes. And the hybrid nature of the "Una Famiglia" (2006) seats (again one-offs) combine traditional wickerwork and the remains of cheap plastic chairs to create a functional and aesthetic result - as beautiful as "a chance encounter of a sewing machine on a dissecting table," to quote Leautrémont.

The culture of appropriating contradictory elements and the unshaken faith in life has made both brothers famous as ambassadors of Brazil. And their collaboration is shaped by this mind-set, as the history of the "Negativo" and "Positivo" chairs shows. Humberto Campana was white-water rafting in Arizona in 1988 and dreamt of a spiral-shaped Native American drawing that sought to gobble him up. The next day his raft capsized and he almost drowned. Back in São Paolo the response to the experience was "Negativo", a steel chair with a backrest from which a spiral shape has been cut. Fernando then used the spiral itself as the backrest for his own chair design, which he called "Positivo".

Spontaneity and imagination, craftsmanship and design meld in the Campanas' oeuvre in a contradictory and powerfully poetic approach. This poetry comes most fully to bear when freed of the need to deliver structure or function - in pure art. In the preface to the first issue of La Révolution Surréaliste we read that "Oh, if bones could be inflated like dirigibles we could float over the depths of the Dead Sea." Fernando and Humberto Campana explore the depths that the Surrealists sensed back in the 1920s. And yet their refreshing work remains astonishingly tangible and real. 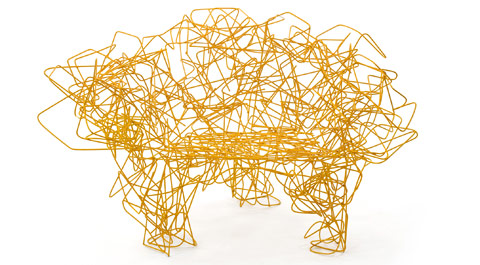 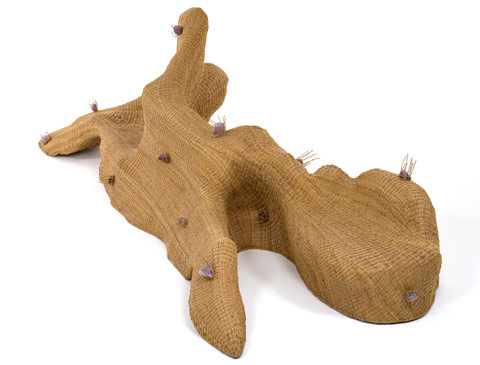 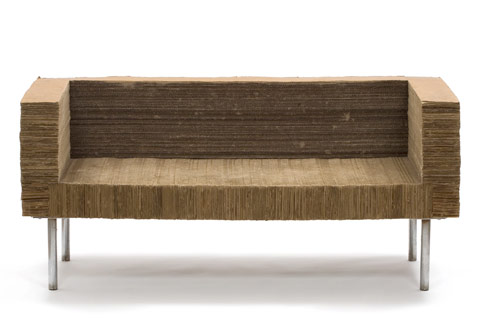 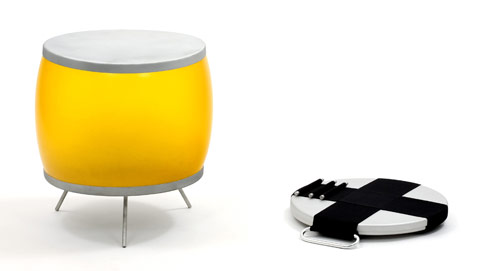 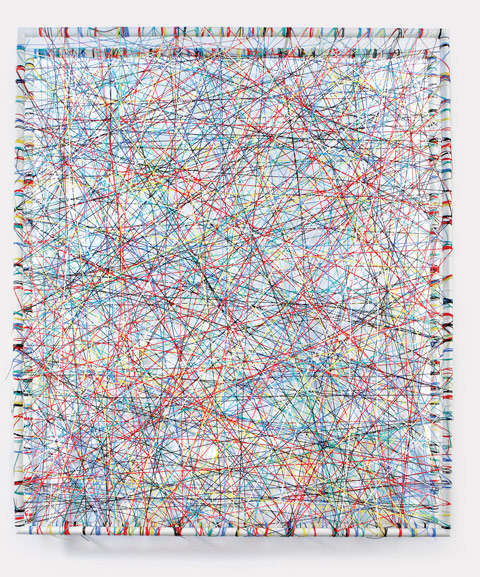 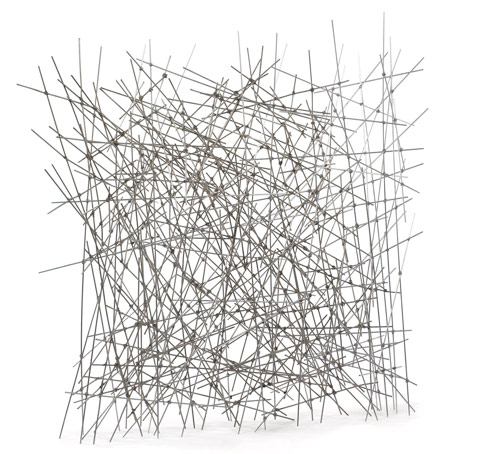 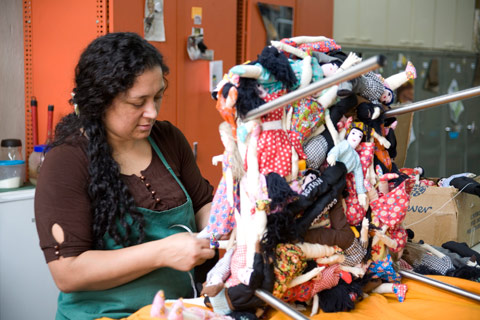 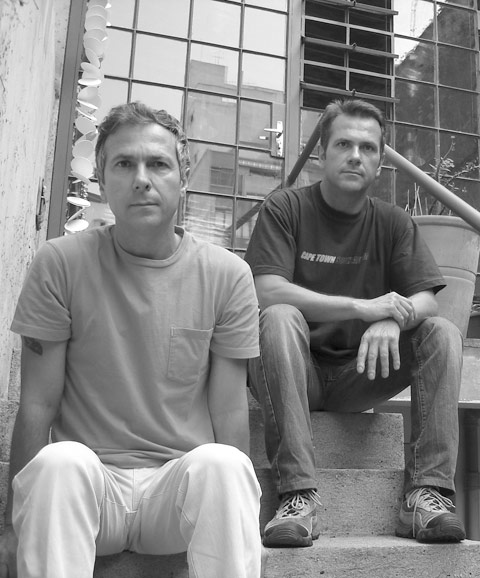 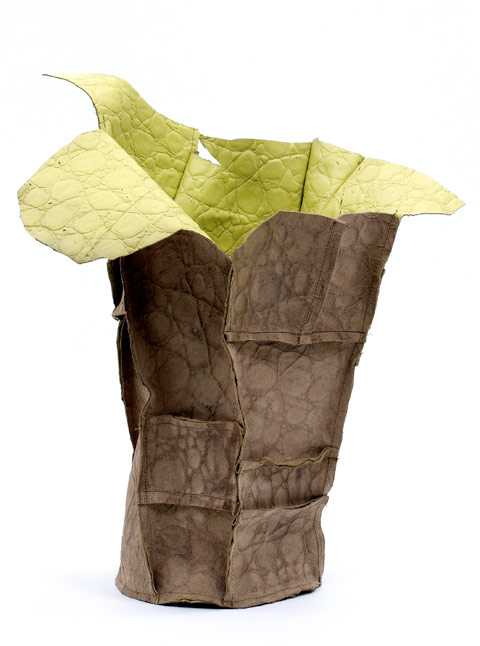 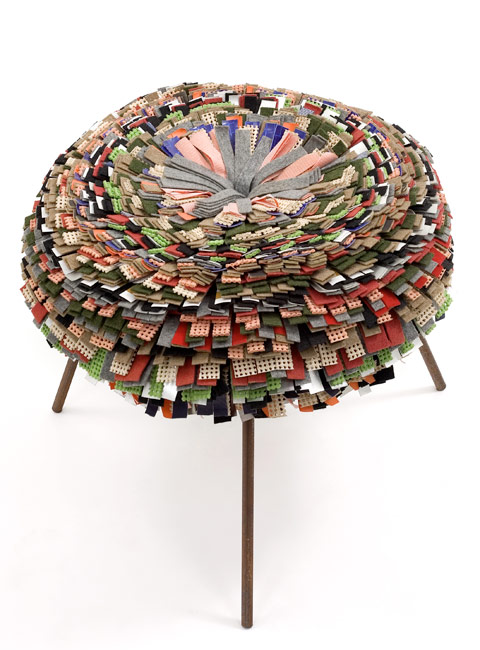 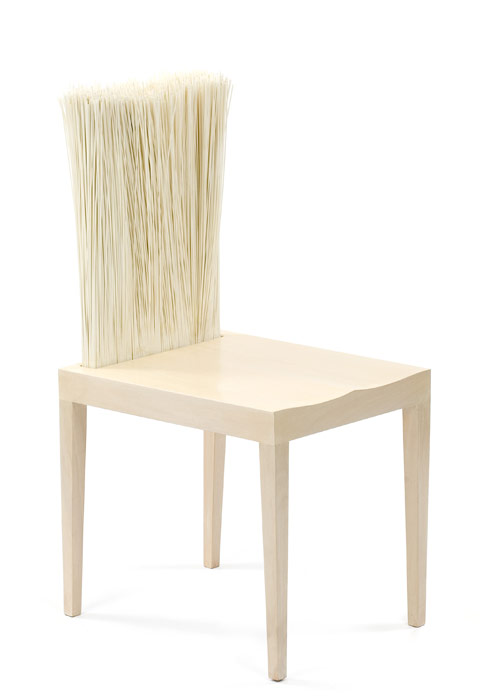 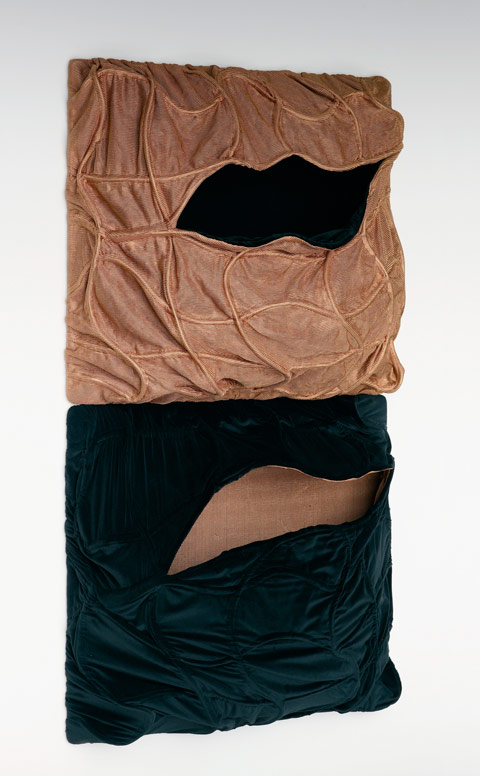 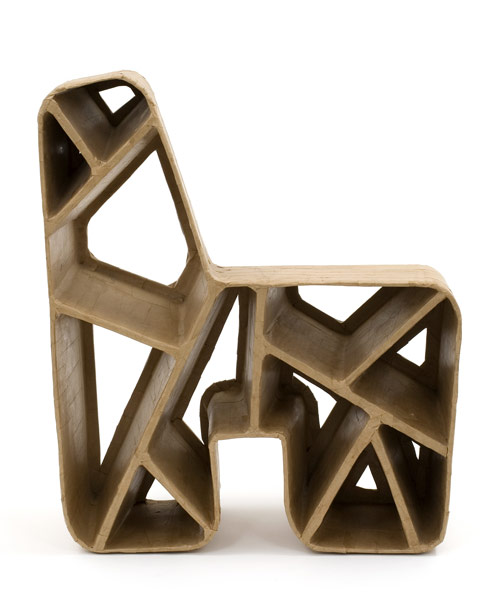 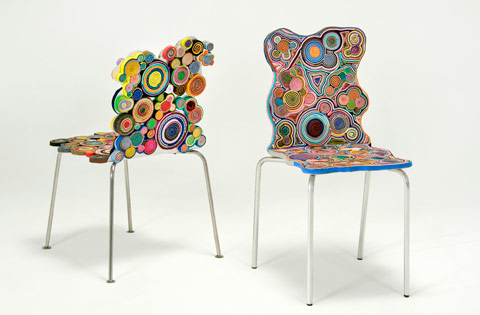 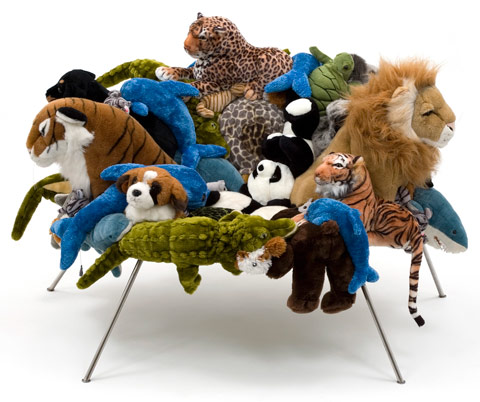 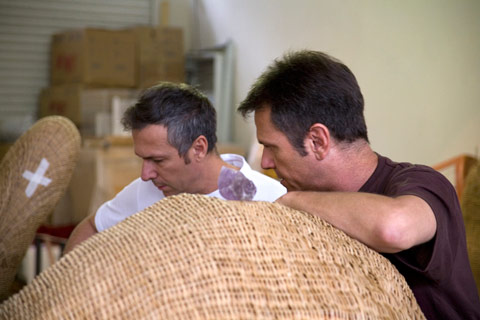 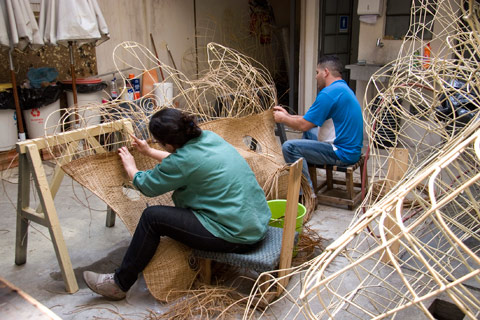