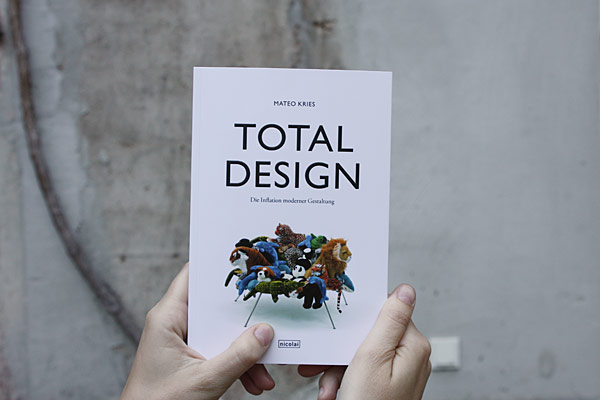 To cap it all: After climate change and killer viruses, the economic and financial crisis, the end of privacy and the consequences of demographic change, we now have to face a new, previously underestimated danger. For a long time, we have been living in a "design society" that affects all areas of our lives and leads to an "inflation of modern design". The danger is called "Total design", and by this we do not refer to the Dutch design studio of the same name, founded in 1963 by Wim Crouwel and Friso Kramer together with other typographers and product designers to receive lucrative multi-disciplinary jobs from large companies. Mateo Kries is known as a clever and level-headed mind and curator of large and important exhibitions dedicated not to mainstream but interesting side issues in design history and contemporary design, such as "Home cultures in the Arab world" and Le Corbusier, not to mention his studies of the German applied arts movement,, about the life and work of Joe Colombo or, recently, Rudolf Steiner. In cooperation with other authors and exhibition organizers, Kries has always shed light on new findings, detected links and expanded the knowledge that already existed. Now the man who managed the Vitra Design Museum in Berlin from 2000 to 2006 and is presently the Chief Curator at Vitra Design Museum in Weil/Rhine has cast a critical eye on the new and supposedly exaggerated role of design.

It is one of these books that warn us, yet you cannot tell at first whom it actually wants to make feel bad. Is Kries reflecting on his own role as a cog in the big wheel that tries to attach meaning to current design issues? In the first two sections of the book, "Aufstieg" (Rise) and "Generation design", a concise history of design starting in 1900 is intermingled with the living conditions of Mateo Kries and his family. He moreover includes statistical data about the economy and demographic trends, but also uses the term "design" for eras in which we were still a long way from using it. The rapid rise of design in all areas of life, or so he plausibly argues, has been accompanied by increasing superficiality and reduced content. The chapter "Generation design" reminds us of Florian Illies' book "Generation Golf", which appeared in 2000. Illies tells stories about brands, furniture and home accessories of a life in which the self-design of those who were born between 1965 and 1975 is reflected through brands, products and advertising slogans: "Where do I come from? Where am I going? And why does my Golf know the answer?" Illies quotes from a 1990s VW commercial and, not without self-irony, admits to happy consumerism: "Buying a particular piece of clothing, just like reading the work of a particular writer in the past, has become a philosophy. The products I buy express what I think. Or rather, the products I buy express what I want people to think about what I buy. ... It is insane, but we really believe that by wearing the right brands we can show what class we belong to."

Mateo Kries has put it as follows: "The reason why we are currently discovering design as a new maxim of life is that things were not alternative enough for our parents. That is why we can perfectly distance ourselves from them through our new materialism."

In the first sentence of the preface he discovers the "we" for himself, but keeps slipping back into the role of the sober chronicler time and again: "20 years ago, no one would have thought that design would play such an important role in our lives today." Is this true? It was precisely in the 1990s that part of the design community pushed for a marriage of convenience with marketing, which many designers hoped would lead to greater influence and a better status. The profession which had until then been considered artistic and chaotic rather than research-oriented and systematic was about to change. "Design is an economic factor", many business-minded supporters of design preached back then, meaning, let us finally make big money! Large, globally operating design studios were founded as a result. This was a new model for it was not about offering different skills, which was still true in the case of the "Total design" studio, but positioning oneself as corporate consultants. A business model which soon disappeared. Today, design is often in the grips of marketing, which has long since set the targets. Design is an economic factor, and yet, companies are led by engineers, financial experts and lawyers. On the other hand, nowadays we have trouble finding a designer, let alone a female one, on a company's board. This, too, is an indication of the real status design has in our society.

Kries' perspective, on the other hand, also includes genetic engineers, producers of trash TV and Botox users. They all provide the world with the kind of design we did not even dare dreaming of twenty years ago. Notwithstanding the enthusiasm Kries shows in his argumentation, some of the mistakes the editors have overlooked are simply annoying. For example, it is complete nonsense that Max Bill "founded the Academy of Art and Design (Hochschule für Gestaltung, HfG) in 1955 together with several colleagues, among them Hans Gugelot and Dieter Rams" (p. 35). The college was founded in 1953 and moved into its new premises, masterminded by Bill, in 1955. Inge Aicher-Scholl and her husband Otl Aicher were the founders, while Bill was the founding rector and an important source of ideas. Dieter Rams, who was 21 at the time, joined Braun as an interior designer, and it was soon thereafter that he cooperated closely with Hans Gugelot, who taught in Ulm, Germany. Rams was neither a student nor a lecturer or co-founder of the HfG. Raymond Loewy published his memoirs in 1951, not in 1954 (p. 32). Their German title "Hässlichkeit verkauft sich schlecht" (Ugliness does not sell) was ingenious; however, it was not Loewy's idea, for he gave his book the title "Never leave well enough alone". We may also wonder why the space enthusiast, photographer and advertising designer Charles Paul Wilp is renamed as Michael (p. 37) and why Apple Chief Designer Jonathan Ive is suddenly called Yve (p. 48 + 66.).

The question of whether and how design can actually contribute to our lives is addressed in the final chapter "Gegenentwurf" (Alternative proposal). Cautiously, Kries presents alternatives, he reports from different places in the form of diary entries and, in so doing, adopts different perspectives. Just like the financial sector, "the system of design has been developed on credit ... and with a focus on the wrong priorities".

The art historian and sociologist disapproves of the solutions suggested by some designers, for they are all too simple and unrealistic. Protecting the job title as in the case of doctors or lawyers would hardly improve the situation. The same holds true for abandoning the short, impressive and yet meaningful term altogether, which is what some designers propose. It will probably not be possible to apply the old credo "less is more" to design. The author also rejects the possibility of crude categorization along the lines of "good" and "bad design". Ultimately, Mateo Kries thus propagates intensive and high-quality interaction on design, names journalistic forums, and points out Stylepark in particular as a medium of reflection. In the end, the rapid devaluation, the "inflation of modern design", can only be tackled with a different notion of design that has been forgotten, a design that is not newer or more spectacular, but simply useful. 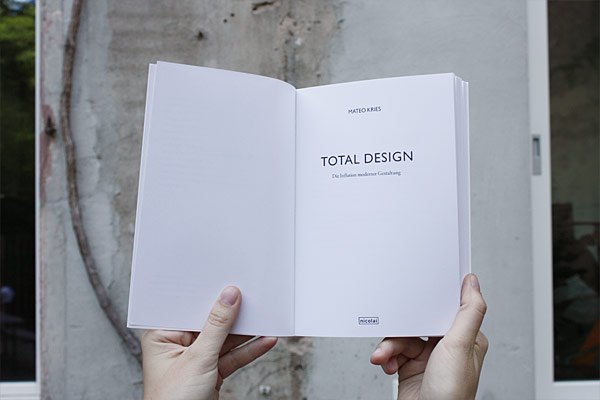 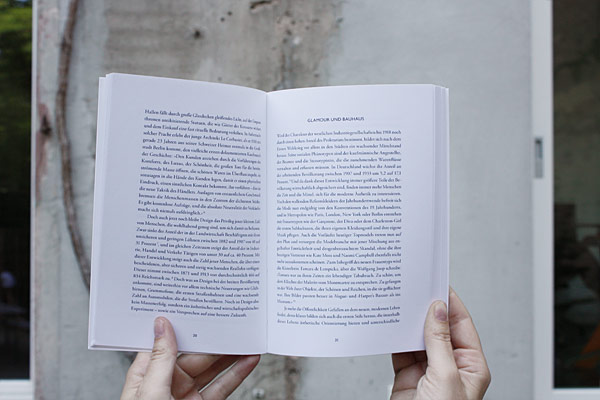 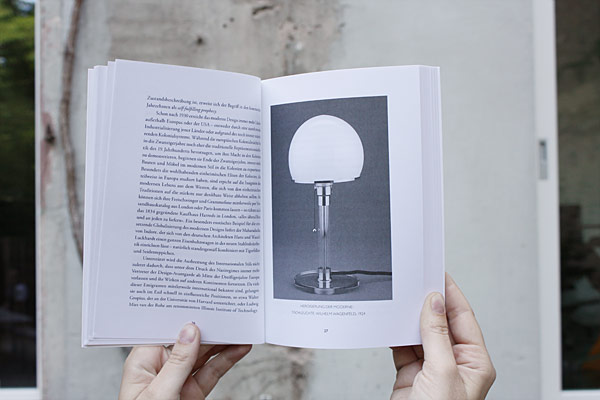 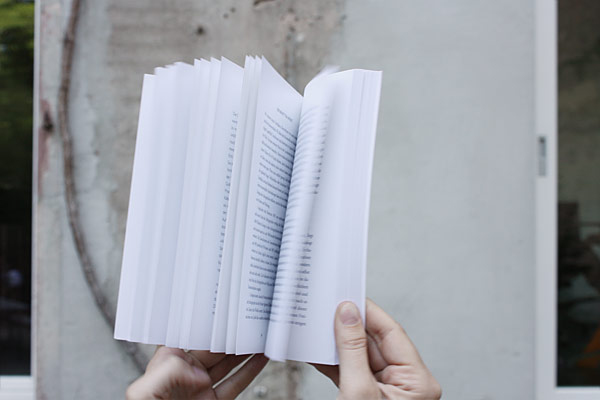 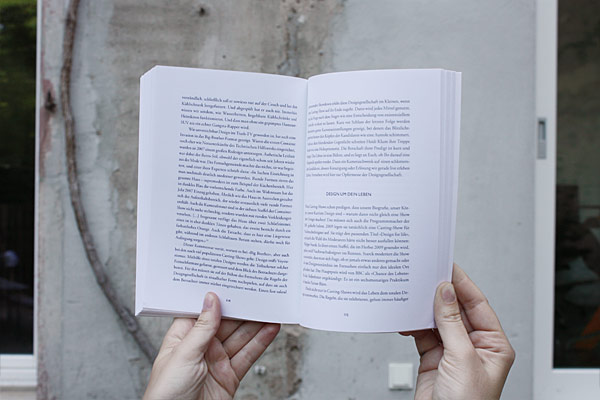 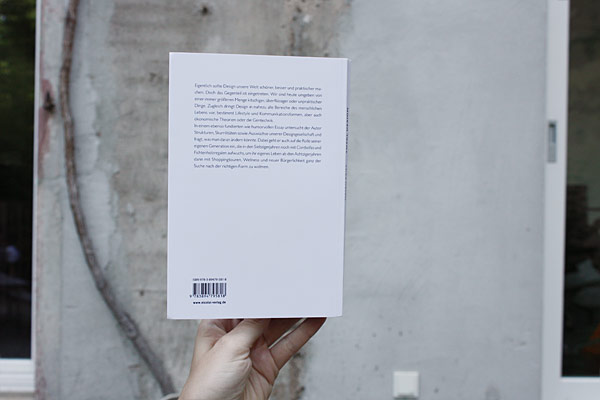