"I don't care if it's Milan or Madrid – as long as it's Italy!" the footballer Andreas Möller once said. His comment is unforgettable, not least because in passing it makes Italy the real winner. And even if Inter Milan's exit from this year's Champions League means that Madrid is in with a good chance, Milan is the secret winner nonetheless. Neither the football disaster nor the Ruby trial against Berlusconi could dent the impression the city makes during Salone week. The fashion Mecca's flair is ubiquitous during the furniture fair as well. Downtown the fashion label's major flagship stores traditionally clear their display windows to make room for the furniture designers, even the likes of Borsalino exhibited illusionist hat installations by Piero Lissoni, while labels such as Missoni and Diesel have long since made the leap from catwalk to trade fair grounds or the Zona Tortona. Hermès fashion house held a special surprise in store at this year's Salone: The French label launched its Maison furniture line which, rounded out with fabrics, rugs, wallpapers and porcelain wares, has all the ingredients to fully furnish any interior space. Hermès Maison presents itself as a tasteful luxury outfitter for all living environments. The top notch for living was showcased in a befitting setting – at Pelota hall and a pavilion by Shigeru Ban.

Luxury with a serious sense of style

In the temporary exhibition space, cardboard and laminated wood combine to produce an elongated building within a building complete with a gabled roof, whose outer appearance anticipates the orchestrated living comfort inside. A suite composed of several rooms opens up inside the pavilion, their fluid transitions forming a complex interior. Sofas complete with side tables furnish the living room, partitions separate different scenarios, while at the end of the tour visitors encounter a bedroom fitted with heavy fabrics featuring traditional patterns. The haute monde of luxury fashion has entered the world of furniture. French designer Jean-Michel Frank's 1930s designs are supplemented with travel furniture from the "Pippa" collection. The range was completed with new chairs, loungers, tables and sofas from Enzo Mari, Antonio Citterio, and Studio RDAI or Rena Dumas Architécture Interieure.

In this stylishly conceived universe it is hard to tell the difference between old and new. There is no eclectic style mix to be found, instead the accuracy with which contemporary designs have taken their cue from Hermès' expertise and tradition in leather finishing, and in so doing reference the design language of Jean-Michel Frank, is truly amazing. Accordingly, the surface of Enzo Mari's side table "Storage Coffer" is made of Caneletto walnut marqueterie – citing the former's straw marqueteries used in his historic screens and side tables. The table frame transpires to be a fold-out trunk, whose soft bull's leather skin reveals impeccable seams that resemble precious engravings in leather. Enzo Mari's chair likewise picks up simple forms such as the oval shape for the armrest, joins seat and backrest to form comfortable units, and celebrates a quality of comfort that also has its roots in the "fatto a mano".

Antonio Citterio's designs are likewise intended as a reprise of a design potential steeped in tradition. Made of fabric or leather, the sofa upholstery rests upon an oak frame, whose helically shaped legs likewise feature in the chaiselongue and the accompanying tables, reminiscent of Egyptian and Greek folding chairs, as well as the "Pippa" collection made by Rena Dumas and Peter Coles in 1987. In particular the intersections, where metal, leather and wood come together, reveal a love of detail that is hard to top.

Hermès Maison is evidently propagating a universe of comfortable, stylish furniture – Jean-Michel Frank's heavy lounge chairs boast timeless elegance as do the new designs. Overall, this living cosmos exudes serenity and conventionalism. That said, singular highlights such as those by Enzo Mari and the leather-covered side tables by Jean-Michel Frank are truly impressive.

As early as the 19th century, the Hermès family-run business earned its reputation with suitcases and bags made of leather, with hand-printed silk scarves featuring equestrian motifs completing the range as of the 1930s. Today the company can look back on a long tradition comprising well over a thousand motifs for its carrés and celebrate the success of items such as the "Kelly Bag" which, designed in the 1930s, adorned Grace Kelly on a 1950s cover of "Life". The trend is now to continue in furniture. It is no coincidence that Hermès purchased the licenses for the furniture of Jean-Michel Frank – Charles-Émile Hermès was friends with the French designer. Along with their boutique in Rue du Faubourg Saint-Honoré in Paris Surface, Frank & Chanaux became famous for their unusual furniture materials using high-quality leather and skate skin. With his rectilinear designs Jean-Michel Frank outfitted apartments such as that of Nelson Rockefeller, planned the studios of fashion designers, commissioned Alberto and Diego Giacometti with decorative objects as of the 1930s and became the talk of town with his extravagant hotel furnishings. After fleeing from the Nazis, the son of a Jewish family of bankers relocated to Argentina and later New York. In March 1941, aged 46, he jumped from the window of his Manhattan apartment. Today his furniture designs are regarded as rare collectors' items that fetch top prices at auctions at Sotheby's and Christie's – and are now being relaunched by Hermès in a big way.

Bull's leather, fabrics featuring illustrative Indian patterns, straw marqueteries, walnut and brass feature on the list of high-quality materials Hermès has assembled for its articles for the home. The company's tradition in craftsmanship, its finishing techniques for leather and fabrics, along with the singular patterns now constitute the brand's image in furniture as well. The rugs are hand-knotted – using silk from the Dandong region in northern China. Travel and equestrian motifs that formerly adorned Hermès silk scarves and porcelain can now be seen on wallpaper, demonstrating the philosophy of a company that blends comfort and convenience with old-established decorative patterns. There is no room for experiments in this cosmos of living. "First we like to sit down, then touch, before we infuse the object with life," says Antonio Citterio, describing the emotional experience of his sofa, which, together with other new furniture designs, forms part of the "Matières" collection. The items are produced by such reputable manufacturers as B&B Italia; however, neither is this openly communicated nor are these companies involved with sales. The objective, after all, is for Hermès Maison in future to be sold in Hermès stores world-wide. There the high-end objects will come across an audience that finds travel bags to perfume, and wedding dresses to living room interiors – complete with the matching wallpaper. 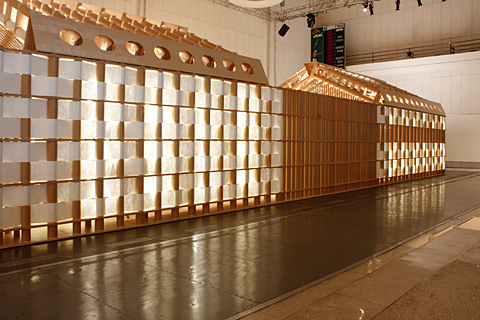 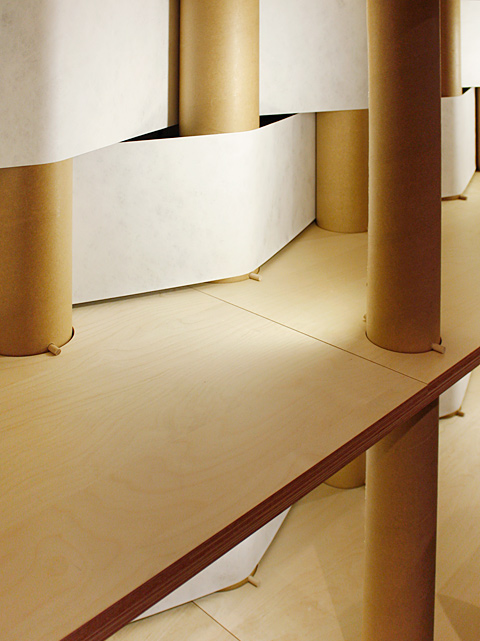 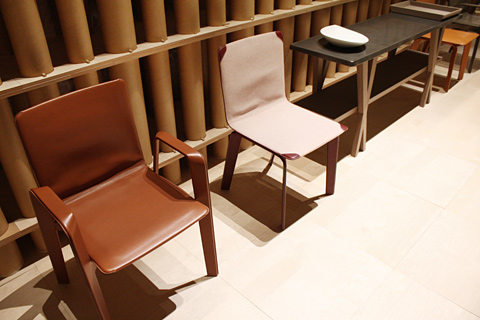 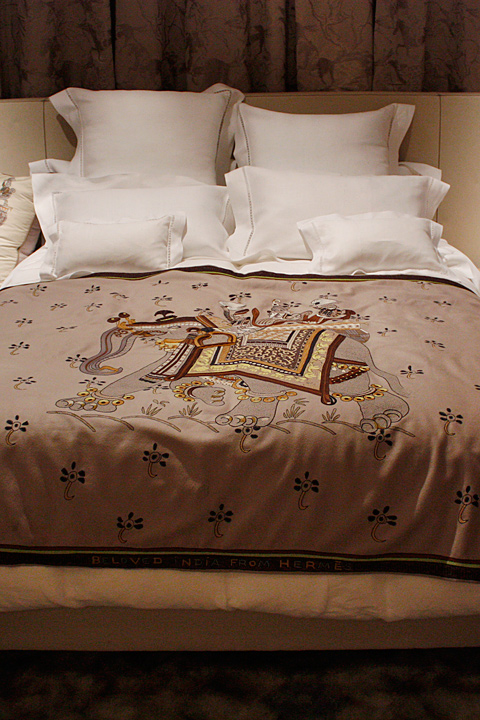 Coverlet with a design by Philippe Dumas 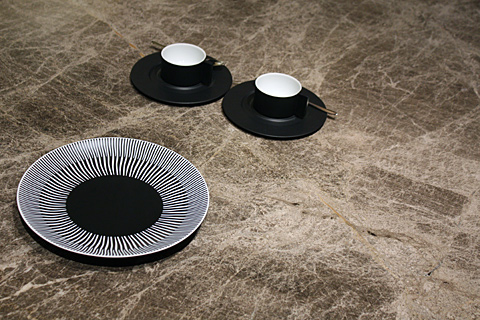 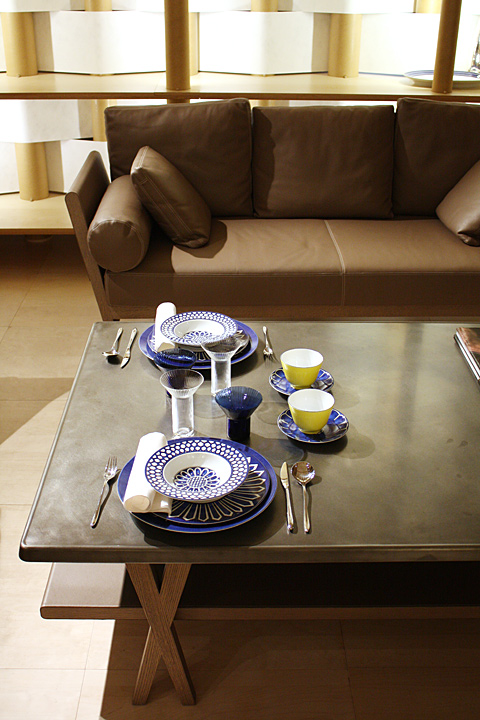 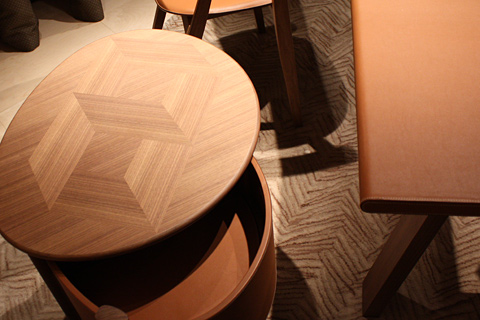 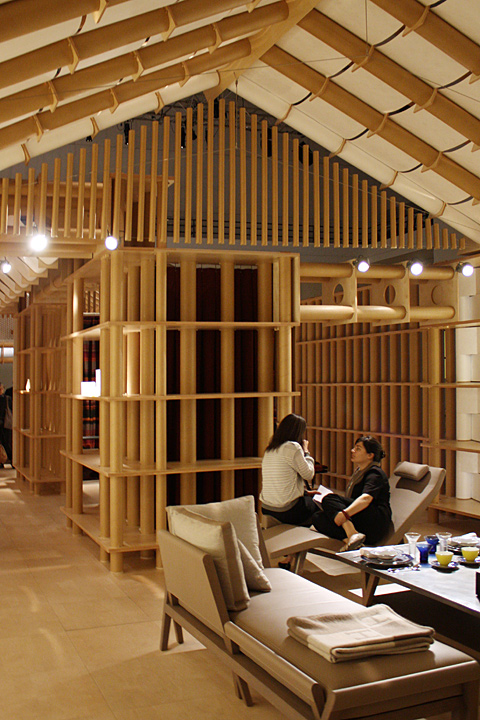 Pavilion by Shigeru Ban in La Pelota in Milan 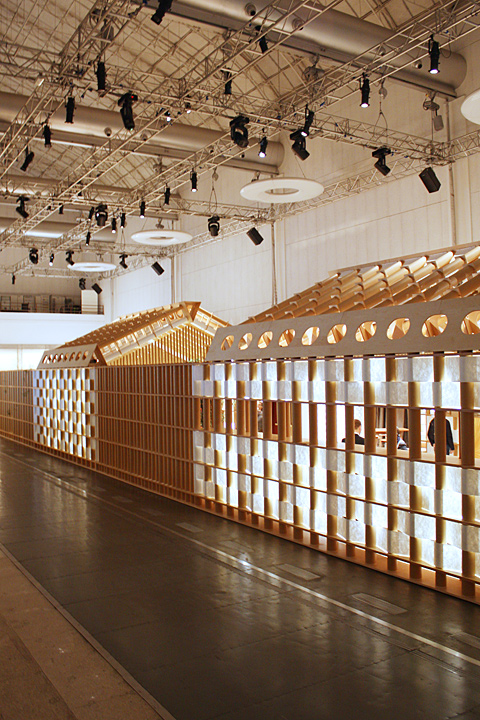 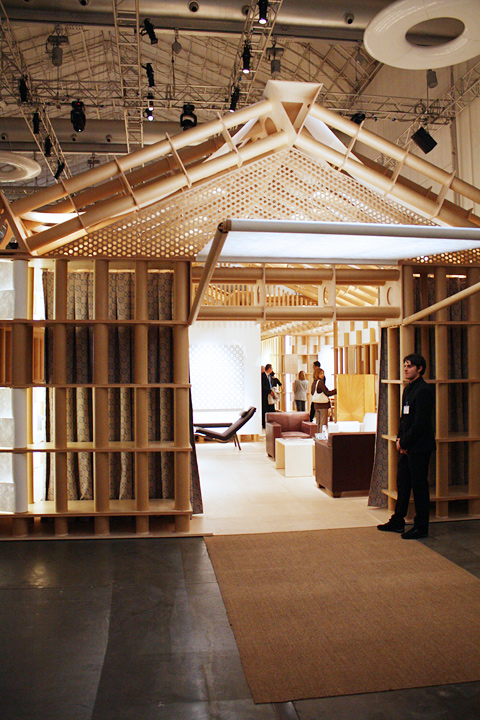 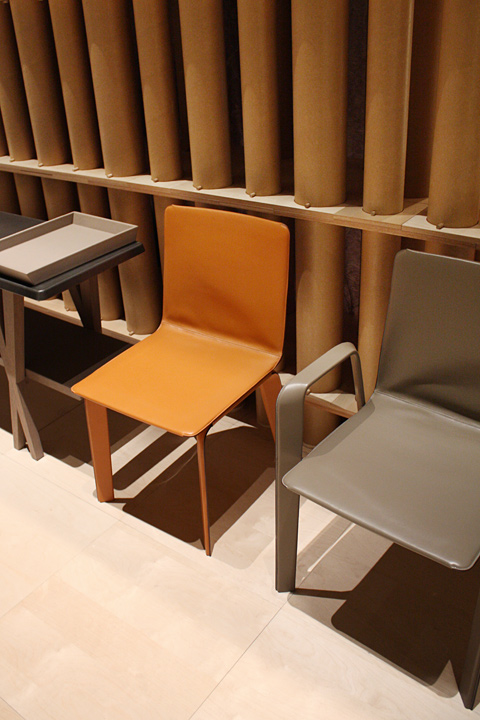 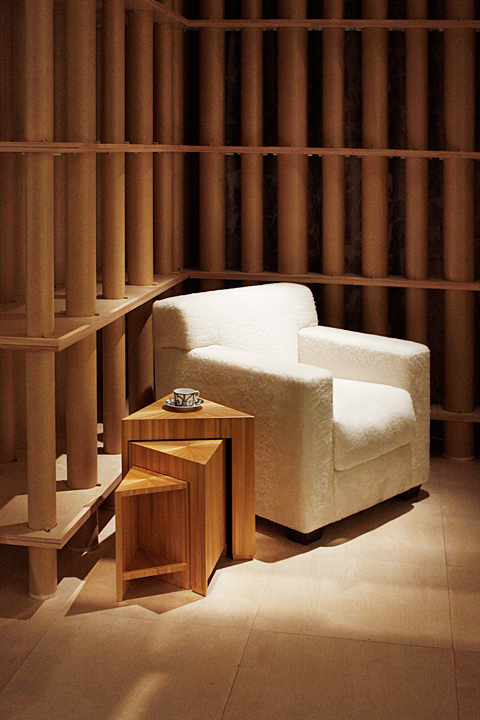 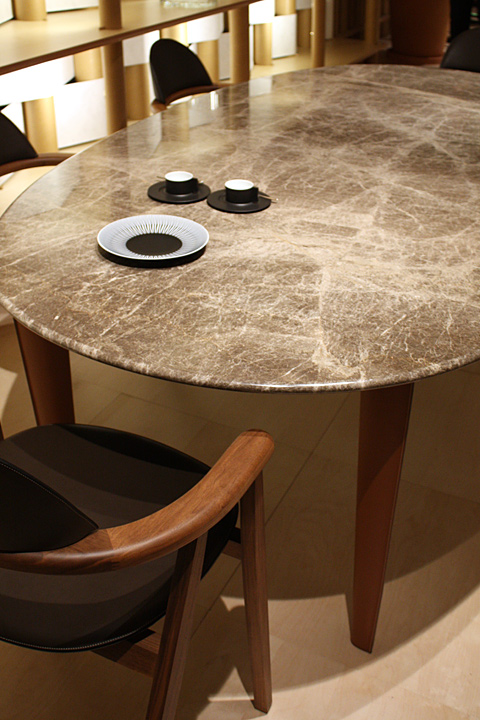 Chair and table by Enzo Mari 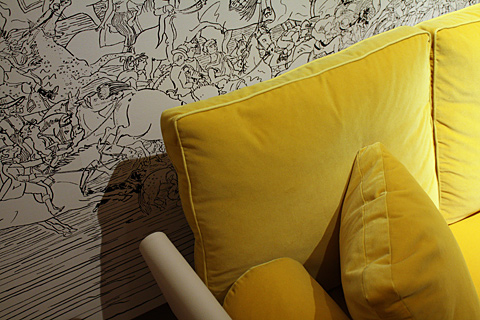 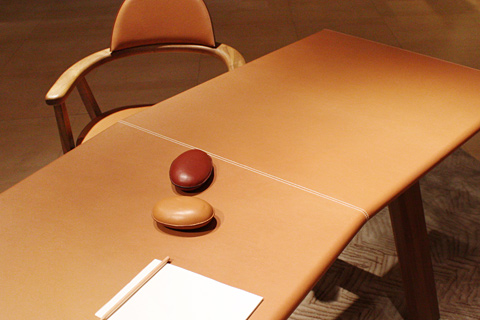 Chair and desk by Enzo Mari 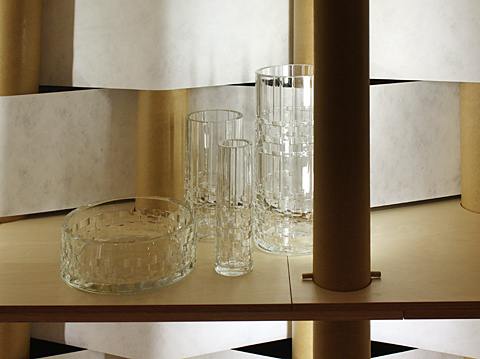