Like cuffs, colorful fabrics are pulled over the wooden planks and panels. They conceal the underlying wooden supports and line up to create a lively interplay of color. The individual wooden elements are connected to one another using zippers sewn onto each stretch of fabric; in this way they can be assembled and connected in an infinite array of constellations. And so a readymade emerges from the wealth of colors – a screen that traverses the room with its malleable curves and lines, throwing up boundaries and separating the room, creating individual sections.

Stephen Burk’s installation “Play”, on display in the “Hallingdal 65” exhibition held in Jil Sander’s showroom throughout this year’s Salone, is as simple as it is ingenious. Wool and viscose, the two components of the fabric spun by Kvadrat, provided the basis for this readymade. “Hallingdal” was created by Nanna Ditzel in 1965 and just fifty years later already considered a classic in the upholstery industry. Hallingdal is everywhere, at home, in the office, even in hospitals. Its color range made up of 52 original shades and ten new additions is reminiscent of a rainbow – and thus of the colorful era of Pop art during which Kvadrat was founded. Erling Rasmussen and Poul Byriel, who has previously been assistants to Verner Panton, launched the Danish textile company in 1968. The Kvadrat story began with Hallingdal in the Danish town of Ebeltoft, which in English means “apple orchard”. Today Kvadrat is an internationally active family business that is still headed from the Danish Jutland.

The Milan exhibition was conceived as homage to the company’s first ever collection, which Nanna Ditzel had originally designed for the Halling-Koch Design Center and Kvadrat has been producing as “Hallingdal” since 1968 without interruption. Patrizia Moroso and Giulio Ridolfo, head curators of this inspirational showcase, brought in a total of seven curators from different countries, who then invited 32 young designers to take part and experiment with the classic “Hallingdal”. Toying with new ideas the participants then created a series of cheerful pieces, like Pauline Deltour’s “Newspaper carousel” and Jean-Baptiste Fastrez’s hammocks. But there were also conceptual works to be seen such as Jonathan Olivarez’s “Chaise”, a roll of fabric, which was then spread over a bed frame. The Spanish designers from Mermelada Estudio used the famous fabric to create a cozy cocoon, which sat in the sober showroom like a scurrile bird house – and in addition to the joy in experimentation that obviously played a role here; the piece also revealed a clear practical use.

Designer and university lecturer Hansjerg Maier-Aichen was responsible for selecting designers to take part from Germany, Austria and Switzerland. He went for Bless, Mischler’Traxler, Adrien Rovero and Katrin Sonnleitner. Maicher-Aichen made a conscious decision to select fewer participants whose works demonstrated exceptional experimental quality and in this way set a contrast to the perfection and over-production that is omnipresent in Milan during the Salone. Markus Frenzl spoke to Hansjerg Maier-Aichen in Milan. sh

Markus Frenzl: Which criteria did you follow when selecting the participants from Germany, Austria and Switzerland?

Hansjerg Maier-Aichen: “Hallingdal 65” is a fabric that is of great importance for Kvadrat. And so, at a meeting in London, we consciously decided to focus on quality and considerably reduce the original number of participants, because for us presenting works by a hundred different designers just didn’t make any sense. All of the designers I chose take a very experimental approach to their work. After all, with the boundless perfectionism that characterizes our world today it is great to make something new, something imperfect. This also led to fascinating differences of opinion among the various participants when it came to the question of creative freedom in design.

What meaning could such an exhibition experiment have for manufacturers and designers?

Maier-Aichen: The exhibition is more than a mere corporate identity stunt, where hardly anything is actually produced. The “Hallingdal” exhibition will now spend a year traveling around the company’s various showrooms. Whereby such questions are always present: Does the exhibition also facilitate contact to other companies? What are the possibilities for these designs in terms of production? And where could an experimental design be realized in a small-scale series? – There must be around 10-15 designs in the exhibition that would actually have a chance on the market, especially with smaller manufacturers. After all, companies such as Nils Holger Moormann and e15 are increasingly profiting from many experimental approaches: Smaller manufacturers are now producing better quality!

Which of the works were you particularly impressed by?

Maier-Aichen: I find those works particularly impressive that don’t go too far in their simplicity and those that reflect the “work in progress”. For example, when creating the luminaires designed by Adrian Rovero the most important decision was to make them on a larger scale. This produced an entirely different effect, more structure; the design became a genuine lighting concept that could be realized on a large scale, in a museum for example. What I like about the “Framed” furniture by Mischer’Traxler are the experimental elements as well as the relation between the idea and the work they put into it. The concept that they would not do anything else to the fabric may appear somewhat benign but it in fact liberates the fabric from the orthodox upholstery concepts that usually determine its use – they are no loner the perfect, bourgeois items of furniture we are used to! When it comes to the works by the designers from Bless, I like the fact that they actually come from the textile industry themselves and are now taking a bold and unorthodox step into the sculptural. Their “No35 Automatica Carcanapé” is extremely conceptual and in fact the most radical design in the entire exhibition. It points to an alternative approach to furniture design and possesses a true sculptural quality. Kvadrat wanted to drop the project at first, but I stood my ground, arguing that those projects for which the curator has to put his own reputation on the line often do better than the more familiar ones. It’s a shame that it was the most harmless design in the exhibition that was featured on the invitations – the animals by Ionna Vautrin, which look like something from the 1980s. In the end, what is really interesting about a project like this is: What is it that is sticking with companies? And which changes will the project evoke on the side of the manufacturer? 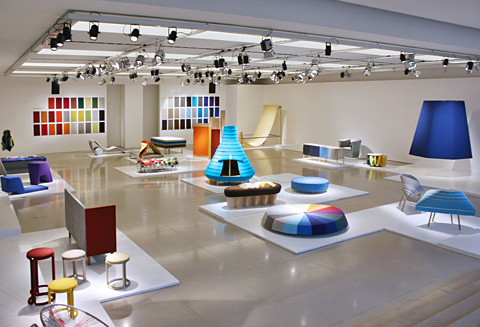 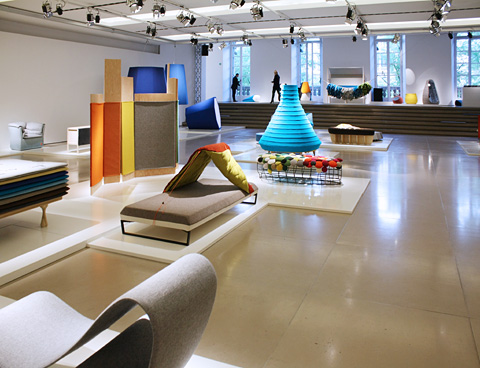 Patrizia Moroso and Giulio Ridolfo were in charge as curators in chief, photo © Dimitrios Tsatsas, Stylepark 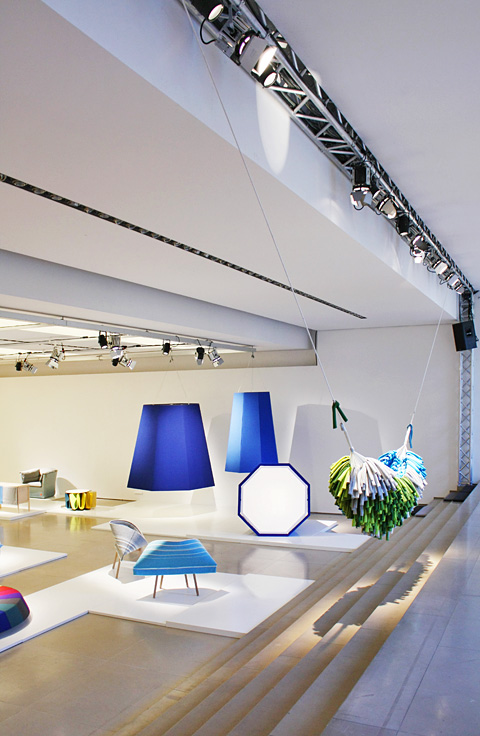 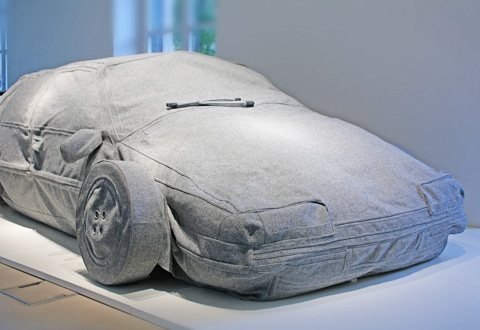 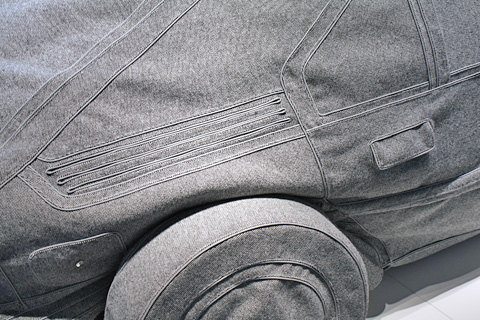 The cover refers to the contours of the car, photo © Dimitrios Tsatsas, Stylepark 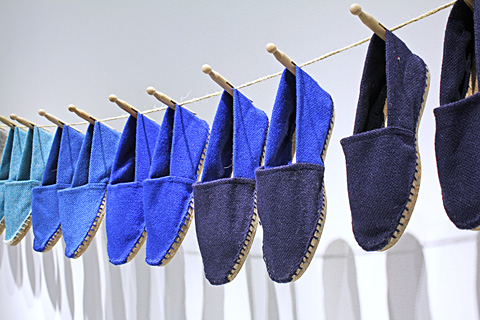 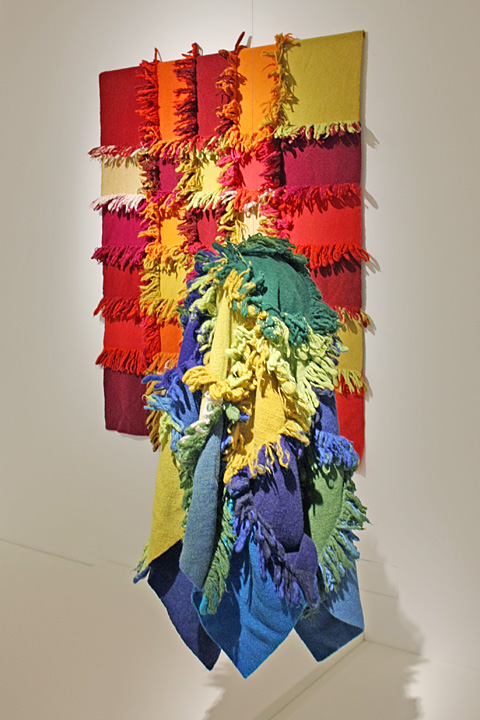 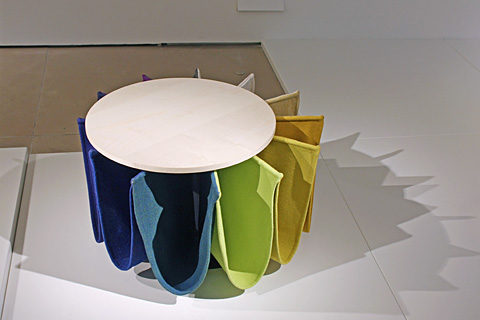 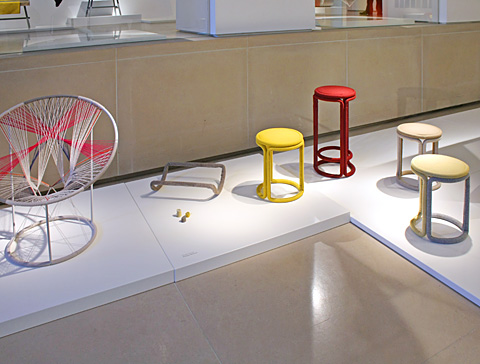 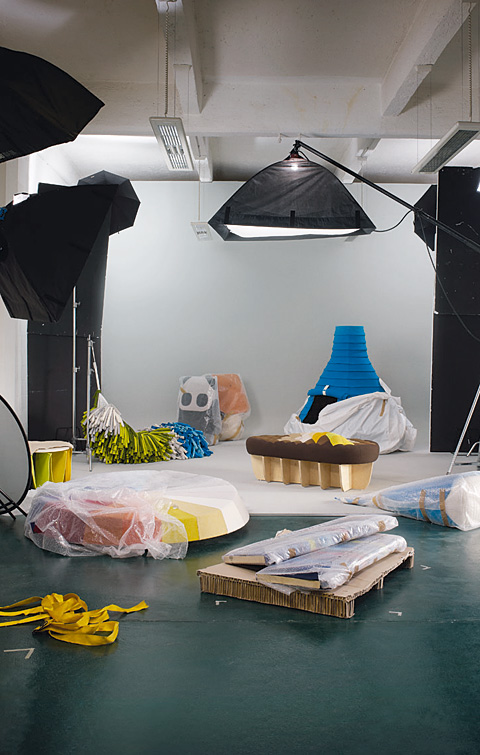 Shooting for the “Hallingdal 65“ exhibition by Kvadrat, photo © Kvadrat 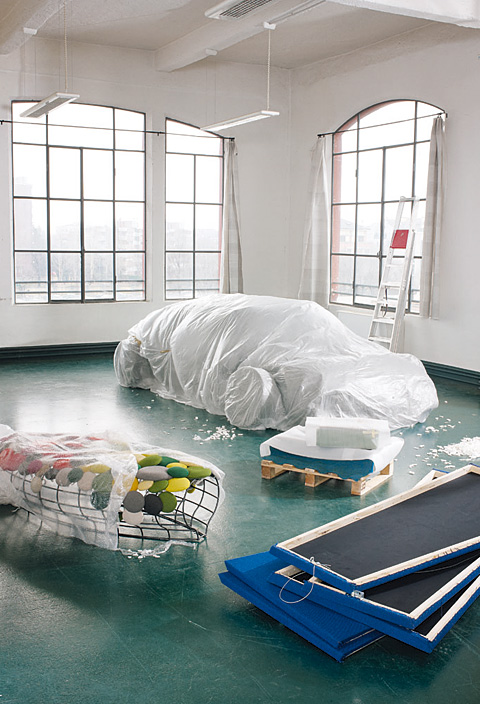 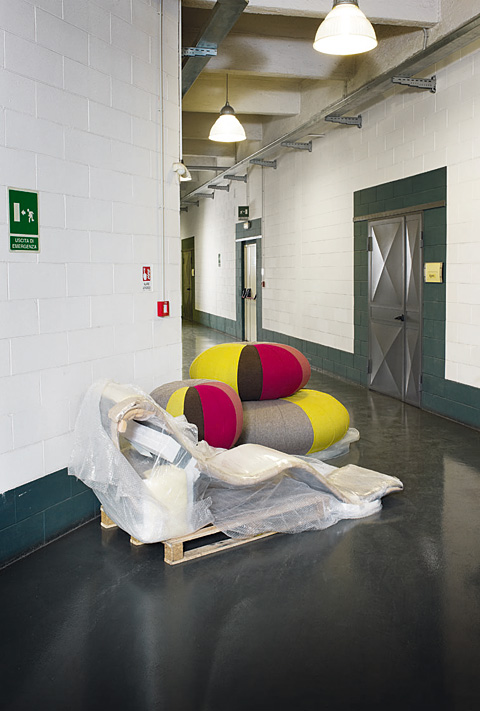 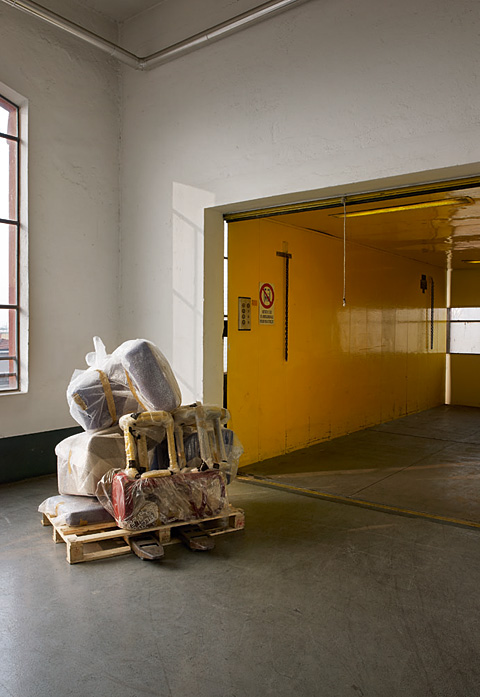 The bright colors of Hallingdal are covered under sheets, photo © Kvadrat 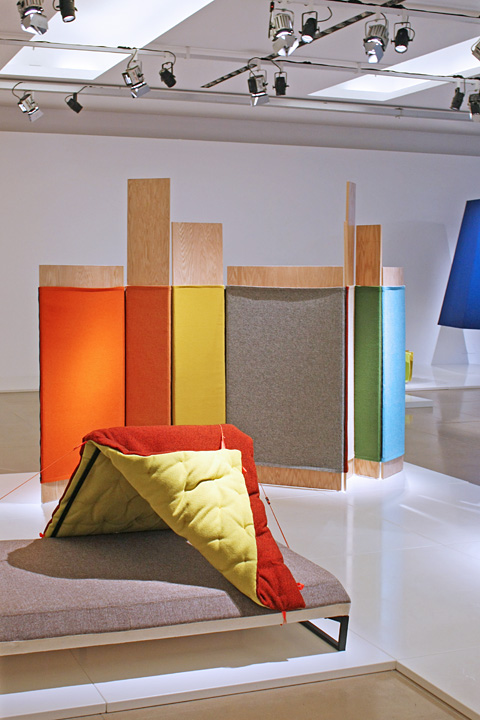 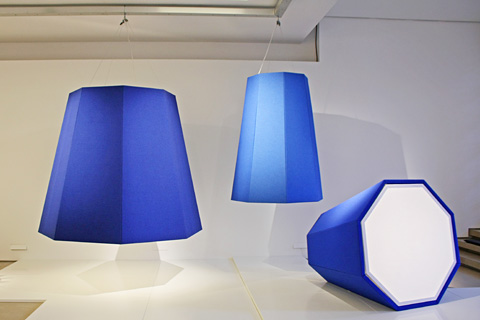 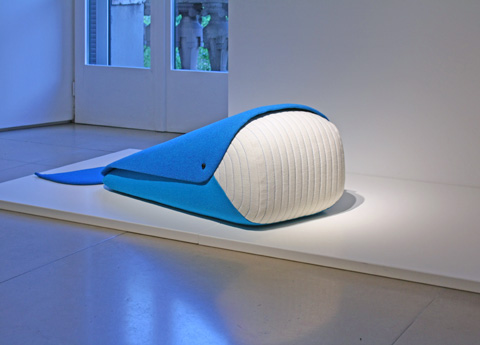 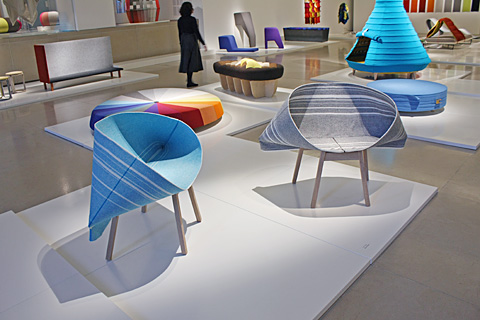 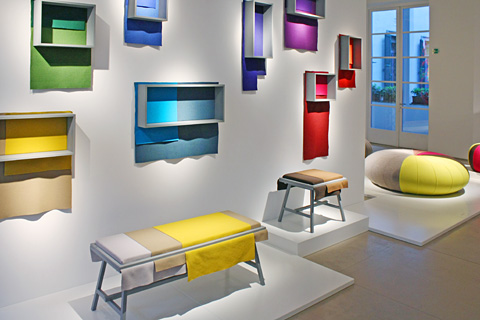 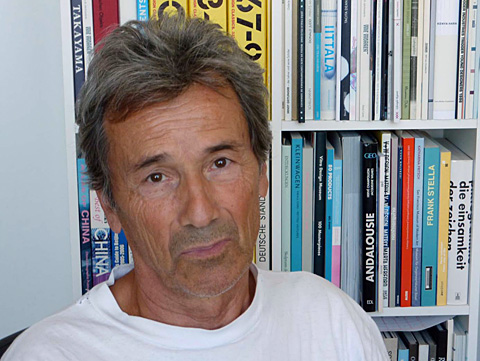