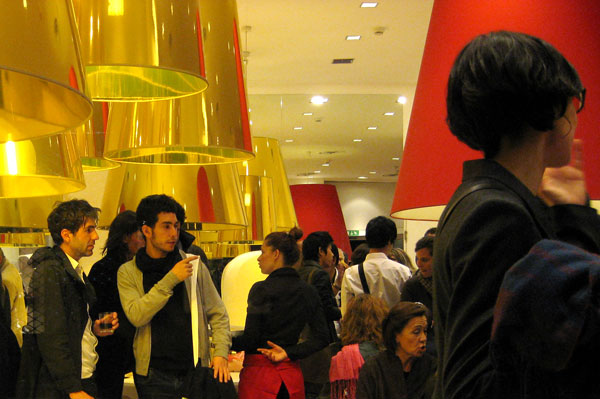 The design year traditionally kicks off with imm cologne. Sadly in recent years it has lost much of its prestige and standing. We can only hope that the imm manages to emerge from its crisis, but considerable action is needed if the downhill trend is to be stopped. Nonetheless, anyone with a professional interest in design should go to Cologne, but a day is certainly sufficient. One recommendation we can make: Munich-based gallery owner Jörg Schellmann is showing his furniture creations for the first time at imm (Meet and Greet on Tuesday, 19 January from 3- 5 p.m., Hall 11.2, booth K-031)

In recent years many exhibitors and visitors have focused their efforts on this successful fair in Paris. There is no denying that the attractive venue plays a key role but the fair itself has also been instrumental in attracting numerous actors in the design area including important textiles editors, who are provided with their own tent. Anyone who spends Thursday in Cologne can continue their journey to Paris the next day, spend Friday at the fair and enjoy a weekend in the metropolis on the Seine. The tip from the Stylepark editorial team: the design store Sentou located close to the Hotel de Ville in the Marais quarter in rue François Miron, 29.

In recent years Stockholm Furniture Fair has advanced to become by far the most important event of its kind in Scandinavia. For anyone wishing to gain an overview of the design scene in these northern nations in Stockholm is the place to go. The young designer show which takes place in the immediate vicinity of the other exhibitors is always an exciting event. Guest of honor this year is British designer Sir Paul Smith, who will design a lounge at the fair. Numerous events, showrooms and galleries in the city make for a worthwhile overall package.

Light+Building is undoubtedly the number one when it comes to lighting, electrical engineering, home and building automation. The fair which alternates yearly with the Euroluce in Milan showcases the most important innovations in technical and decorative lighting, but also as regards switches and building control systems. The fair is accompanied by the lighting festival "Luminale" with events spread throughout the entire city. The major design firms from Germany, Italy, Spain, Benelux, Switzerland and Austria but also numerous others from all over the world exhibit at the L+B, which makes the fair an absolute must for all architects and planners.

You can easily run out of superlatives when it comes to this mega event. The design year seems to focus entirely on the Salone. This is not always advantageous. Doing the rounds of all the events, exhibitions etc. in the city is a Herculean task, and you need to allow at least one day for the fair itself.
Our tip for Light+Building and Salone del Mobile, which coincide with one another: spend Monday 11 April: Light+Building and Luminale in Frankfurt, travel Tuesday or Wednesday to Milan to experience numerous openings amongst other places in Zona Tortona, spend the whole of the next day at the fair. This is an effective and sensible way of covering the topics of light and furniture in three days.