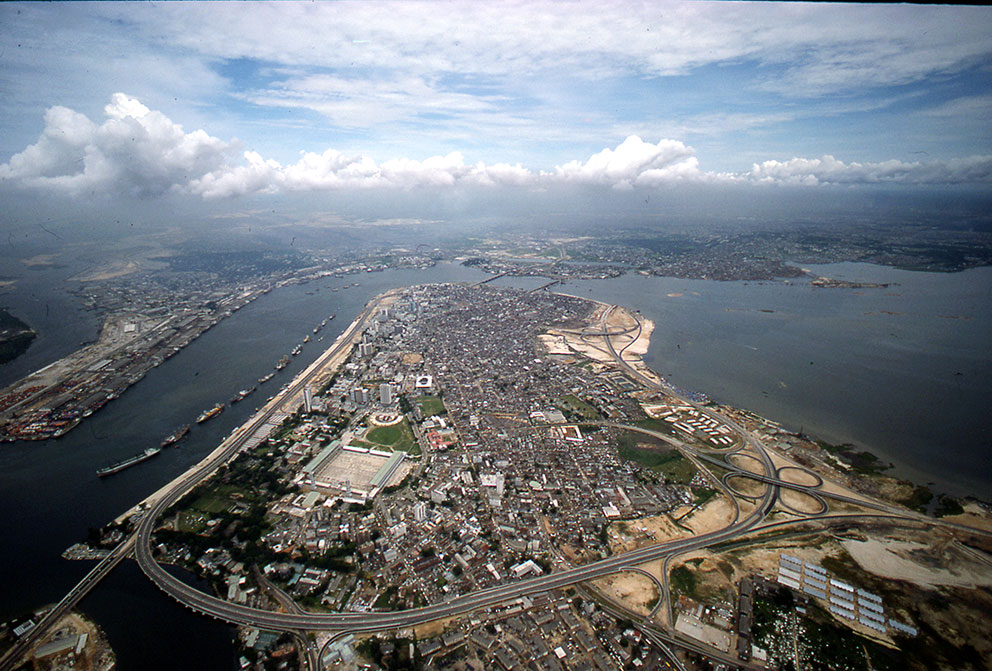 Lagos is stucked in traffic - but the new highways are not the solution. Photo © Wikipedia

The numbers speak a clear story. About one seventh of the world’s population lives in Africa, and the proportion is racing ahead. And countries in Africa are likewise urbanizing far faster than elsewhere, with the continental average being about 3.5 percent a year. Indeed, the forecast is that in just over a decade, cities in Africa will be home to as much as 50 percent of the population (approx. 700 million persons, similar to that in China at present), thus catching up with the global average in 2008.

African urban growth has not been on many radar screens, but rapid it has been: Back in 1960, metropolitan Mexico City had somewhat in excess of 6 million inhabitants, as against 21 million today. Its size is legion and all the difficulties its sprawl and administration encounter are the subject of much study. In October 1960, when Nigeria went independent, Lagos had only a tenth of the Mexican capital’s population, but today many estimates suggest its population is about 20 million. While Cairo has not grown as fast, it has long since gobbled up the Pyramids in its incessant outward spread, and the metropolitan figure of 10 million does not factor in the splash of satellite cities such as “6th of October City” that orbit it – the inelegant name remembers the beginning of the Yom Kippur War.

Then there are the 5-million-plus cities of Abidjan, Abuja, Dar es Salaam, Johannesburg, Kano, Khartoum, Kinshasa, Mogadishu, all of them huge in expanse. In fact cities in Africa make the US idea ‘urban sprawl’ almost pitiful: Ibadan in Nigeria, with a population of some 3.5 million, covers over 400 square kilometers. In fact, population growth in most African cities has not driven buildings upwards, but cities outwards. 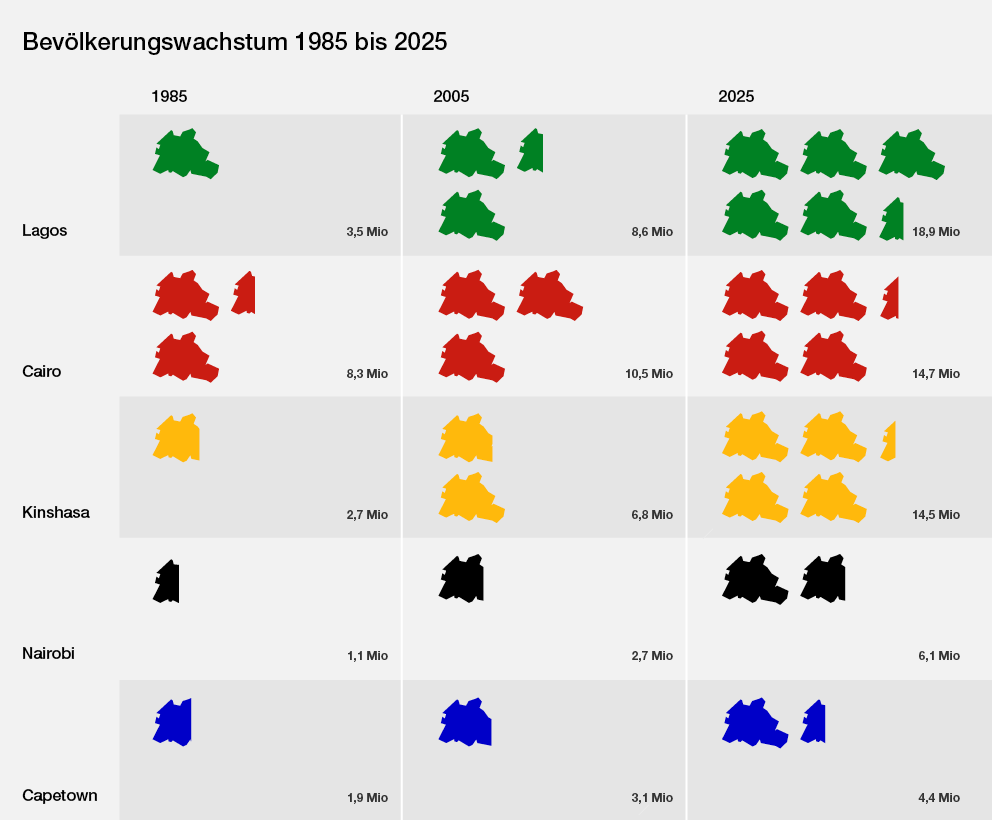 Nowhere is GDP growing faster than in Africa

It is not space that is short supply. But money to build a high-rise world or a high-tech infrastructure. Perhaps this is why all these cities have so often gone unnoticed when it comes to debates in the West on enhancing urban mobility. In Africa, urbanization has not driven GDP growth, which is attributable to other factors, but the continent nevertheless posts the world’s fastest GDP growth rates. Investors, keen-eyed birds of prey who are invariably the first notice a potential booty, are starting to look at the very real opportunities there. “Lions on the Move” ran the name of a McKinsey publication on Africa’s emergence as a fast-growth continent. Sure, the elephant called GDP was on the move.

However, the population most certainly wasn’t and isn’t on the move - other than into the cities. Where they got stuck. In 2010, 33 percent of the urban population in developing regions lived in slums, with the single largest slice being in Sub-Saharan Africa with a slum population of 199.5 million (61.7 percent) people, followed by Southern Asia with 190.7 million (35 percent). So the “top slumdogs” are not Indians. But in Africa GDP growth has not been buttressed by the infrastructure growth that has characterized China or India. In the latter, the “Golden Quadrilateral” highway network connects most of the key industrial centers of the country. India has been busy building close to 6,000 kilometers of 4 or 6-lane express highways to expedite internal transportation of goods to take the strain of its ancient rail network. 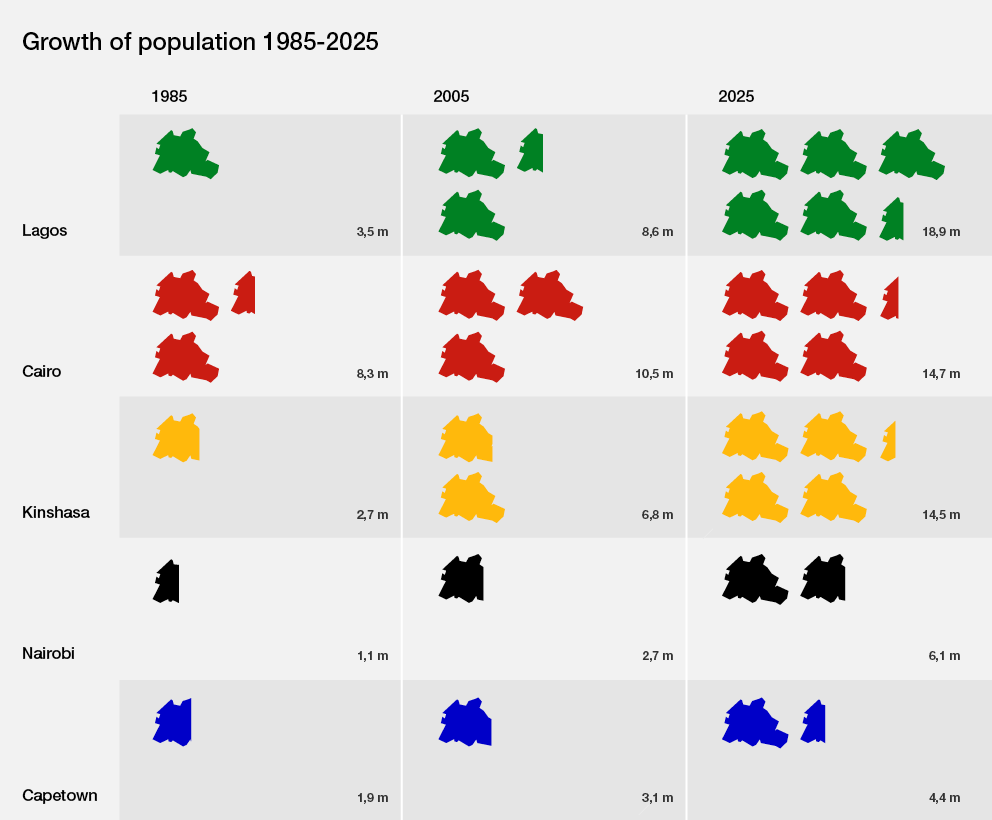 And Africa? Railroads? There is no track going north-south in east Africa, just as there is none going East West south of the Sahara. There is nothing that requires the processing of real-time satellite data to ensure high-speed trains do not get in each other’s way such as typifies Europe’s rail network. And there is certainly no 4-lane expressway doing either. In part, this a product of a continent carved up into antagonistic little slices by a colonial past, in part a reflection of poverty since or misallocation of funds.

Mobility issues in African cities make those elsewhere look piffling. The sheer influx inward is certainly not the largest of the challenges – and I don’t mean the problem of getting from one big city to the next (air travel has been rocketing…) No, I mean inside the city limits, where, on arrival you will invariably be stuck in a gridlock. A gridlock that often leaves the cities in splendid isolation. A gridlock that is made worse by putting in flyovers and rign roads, as they simply encourage more traffic. Travel outward for the mass of the population to other conurbations simply isn’t possible. 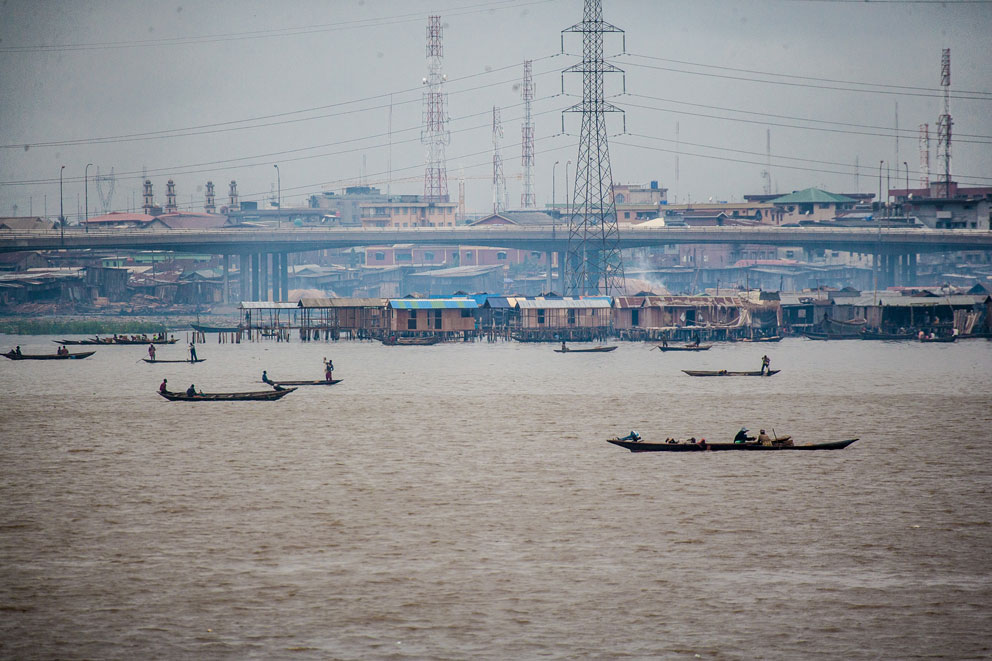 Some imaginative thinking is evidently also called for as regards urban mobility in Africa. One such idea is the deployment of cable cars in Lagos, hooking up the islands and sailing straight over the traffic. Photo © Leopardi

In Africa the car is a symbol of affluence

For them, the preferred (read: affordable) means of transport is buying a ride on the back of a motorcycle (along with others) or, if even that is beyond their wallets, squeezing into a shared-taxi-van (in Lagos they’re called danfos) – This is car-sharing efficiency par excellence! Never have you seen so many people in a minibus or so many minibuses as in Lagos, a form of immense energy efficiency that is also a sign of incredible national inefficiency: Think of the loss of national product spelled by most of your workforce spending 2-hours-plus traveling to work in the morning, and the same time spent traveling back after work. Not to mention the parents that never see each other in daylight except at weekends given this one huge flow of unidirectional traffic. Or the food and vegetables that perish trapped going nowhere on the same route. 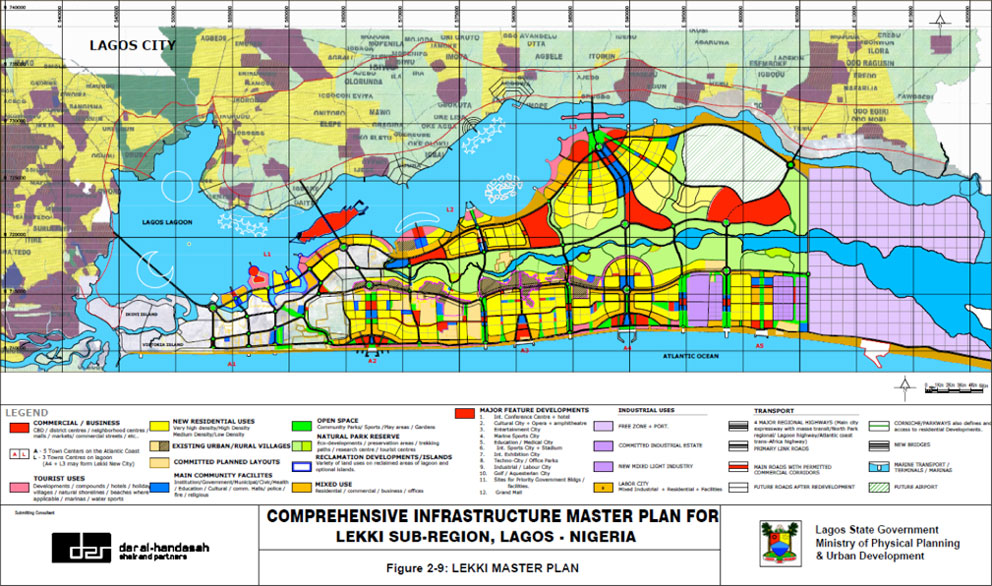 The situation does not look like getting better, because the nascent middle classes in these cities want to show their status by not having to ride the danfo to work, but to drive their own car. For if you watch Western or Eastern TV what greater symbol of prosperity will you see than the auto? Well, the most obvious route would be to ‘plan’ things better – retrospectively. That’s all very well as a computer simulation, but the reality on the ground is very different. Imposing order on chaos has never been an easy undertaking. And things get absurd when the cities were planned either by erstwhile colonial “masters-of-the-universe” as admin control centers – meaning they are invariably located on the coast and the hinterland (i.e., the rest of the country) simply supplies – more population. Or, possibly worse still, they were designed by the 1970s super-theorists. Such as Kenzo Tange emulating Le Corbusier with super-blocks in Abuja. And decked out with 1980s-International-Style Las Vegas glass-and-steel high-rises so marvelously suited to the electricity-strapped Tropics and Subtropics, really great in the heat. Or the six-lane super-CBD-highways – when the main mode of transport is a tuk-tuk? Le Corbusier (remember his wish for democracy through wide roads) was evidently in Chandigarh by car, and confused the name with Shangri-La.

Or even worse, the cities were planned by non-planners who simply wished to ape a ruler’s private wishes (Yamassoukrou). Or worst of all, were not planned at all (e.g., Kinshasa, Mogadishu). In fact, planning after the event is not only a toughie, it can cause civil unrest, as in Abuja in the mid-Noughties and as in Addis in May of this year – as in people who are inhabitants often resist official attempts to ‘upgrade’ the slums, while administrations use their monopoly on power to try and resist further ‘slumification’.

So what to do? Go underground? Cairo at least has a proper metro LRT (3 lines), as does Algiers. Johannesburg, Pretoria, Durban and Cape Town have suburban LRTs. Lagos and Addis Abeba (3.5 million) are just both opening their first lines. But such projects cost mega-bucks. And since urbanization has not been driving GDP growth in Africa, the cities don’t necessarily have the cash for such systems. Moreover, if we assume a typical planning cycle is a decade from ‘problem identified’ through to ‘idea ready for implementation’, then with 11 years to go until 2025, the planners better start thinking hard.

Kenzo Tange designed the plan for the capital Abuja (left) – a reference to the plan for Chandigarh (right) by Le Corbusier. Illustrations © Wikipedia

Without a master plan

Nairobi on a recent count had 3.2 million inhabitants. And ask Herzog & De Meuron in their capacity as professorial mentors of the ETH Studio Basel project on it and they’ll tell you it is, however, “A City without a Masterplan”. Hard to imagine, but true.
Not that masterplans are always useful as they can cause you to rely on what you are used to from a different continent. Africa has in several instances avoided replicating ‘old world solutions’. It simply leapfrogged landline phones and went 3G while Germany was still trying to work out a licensing system. And now they’re going straight for renewables instead of bothering conventional power stations. And as regards mobility they need to do a lot of leapfrogging. If transport-sector energy efficiency is measured in terms of the spread of efficient vehicles, a shift to mass rail transportation, and better transport logistics. 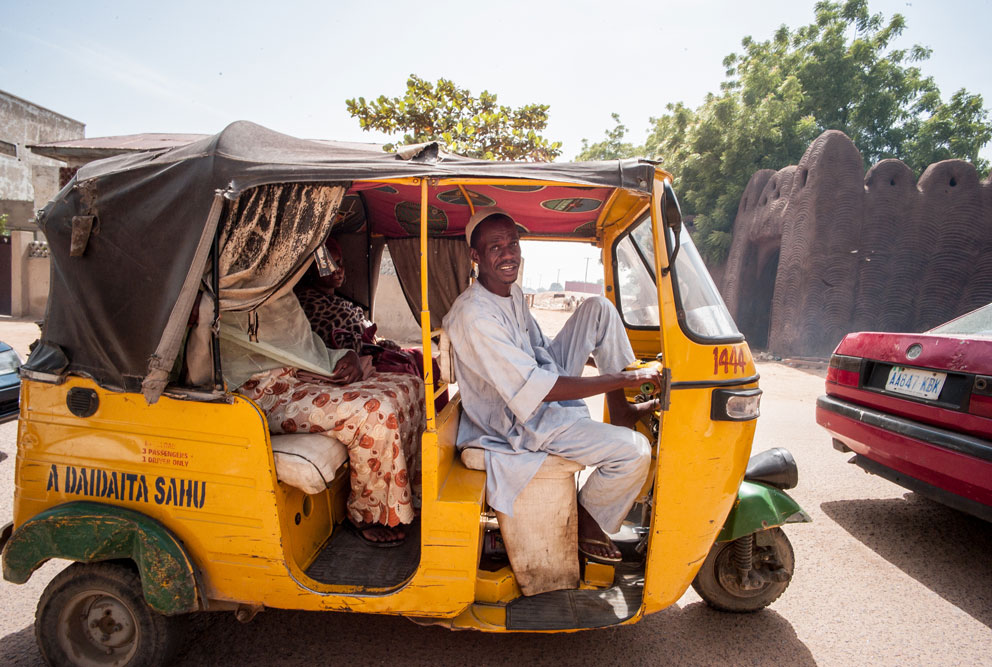 Some imaginative thinking is evidently also called for as regards urban mobility in Africa. One such idea is the deployment of cable cars in Lagos, hooking up the islands and sailing straight over the traffic: If you can’t go through a traffic jam, or under it, go over it. And cable cars cost only about a 35th of a subway. Or of solar-charged electric cars that form lines like caterpillars: in the sub-Saharan cities, the distances covered to work are not great, just congested. And when people are at work, the cars recharge. But that leaves the problem of parking space. Could GPS perhaps help? Where we use satellite data to keep our trains moving without collisions, could sensor data be used to control all the traffic lights? Could these cities start relying on short-haul air cargo, roll-on, roll-off, especially those in landlocked countries?

Or take the danfos in Lagos: The process whereby vans that are no longer considered roadworthy in Europe gain a new long lease of life in Africa is actually positive recycling. Meaning the original social investment in the lifecycle of the vehicle first pays off once it goes into use for another 20 years on a road in Abidjan or Accra or Dar-es-Salaam (where they’re called “daladalas”). So should Western theorists not also be considering a new “Clean Development Mechanism” that takes a percentage of the van’s price ‘here’ and transfers it ‘there’ to improve the roadworthiness of these crucial vehicles – rather than running sexy projects to reduce their greenhouse gas emissions (as in the German ‘Transfer’ scheme)… Whatever the solutions dreamed up, many imaginative visions are called for and it’s certainly time to start thinking outside the ‘Euro-Box’.

About the Author: Dr. Jeremy Gaines is a writer and consultant based in Frankfurt, Germany. He is specialized in the fields of sustainable urban development and renewable energy in Africa. He is currently active on various projects on issues relating to vocational education, infrastructure development, and climate change, with a special focus on West Africa. He is co-lead on a project to develop a solar power program for Nigeria. 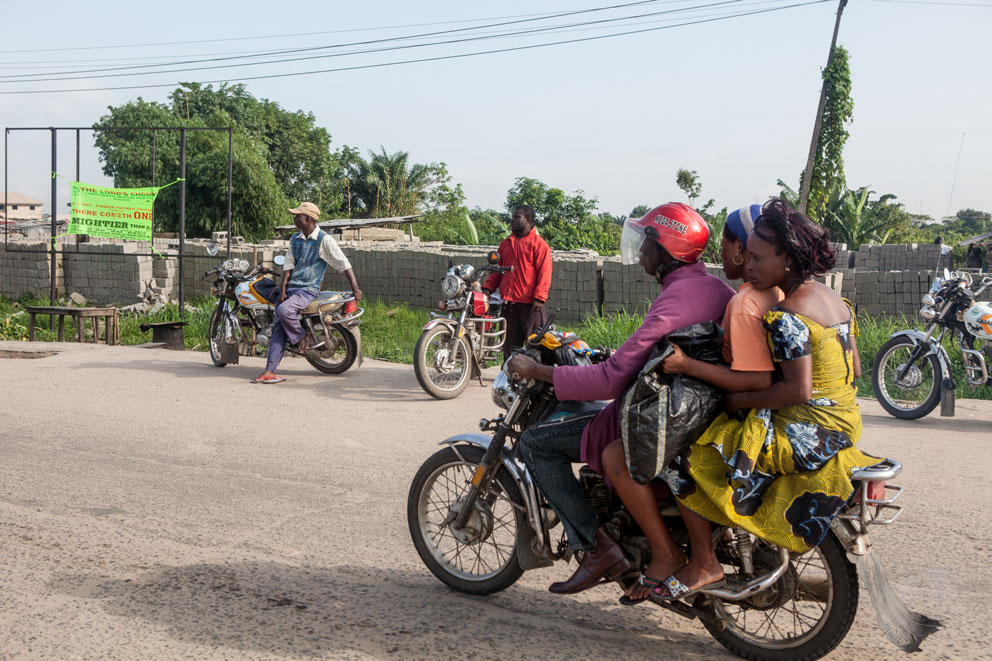 The preferred (read: affordable) means of transport is buying a ride on the back of a motorcycle (along with others). Foto © Leopardi
Advertisement