Stéphane Arriubergé and Massimiliano Iorio booked a tiny corner in Hall 6. Wedged in between the tall walls of the neighboring trade fair stands – without exception major Italian corporations – the "Moustache" collection seems a touch forlorn. The two founders and owners of the French fashion label are nonetheless delighted to have made the leap from the Zona Tortona to the trade fair grounds: "We have been trying for three years to get a stand in the grounds and in the right hall. This year we finally succeeded," says Stéphane Arriubergé . "Zona Tortona was perfectly fine for the launch two years ago. But then we found that at Maison & Object in Paris we landed more orders than at Zona Tortona. That's why the move to the trade fair grounds was important for us in Milan as well."

Established in the crisis year 2009, the company's start-up phase was an adventure on which the two young Frenchmen embarked for a lack of alternatives. "We had it all planned, and then came the crisis," they recall. "We had no choice but to continue." Without the backing of a strong investor, in just two years Moustache has established a sales network that combines online selling with local furniture stores. The experience they gained with Domestic, the company specializing in small everyday objects such as plates and wallpaper, which the two founders have been running for several years now, was a great help. The seven-man team of both companies shares the storerooms and offices. Moreover, the contact to designers had already been established. That said, the fact that the economic crisis forced several manufacturers who produced furniture for Moustache to file for bankruptcy, made the initial years particularly tough.

In the meantime the Moustache collection has grown to include a small but select range of chairs and tables, luminaires and shelves by Inga Sempé, François Azambourg, Big-Game, and other French designers. Several items have already been erased from the catalogue – this too is part of business, says Stéphane Arriubergé . "You really need to take a critical look at yourself. And if no one buys our ideas, it simply won't work." Other products, in turn, have come to be bestsellers, for example, the Bold chair by designer duo Big-Game. Since its launch two years ago, some 4,000 chairs have been sold, and sales figures are even rising. "This is a great success for us," Stéphane Arriubergé is delighted to say. "I believe each year you need one item of furniture that has the charisma and audacity to make it in the market." "Vapeur", the unusual luminaire by Inga Sempé, which is suitable for both table and ceiling use, clearly reflects the Moustache strategy: Their unconventional ideas, catering to the needs of the label's young generation of consumers and designers, have spawned a truly distinctive furniture collection. Prices in the medium range mean that young consumers can also afford a lot of the furniture, and their requirements are at times interpreted in a way that is as amazing as it is simple and practical.

When is the new Moustache collection going to be launched?

The latest masterpiece is "Petite Gigue", a three-legged wooden chair conceived by François Azambourg: a delicate, meticulously crafted piece of furniture, which, despite its compact appearance is extremely comfortable to sit on. Unlike many of its competitors, Moustache decided against presenting a new collection at this year's Salone. Azambourg's three-legged chair and a simple plate that is Inga Sempé's "Balcon" wall bracket – practical as it is neutral – are the only innovations at Moustache. "We use the furniture fair to boost our sales," Auribergé explains. Moustache will not be presenting a new collection until July, during the Design Parade in the southern French town of Hyères. "We have been invited to a small exhibition in a chapel," says level-headed Arriubergé, who studied interior design. "We will use this backdrop for a stunning exhibition, without any commercial motivation." Sounds equally idealistic as it is realistic. Not until next year can the new collection be seen in Milan – where it can then be ordered from dealers.

Likewise launched two years ago, the Italian label "Skitsch" presents itself in a completely different way – with less idealism and a stronger focus on sales. Skitsch decided against experimental ventures and a strict selection and instead opted for the widest possible product range and "multi-channel stores" to win the market. "We simply wanted to go all out for it," says Massimiliano Moschini, managing director at Skitsch. We want our range to appeal to a widely diversified audience and cater to various market segments. Accordingly, Borek Shipek's "Kicker" table priced at EUR 3,500 features in the Skitch catalog alongside Marc Sadler's "Madeira" chair at just EUR 120. In English, the label's name roughly translates as "anti-kitsch" which stands for the naïve and romantic designs by the young Italian designer Alessandra Baldereschi just as much as it does of the industry's doyens and famous stars, including Marcel Wanders and Jean-Marie Massaud. The label's art director Cristina Morozzi, design journalist, curator and critic, pursues no clear line. With its own "multi-channel store" in Milan's Via Monte di Pietà, a second store in London and franchises in Beirut and – as of June– in São Paulo, Skitsch pursues an aggressive market strategy and employs a sales network comprising 25 agencies in 400 stores across Europe. "Ultimately, we are aiming for around 800 to 1,000 stores," says Massimo Moschini, content with what they have achieved to date.

The concept for the collection is deliberately left open and is intended to appeal to young and mature consumers alike. Rather than limiting itself to a single language, Skitsch seeks to cater to all tastes and budgets, leaving the designers the greatest possible freedom as a result. The diversified audience is part of the "branding" strategy, as are the different materials – from crystal plant to wood, and porcelain to plastic. Following the acquisition of the company, the glass objects by Dovetusai were integrated in the Skitsch universe, just as the furniture by Magis or other producers was sold in the stores to promote impulse buying. "We don't intend to have our own signature but intend to offer something for everyone," Moschini says, pointing out that nowadays eclecticism is such a widespread phenomenon that such a market strategy indeed makes sense.

The Skitsch collection now comprises 350 product families overall, including sofas and chairs, clocks and tables, bookshelves by Front Design and luminaires by the Campana brothers. It is kind of a general store that does not always present itself in the right light: Featuring among the 18 novelties that Skitsch is showcasing during this year's Salone are designs such as Alessandra Baldereschi's "Fil de Fer" outdoor family: chairs made of metal, which in their ornate manner allude to lounge chairs but eventually transpire to be not so much humorous reference than fatuous wire frames. That said, there are some surprises among the reissues: The "2D Led" ceiling light by "design Ding 3000", for example, has embarked on the path of radical reduction enabled by LED technology.

The question remains as to how Skitsch can be ultimately be classified: As a general store that happens to sell furniture? Or as a treasure trove for affordable design? In any case, the company regards itself as being in direct competition with the likes of Zanotta or Alias, with prices deliberately kept lower. 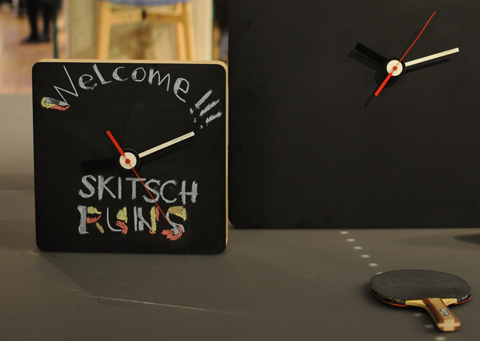 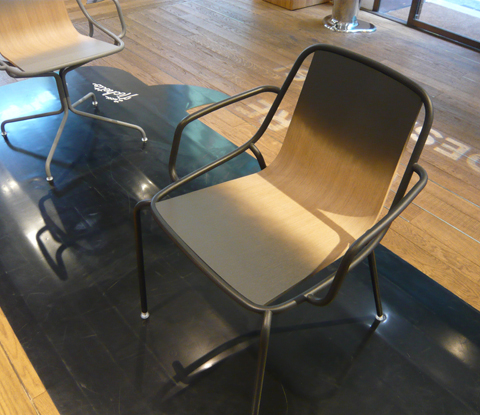 Chair „Alle“ by Luca Nichetto in the Showroom of Skitsch 2010 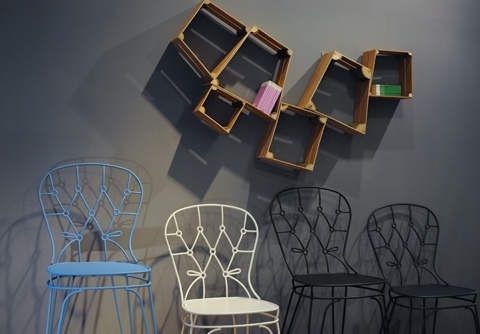 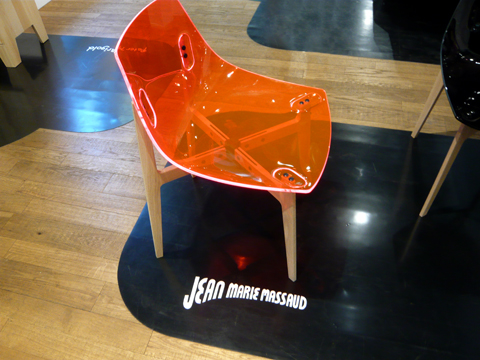 In the Showroom of Skitsch in 2010, Chair by Jean-Marie Massaud 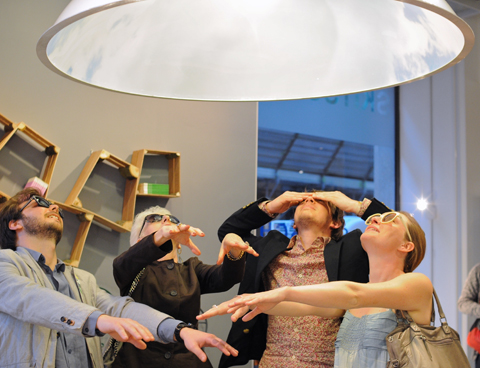 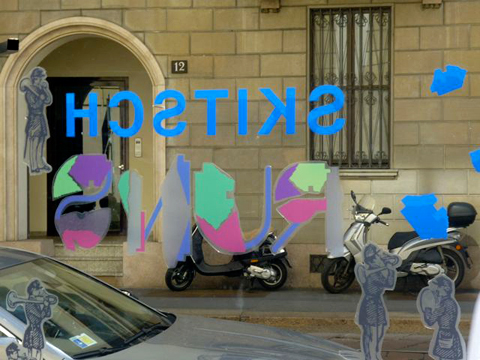 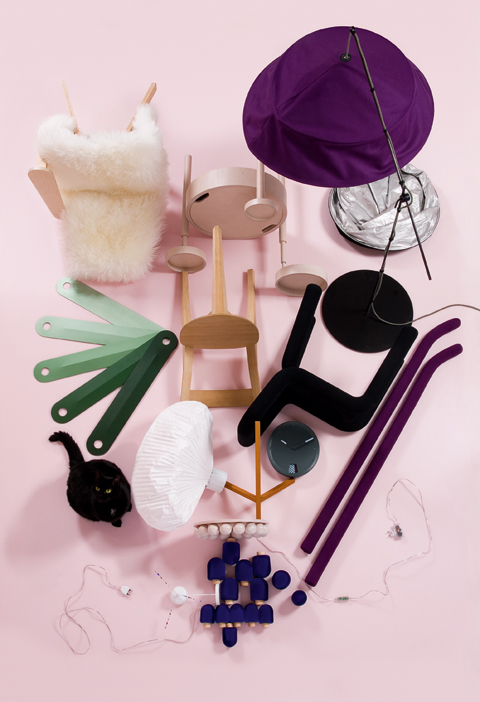 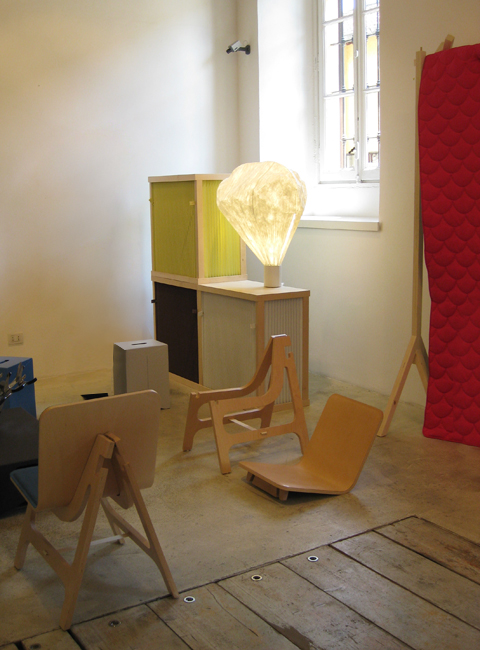 View in the showroom of Moustache in Milan 2009, Instant Easychair by Matali Crasset, Lamp Vapeur by Inga Sempé 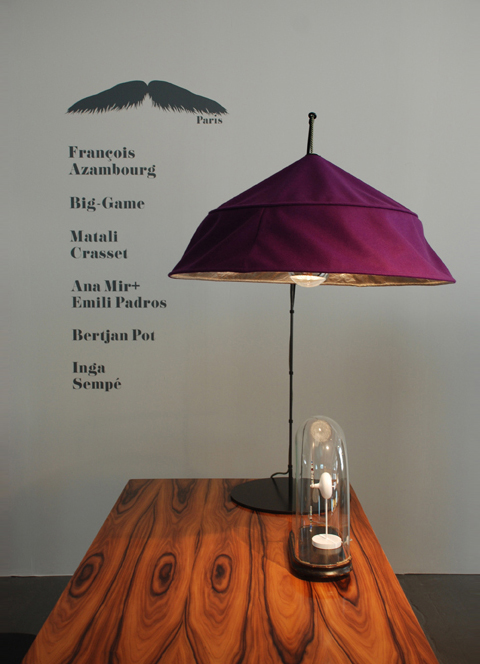 Showroom of Moustache during the furniture fair in Milan 2010 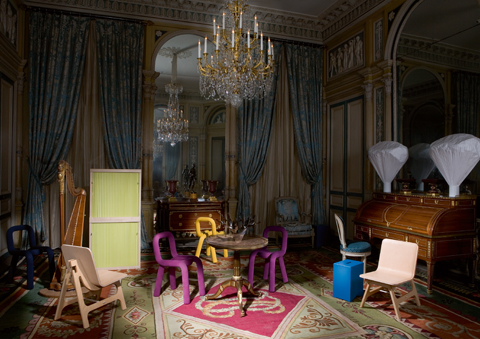 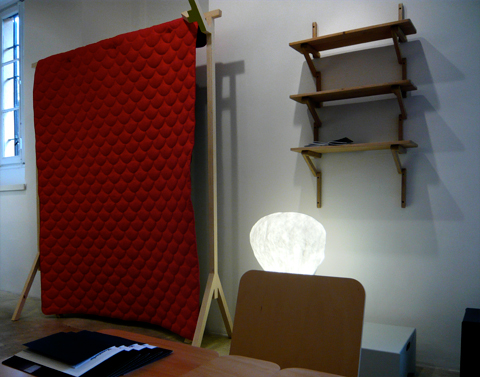 Showroom of Moustache during the Salone 2009 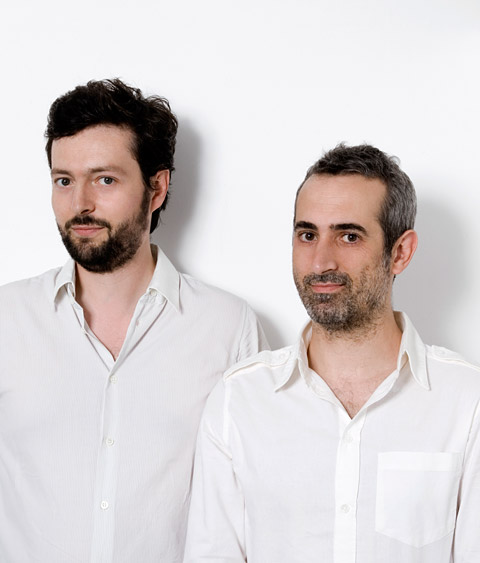 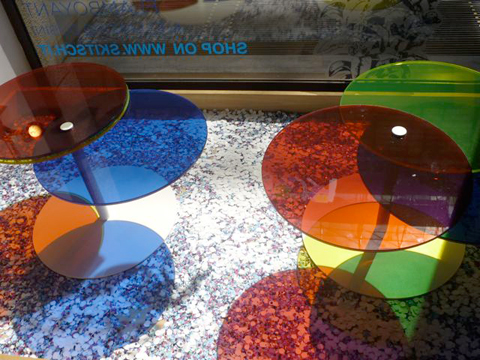 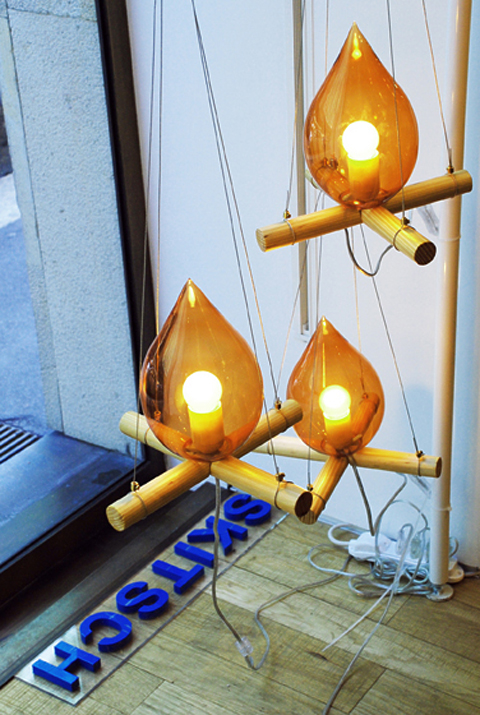