Always keep to the wall. That’s how one slowly approaches the phenomenon of Gerwald Rockenschaub and his intricate look-and-find installation “multidial” at Kunstmuseum Wolfsburg. Because the beholder, confined to viewing distance, must select and select again from among the 385 “subjects” that the Austrian artist has installed upon the 70-meter-long angled wall in a hall with a floor area of 1,600 square meters. Glowing from the primed, white picture wall without any apparent relationship to one another are stylized ladders and loudspeakers, a slice of melon or a nude female back with a red dot instead of Man Ray’s infamous treble clef, for example. Some might recognize allusions to art history, from prehistoric rock carvings, to the reliance upon gestural-expressive painting, right up to constructivist form(ula)s and calculated abstractions. While others may divine deeply emblematic references to ideological struggles between factions of crosses and squares, even religious motifs. But for Rockenschaub, whose co-invention of “neo-geo” in the 1980s was a frosty smile in response to the intense heat of the Neue Wilde, this is neither about idols to adore nor about ‘icons’ for the everyday, or even about simple “signets”, in other words, imprints, printer’s marks or company logos.

Right in the furthest nook, as the pivotal point of the entire construction, stand the letters “GR”, reflected within themselves, familiar to those who have traveled in France as the shorthand for the “chemins” and “sentiers de grandes randonnées”, which are routes – and secret pathways – for meandering walks. Something along these lines must have crossed the mind of the Monseigneur, Rockenschaub, this time. Indeed, for the artist of symbolism, who in vulpine modesty states “the offering of visual stimuli” or sheer “eye sex” as his métier alone, the effort involved was too great, as for months, the Multimediafex and DJ, a dab hand at sampling, experimented with the composition using a three-dimensional computer model of museum halls and artists’ walls, arranging symbols and bringing a long, hard bench into position. Even the practical seating furniture may be taken as a symbol, referencing the bench in Mies van der Rohe’s Barcelona Pavilion. Looking out through the glass of one of the panorama window onto the outside world there is akin to how Rockenschaub, as if employing a multidimensional touch screen, opens up a glimpse into a parallel universe.

Seen in this way, the Wolfsburg picture wall transforms itself into a colorful landscape, which has been hit by a semiological tsunami, a massive advertising battle, a ‘war of symbols’. That would be the consistent further development in the imaginings of the caustic, satirical novelist, Jonathan Swift, who in the 18th century directed his traveling Gulliver into an academy, where scientists picked up the objects currently entertaining them and displayed them to their adversary in order to state their cases “most concretely” – without making an ounce of sense. Yet such figments of the imagination aren’t Rockenschaub’s style. When all is said and done, what is important for him is the spatial experience. For this reason, the clerestory window in the great hall of the art museum has been left open for the first time ever, which allows more light to fall upon the White Cube. Previously, a dark “Platonic cave” was constructed in that same space to house the video works of Douglas Gordon. Months later, the visitors to James Turrell’s light instillation gazed up at a pale, gleaming wall, behind which an apparently endless space seemed to loom – as an expression of suffused emptiness, the museum’s director, Markus Brüderlin, points out.

Rockenschaub’s raucous parade of symbols now offers the alternative approach: a ‘suffused emptiness’, which Brüderlin assigns to the multiple-option society of the 1990s and to the “multidial” of completely differing, “flexible” lifestyles. Beyond these cultural connotations, however, all 70 meters of the picture wall function above all as a visual conundrum, after lengthy viewing of which the relationship between the image and its surroundings are upended and the boundaries dividing the projection space and real space push themselves inexorably forward. Although many symbols look rather like place holders for design objects, they are arranged to follow neither an apartment’s practical order nor the carefully considered sequencing found in museum depositories or on archive shelves. Instead, in Rockenschaub’s compositions, the tensions between color gradients and form correspondence tremblingly superimpose one another.

At the latest, the viewers will encounter this phenomenon as they step behind the scenes and enter three smaller closets. There, Rockenschaub has given the otherwise free-floating symbols a home; here you can examine three individual cases up-close: a green bench that stands diagonally across the room, simultaneously blocking the entire room and, paradoxically, bringing it to attention. A golden puck upon a lilac-colored expanse of wall absorbs the circular indentations on the exposed concrete of Tadao Ando’s minimalist architecture and, as a cadenced division, marks the almost liturgical order. And finally, three plain red points, which nevertheless pull everyone under their spell. For they are not painted, but cast onto the wall by a projector, begin to oscillate and create a visual force field. These are precisely the visual landscapes of the 21st century. 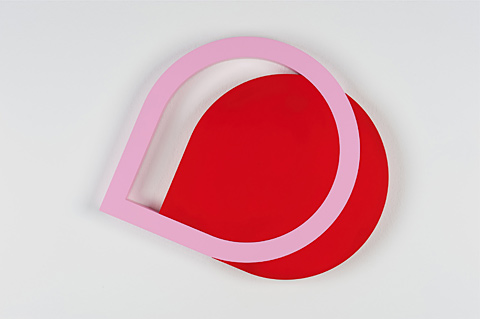 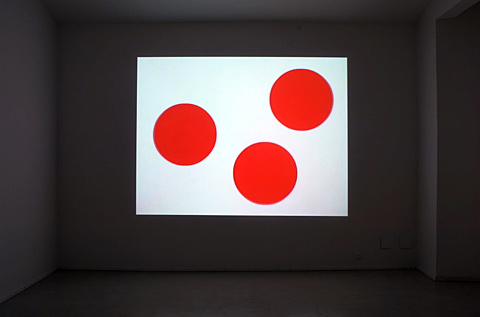 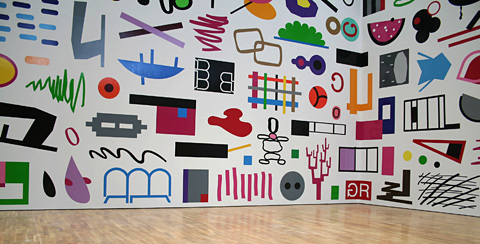 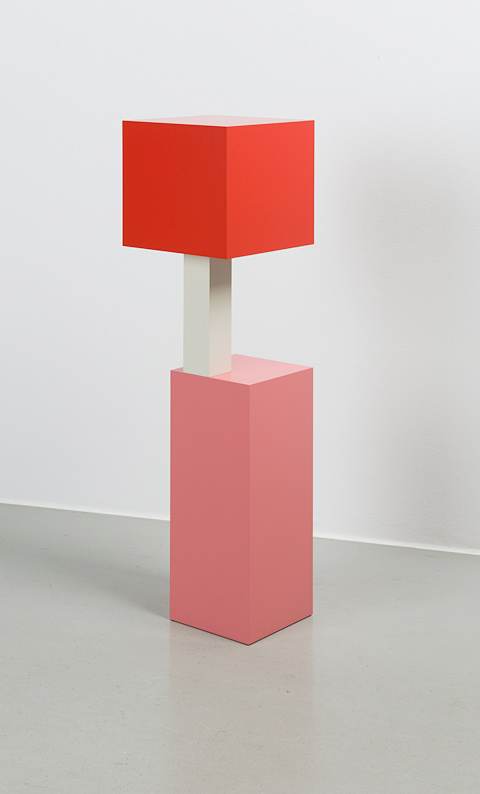 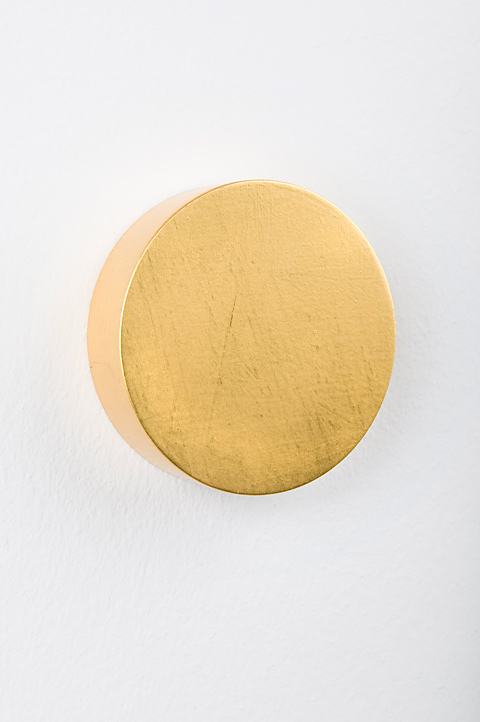 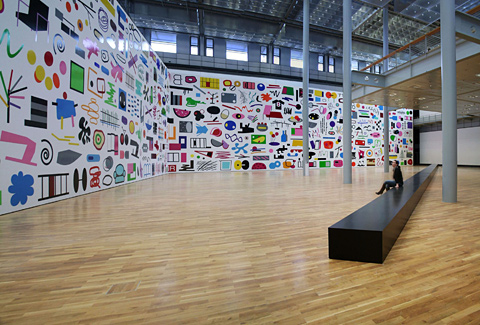 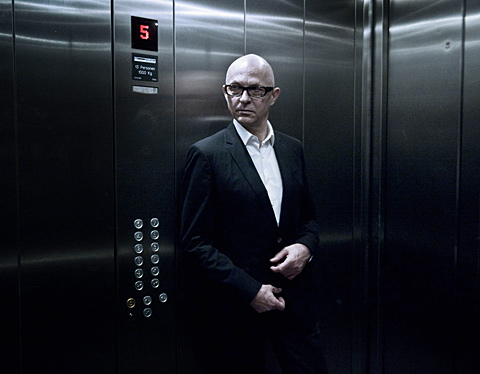