top
Waiting for the next goddess
by Tumminelli Paolo | Sep 15, 2009 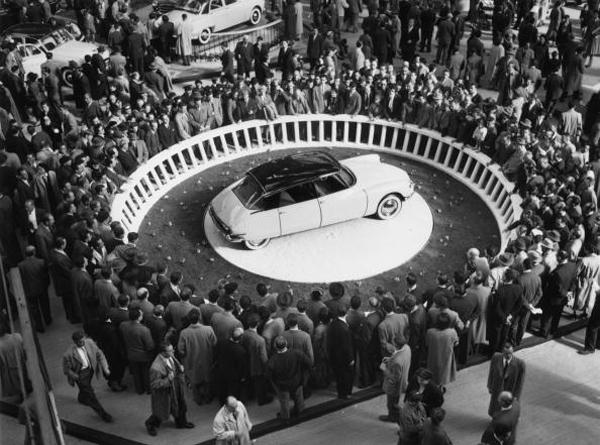 In the Germany of the automobile, Christmas comes but once every two years. Then however, as punctually as ever, the IAA car show opens its doors in Frankfurt/Main. For young and grown-up alike the announcement means a few sleepless nights until the big day comes. What exactly they are dreaming of is uncertain. In yesteryears it was the red sports car and the silver arrow, not so long ago the gas guzzler, then the people mover. And today? I am dreaming of an old picture. Paris, 1955, the premiere of the Citroen DS 19. The black and white picture of the Grand Palais reveals a circular artificial lawn surrounded by a white fence, in the middle of which there is a white circle, and on it, finally, the goddess. A hovering Madonna in a black and white dress, the tires likewise surrounded by a white strip. The association with the halo is obvious. The masses are congregated. In several rows right around the fence. Struck by the marvel that this automobile is. This is no car show. This is adoration.

Just like you do the lottery in the hope of becoming a millionaire, car freaks go to the car show in the hope of experiencing a similar apparition. Because the days of miracles appear to be over. The unannounced appearance of the DS was more than a surprise, it was a shock. And nowadays there is no greater fear than that of doped consumers getting out of control. Ingeniously placed press releases and far too naive guerilla-style communications prepare people gently for any new model there is. Visitors, who have already seen everything in advance, can devote their time to feeling steering wheels, trying out sitting in cars and collecting brochures, stickers, and give-aways. It will be interesting to see if there is anything at all in this crisis year. And yet, deep down, I cannot get the dream of the car of the future, the new DS, out of my mind. And if nonetheless, if anybody at all, if somewhere after all...? According to news reports this is not going to happen again, not even at Citroen.

And even if the Madonna is not going to be there I am going to make the pilgrimage to Frankfurt and go off in search - like a child at Easter looking for the eggs bunny has left - among other things for a follow-up model, which - regardless of whether it is better or worse looking - is smaller on the outside, bigger on the inside and lighter all over than its predecessor. Otherwise it is always the other way round, which in terms of construction is not exactly a great achievement, but which is called progress all the same. Progress? Sustainable design is only the result of respect for room, material, and energy. I also wish at long last for interiors which with regard to space, proportions, air and light reveal architectural qualities, spaces with furniture that invite you to live. With windows that do justice to their names. Genuine, big, light windows. Like the ones at home. And I wish for something pleasing, because we can really no longer like the aggressive, progressive, transgressive face of current automobiles, the insufferably cool face of man's best enemy. Preferable honest and without make-up, be it reputable or smiling. This has nothing to do with personal taste: so as not to lose favor with the public the automobile urgently needs a positive, sensitive image.

Paolo Tumminelli studied Architecture and Design Direction in Milan. He is Director of Goodbrands Institute for Automotive Culture, professor at the International School of Design in Cologne, publicist and book author.