I don't have much time to catch my connection in Linz. So, off I run down one set of stairs, back up another, take a deep breath, then a frenzied glance at the departures board. What's that now? Isn't there supposed to be a train to Salzburg? Why on earth does the board say "No to nuclear energy!"? I mean, I totally agree, but is this really the right place to air your thoughts on the nuclear power phase-out and its consequences, or on using solar-generated energy to feed the grid, or on wind turbines and their defacement of forests and fields? On the other hand, why not? After all, Deutsche Bahn is Germany's largest consumer of nuclear-generated electricity. But I'm in Austria and since a national referendum in 1978 thwarted plans for the start-up of the Zwentendorf nuclear power plant; this country has systematically refused to use nuclear energy.

Then comes the announcement: "'ÖBB IC 648 No to nuclear energy' is now arriving at Platform Five." And that is when I see it; it pulls in right in front of me – your average, run-of-the-mill train. The doors open. Then the pushing and shoving begins, and the aisles become full to brimming. Nothing out of the ordinary. No, this isn't some kind of special train for demonstrators who are heading to Gorleben to profess the will of the people or to chain themselves to the rails. But that well-known red sun on the yellow background smiles at me from the pages of the train brochure. "atomstopp – atomkraftfrei leben! is a non-profit, non-party anti-nuclear association based in Linz. We are calling for Austria's withdrawal from the European Atomic Energy Community –Euratom." I see! There's referendum going on. Meanwhile, a train departs from the opposite platform, its name "The Austrian Bar Association". Rather appropriate. The President of the Austrian Bar Association explains this coincidence on the association's website: "Our aim is to inform the public of our achievements as representatives of the law – train by train so to speak."

Austrian Federal Railways (the ÖBB) doesn't leave anything to chance. Especially not the names of its trains. For years now, they have been selling them to the highest bidder. And it has proved a very successful venture at that. Its long-distance trains are always fully-booked, meaning that such a marketing strategy costs up to 16,880 Euro a year, depending on the route. On regional routes, a train with your name on it, so to speak, will set you back 5,000 to 7,500 Euro. There are however concessions for those initiatives of "social interest". We are told that the ÖBB receives the most requests from the tourism industry, closely followed by the electronics industry and governmental ministries, vying for the people's favor. And so, "Careers with the Austrian Army" and "Experience Democracy", for example, can be seen throughout the country, travelling back and forth, several times a day. The education system doesn't come off too badly either: both Salzburg's Paracelus University and St. Pölten University of the Applied Sciences have taken advantage of the offer to attract potential students – catching them while still on a travel high from their journey. Indeed, Deutsche Bahn! Now wouldn't that be a great trick? Political education, direct democracy and a supplement for your income all in one. "Fiscal Stability Pact"? "Education is the key"? "Recession profiteers to pay up"? "Your personal details are yours, and only yours"? "Study in the Far East"? Ok, perhaps we are better off sticking to place names, even if it is a little unimaginative. 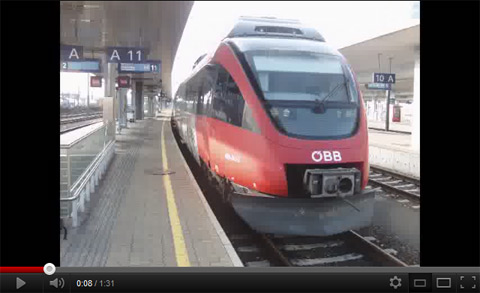 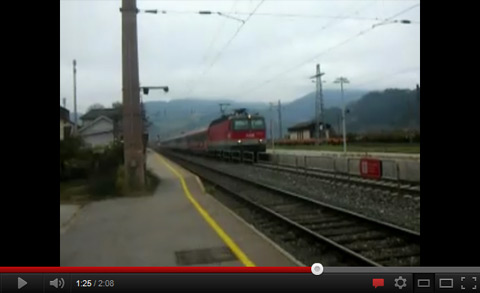