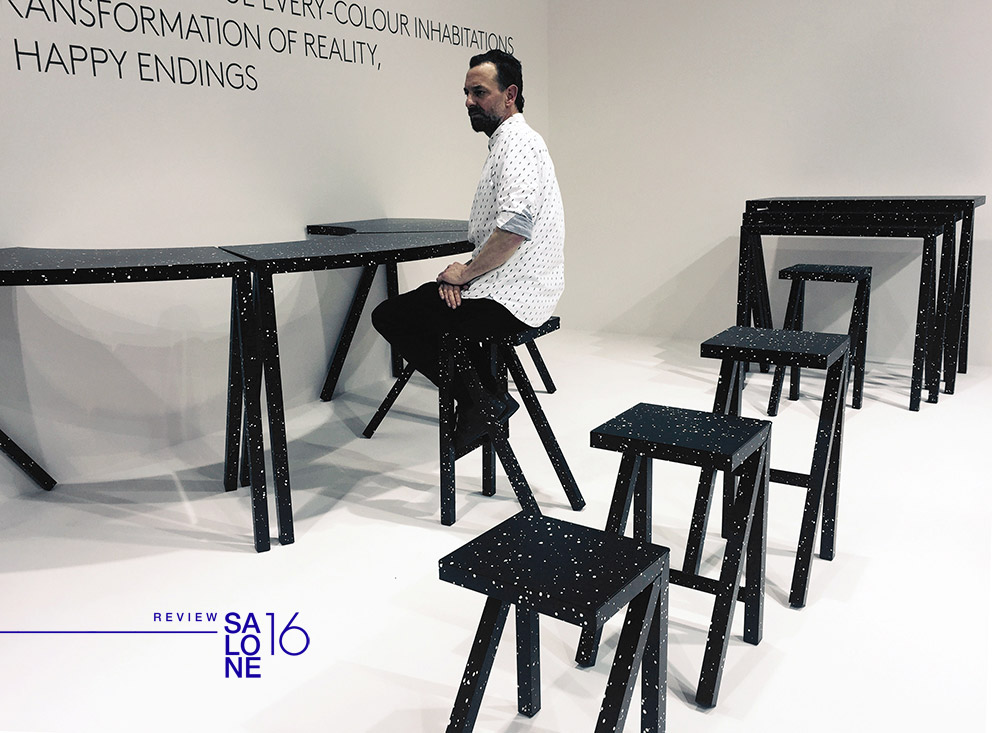 The designer Jerszy Seymour and his collection of stools and tables for Magis. Photo © Uta Abendroth

Jerszy Seymour is a difficult nut to crack. His design is highly individual and not always easy to like. Not eminently digestible for the “regular market”. The cosmopolitan, who was born in Berlin and grew up in London, aims to create situations with his design that challenge us humans to engage with the object, as well as with ourselves and our environment. Uta Abendroth spoke to the artist-cum-designer, 48, about humor, poetry and happy endings.

Uta Abendroth: Jerszy Seymour, in Milan you presented tables and stools with Magis under the name “Bureau for the Study of Vivid Blue Every-Colour Inhabitations of the Planet, the Transformation of Reality, and a Multitude of Happy Endings”. What statement did you want to make here?

Jerszy Seymour: I would say the title is less a statement and more a poetic invitation. The collection invites people to look at our future, at how we wish to live on this planet – and perhaps also how it looks inside our heads. “Vivid Blue” could be a higher power, emptiness, or the divine, and “Every-Colour” a multitude of carnal existences. The “Transformation of Reality” would be a form of evolution or revolution and the goal would be “Happy Endings”. Real happy endings can be fleeting. And the ambiguity of a happy ending in a massage salon or Walt Disney movie is intended to suggest both failure and success. In reality, however, we all pursue a state of happiness.

What is new about these objects?

Jerszy Seymour: Maybe nothing is… They are high stools and tables, made using standard welding technology and with a small rotation in the geometry of the legs. The position of the struts with the mottled surface finish is intended to strip the objects of all material reality and instead make room for projections. The tables and chairs create a flexible work environment, a convivial situation that can be seen as a metaphor for social and individual organization.

What made you choose aluminum for them?

Jerszy Seymour: It is very lightweight and robust, can be recycled and defies the elements. Meaning, the furniture can be used both indoors and outside, be it on the street or under a tree.

Generally speaking, your products aren't particularly conceived for the conventional market. Whom do you have in mind when you design something?

Jerszy Seymour: Depending on the context, regardless of whether I’m working at an institution, an art gallery or for a company, I work on different levels as far as complexity is concerned. But I am always interested in what touches people's soul and where that could take us. For me this “conventional” means that little something extra about an object, something that can touch us all deep down – as Shakespeare says in “The Merchant of Venice”: “If you prick us, do we not bleed?”

What does reality mean to you in the design process? Or is it much more about visions?

Jerszy Seymour: Hmm… reality and visions. The three main ideas I use to explain my work are the following: First, the idea of the not-total Gesamtkunstwerk, or not-total total artwork – which is one way of viewing a totality without being totalitarian. Second, the idea of every-topia, a way of simplifying the modern approach to the here and now and the readily available. And third, the concept of humor – how can you make someone laugh? That is a way to avoid dogma and work towards getting a giggle in response. In a way my works stand firmly with their feet in reality – look at the standard-welded aluminum tubes. Yet they are also intended to serve as prototypes, as user manuals and memos with regard to possible realities.

How do you begin a project, what sparks it?

Jerszy Seymour: Nowadays there is certainly a logical sequence in my works, a kind of constellation, which opens up precise spaces to tackle something. Then I look at the context – an exhibition space, a mountain, an industry – and figure out what fits it. Of course I always have my sights on the goal.

You regularly organize workshops. Does this work inspire you?

Jerszy Seymour: I generally question my role as creator of situations, which is why people are fundamentally important for the projects. In terms of my early series of exhibitions on the “Amateur”, where I worked with wax, these were exhibitions in the form of workshops. Leading on from this, four and a half years ago I co-founded the “Dirty Art Department”, a Master’s program at Sandeberg Instituut in Amsterdam, of which I am Director. We have a great number of students and alumni with enough energy to send rockets into space. During the Salone we organized a four-week performance in cooperation with Centro Sociale Macao entitled “The Wandering School” – in fact, I don’t believe I’ve ever seen anything quite so astonishing.

You have a multicultural background and live in various cities. How does that influence your work?

Jerszy Seymour: It means that the idea of nations is okay if you are talking about cheese and wine, but not about national borders.

What would you do if you didn't work as a designer?

Jerszy Seymour: I'd lie in a Jacuzzi in the mountains and look at the stars night and day.