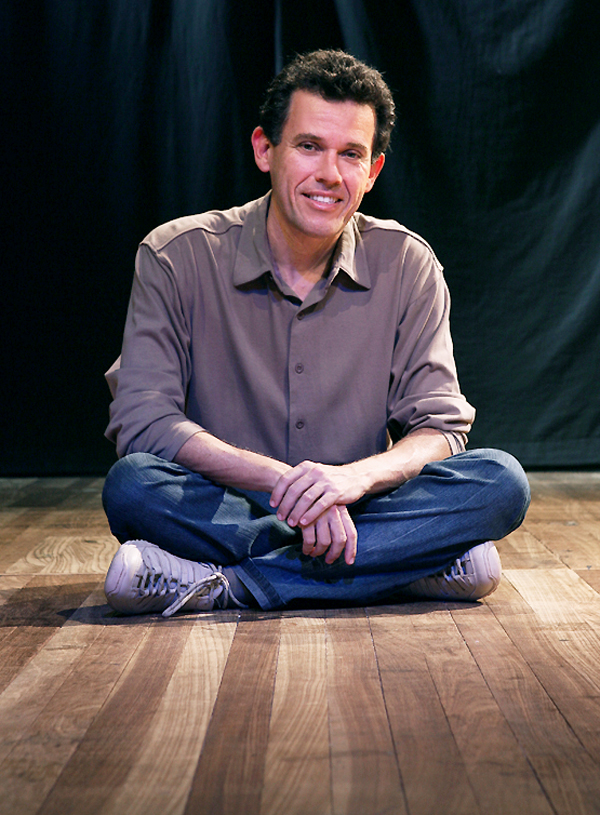 There’s a great Jewish joke that goes: “Mo was a lousy student, but his cousin Danny was best of class. Later everything Mo touched turned to gold, whereas Danny didn’t get far. When Mo then went on to win the lottery, Danny lost the plot and ran to his cousin: ‘And now you’ve won the lottery, too! So tell me how you manage to do it.’ ‘Well,’ Mo answered, ‘if you really want to know, then I’ll tell you. The night before I bought the lottery ticket I had a dream. A choir of angels sang in sweet voices, seven rows, each with eight angels. So I immediately knew what to do and the next morning bought the ticket ending in 63. Pretty simple really.’ ‘But Mo, eight times seven isn’t 63, but 56!’ –‘Really? Well there you go,’ said Mo, ‘You’re simply better at math than I am.’”

You’ll find the joke in the chapter on “Wisdom – The Apparent Realm of What is Apparent” in the book “Der Rabbi hat immer Recht“. The author,Rabbi Nilton Bonder, explains: “Danny wants to manage everything by reason; and he even wants to subject intuition to reason. In the process he fails to understand there are areas in life where the solutions are to be found in ‘nothing’, where Mo is superior despite being worse at math.” And he adds: “In that world, where naivety and foolishness can quite suddenly bring individual aspects of knowledge to light, a real fool has a better chance of persevering than half a genius.”

The art of solving problems

Whether the rabbi si always right doesn’t really matter. As Bonder’s deliberations don’t involve who is right or wrong, but how to solve problems, how to understand the world and yourself. And as far as this is concerned, the Jewish tradition has a lot to offer from which we can learn to see things from a different angle. If Bonder talks of the “art of solving problems” then he doesn’t mean a particular method. He doesn’t want to write yet another self-help book for the stressed staffer or the burned-out manager. He tells all sorts of stories, analyzes them, and then develops a system of relating knowledge, understanding, wisdom and faith to four different and yet interlinked realms, or, put differently, to four dimensions of reality.

Bonder describes the first realm, in which “the apparent is apparent” as the dimension of human knowledge, in which things lie before us clearly and objectively. It is the world of reason and we usually get on pretty well in it with our knowledge and logic. As long as we don’t forget that there is nevertheless any amount of things we don’t know and don’t get stuck in rigid patterns of thought. A Jewish proverb would have it “the one or other person may worry about his appearance, but not about his mind.”

In “the hidden realm of what is apparent” the focus is on essentially revealed things and above all on the awareness we have of them, whereby something obvious remains hidden from us. In this more emotional world we gain a picture of the realm of things around us we don’t know in order to keep our souls in balance. Often we can first grasp or explain something if we reframe it, see them from a different angle. Once we’ve overcome the obstacle and have at long last understood what it was all about, we feel like exclaiming “Why didn’t I see that before?”

In the third “apparent realm of what is hidden” is the world of wisdom, where we encounter the unconscious. In this dimension of reality, the hidden is only to be discerned in outline or dream images and then defies our knowledge. A bit like the choir of angels in Mo’s choir. This is a realm where you can achieve more by intuition than with mere knowledge, a realm in which it helps little to focus on a specific goal if the real goal only emerges once “the arrow has already left the bow, and the target in some absurd inversion or reversal has to seek the arrow that wants to make its mark.” In the world of wisdom, the impossible is quite possible and is full of paradoxes and absurdities, as the following tale by Yiddish author Sholem Alechem shows – one of many he tells about a village called Chelm:

“Two men from Chelm went for a walk. One took his umbrella along, the other didn’t. After a while it started to rain. ‘Open your umbrella!’ exclaimed the man who didn’t have one. ‘That won’t help,’ said the other. ‘What do you mean it won’t help? It’ll protect us from the rain.’ – ‘It’s as full of holes as a sieve.’ – ‘So why did you bring it along then?’, the first man asked, perplex. ‘I thought it wasn’t going to rain.’”

While the tangible was somehow always present in these first three realms, when we enter the fourth, “the hidden realm of what is hidden” we enter terrain where “our judgment does not provide us with any grounds for action.” Surprisingly, Bonder describes this world of faith as one we can penetrate not by our reason, but by actions. By reversing the relationship of understanding and action Bonder covertly links Jewish tradition to insights into second-order cybernetics. What first requires explanation (the hidden) can, Bonder suggests, “first be imbued with meaning and analyzed in the sphere of action. Just as when the Rabbi of Kozk asks: ‘What does the commandment ‘You shall not steal?’ mean. ‘Simple,’ replies a pupil, ‘it means ‘Don’t take something from your neighbor.’ ‘No,’ retorts the rabbi, ‘it means don’t take anything away from yourself.’”
Not taking anything away from yourself means remaining completely open. “Anyone who does not remain open to life but shies back from forgoes fundamental insights into himself and life, knowledge that cannot be acquired rationally.”

Beyond all cheap advice such as can be acquired in any station bookstore the “Yiddishe kop” teaches us how to tackle certain issues unconventionally or to look for the right question to an answer we already have – and the reader will constantly be gob-smacked by how differently it allows us to think and act. The rub of it is “the ability to let problems keep coming at you until such a time as they have achieved a critical mass.” Once they’ve assumed dangerous proportions, “or so the Yiddishe kop knows, they trigger a truly existential process in our minds: You suddenly ask whether what is usually considered impossible is actually all that impossible.”

When you finish this book with all its practical insights into mastering life you will well understand what a marvelous, intelligent change in perspective the right Jewish tradition offers, what problem-solving abilities and deep wit have evolved from thousands of years of living under threat. The reader is playfully introduced to many useful experiences and strategies that the “Yiddishe kop” has to offer to swiftly grasp complex situations and view them from a completely new angle. And the stories Rabbi Bonder has chosen are a refreshing read. Why not, in order not to bang your head against a wall, simply take an umbrella with holes along with you, because you think it won’t rain. 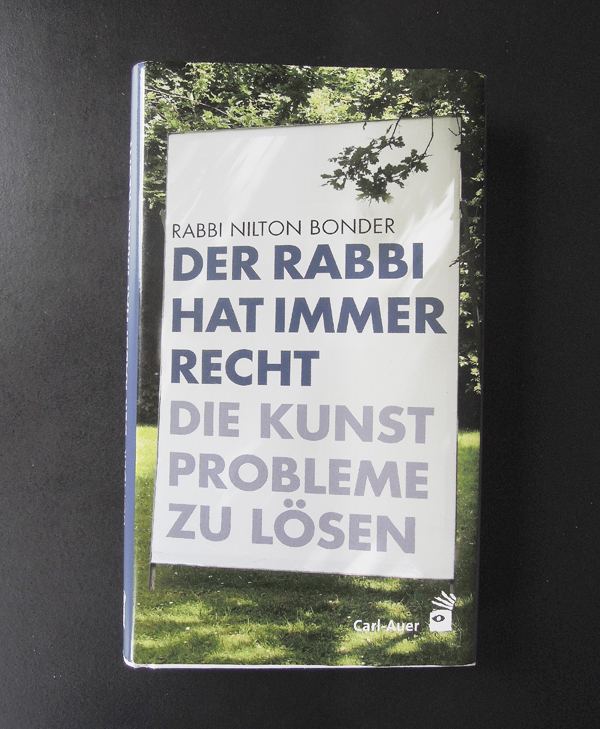 “Keep coming problems at you until such a time as they have achieved a critical mass” is one of Rabbi Bonder’s lores. Photo © Carl Auer Verlag 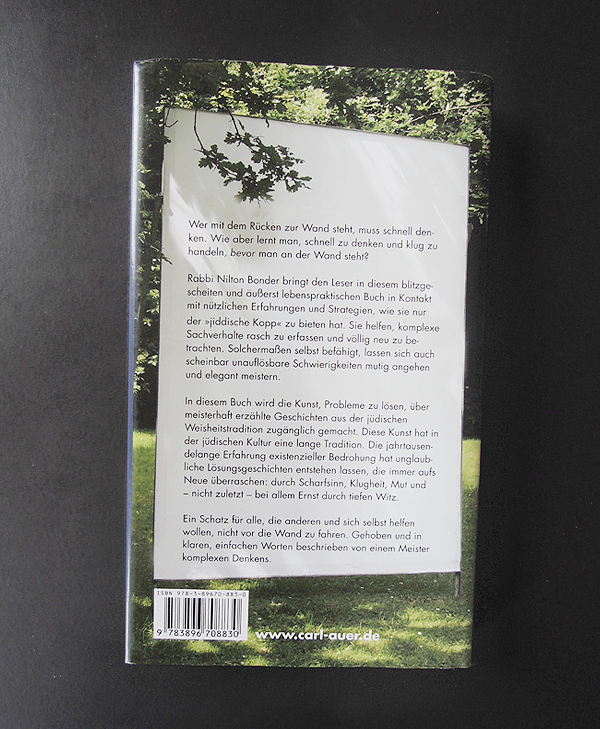 Problem-solving abilities and deep wit have evolved from thousands of years of living under threat: “The Yiddishe Kop”. Photo © Thomas Wagner, Stylepark
Advertisement