top
When apartment blocks are built of asparagus
by Sandra Hofmeister | Jul 9, 2012

A huge banana floats above the pavilion roof in Munich’s Olympiapark, high up in the air, hanging like a hammock suspended between two gigantic, leafless tree trunks. Next to it green asparagus spears with little windows tower up into the sky, while a helicopter lands on the platform provided by a colossal sweet potato that has been cut open. Terunobu Fujimori’s post-apocalyptic vision provides an extremely succinct image for the Bavarian capital. Munich is now the vegetable city! Nature has conquered the urban space and grown into a man-made life form – with a banana theater, asparagus housing blocks, and an onion school. “In 100 years, when there is nothing left to eat, at least we will be able to feed ourselves with our homes,” says the Japanese man in his quiet, calm way, before chuckling and asking that we don’t pose any questions about the details of this vision.

Terunobu Fujimori is an architect and architectural historian, a lateral thinker and surrealist. The buildings and imaginary worlds the 65-year-old designs are depictions of dreams in which the archaic and the futuristic come face to face. This longing for nature and a mysterious realm beyond it provides the meditative guidelines for Fujimori’s unusual works. The esteemed scientist only discovered his passion for design and building at the age of 44 and all of the buildings he has designed thus far are found in Japan. Now, Hannes Rössler has curated the first major show of his work in Europe, which is being held at Munich’s Villa Stuck.

Spindly tree trunks and bare branches permeate Fujimori’s buildings like sacred symbols. Enclosed in hand-cut slates or planks of flamed cedar, dandelions or chives blossom on some of the roofs. The materials that Fujimori uses to disguise the reinforced-concrete core of his buildings are just as unusual as their down-to-earth workmanship, made by the architect himself together with students, friends, children and other laymen right there on the construction site.

His first building, the Historical Museum belonging to the Moriya family of priests in Fujimori’s home village in the prefecture of Nagano, is enveloped in a layer of mortar, straw and chestnut wood taken from the surrounding forests. In 1995, the finished building caused a wave of controversy in Japan. “For an architect familiar with Modernism, Fujimori’s building looks like the work of a madman with very curious taste,” commented Toyo Ito on the castle-like building; he was nonetheless deeply impressed, as were many of his colleagues. In Fujimori’s designs mountain and river, grass and tree all find their way to one another. The crude wooden exterior conceals an earthquake-proof, reinforced-concrete core and appears both familiar and nostalgic at the same time. In the building’s interior, the various rooms open up like meditative caves made of packed earth.

Fujimori has been creating buildings for over 20 years now – and each year there is another to add to his collection. He has already built student residences and thermal baths, as well as residential buildings and teahouses that look like rickety birdhouses balanced on stilts high in the air. “I don’t want to create buildings that already exist, and I want to use natural, untreated materials in the process,” reveals the architect and comes across relaxed and modest as he does so, even though his aspiration is anything but. Buildings without references, that have no role models, adhere to no typologies and are by no means subject to the boundaries of our imagination – can such buildings even exist? Dreams are also nourished by recollections and associations with that which already exists, they are interspersed with citations and mindscapes, which they interpret and which lend them a new shape. So this much is for sure: Fujimori’s buildings have not simply dropped from the sky. In essence, the longing to become one with nature and to discover a kind of metaphysical other world remains nothing more than wishful thinking, which in architectural reality is translated into a kind of camouflage or packaging to conceal modern building methods. All the same, Terunobu’s designs are more than mere façades, because they were born of a dream that is fundamentally human and is continually inspired.

This correlation is most clearly manifested in Fujimori’s teahouses. These tubby or cumbersome primitive huts, set up in the air on rickety stilts or in boats on water, are fitted with fireplaces and tatami mats and provide the perfect setting for meditation and relaxation. His own teahouse, the tagkasugi-an, sits more than six meters above his vegetable garden on two bare chestnut tree trunks. The reduced interior is surrounded by crooked walls which direct the gaze from the fireplace out to the Chino Valley. “The most wonderful thing is the way it sways when you step inside,” says the architect, describing the poetry of his “too-high teahouse.” “The tea ceremony can only begin once everyone has settled down.”

Perhaps the time has come to put a stop to this belief in progress and technology, as expressed in the sleek high-tech finish of Japan’s glass-and-steel architecture, and come back to people and nature. “I am pretty sure that Fujimori’s architecture is only possible because there are people who share his dream of flying off to a more magnificent natural realm, which might just exist somewhere beyond the real nature we know,” writes Toyo Ito in the catalog that accompanies his friend’s work. Ito identifies abstraction as a creative technique that finds expression in Fujimori’s buildings. He concludes his essay with the sentence: “After the earthquake disaster in 2011, I would really like to share this kind of abstraction with Fujimori.”

Architecture
Exhibitions
Made in Japan 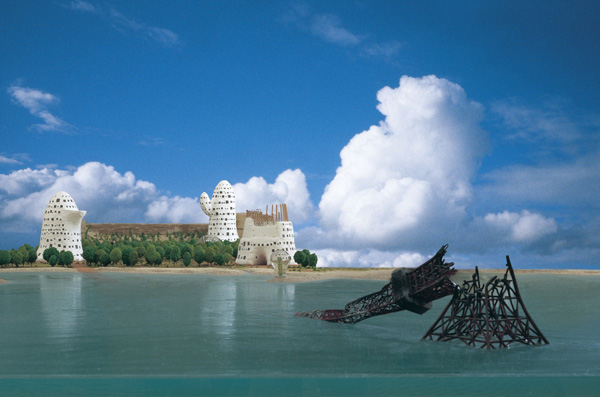 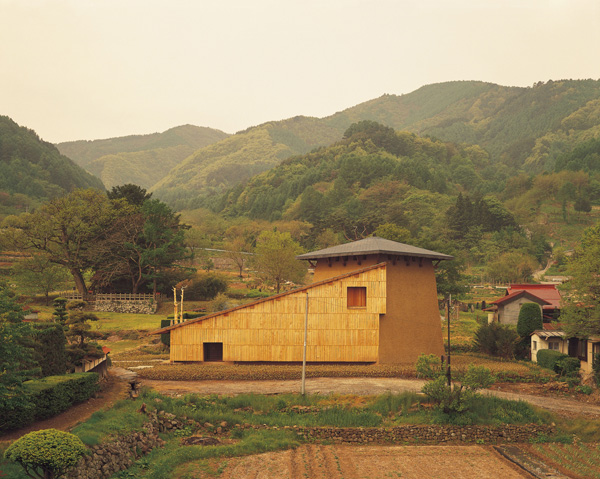 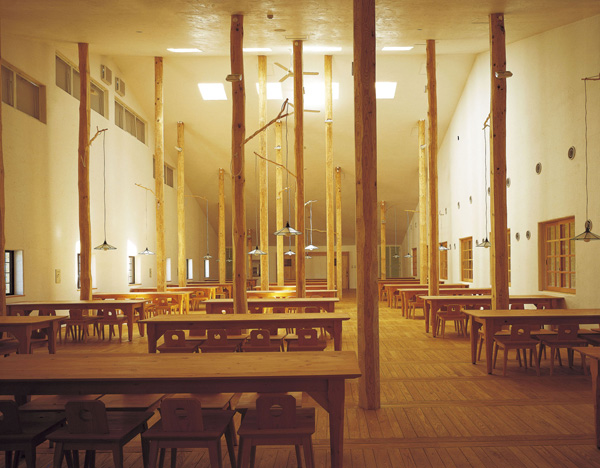 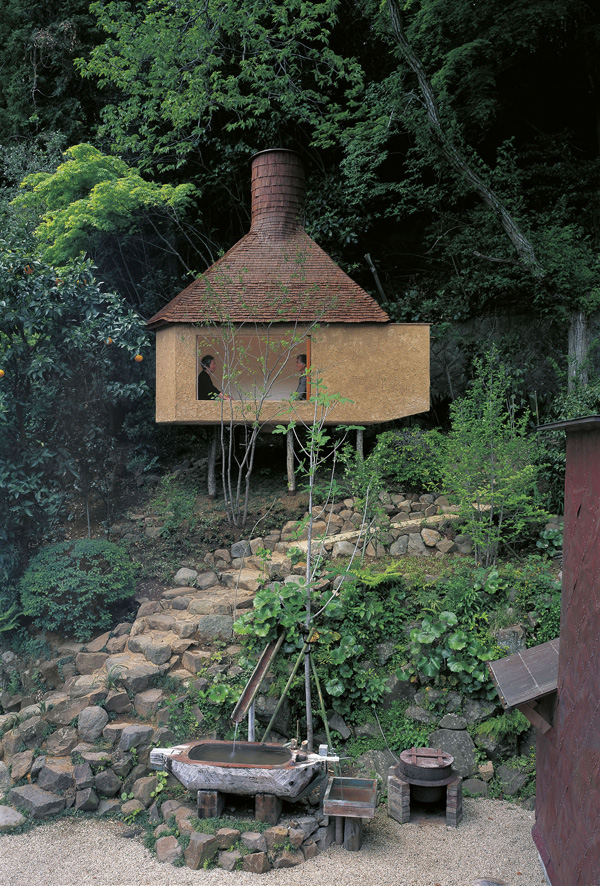 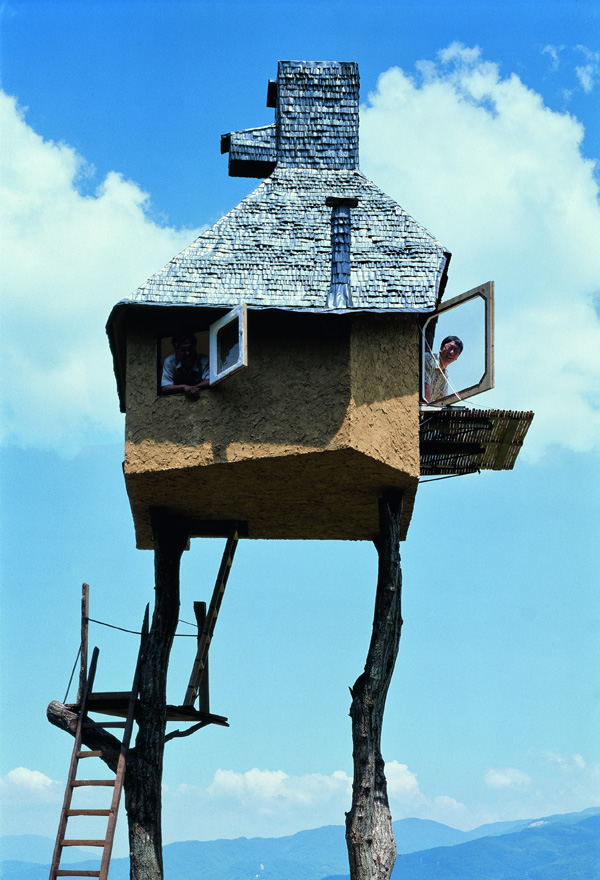 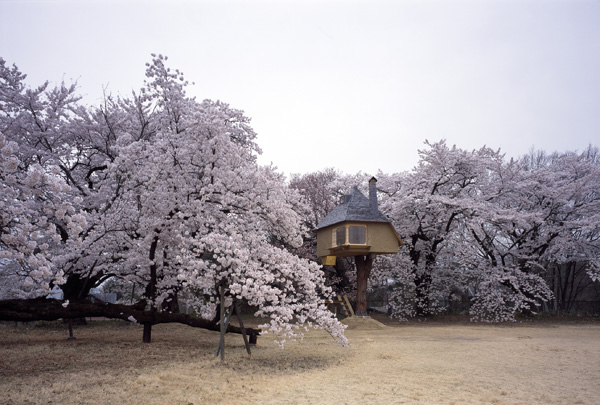 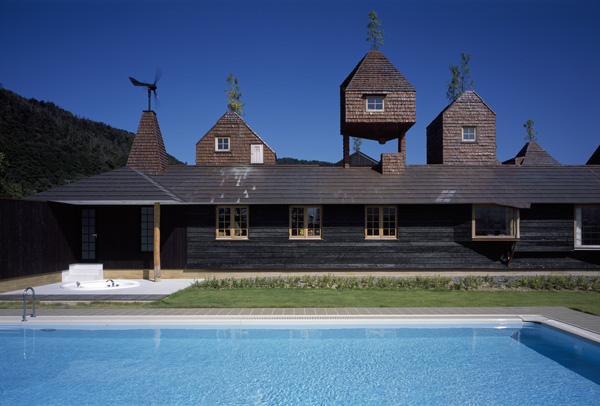 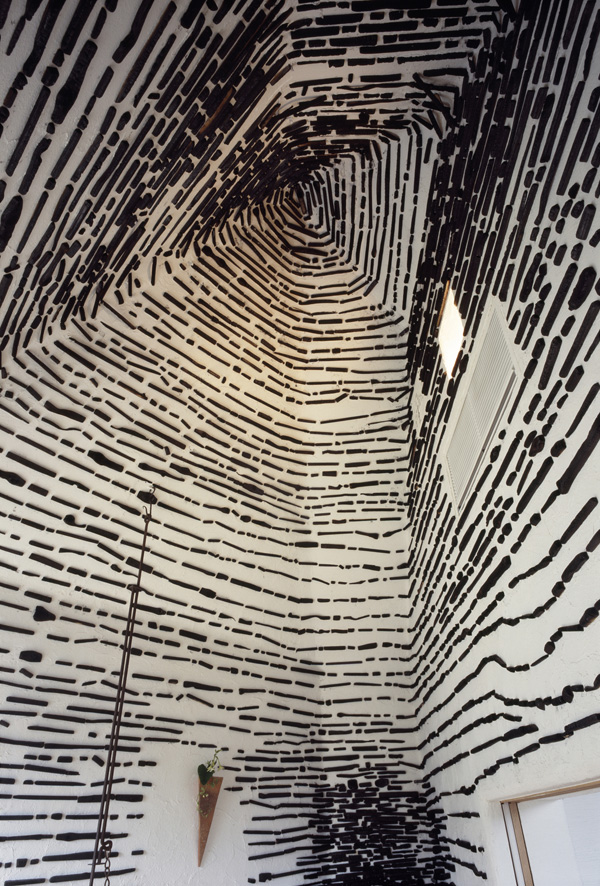 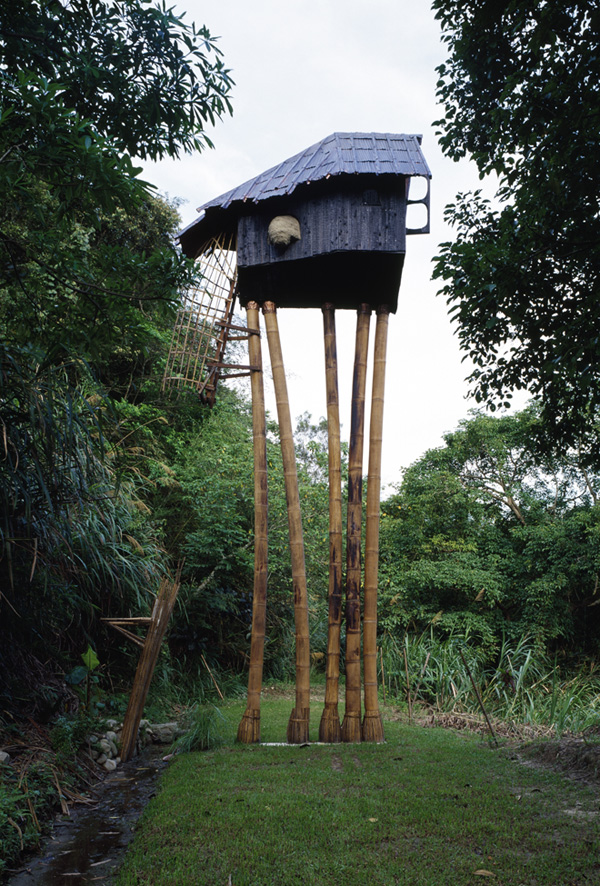 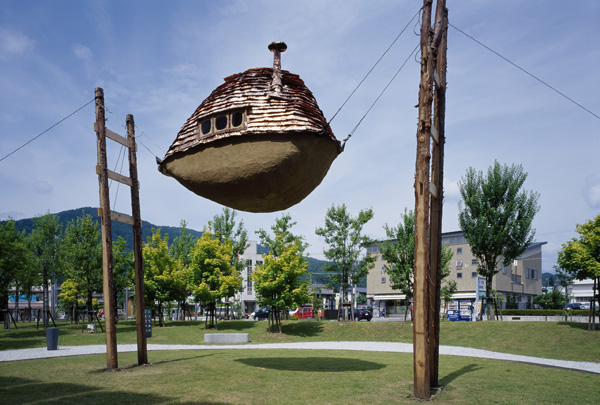 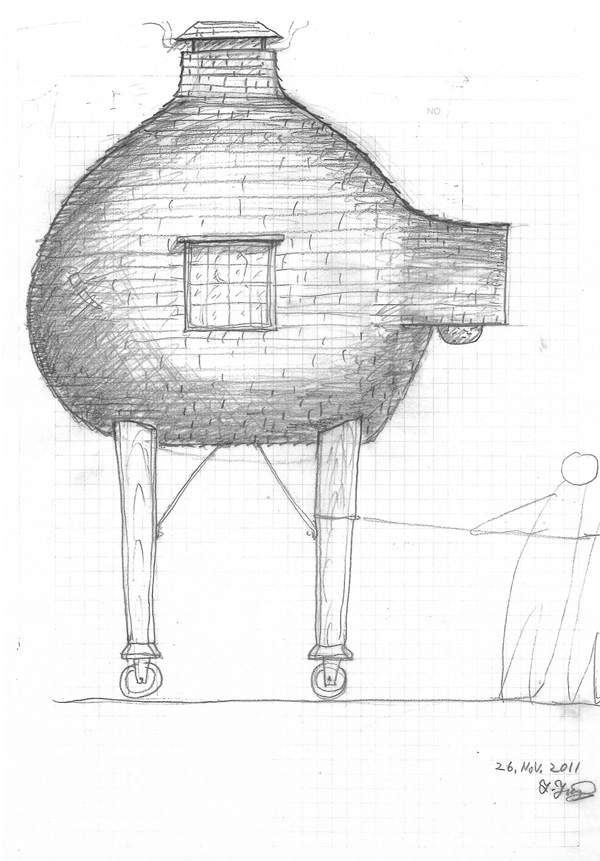 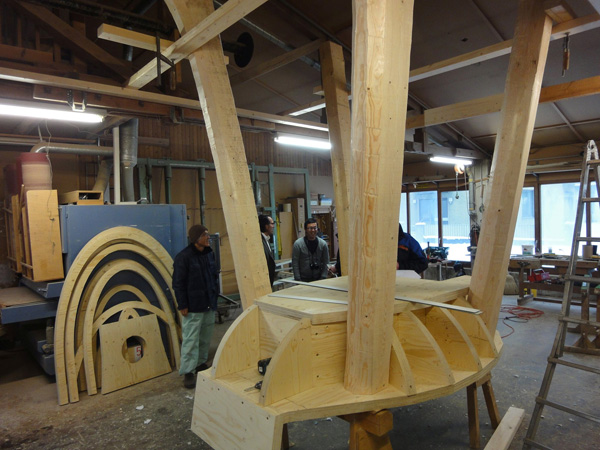 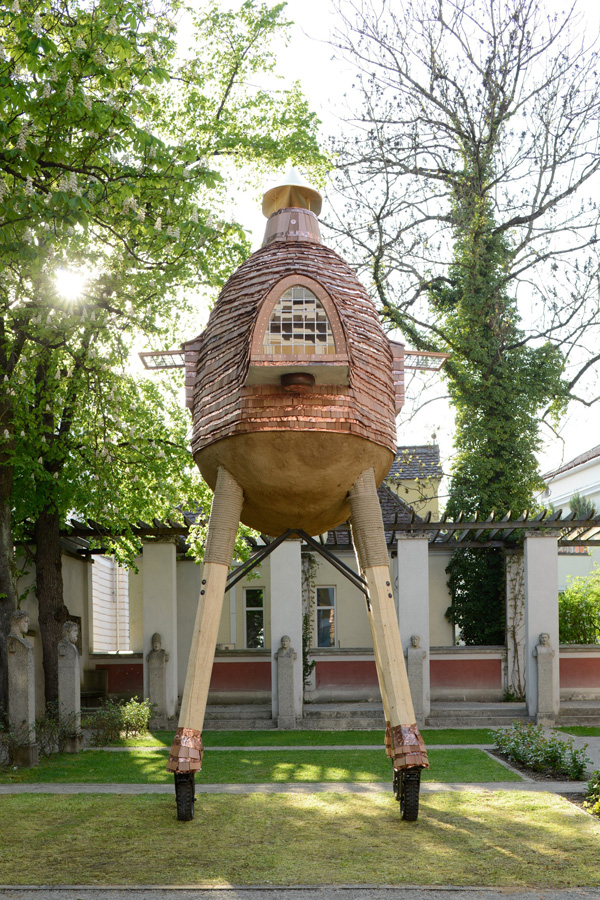 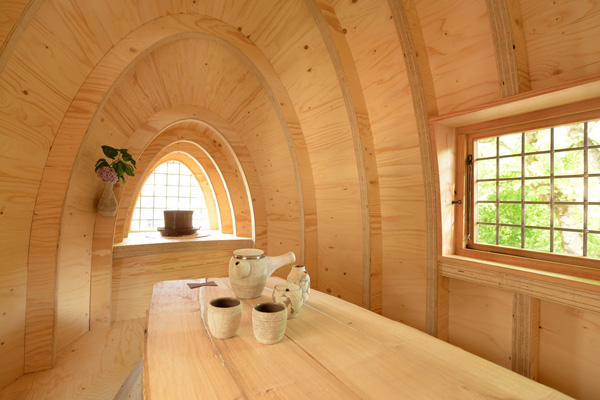 The Interiour of the Walking Café, photo © Bernd Schuller 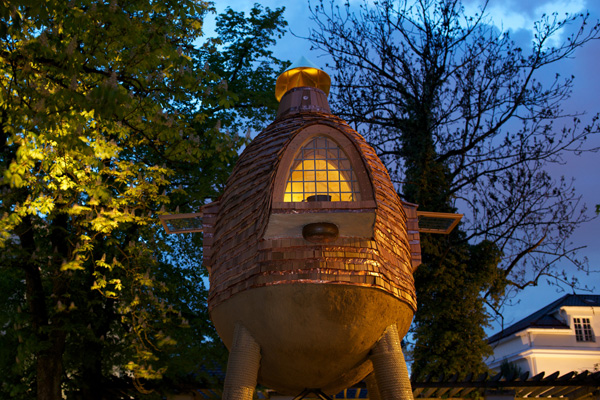 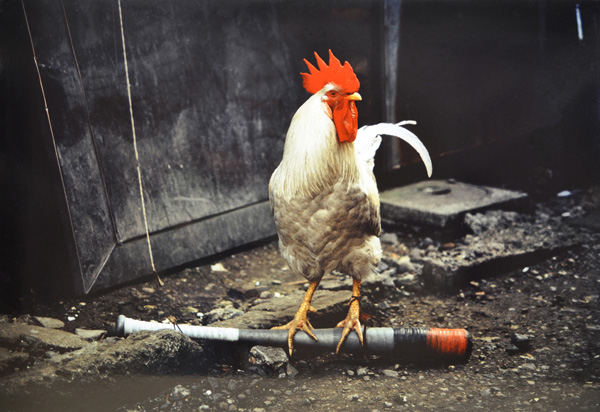 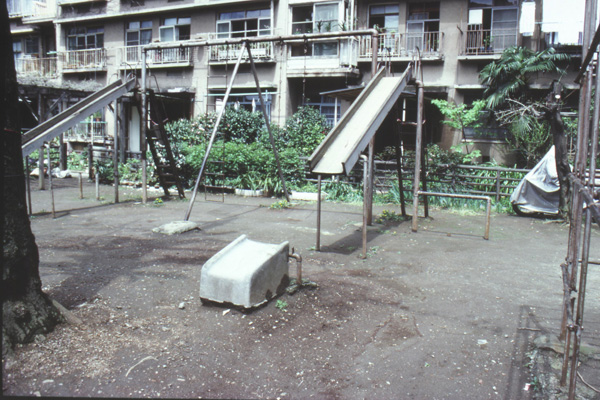 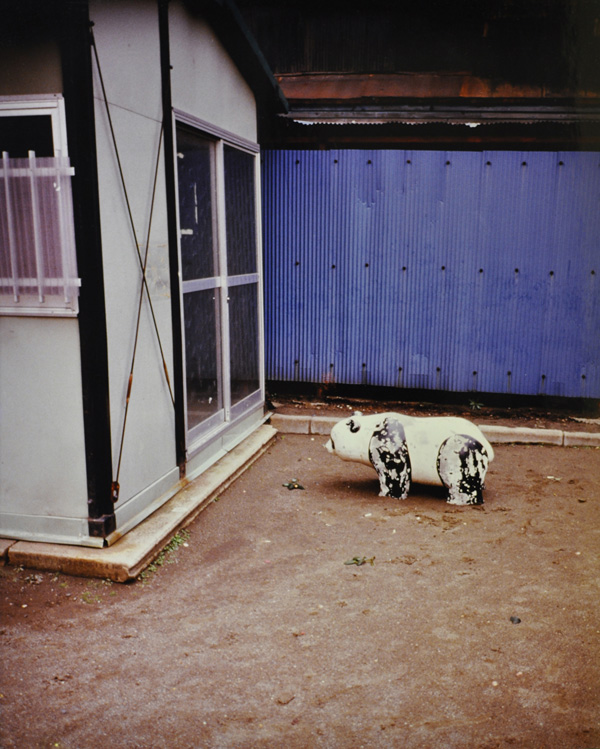 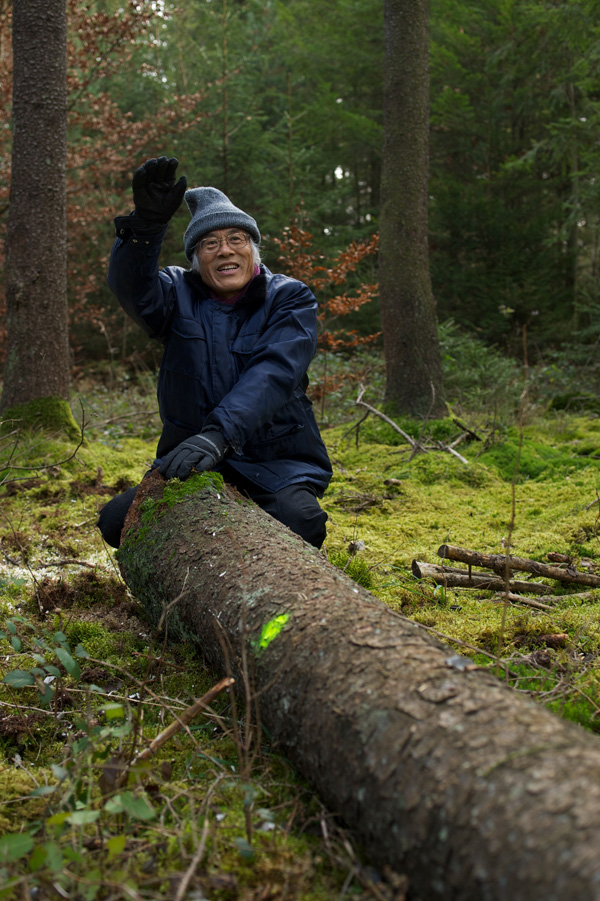